Geneva is not the most attractive of the cities I have visited in Switzerland (like Bern, Zurich and Lucerne) but beyond the designer watch ads atop the lakeside buildings and Geneva’s ‘mountain’ looking more like a rocky ridge, from where I was standing, I found a delightful Old Town and two worthwhile excursions to fill my two days perfectly.

On the first full day we boarded an early boat, the S/S Simplon, from the Quai Mont-Blanc and headed off under rather cloudy overcast skies for an hour and three quarter lake cruise to Yvoire on the southern shore of Lake Geneva.

Whenever she can Milady hopes to travel in style 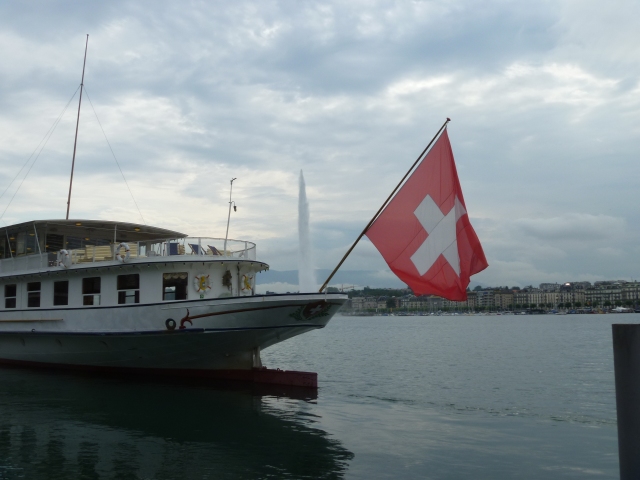 The S/S Simplon leaves us at Yvoire

Yvoire is in France but there are no passport controls or inspections it was just straight off the boat into the Restaurant du Port (the name tells you where it’s located) and lunch was served!

The proposed return sailing was cancelled which meant a 3 hour stay at Yvoire and you can only spend so long eating lunch. This attractive little medieval town was full of tourists so we two decided to take a walk to the next stop and pick up our boat from there later.

After inspecting the little shops we set off to find the footpath to Nernier. (Sounds like something out of C. S. Lewis.) It was a most pleasant walk along shady paths and tracks past interesting houses but with minimal views of the Lake, unfortunately. We came across a lovely wildflower meadow, visited an old church and arrived at Nernier with lots of time for people-watching at the port until the Simplon arrived on the dot at  5.37pm.

The small beach at Nernier

The next day I made a morning visit to the Old Town. There are some steepish climbs and lovely cobbled paths and streets and I enjoyed browsing in a secondhand book stall on the way and at a second hand book and prints shop on the Grand’Rue. There are some delightful street cafes for outdoor refreshments and the Cathedral is situated there. There’s a great view from the tower but we didn’t go up. It’s a lovely area for a bit of “flaner“. 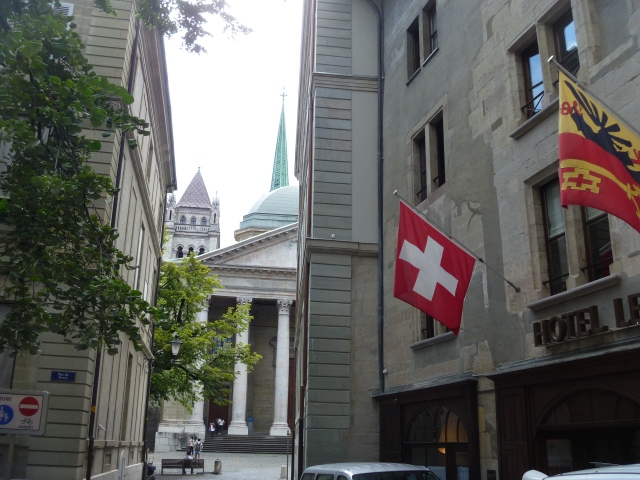 I can only take so much aimless wandering interspersed with breaks for tea or beer so in the early afternoon I took the bus out to the residential suburb of Cologny. My purpose was to visit the Martin Bodmer Library and to try to find the Villa Diodati, the former home of Lord Byron and now a private residence.

The Bodmer Foundation is fantastic! It’s one of the biggest private libraries in the world and the breadth of the display is simply breathtaking. There are samples of the written or typeset word from the earliest times – Greek papyrus fragments, the oldest manuscripts of St John’s Gospel – to ‘modern’ American first editions – Ginsberg, Steinbeck, Faulkner, Hemingway – and everything in between. And not just literary but medical, scientific, music. There’s a Shakespeare 1623 First Folio and an early Chaucer Canterbury Tales. All displayed in a modern, subtly-lit underground gallery on two floors designed by Swiss architect Mario Botta.

From the Bodmer gallery it’s a 10-15 minute walk to the Chemin de Ruth and number 9, The Villa Diodati.

First I found the entrance gate and a bit further along the road is a meadow with seats and a view over the lake and towards the city. It’s called ‘Le Pré Byron‘. An Information Board welcomes you to the spot and explains :

“On this very spot the story of ‘Frankenstein’ was born. During the summer of 1816, the weather was atrocious, cold and rainy spells alternating with violent thunder storms. At that time, Byron, a 28 years old poet , was renting the Villa Diodati to the left of this meadow. … Mary Shelley was also spending the summer at Cologny at Jacob Chappuis’ home situated at the lower end of Montalegre, below where you are now standing. One evening at the Villa Diodati Byron and Mary Shelley made a bet as to who would be the first to write a horror novel. Mary became excited at this idea, completed the story of ‘Frankenstein’ a year later in England and won the bet.”

As you walk down towards the lake the house becomes clearly visible.

From the lake side it’s an easy bus ride back into town.