I’ve moved on down to Aldeburgh a lovely little seaside town on the Suffolk coast. For a coastal resort it’s a funny place – it kind of turns its back on the sea – as walking down the High Street you would not believe that beyond the shops on the east side is a beach and fishing shore.

Aldeburgh has a local Landmark Trust property. It’s about a mile out of town and it’s a Martello Tower.

“This is the largest and most northerly of the chain of towers put up by the Board of Ordnance to keep out Napoleon. Built in the shape of a quatrefoil for four heavy guns, nearly a million bricks were used in its construction. It stands at the root of the Orford Ness peninsula, between the River Alde and the sea, a few hundred yards from Aldeburgh.” From The Landmark Trust website. 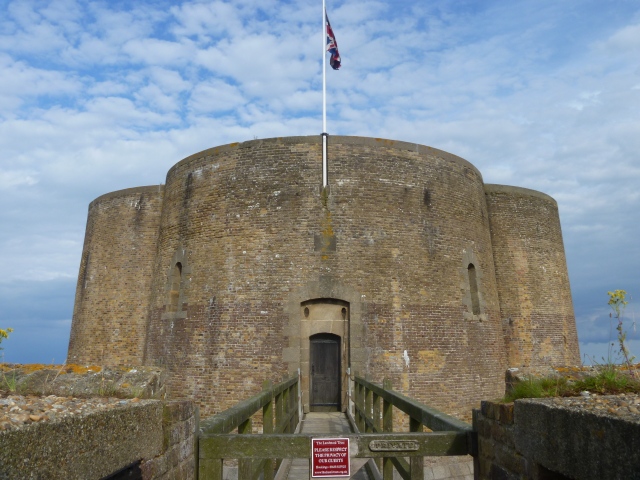 To me the exterior has very little appeal, the beach nearby is very stony and rocky and it’s a long old trudge from the town but I understand it’s possible to reach the roof from inside so there is somewhere outside to sit in privacy and enjoy a sea view so maybe it has something going for it after all.

Just a couple of miles north of Aldeburgh is the quirky resort of Thorpeness. It seems to be having a revival these days.  When I visited one summer a couple of decades ago the place seemed rather quiet and run down but today children (and some adults) were enjoying rowing and sailing on The Meare and the shops and pub seemed buzzing.

Thorpeness was the brainchild of Glencairn Stuart Ogilvie the owner of nearby Sizewell Hall. He bought an area of coast and dunes and in 1910 set about establishing a purpose-built resort based on the fishing hamlet of Thorpe. He changed the name to Thorpeness. Like Aldeburgh Thorpeness also turns its back on the sea.

The Beach at Thorpeness

The main attraction for children and adults alike seems to be The Meare a manmade lake covering 64 acres with scattered islands and at no point deeper than one metre. The islands feature playhouses and characters from children’s books, in particular Peter Pan – Ogilvie was a friend of J M Barrie. The Meare opened in 1913 and many of the boats are 100 years old!

I had a leaflet outlining a trail around the village which included the Golf Club, the famous House in the Clouds, the windmill and the other eccentric and quaint seaside houses and cottages. It was good to follow the trail and see that the village was experiencing a resurgence in popularity since my last visit. Read the newspaper article that inspired me to revisit Thorpeness here.

The Former Water Tower – The House in The Clouds

The Boat House with Clock Tower

We missed many of our ports-of-call on our brief visit to the Suffolk coast this year but we did manage to get to one of our favourite places – Snape Maltings. This year we joined a River Trip on the Enchantress for a 45 minute cruise down the River Alde to Iken church and back. The highlight was seeing a family of harbour seals.

But on dry land I love to re-visit The Family of Man by Barbara Hepworth. It’s  such an evocative sculpture standing between the great concert hall of the Maltings and the acres of reed beds that so characterise this estuarine part of Suffolk.

“Snape Maltings, [Barbara] Hepworth, Family of Man, 1970, group of three from the larger series, presented in memory of Benjamin Britten, wonderfully sited. The abstract – totemic appearance of the figures further suggests a non- western – timeless iconography, looking back to Hepworth’s earlier interest in Mexican sculpture and pointing to the universality of sculptural language across cultures.” ( http://www.racns.co.uk/trails/Ipswich_Southwold.pdf )

Then on the beach between Aldeburgh and Thorpeness is Maggi Hambling which I also love to revisit – but didn’t actually fit in on this visit. I was last there in February 2010.

“Aldeburgh, Beach, Scallop to celebrate Benjamin Britten, Maggi Hambling, with Sam and Dennis Pegg unveiled 8 November 2003, I HEAR THOSE VOICES THAT WILL NOT BE DROWNED; fine tribute, intensely disliked by most locals.”  ( http://www.racns.co.uk/trails/Ipswich_Southwold.pdf ) How strange is that?

14 comments on “Some Suffolk Curiosities”