Naulakha has been wonderfully restored and there are a great many original furnishings and fittings, as I have mentioned already. In addition there is a barn set  out like a museum with Kipling-related artefacts and display cases in the second floor attic showing some of the smaller stuff.

I imagine that the Bliss in the title must come from the name of the cottage in which the Kiplings lived,  just down the road in Brattlebooro, whilst Naulakha was being built and where baby Josephine was born but also from the fact that Rudyard states that his Naulakha days were the happiest of his life. His second child, another daughter, Elsie, was born at Naulakha. 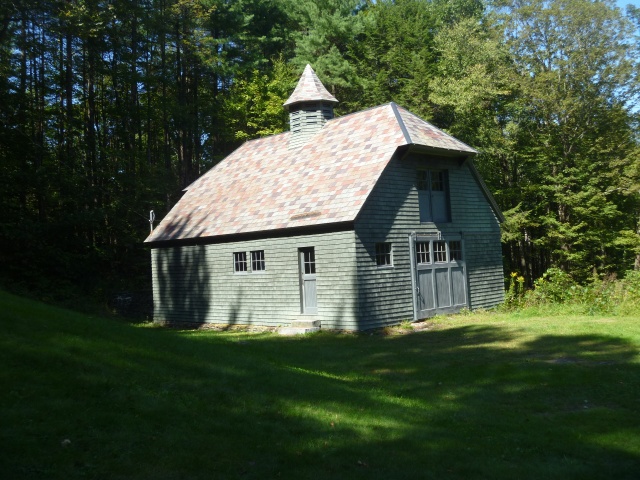 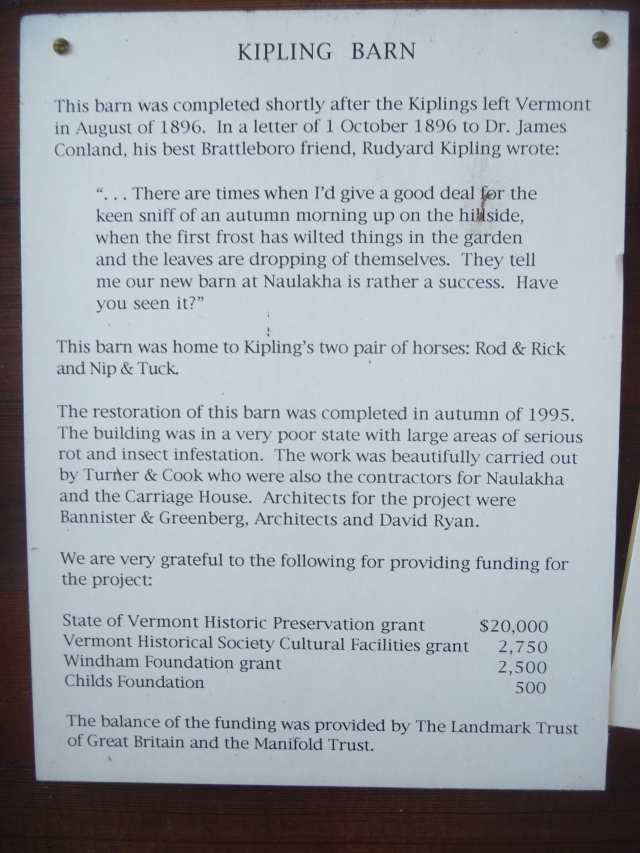 Note the very strong connection with British Landmark Trust. All of their properties abroad – in France, Italy and Naulakha – have British connections. 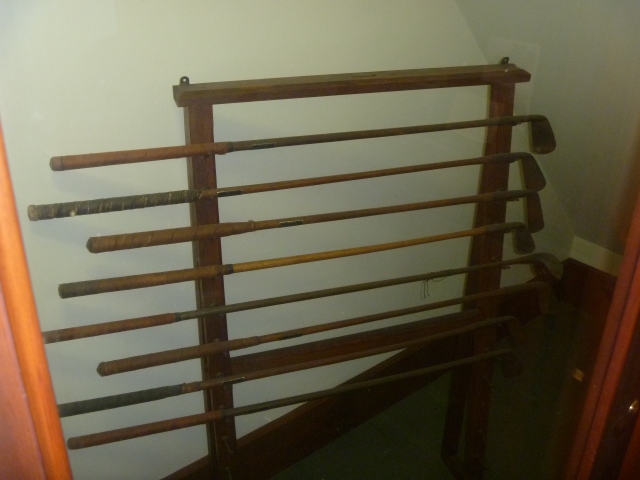 In the attic are a set of Rudyard Kipling’s golf clubs. These must once have stood in the Entry Hall or Loggia as the House Tour states :

The golf clubs and rack are Kipling’s also. According to the United States Golf Association, Kipling invented “snow golf” here in Dummerston. 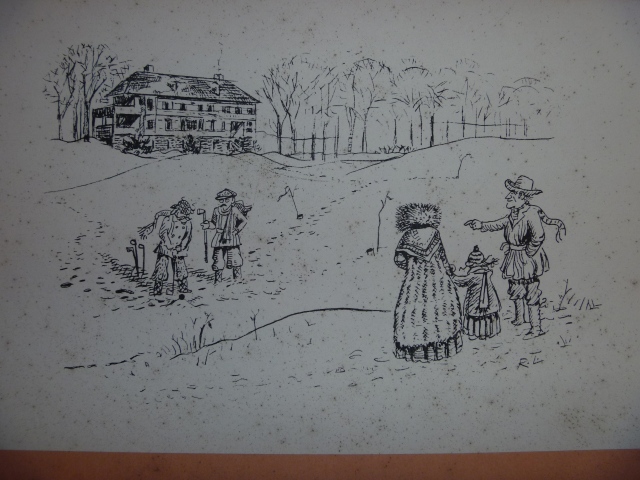 The giant sled, “Red Phaeton”, stands in pieces in one of the abandoned horse boxes.

The Barn Museum really puts the story of the Kiplings and their time at Naulakha into perspective. Mostly it’s told on storyboards with copies of illustrations and typed out quotations.

There is more memorabilia in the Attic Display Cases.  Not everything dates from the Kipling era.

Also in the attic is a double fronted bookcase containing many many volumes of Kipling biography and criticism. It’s a separate collection of British, US and some French books donated to Naulakha. Most of the information that I absorbed about the author and his New England home came from the box file of notes which contained the House Tour, the very detailed notes of submission for the house to be included on the [US] National Register of Historic Places and magazine and newspaper articles; from the museum information boards and from the 96 page The Hated Wife ; Carrie Kipling, 1862-1939 by Adam Nicolson and published in the short lives series by Short Books in 2001. Lent to me by a friend (and reader here) it sums up the Kipling life stories but left me still sympathetic to Caroline and, of course, their tragic lives which included the early deaths of two of their three children.

Rudyard Kipling never built any other homes for himself and eventually settled in a 17th century house in the Sussex Weald.  He lived there for 32 years from 1902 to 1936. Since 1940 it has been in the ownership of The National Trust. How I long to visit Bateman’s.

Josephine Kipling died of influenza in New York in 1899 as the family were on their way to visit Caroline’s mother in New England. Kipling was very ill at the same time  and after his recovery they returned to the UK. They were never to revisit New England and their beloved Naulakha was sold.

“Oh, dear, what comfort can I find?”
None this tide,
Nor any tide,
Except he did not shame his kind—
Not even with that wind blowing, and that tide.

Then hold your head up all the more,
This tide,
And every tide;
Because he was the son you bore,
And gave to that wind blowing and that tide.

So you see how Bliss turned to Tragedy for Rudyard and Carrie Kipling.