For a long time I’ve been intrigued to visit Highgate Cemetery and my chance arose last Thursday. There are two cemeteries on opposite sides of the road – Swain’s Lane – in Highgate. The East Cemetery which is home to the more famous graves and still in use today (at a high price!) can be visited by anyone during opening hours for a charge of £4. The West Cemetery you have to book in advance during the week and join an organised tour. There are some more recent burials here (the so-called Russian dissident Alexander Litvinenko for one, and the author Beryl Bainbridge for another) but mostly it is full to bursting with Victorian funerary art and symbolism. The cost of the West tour also covers the entrance fee to the East Cemetery. 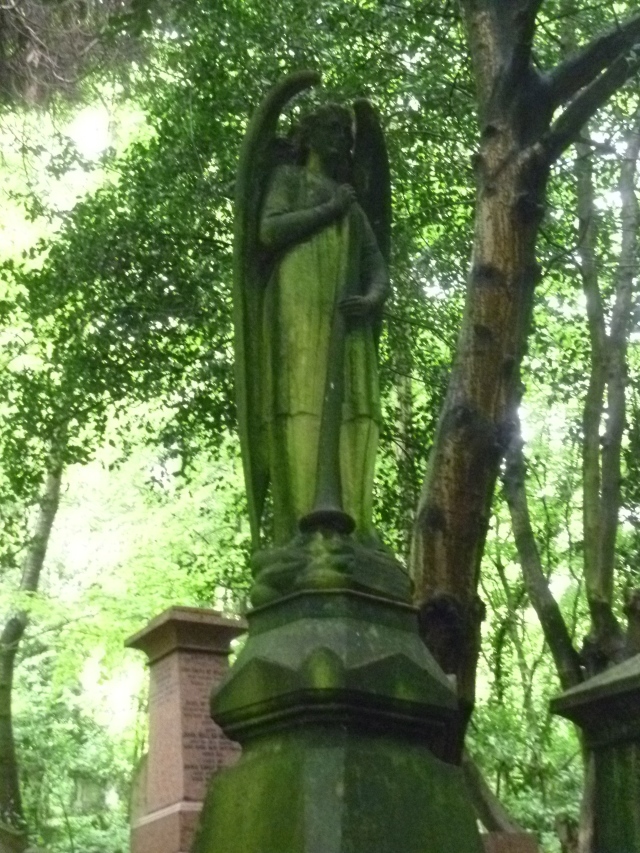 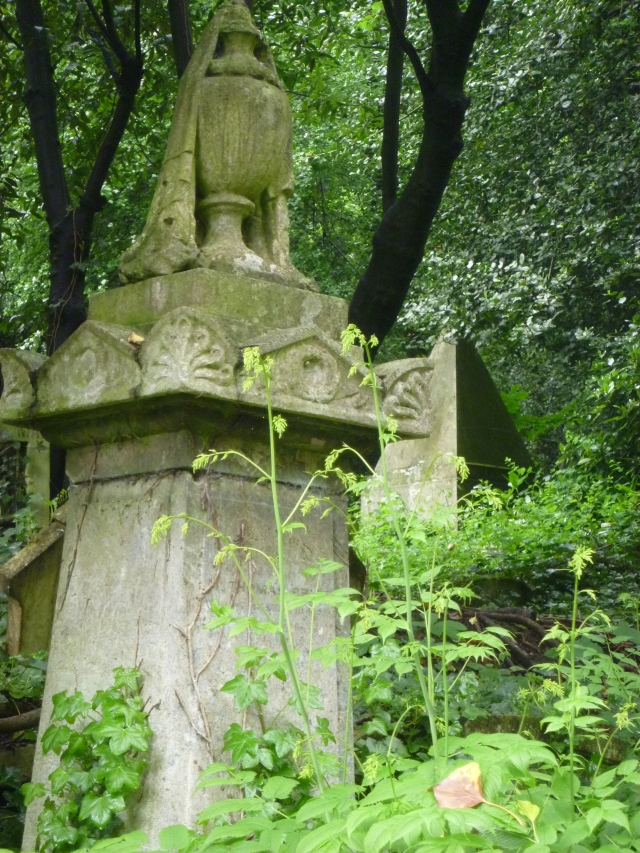 Highgate Cemetery was one of London’s ‘Magnificent Seven‘ cemeteries established during the early 19th century in order to alleviate overcrowding in the city’s churchyards : 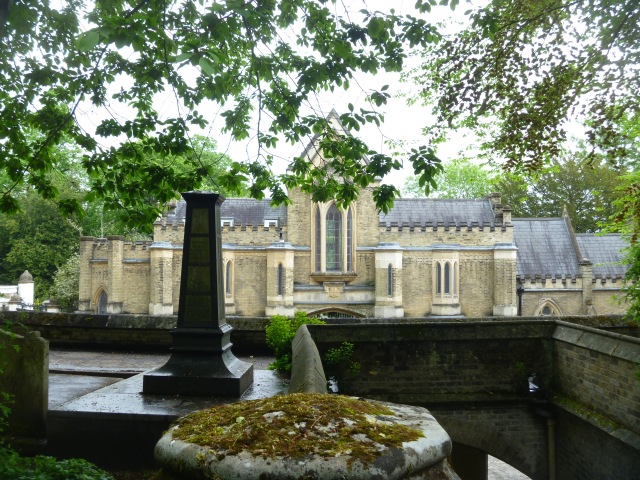 Here is the description on the opening page of the cemetery website :

“One of London’s greatest treasures
Highgate Cemetery is a haven of beauty and tranquility, a place of peace and contemplation where a romantic profusion of trees, memorials and wildlife flourish in the heart of London” 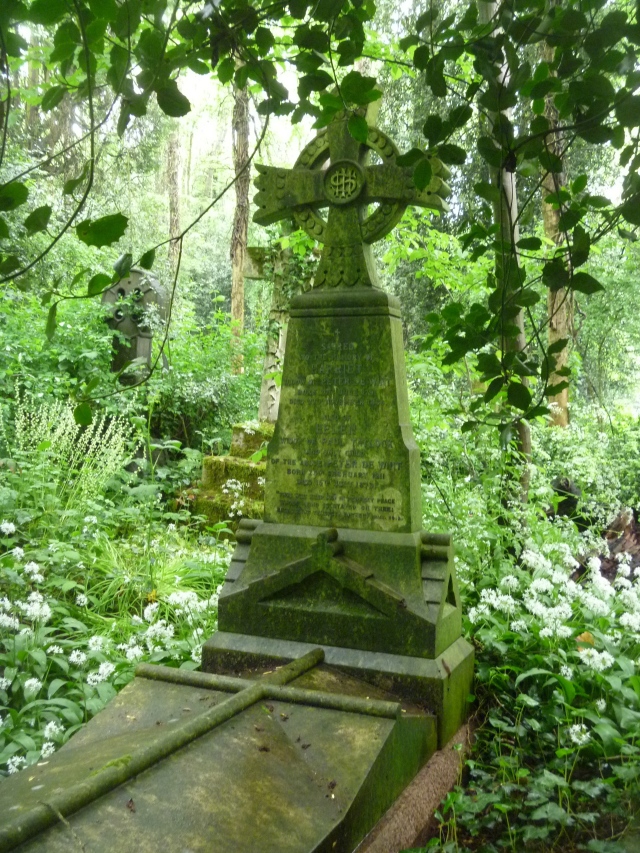 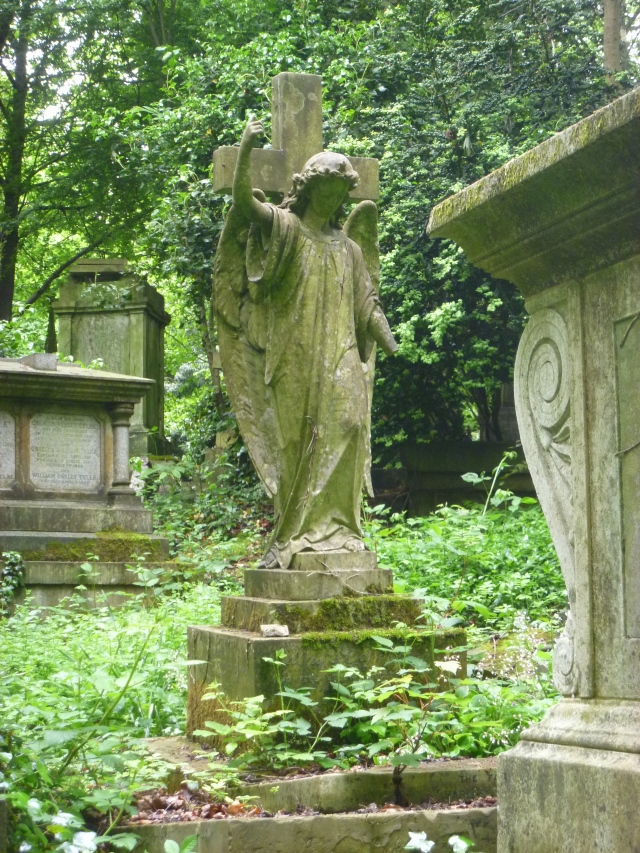 That description proved oh so true on my visit last Thursday. It is a wonderfully atmospheric place. During the introduction to the tour Gordon, our leader, explained the current policy of ‘managed neglect’. During the 1970s it was no longer profitable to run the cemetery commercially and it was left to go to rack and ruin and vandals and thieves. In 1975 a band of locally interested parties got together to rescue the cemetery and establish The Friends of Highgate Cemetery Trust which now runs the place, organising the paid staff as well as the countless volunteers, who help to guide tour groups and maintain this special landscape. 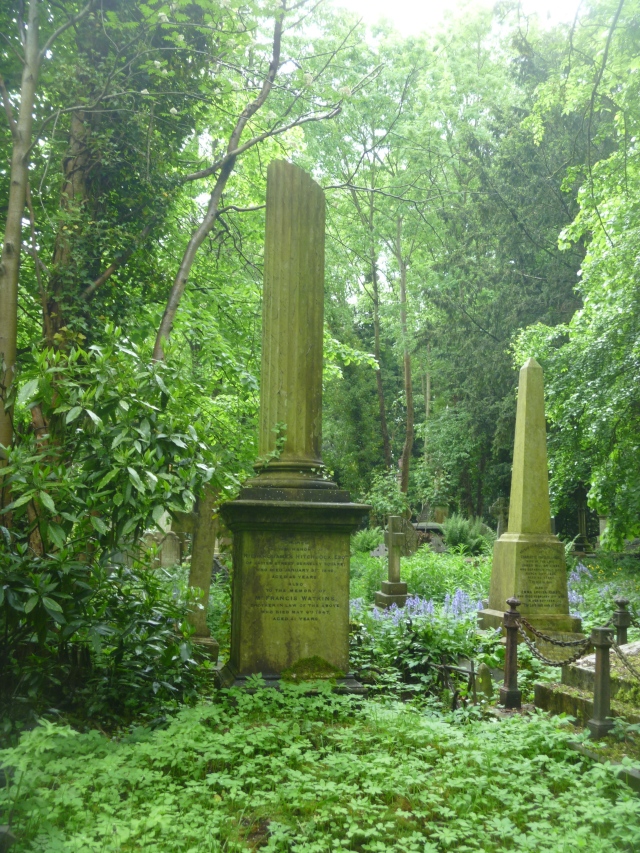 We visited a number of graves of significant people of the 19th and 20th centuries and the symbolism of many of the features was also explained to us. Three tier plinths represent faith, hope and charity; a trumpet means The Judgement Day; a broken column a life cut short. We heard stories connected with some of those buried here, were able to go into the Terrace Catacombs and the Julius Beer Mausoleum and visited the Egyptian Avenue, the Circle of Lebanon and the funerary chapel. 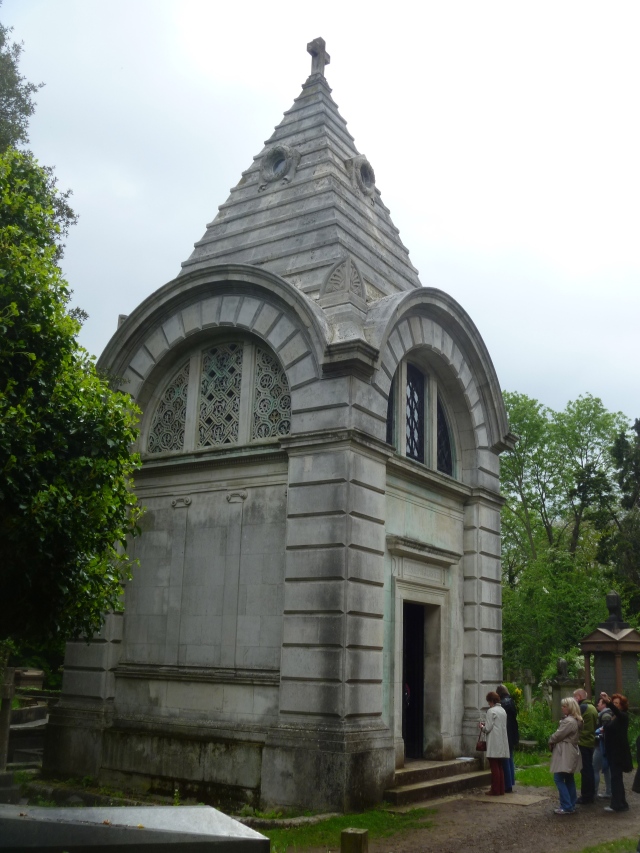 The Mausoleum of Julius Beer (no photography allowed inside) 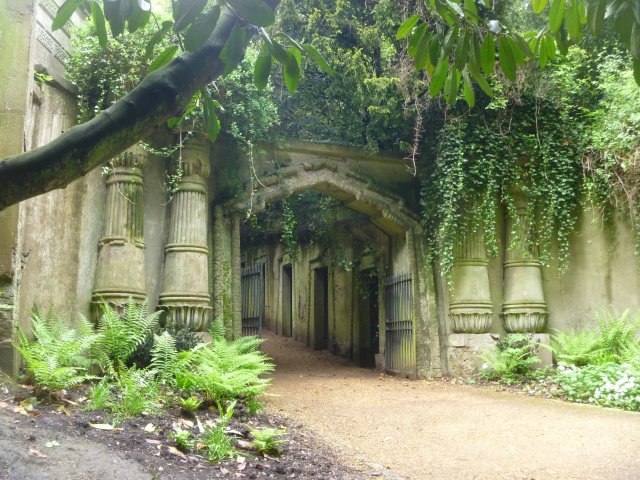 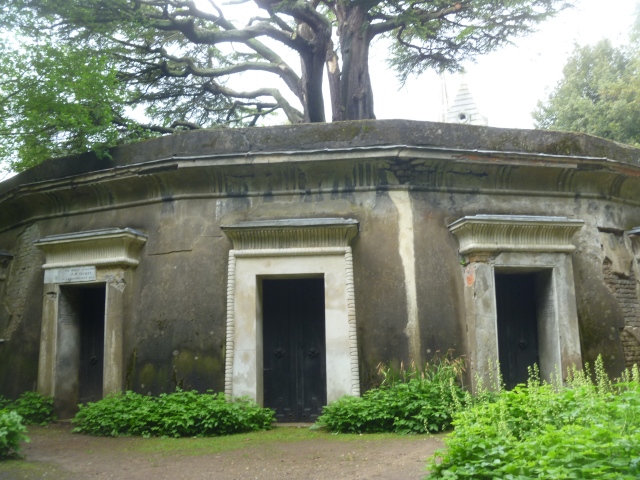 The Cedar of Lebanon Circle 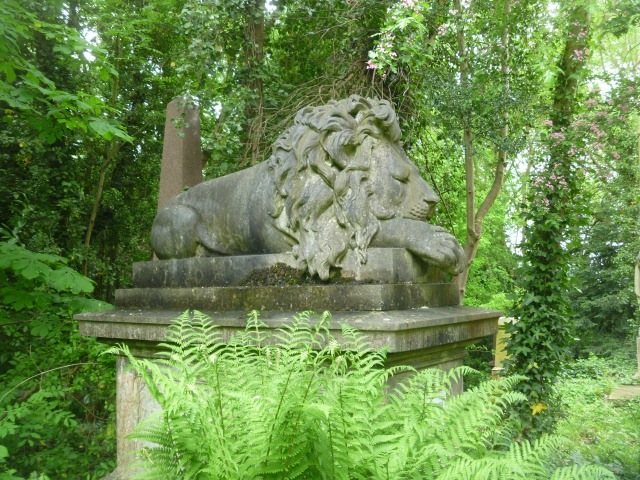 And Thomas Sayers’ bull mastiff, below 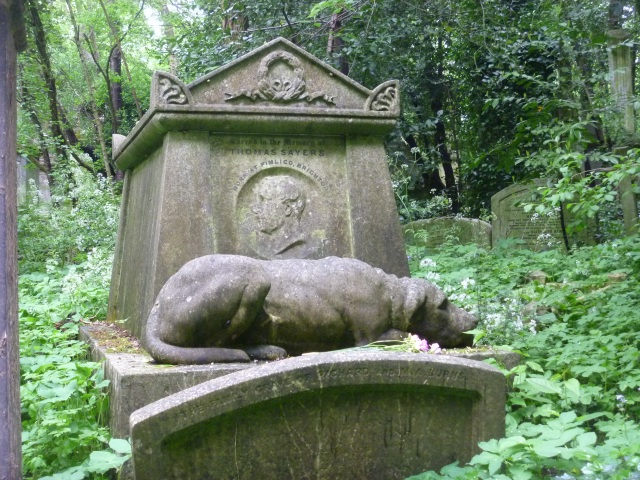 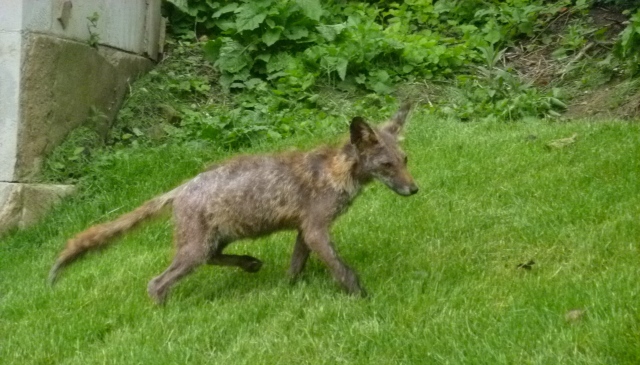 We even saw a live inhabitant!

The East Cemetery has its own atmosphere and clearer to follow paths with less undegrowth and many more recent and famous graves and memorials – the most famous probably being that of Karl Marx erected and paid for by the British Communist Party in 1955. It is truly larger than life. 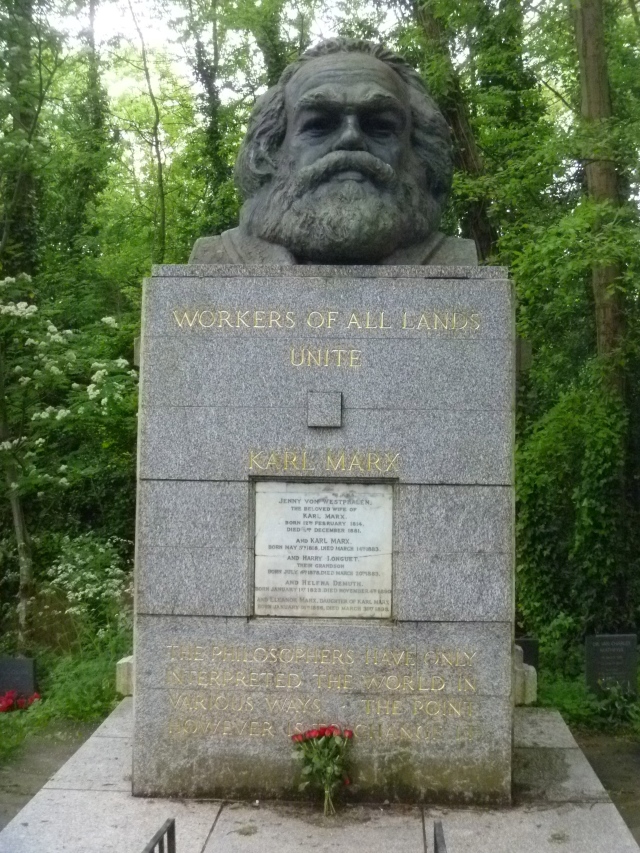