It’s probably a few years since I was last up in Malhamdale so yesterday I was happy to join another Dalesbus Ramblers ramble there. The forecast was for showers but luckily not a drop fell.

I joined the 875 bus at Harrogate Bus Station at 9.55 with my Metro Bus Pass and enjoyed the journey to Kirkby Malham thankful that I was not driving along the narrow twisting lane between Gargrave and Kirkby Malham myself.

Six of us set off from Kirkby Malham up, up, up through the hamlet of Hanlith joining the Pennine Way from where we gained wonderful views back to Kirkby Malham and ahead to Malham Cove.

Looking back to Kirkby Malham

Malham Cove and River Aire from the Pennine Way

We left The Pennine Way as it headed directly to the village of Malham and joined a popular footpath to Janet’s Foss. On entering the National Trust woodland area within which is the waterfall I noticed a sign telling about the Bee Library. I have seen one of these before at The Yorkshire Sculpture Park so knew what to look out for in the trees. 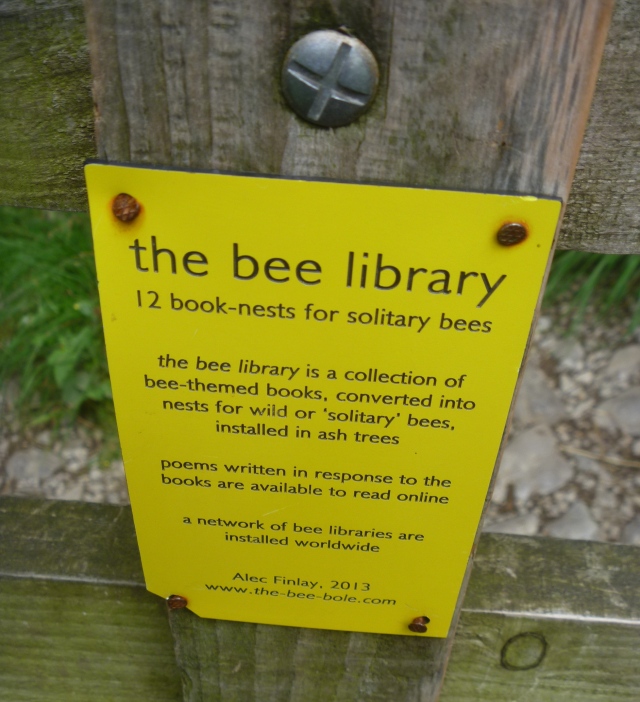 We also saw the Coin Tree. 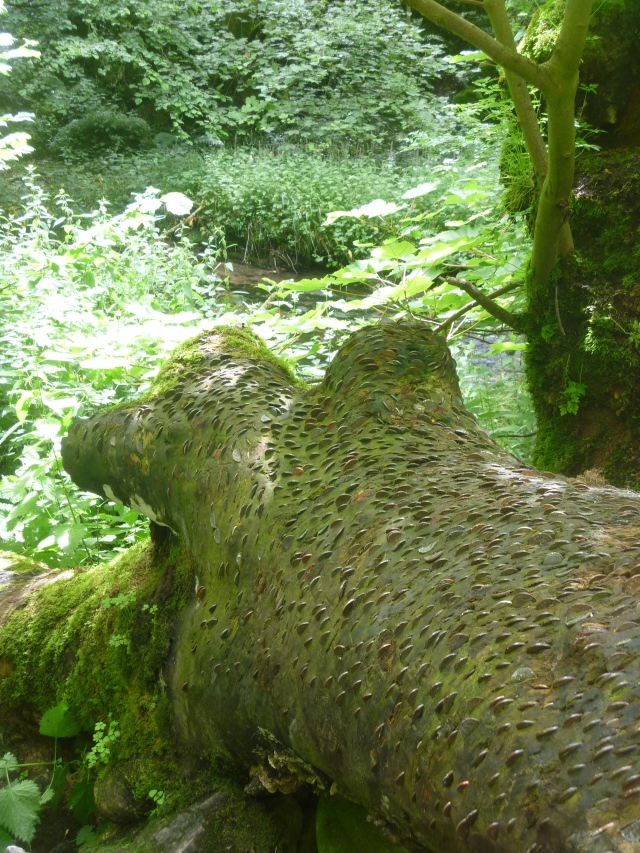 “People have hammered copper coins into this dead tree trunk near Janet’s Foss waterfall for good luck for many years, and if you look closely you may find some very old pennies. This should never be done on a living tree as the coins will poison it. In Yorkshire we look after our pennies (because ‘the pounds then look after themselves’) so perhaps there is something to this tale! ”

The Foss was crowded with visitors and there were even some brave (or foolish?) swimmers in the pool under the waterfall. Nevertheless we ate our lunch watching the world go by and then crossed the nearby lane and headed for Gordale Scar.

Climbers were out on the rocks and on the cliff face and the bird spotters amongst us pointed out just one Peregrine Falcon circling in the sky above the Scar. 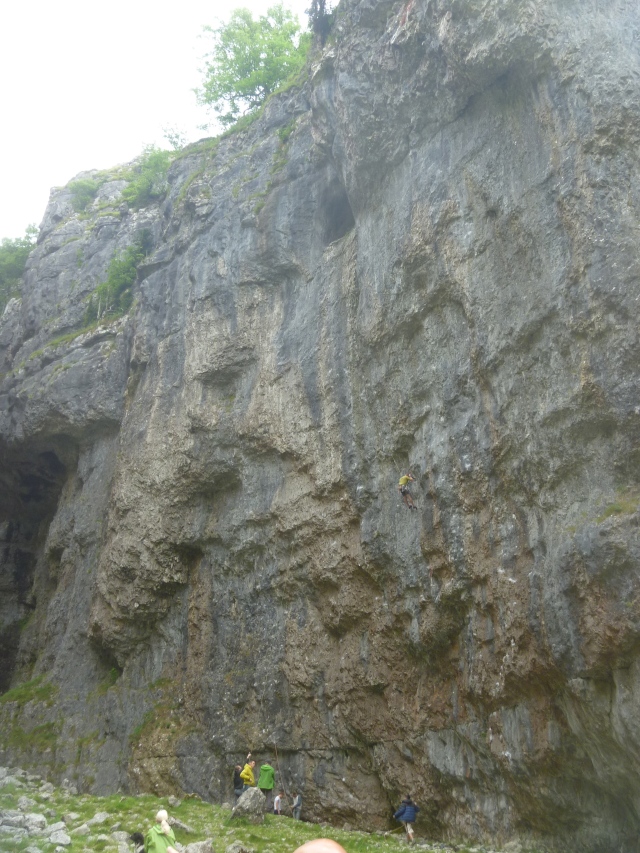 Retracing our steps to the lane we then climbed up to the plateau above Malham Cove where we crossed the clints and grykes of the Limestone Pavement. The clints are the blocks of limestone and the grykes are the gaps in between.

There are nearly 400 steps to tackle to get down to the bottom of the Cove and the steps were busy with folk going up and down. Apparently Malham Cove features in the film Harry Potter and the Deathly Hallows. Potter is seen camping at Malham Cove and scenes were filmed all around Malham including the Cove, the limestone pavement, Malham Tarn and Gordale Scar. Hence the large numbers of visitors.

When you get to the valley bottom the RSPB have set up their Malham Peregrine Watch complete with information table, binoculars on tripods and staff and volunteers ready to answer questions and tell about the project. We spent about twenty minutes looking and listening but no peregrines were prepared to perform for us at the Cove that afternoon. 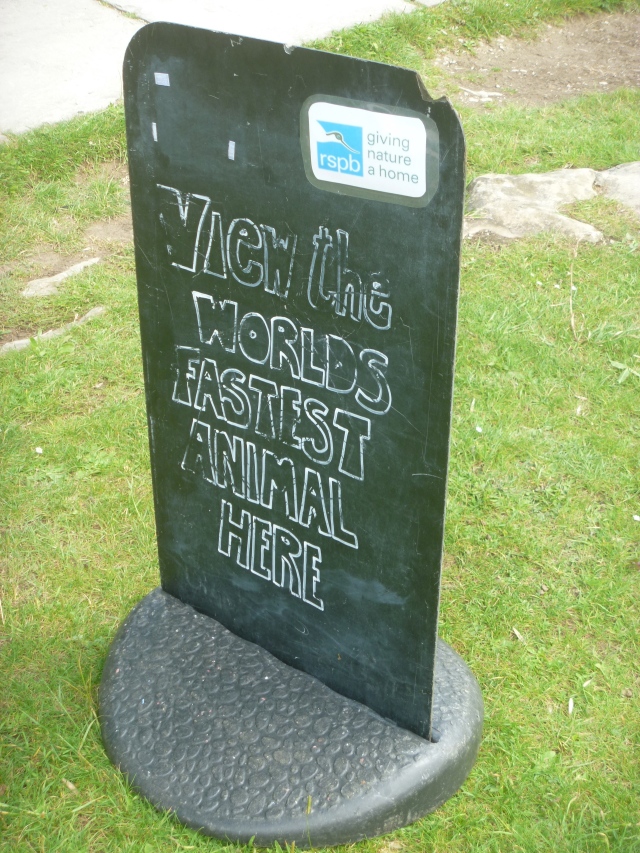 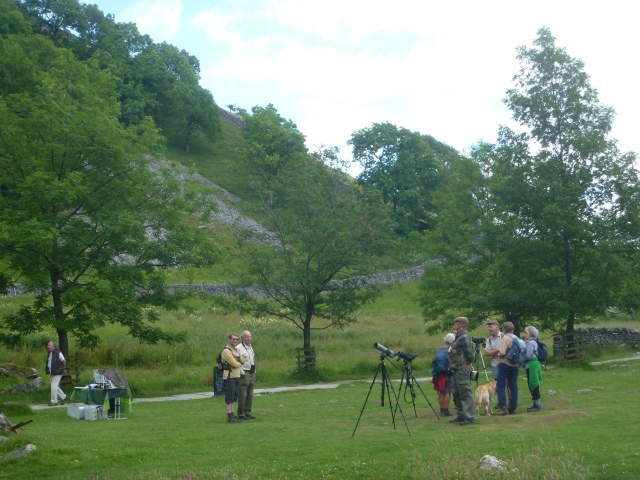 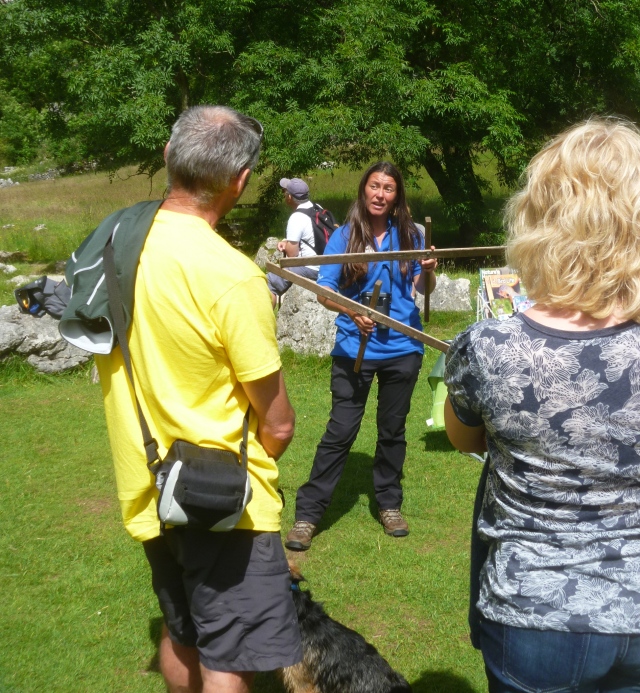 Sue, the RSPB officer, shows us the approximate sizes of male and female peregrines (male is smaller)

Finally we rejoined the Pennine Way, this time heading south, into the village of Malham where I enjoyed a welcome pot of tea and slice of Yorkshire curd tart before joining the bus back to Harrogate and thence home.

Leaving Malham Cove with the Crowds

3 comments on “Malhamdale Hills and Hawks”

Leave a Reply to Our Town : From Peterborough, New Hampshire to London, England « miladysboudoir Cancel reply