It’s nearly 40 miles to Jervaulx Abbey near Middleham, North Yorkshire and Thursday morning dawned rather grimly with rain and dark clouds. It seemed a long way to drive in order to get soaking wet all day.

But the Weekday Wanderers were not deterred and we met as usual at 9am at The Grove Church Car Park and two cars – eight of us in all – set off northwards. The rain had stopped and I lead a very successful ramble:

“Easy walking  – no hills. Field and riverside paths plus a pleasant walk through parkland at Jervaulx. Distance – 7.5 miles. Car parking at Jervaulx (£1 in honesty box)” 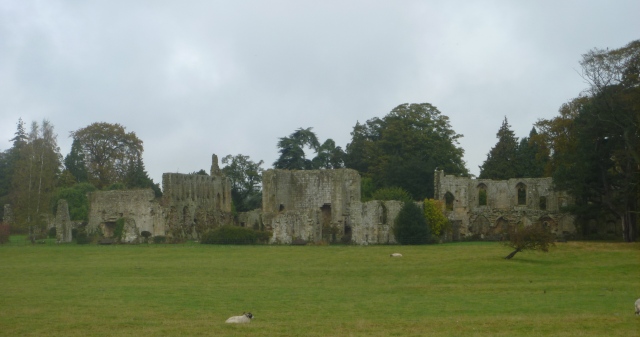 I had for a long time I had wanted to do this walk – always attracted by abbey ruins and other features of the landscape. I copied the walk from a book of walks from the library over a decade ago and unfortunately did not make a note of the title and author. Some of the features had changed slightly – a hedge was now a fence and a stile now a gate – but the bulk remains the same and the route was easy to find.

A Glimpse of Blue Sky

We always take it upon ourselves to do a “recce’ or “walk out” in advance of leading and I was only able to do this with a friend in August. Believe me the weather on Thursday was a huge improvement on The Saturday in August when we got soaked to the skin.

At Jervaulx we took the public footpath signposted To the Abbey but kept straight on through the park and fields of sheep to the lodge and gates at the far end. There we joined a small, quiet lane that crosses the River Ure (the river of Wensleydale) at Kilgram Bridge just after which we diverted from the lane to cross fields to arrive at Thornton Steward.

What a lovely and kind village Thornton Steward is! In August as we lunched on the village green the heavens opened and we rushed to the nearby bus shelter. There we found a bag of fresh damsons with the message – Please take these – free to good cooks – or words to that effect. We took them, shared them and left a message of thanks in the village noticeboard. There we read :

So we noted the Institute and the benches outside and decided that this was the perfect picnic place for the October walk. 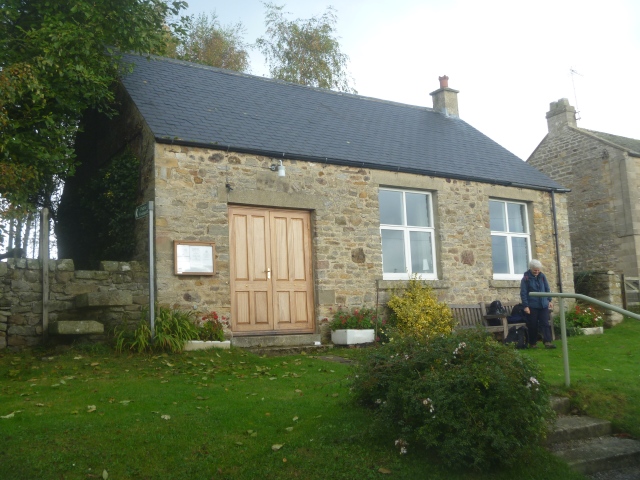 Please make your own teas

“Sited around a small village green, the village enjoys a wonderful southerly aspect with views across the broad valley to Jervaulx Abbey, Ellingstring and Witton Fell. Sheltered from the north by the higher land towards Finghall, it is surrounded by fertile farmland including the interesting Manor Farm and Danby Hall.

The small ancient church is situated on lower land a quarter of a mile away, and centuries ago may have been in the centre of the original settlement. The recently discovered thirteen hundred year old graves to the west of the present church suggest ancient settlement in the area.

The “neat, Gothic structure” dedicated to St. Oswald was part of the [Ripon] Diocese and in the patronage of the Bishop of Chester in 1823. The Reverend John Ewbank lived in the fine vicarage in the village, and between 1917 and 1953 the ministry of the blind Reverend Swayne was well known throughout the Ripon Diocese. This church is one of the oldest and most attractive in the country, abounding in history and interesting architecture. The surrounding area is preserved for wild plant and animal life and is a haven of peace and solitude. 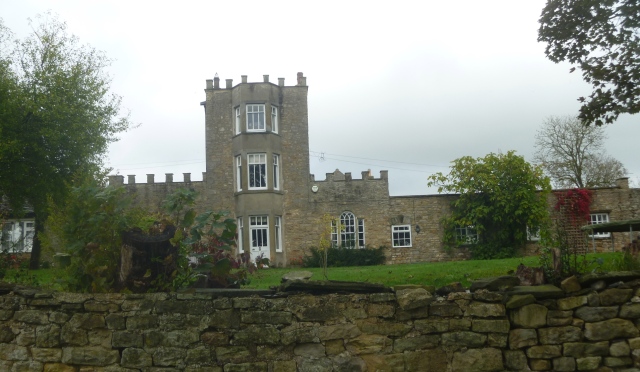 In 1815 the school was erected by Captain George Horn, Esquire, [builder of the folly, now a private dwelling, Fort Horn] when the population of the parish was two hundred and sixty five. He was the wealthy “gentleman” of the village and provided a neat School House for John Story the schoolmaster, and an endowment of ten shillings per annum for the education of the poor children of the parish.” [source]

After make use of facilities and leaving our donations we headed west out of the village down the private track that leads to the ancient church and thence across the parkland of Danby Hall and out onto quiet lanes which eventually cross the River Ure again and soon after the River Cover (hence, the Cover Bridge). Bothe rivers join to become the Ure and we followed its banks for the final stretch back to Jervaulx Car Park.

River Ure at The Cover Bridge 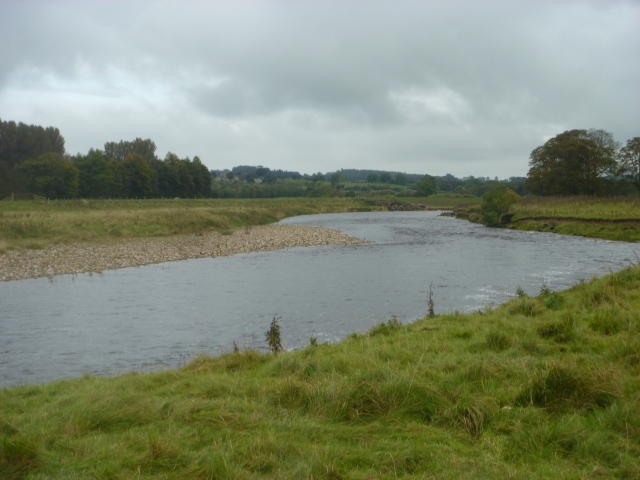 River Ure near the end of our walk

On our walk out we had ice creams at the nearby Brymor Dairy but the majority vote was to head to Masham and the Theakston’s Brewery Visitor Centre where we actually sat outside in the warm sunshine at the end of a most enjoyable and varied walk.