Perhaps the most famous location in the town of Tivoli itself is the Garden of the Villa D’Este. The sun was shining on my last day at Sant’ Antonio and I decided that I would visit the garden and that of the nearby Villa Gregoriana. 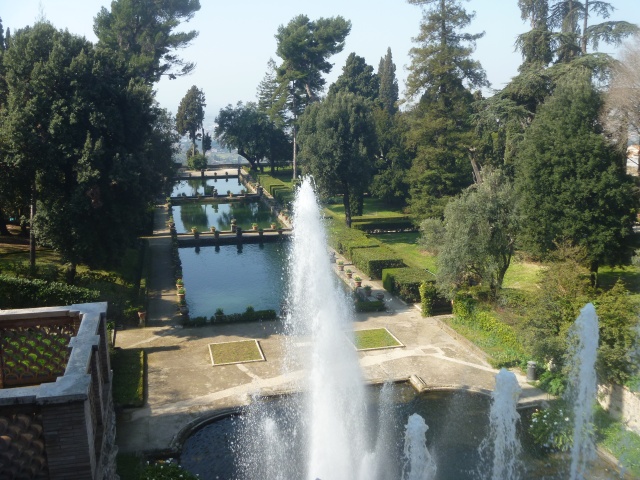 Thursday 19 March just happened to be St Joseph’s Day (Father’s Day) and a big celebration filled the town centre of Tivoli. Was this the reason why the Gardens of the Villas D’Este and Gregoriana were practically deserted that morning? Anyway, it was very pleasant to have the gardens virtually to myself.

Cardinal Hippolyte D’Este (1509-1572) became governor of Tivoli and set about establishing a garden. Today it’s approached from the house but originally the entrance was at the bottom of the garden and visitors slowly climbed the hill to take in the wonders of the garden. Upon reaching the top, where the Cardinal would be waiting, you’d be in a ‘sense of breathless awe’. (According to Monty Don in the 2011 series of BBC programmes visiting Italian Gardens).

The View from the Villa

D’Este had great wealth but the one thing he wanted above all was to be Pope. He failed in 1549. So he demolished streets and had water brought to the site by a sophisticated method from a nearby aqueduct. All the water still comes from this same source and using the same methods. No pumps are used and the whole is still powered by pressure. The speed and movement of the water are still controlled by different sized pipes and spouts.

The whole estate took 20 years to construct during which time the Cardinal made 5 attempts to become Pope. Here “Rometta” is his model of Rome – he never did achieve his goal. Here is an expression of power built to impress. But he ran up huge debts: the whole project is said to have cost the equivalent of £100 million in today’s money. 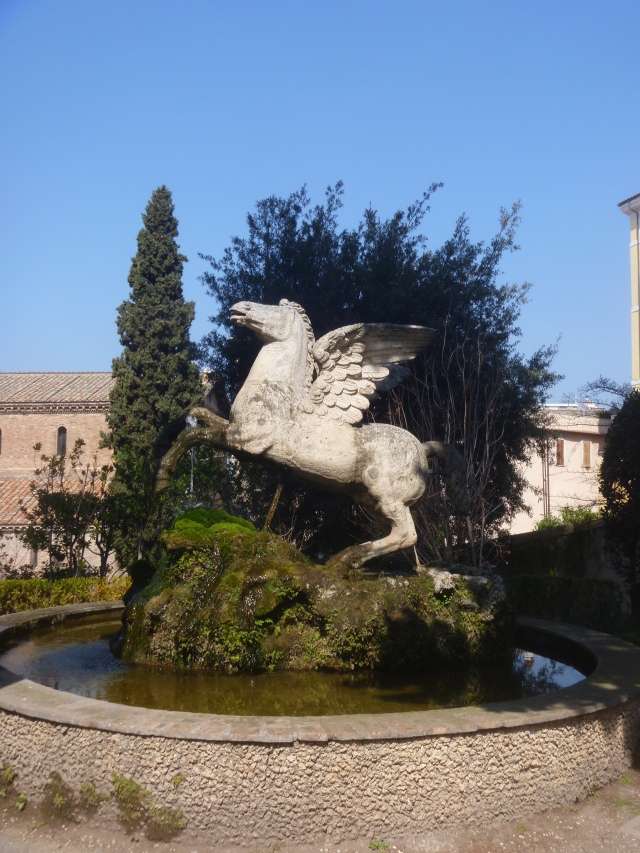 The Organ Fountain Plays Every Two Hours on the Half Hour

It’s a wonderful theatrical performance full of drama and excitement; entertainment and playfulness with surprises and jokes. In addition to the gardens you can visit the mansion atop the hill the mansion is open too – room after room of breath-taking painted ceilings but little else. Like Hadrian’s Villa the Villa D’Este is a UNESCO World Heritage Site.

I spent over two hours wandering around the gardens and house but felt the call of the Villa Greogoriana and, ultimately, Sant’ Antonio. 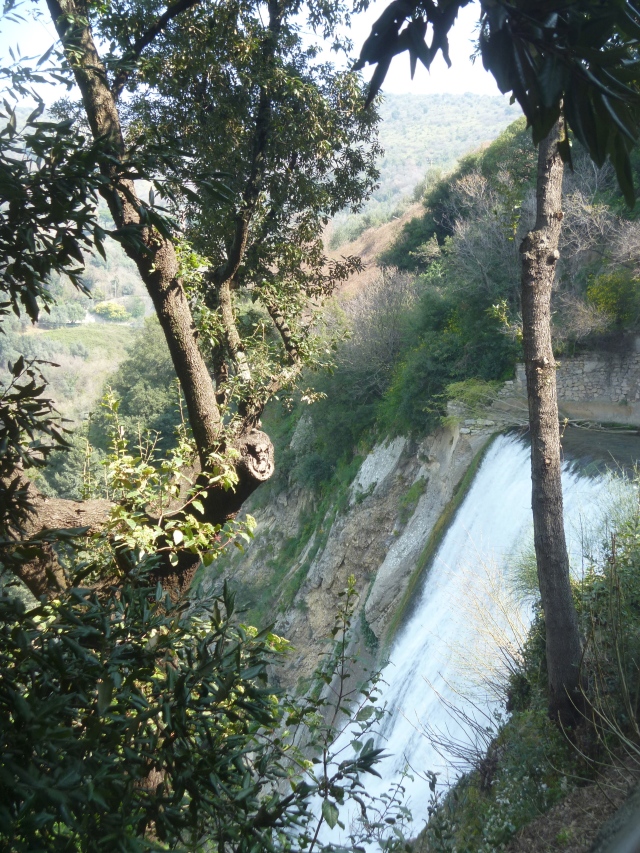 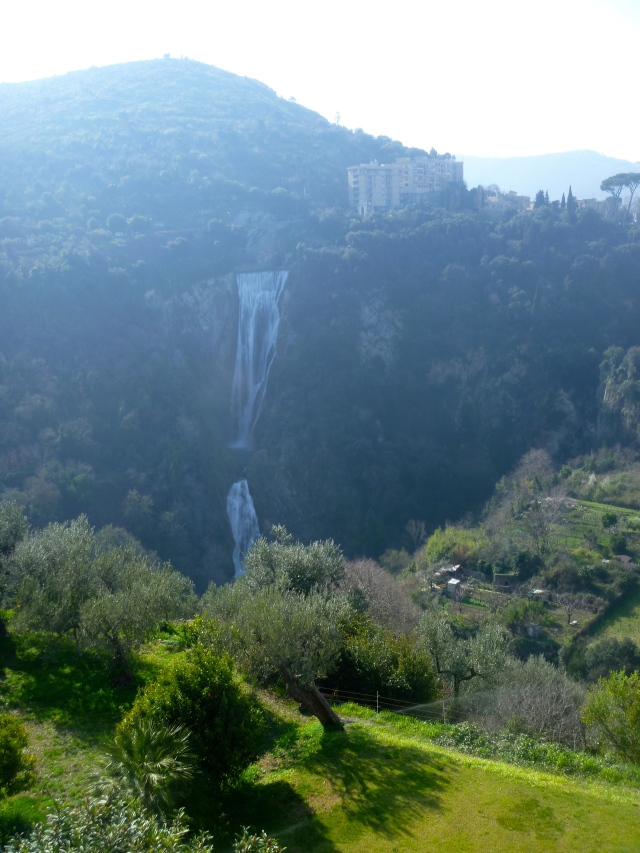 The Grand Cascade from my window at Sant’ Antonio

The Park of the Villa Gregoriana, for the Villa itself is no more, fills both sides of a wooded gorge where the waters of the River Aniene spill over precipices and lie still in pools in the valley bottom, is perhaps my favourite of the three gardens of Tivoli. Much of it, including the huge waterfall, can be seen from Sant’ Antonio and it appears more natural and less planned than the other two. Sant’ Antonio can be seen from the park. 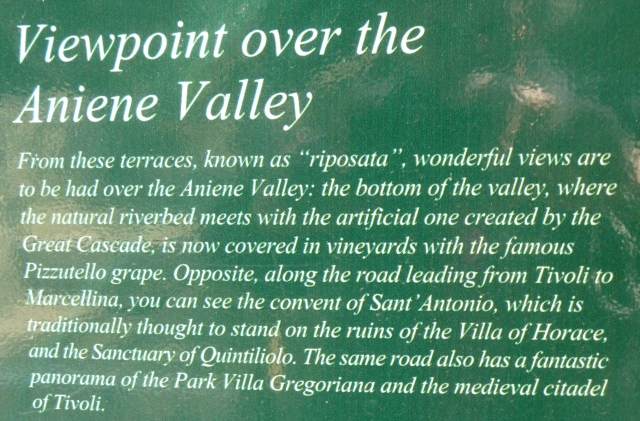 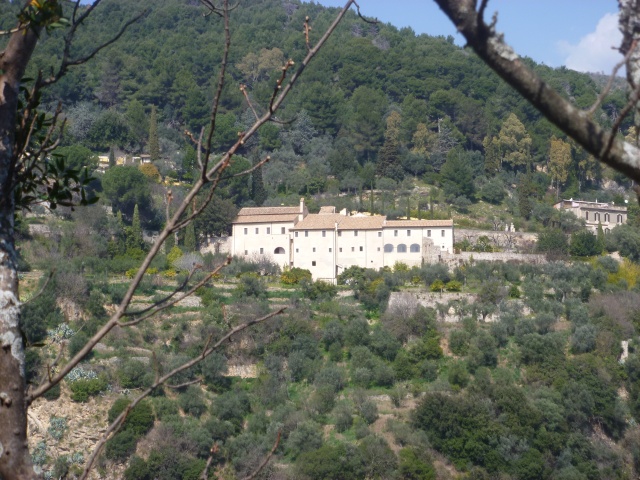 Sant’ Antonio from the Villa Gregoriana

If you ever plan to visit be sure to wear strong, rubber-soled walking shoes as the paths and steps are uneven and slippery when wet and take your National Trust card with you, if you’re a member. Entry is free to NT members. The FAI in Italy aims to preserve Italy’s art, nature and landscape and has reciprocal arrangements with our National Trust.

Remains of the Villa of Manlius Vopiscus 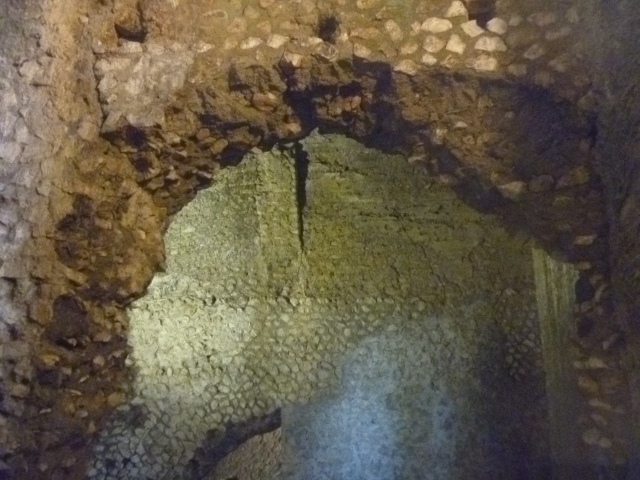 Roman Wall inside the Villa remains

“The park was commissioned by Pope Gregory XVI to rebuild the bed of the Aniene River, which had been damaged by the terrible flood of 1826. It had fallen into rack and ruin by the end of the 20th century, but has been reopened to the public in 2005 thanks to a major landscape recovery project orchestrated by FAI, the Italian National Trust.

It was in 1835, after the Aniene River had burst its banks yet again, that Pope Gregory XVI decided to transform this enchanting but extremely dangerous location into a model of integration between art and nature. The project saw a tunnel being dug through Mount Catillo in order to deviate the river and thus preserve the town of Tivoli. This was then followed by the construction of an extraordinary natural garden dominated by the acropolis with Vesta and Tiburno’s Temples.

As you walk through the thick woodland of Parco Villa Gregoriana you will discover the delightful combination of the majestic landscape and the tranquillity of the paths that meander through it. En route, you will get to the caves of Neptune and of the Sirens, which form part of an incredible series of gorges and cascades, and to the Great Waterfall, with its whirling mass of water that seems to fall directly onto those who stand and gaze at it.”

The Cave of the Sirens 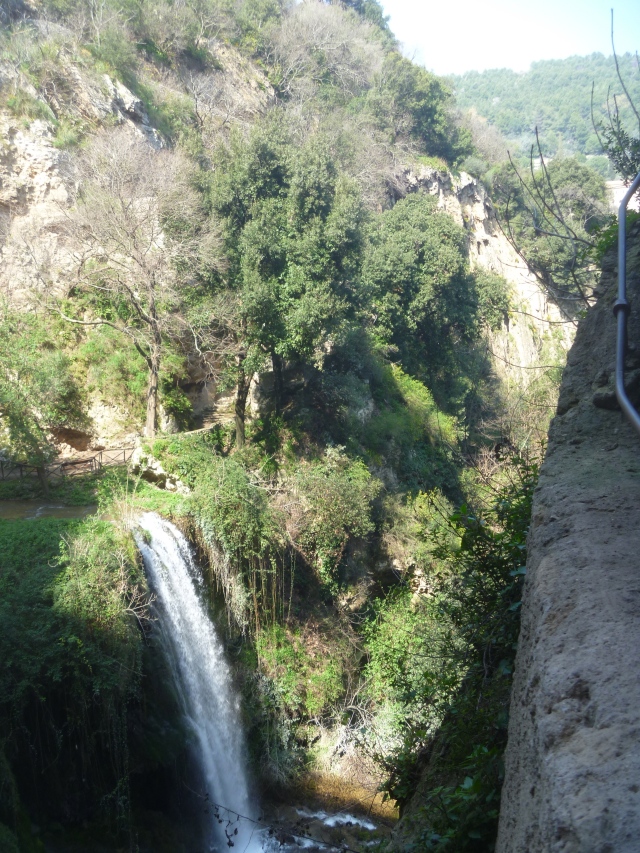 Views of the Valley of Hell from Upper Viewpoints

According to the leaflet/map guide to the gardens “Goethe was among those who were amazed by the area. ‘I was recently in Tivoli, where I admired a breathtaking natural spectacle. The sight of the waterfall there, along with the ruins and the whole landscape, greatly enriches the soul’. Goethe visited during the heyday of the Grand Tour, when Italy was the destination of choice for upper-class travellers from all across Europe, affording them and unrivalled classical education.” And this was long before Pope Gregory XVI’s re-creation of the original garden.

6 comments on “More Watery Landscapes in Tivoli : The Villa D’Este and The Villa Gregoriana”