What a difference a day made! On Saturday morning 25 April (ANZAC Day) it was pouring with rain as we made our way to Whitehall where we were attending The National Commemoration of the Centenary of the Gallipoli Campaign and ANZAC Day. 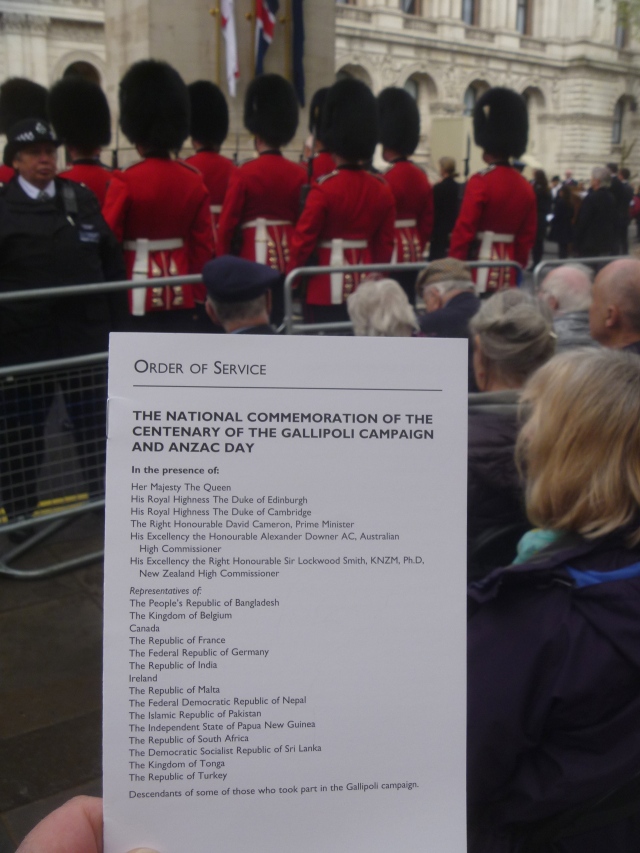 There we are at the bottom of the page!

You may remember that I did some research to find out more about the life and death of my great uncle, Marshall Howman, who was killed at Gallipoli on 21st August 2015. The Gallipoli Association very kindly supplied me with relevant information and I decided to sign up and support them. Through the Association we received an invitation to join the proceedings, in a specially reserved area for Gallipoli Descendants.

We arrived early and  after passing through tight security secured for ourselves (me, my sister and our Australian friend, Ann) a pretty good position within the Descendants Viewing Area. We stood immediately behind the limited seating and right by the Cenotaph itself with a view of the Foreign and Commonwealth Office door and red carpet and had a diagonal view of the Royals. That was about 9am. Gradually the rain stopped altogether and we managed to dry out.

There was plenty going on and it was interesting to see one of these events from behind the scenes. Eventually Guards with busbies stood in front of us; but I could still just about see most of what was going on.

Not a Bad View 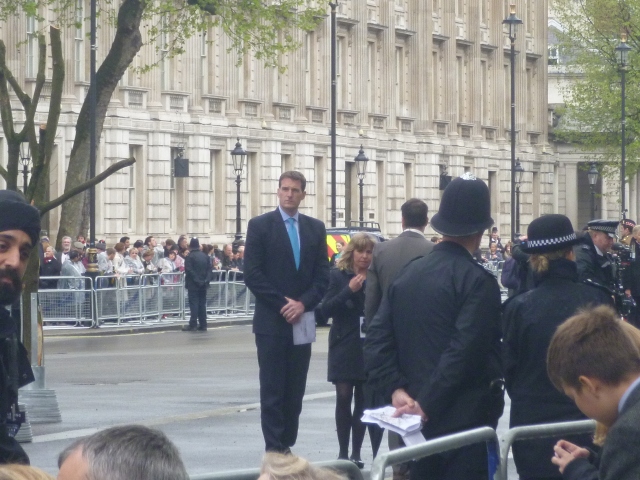 If you look closely in the middle of the photo you can see the tree sculpture Gallipoli 1915 by Nadir Imamoglu. It’s a small-scale reproduction of one which forms part of the ‘Gallipoli 1915’ memorial at the National Arboretum in Staffordshire. The leafless branches symbolise the hands of soldiers on the beaches of the Gallipoli Peninsula, raised to distinguish them from their dead comrades. [From the Souvenir Brochure]

Just before 11 the Queen, the Duke of Edinburgh, Prince William and other VIPs – British, Australian, New Zealand, Turkish and representatives of many other other nations involved in the Gallipoli Campaign (and the sun!) came out. As Big Ben struck the hour we began a Two Minute Silence. This was followed by The Last Post, A Reading : For The Fallen by Lawrence Binyon :

They shall grow not old, as we that are left grow old:
Age shall not weary them, nor the years condemn.
At the going down of the sun and in the morning,
We will remember them. 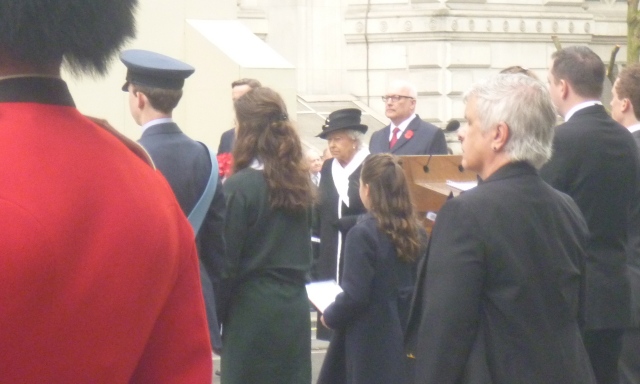 And the Laying of Wreaths. A short service of readings, a hymn and national anthems then followed. 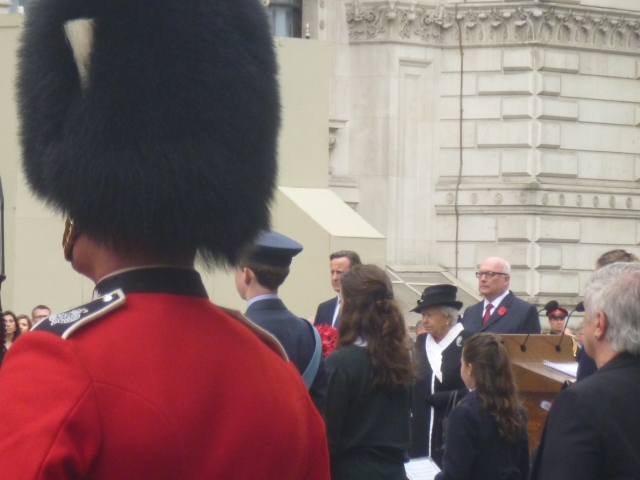 After the Service there was a march past made up of representatives of UK and foreign forces and various associations including, of course, our own Gallipoli Association. When, as descendants, we were invited to join the Commemoration we were given the option to either attend the service or join the march past. 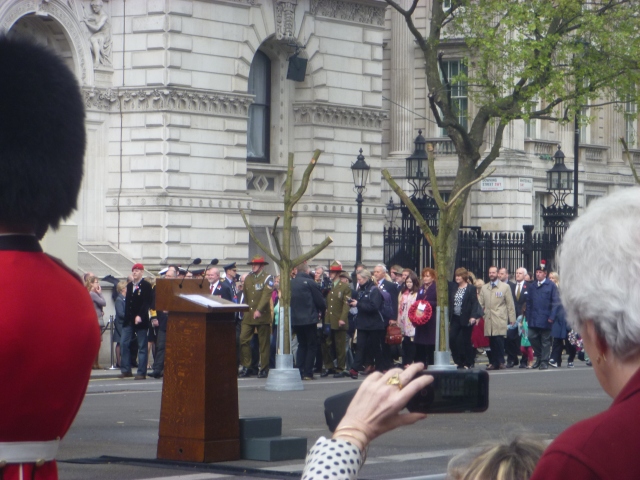 Everyone Applauded the Chelsea Pensioners

At home I recorded the BBC coverage of the morning and on Monday enjoyed watching in comfort the very moving and memorable event that I had witnessed at first hand on the Saturday. 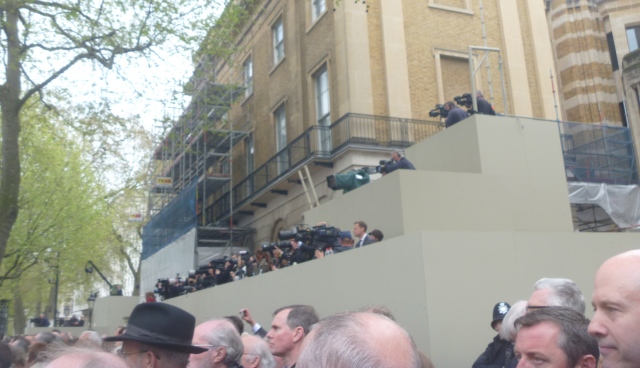 Cameras at the ready! 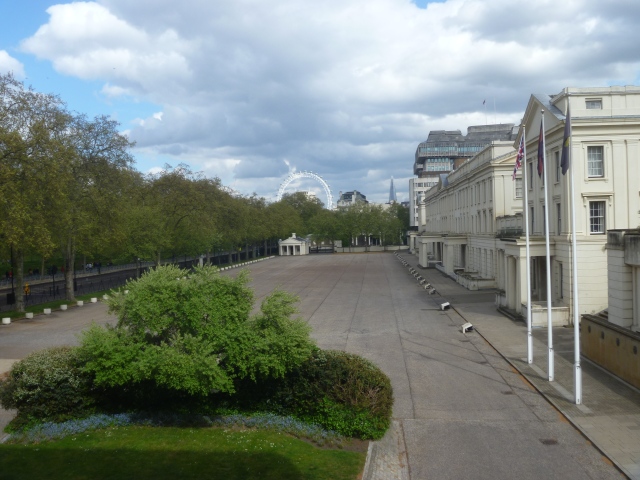 At The Wellington Barracks, Birdcage Walk

After the Cenotaph Service members of the Gallipoli Association were invited to a Buffet Lunch at the Wellington Barracks. I was happy to meet other members and officers of the Association.

“We will remember them”