Last year during my tour of Longfellow’s House in Portland, Maine, our guide happened to mention that The Portland Observatory was well worth a visit. I read more about it in my guide book but there wasn’t time to get there in 2014. This year it was at the top of my list so after a delicious lunch at Central Provisions I headed for Congress Street, one of the ‘main drags’ of Portland. It’s an uphill pull to reach the Observatory but that would be necessary as an observatory, of course, needs to be on the highest ground. I had expected something like the Hampstead Observatory where you can view the night sky but the Portland version is a very different.

On arrival I joined 3 other visitors on a volunteer guided tour to climb the 103 steps through seven stories to the viewing platform with a good dose of history thrown in.

On March 21, 1807, Lemuel Moody bought a one-half acre plot on the crest of Munjoy Hill, Portland. He planned to build a “marine lookout” to identify ships entering Portland Harbor and to provide useful information to ship owners and merchants. Such maritime signal towers already existed in Maryland, Massachusetts, New York and England. In order to raise capital, he founded the Portland Monument Ground Association and sold shares to investors. [Adapted from Observatory information boards] 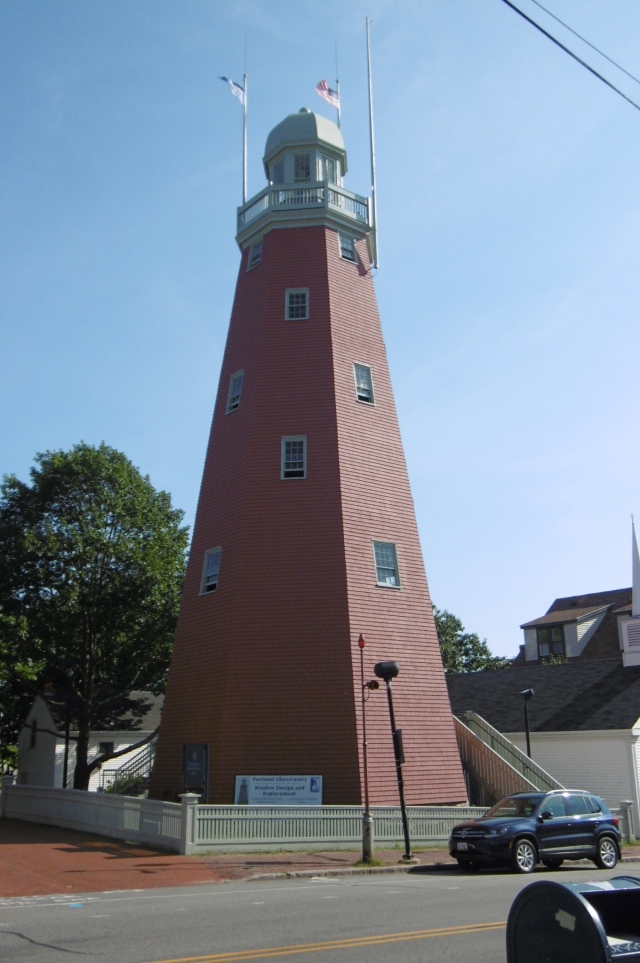 The tall octagonal building was not well received at first due to its being built of wood and not brick. It was dubbed “the brown tower” but today it is celebrated as a National Historic Landmark.

The idea was that two flags were made for each vessel. One was to be flown by the ship as it approached the harbour and the other kept at the Observatory and flown when the observer spotted the ship’s flag. The merchant, or his representative, could then get straight to the port and greet the ship as it arrived and unload its cargo.

Carnival Splendour and Celebrity Cruise ships in the Portland Harbour

The flags have all gone now and so has the original telescope as the building was left to go to wrack and ruin during the mid twentieth century when technological advances improved ship to shore communication. It is amazing that the wooden structure has survived all this time. In 1866 Portland was virtually gutted by fire which reached as far as the nearby streets and destroyed a huge percentage of buildings in the city. 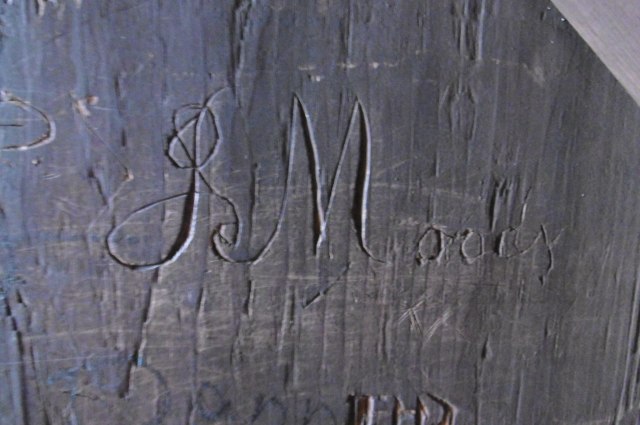 The initials of some of those involved in building the tower were carved into the wood are still visible including Lemuel Moody’s [above].

At the top floor lantern you can step out onto a deck and take in the 360 degree view.

The View West down Congress Street to central Portland

The View North/Northeast and Casco Bay

Talking with the docents at the lantern I now have a tip as to where to visit on a future trip to Portland : The International Museum of Cryptozoology!