Those of you with a literary bent will recognise both titles from the one above and surmise, quite correctly, that I have been staying in Florence recently.

In December an email from the Landmark Trust slipped into my Inbox :

“Escape to Italy this winter with our special offer :

Reproduction of the 1861 Drawing Room painting by George Mignaty 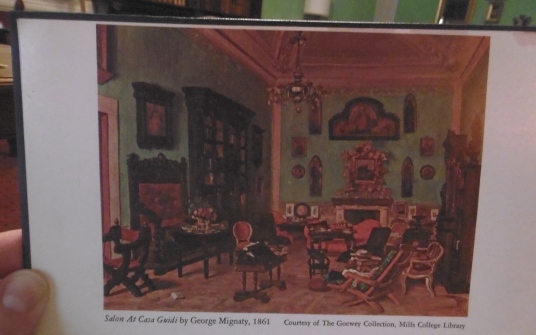 Clearer version in one of the Landmark Library books.

In fact, in the end, we were just two. I quickly chose and booked the 4 nights 22 to 26 February, asked a friend to join me and booked flights from Heathrow to Pisa and from there a Terravision coach to whisk us into the centre of this, even in February, when it is very likely to rain (and it did at some point each day), beautiful treasure-house of a city. 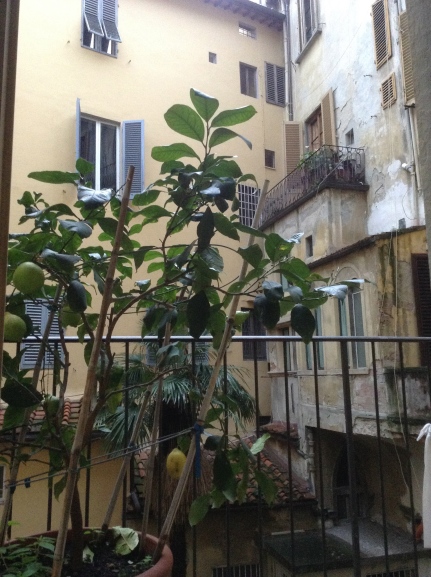 The rear courtyard behind Casa Guidi

And not just the city … but to stay in the restored grand apartments where once the Brownings – poets Robert and his wife Elizabeth – were accommodated between July 1847 and July 1861 (just a month after the death of his wife and Pen, his son’s, mother Robert and Pen left Florence and the Casa Guidi never to return). This was truly a unique opportunity not to be missed. To actually stay at a writer’s house (or two, for that matter) and be surrounded by books by and about them and furnishings similar to theirs and experience much of what they experienced was beyond my wildest dreams.

The streets outside and the view (such as it is) from the balcony have changed little during the intervening 150 or so years.

My reading matter for the journey and for the week (when I was not browsing the well chosen volumes in the drawing room itself) was Margaret Forster’s Lady’s Maid (doubly relevant since MF had recently died in early February). This excellent book combines fact and fiction and tells Elizabeth Barrett Browning’s story through the eyes of her devoted maid, Lily. Another more light hearted read is Virginia Woolf’s ‘Flush‘ EBB’s story as if told by her pet spaniel of that name. I recommend both books. 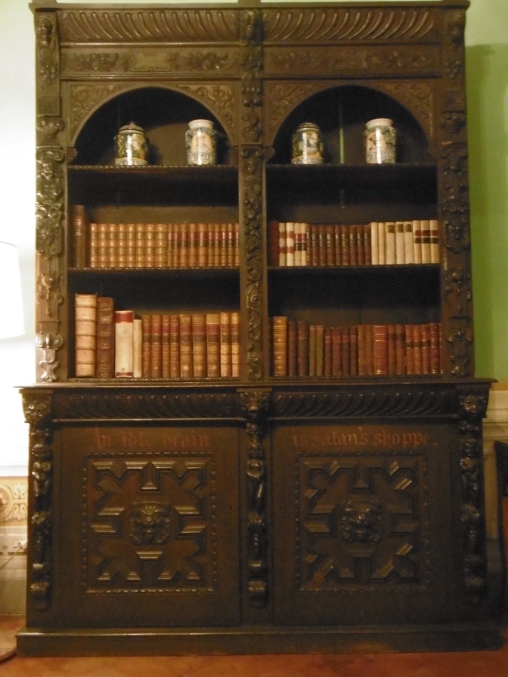 An Idle Brain is Satan’s Shoppe

From the Casa Guidi library I was interested to read the chapter concerning the author’s visit to Casa Guidi in”The dead one touched me from the past: a walk with writers through the centuries” by Art Seamans. Seamans, a Canadian, I believe, records his visits to authors’ homes in Europe and North America. 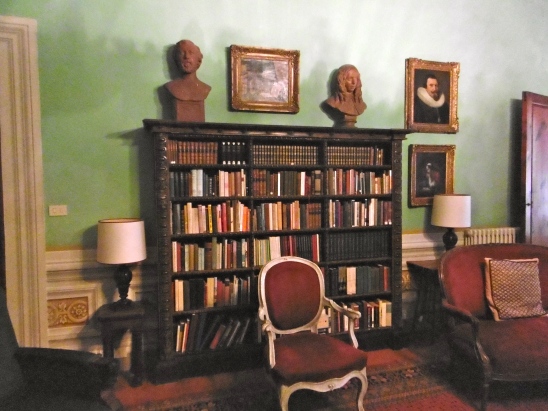 He had trouble gaining access to Casa Guidi but I expect he was unaware of the fact that it’s let privately for holidays and has very limited opening hours during just the summer months.

“We entered the door to the ground floor into an atrium, the floor of which was composed of uneven tiles. A bust of Robert Browning and a staircase leading to an upstairs apartment were all that we noticed.

Although we searched the area, we could see no signs announcing the Browning museum located in the old Browning rooms. Our experience was hardly unique, for many visitors to the Browning’s ended in frustration since the Brownings absented themselves almost half of the time they spent in Italy. Visits to Lucca, Rome, Paris and England took them away frequently from their home here. Not that we missed seeing anything dramatic. Reports describe a cluster of rooms and a balcony. Besides servants’ quarters and kitchen, there was a huge bedroom with a huge secondhand bed Browning had purchased. … [I don’t think the bed I slept in, and where Pen was born, was this original one!] 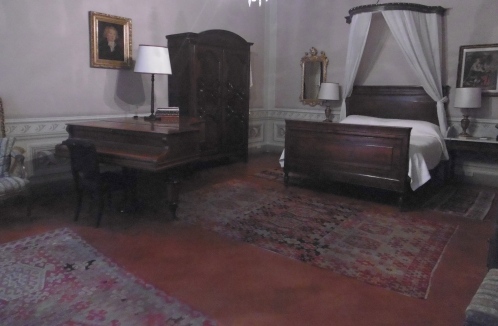 Visiting the Brownings was a disappointment for those who wished to be served something besides tea. …

There was not much here, yet this small apartment has become a symbol for what proved to be Elizabeth’s own Promethean stance. History would not repeat itself, but Elizabeth’s struggle proved even more difficult than Byron’s, for her struggle pitted one love against another love. At age 40 Elizabeth had to choose between the security and love of her family, particularly that of her father, and the untried love of the fledgling poet named Robert Browning. She chose the latter but it cost her the former.” 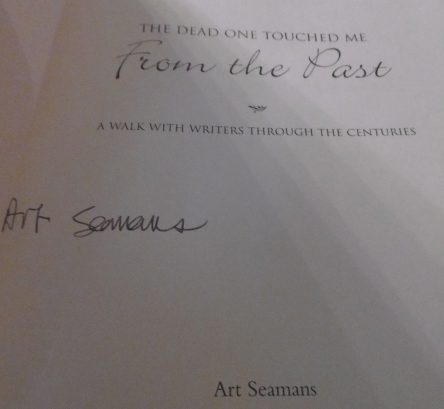 Anyway, he was good enough to donate a signed copy of his book to the house.

I should perhaps make reference here to the poem Casa Guidi Windows which was written at Casa Guidi  :

“Advertisement to the first edition of Casa Guidi Windows

This poem contains the impressions of the writer upon events in Tuscany of which she was a witness. “From a window ” the critic may demur. She bows to the objection in the very title of her work. No continuous narrative nor exposition of political philosophy is attempted by her. It is a simple story of personal impressions, whose only value is in the intensity with which they were received, as proving her warm affection for a beautiful and unfortunate country, and the sincerity with which they are related, as indicating her own good faith and freedom from partisanship.

I think it was also Art Seamans, but it could have been another, who commented that the house has the most memorials to and quotations by its former inhabitants than any other he had visited. This is very true! 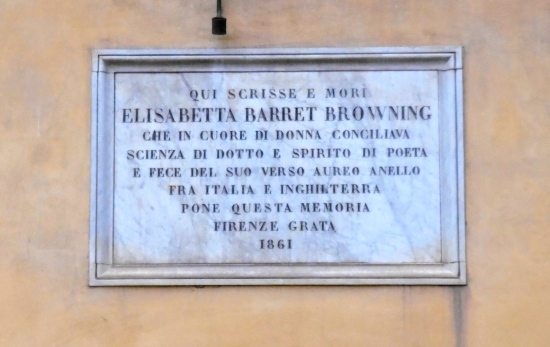 Although Seamans called on the wrong day or at the wrong time of year there is in fact a small room that serves as a ‘museum’ to the two poets and contains the sofa upon which Elizabeth languished at her father’s home, 50, Wimpole Street in London, a glass case containing some mementoes, busts and other memorabilia. The study, dining room and sitting room are open to the public between April and November on Monday, Wednesday and Friday afternoons from 3pm to 6pm. The number of visitors is usually small and the housekeeper organises the opening. 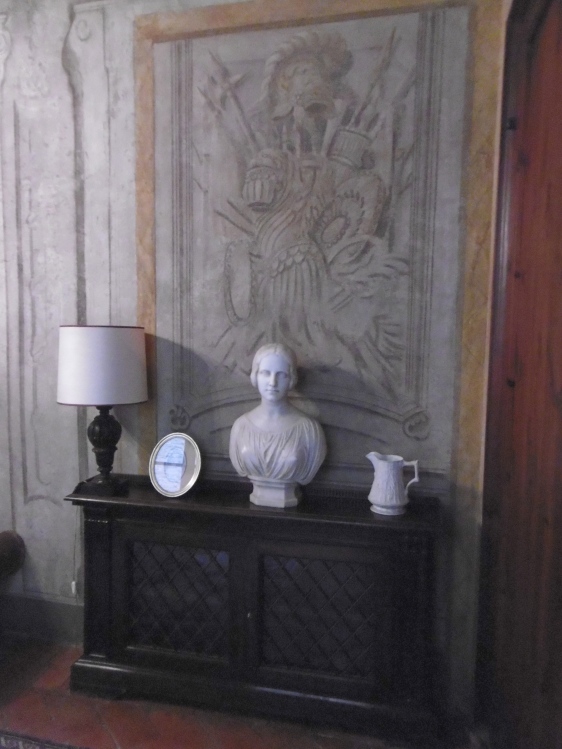 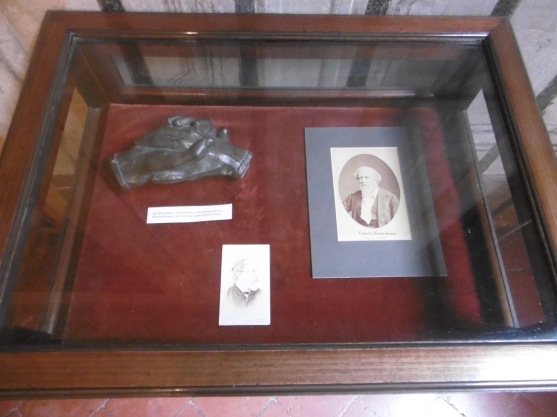 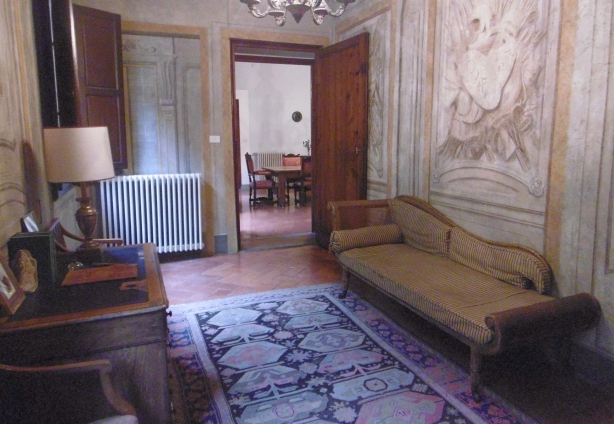 Enfilade from Museum to Bedroom via Dining Room and Drawing Room

Casa Guidi at 8, Piazza San Felice is situated in the Oltrarno district of Florence. The area just south of the river and approached by the bridge Ponte Vecchio and Ponte Santa Trinita. It’s a quiet area with lots of intriguing antique shops, the English church dedicated to St Mark, the famous Spirito Santo church (built but not finished by Brunelleschi c1440s) and some very good restaurants of which we visited three : Ristorante Ricchi; Casalinga and Osteria Spirito Santo. All of which we would recommend. 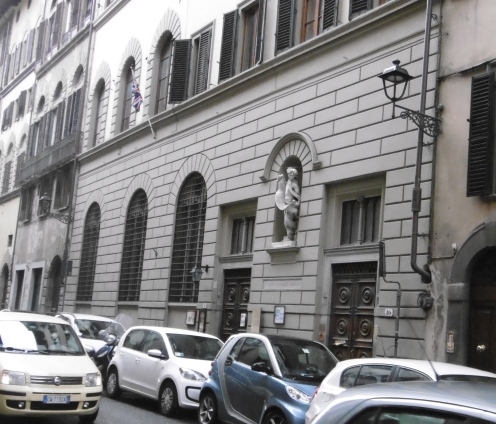 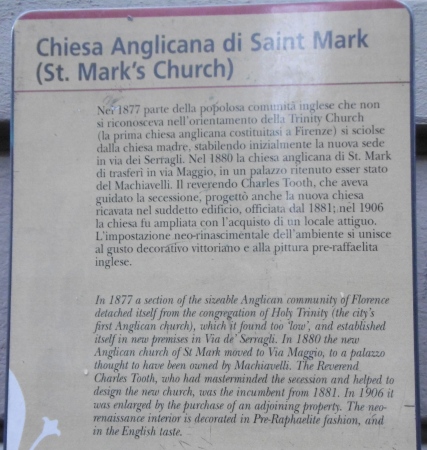 Casa Guidi is also just a stone’s throw from the Pitti Palace and the Boboli Gardens (about which more later).

18 comments on “A Room with a View : Casa Guidi Windows”