On a previous visit to South Wales I picked up an older edition of this leaflet. My original copy has no date and listed only 15 churches. The new leaflet now includes 17 the additional 2 being Wernffrwd, St David’s and Penclawdd, St Gwynour. Both in north Gower and neither of which we visited. Quotations, in italics, are taken from my Churches Trail leaflet.

The first church we visited was St Mary’s in the centre of Rhossili, as we set out on our initial walk. 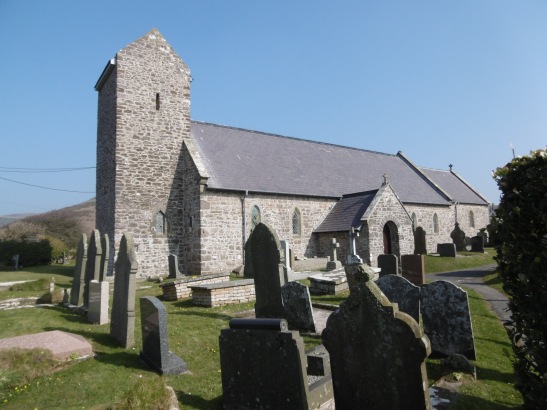 The church was built by Anglo-Norman settlers around the year 1200, and has a saddleback tower. The doorway surround is a fine example of late Norman work, rare in Wales and unique in Gower. Being obviously altered at the apex, it is thought to have come from the original church in the sand dunes below the village, excavated in 1980 and covered over again. A scratch sundial can be seen on the left side of the arch. 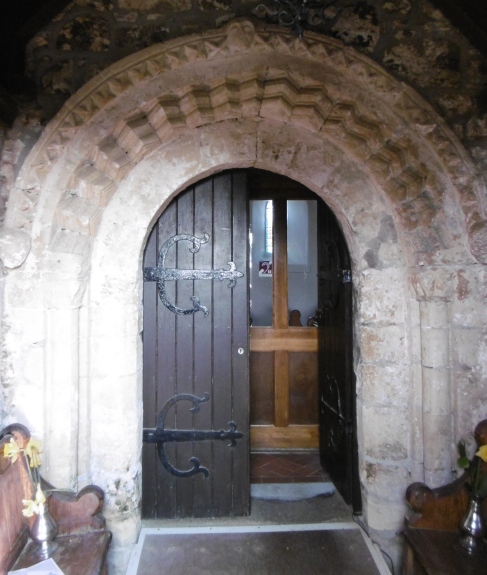 The nave contains several stained glass windows and memorials, including one to Petty Officer Edgar Evans, a Rhossili man who died with Captain Scott in the Antarctic in 1912.

The chancel has a low side or leper’s window [so that lepers could watch the services without risk of spreading infection] and the churchyard has graves with inscriptions going back to 1784. 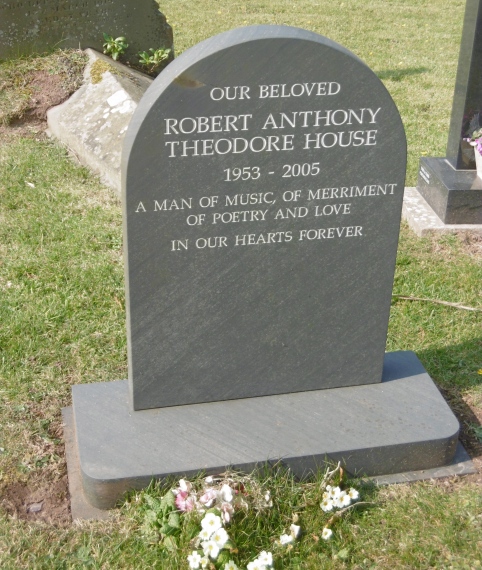 A Rather Nice Epitaph

After our Llanmadoc Walk we ventured up to the church, St Madoc’s. 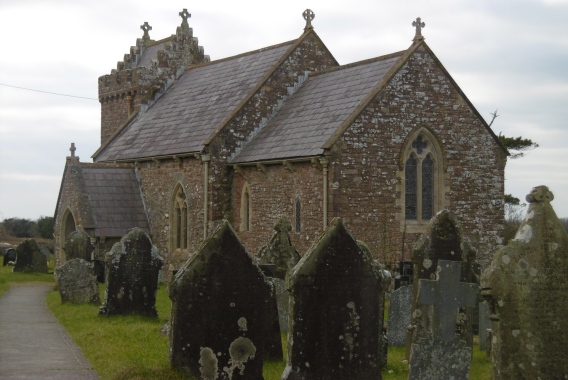 St Madoc is reputed to have founded a church here in the 6th century, and the present building is 13th century. Set in one windowsill is a lettered stone dating from the 6th century which was discovered in 1861 in the walls of the old parsonage house, and commemorates ‘Advenctus son of Guanus’. In the west wall is a crude pillar cross and a boundary marker dating from the 7th to 9th centuries, whilst the font is probably Norman.

During the 12th century the parish was controlled by the Knights Templar, before passing to the Knights Hospitaller of St John of Jerusalem, though no visible evidence now remains of this. The Rev J D Davies, a skilled woodcarver, was rector here from 1860 to 1911. He carved the oak altar frontal and led the major restoration begun in 1865. 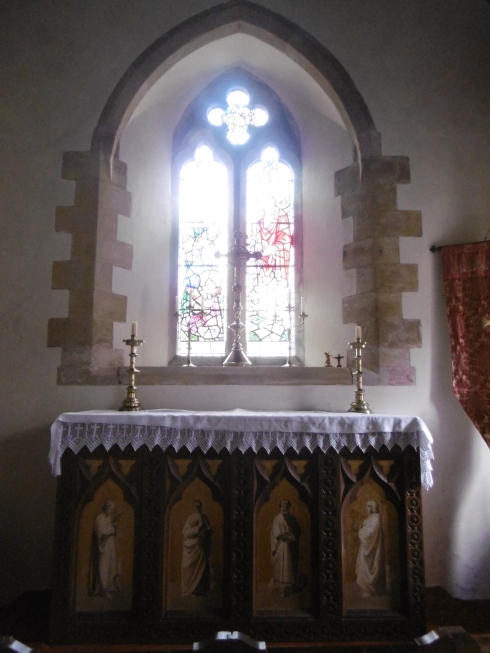 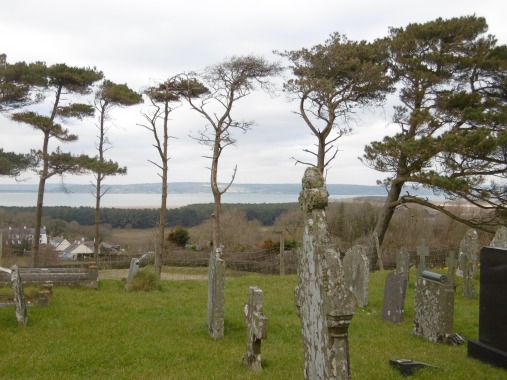 On Sunday afternoon we decided on a little tour to the areas we had missed. We started with a stop at Cefn Bryn viewpoint with all round Gower views and then proceeded to the pretty north Gower village of Llanrhidian and St Rhidian & St Illtyd’s church.

The original ‘Llan’ probably dates back to the 6th century, as there was once an inscribed stone (now lost) in the area. The tower and chancel are 13th century and the nave was rebuilt in the Victorian era. 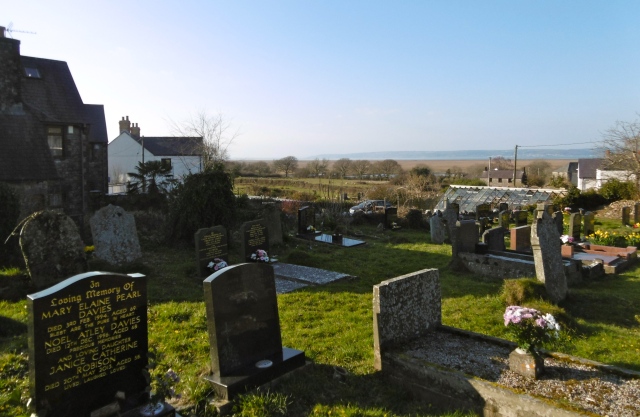 View over the estuary from the graveyard

A large stone block named ‘Parson’s Bed’ tops the massive west tower, which was originally a fire beacon to give warning of enemies approaching by land or sea.

In the porch is a ‘leper stone’ bearing representations of human and animal figures. This was discovered buried near the tower and is dated back to the 9th or 10th centuries. It might have Viking origins, being possibly a hog-back tombstone. On the green outside are the remains of an 11th century wheel cross known as the ‘Pillory’ or whipping stone.

Ancient Gravestones Attached to the Exterior of St Rhidian’s

Unfortunately, when we reached the church it was locked. Another visitor told us about the Viking stone and we were disappointed not to gain access. 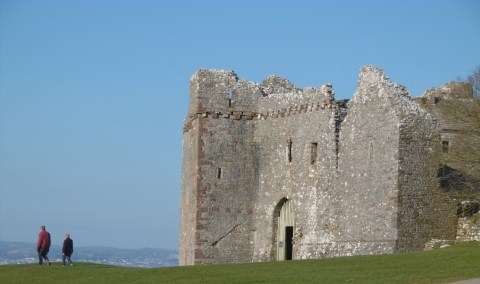 Cheriton church, St Cadoc’s,  is known locally as The Cathedral of the Gower. Unfortunately, again, we were unable to gain access to the church, nor even to the churchyard, since it is currently undergoing major repair work. 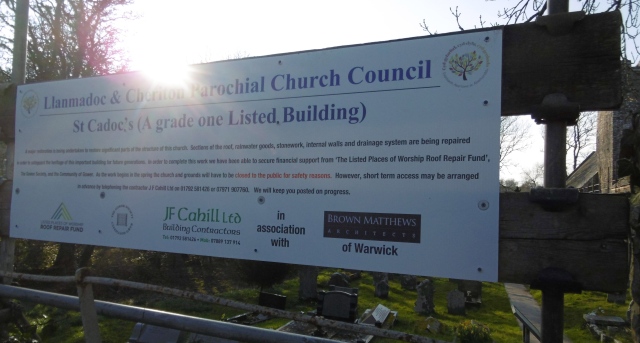 The tiny ‘Cathedral of Gower’ was probably built in the early 14th century to replace the one at Landimore, abandoned due to the encroachment of the sea. The tower, without transepts, is between the nave and the chancel, an uncommon design in South Wales.

The doorway is a fine example from the Decorated period. The norman font is said to have come from the old church. The old rood loft entrance can be seen above the pulpit. The church was restored in 1874 by the famous Gower historian, Rev J D Davies, who personally carved the choir stalls, altar rails, altar and the embossed wooden ceiling. He is buried by the south wall in the churchyard, near Ernest Jones, disciple and biographer of Sigmund Freud, and husband of Morfydd Llwyn Owen, a singer and composer of note.

So we hastened on to our third and final church of the afternoon St David’s in the middle of a farmyard at Llandewi. 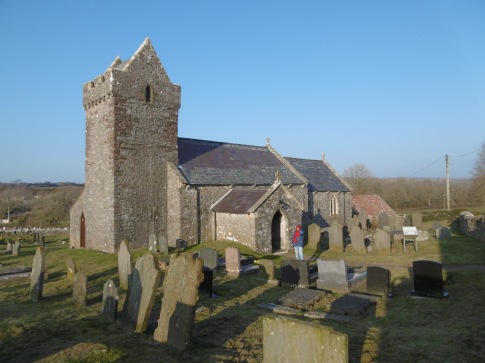 The church is said to have been built by Henry de Gower, a 14th century Bishop of St David’s. The chancel is not in line with the nave but inclined to the south: there is a theory that this is a ‘weeping chancel’, deliberately built as a reminder to worshippers that when Christ was crucified, he leant to one side; or may simply mean that the chancel and the sanctuary were built at different times. 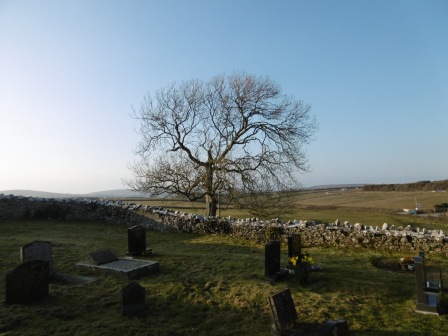 The windows of plain glass allow fine views. The memorial slabs are of interest, the oldest being to the vicar, Rev Silvanus Prosser, who died in 1737. The tower has a saddle-back roof and houses a single large bell. Restoration work was carried out in 1876 and 1905, when the squire’s seat, in the form of a west-end gallery, was removed from the nave.

The church is only open between Easter and October – we were a week early! 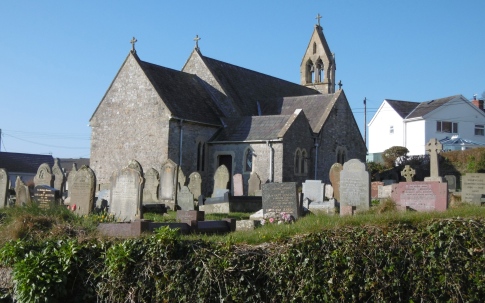 Finally, just before leaving Port Eynon on Monday morning, we decided to have a quick look round our own church, St Cattwg’s. When we tried the door it was locked but a villager arrived and fetched the key-holder who lived nearby and who filled us in with some local information.

“On New Year’s Day 1916 the Port Eynon lifeboat Janet launched at 11.45am to the aid of the SS Dunvegan which was in difficulties in Oxwich Bay. The storm force conditions were described as the worst in living memory.

On completion of the service, the Janet attempted to return to Port Eynon but huge waves capsized her twice and three crew were lost – Coxswain William (Billy) Gibbs, second coxswain William Eynon and George Harry.

With their oars and mast gone, the ten survivors drifted through the night until making shore in Mumbles at daybreak, after more than twenty hours at sea in atrocious conditions.

A memorial statue of a lifeboatman was placed outside St Cattwg’s Church in Port Eynon as a tribute to the brave three. It remains standing a 100 years on, its gaze forever searching seaward.” 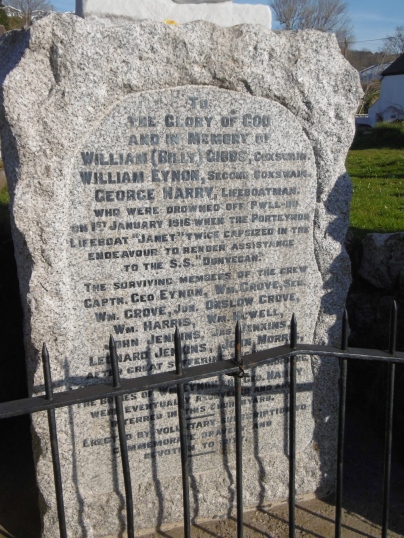 The church was founded in the 6th century by St Cattwg’s missionary to Gower, St Cennydd. The present building dates from the 12th century and was given to the Knights of St John by Robert De La Mare around 1165. The doorway is probably 16th century, and the holy water stoup in the porch is said to have been given by a Spanish sea captain in gratitude to his rescuers. 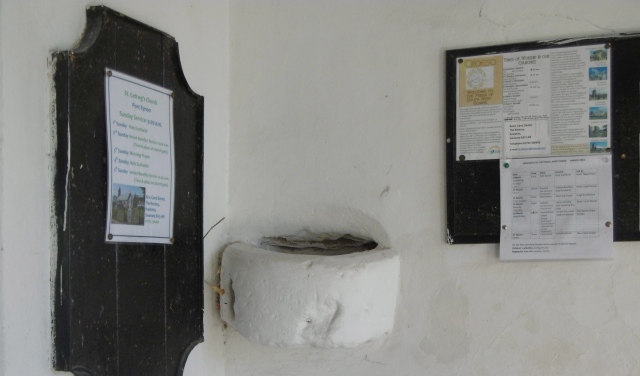 The Stoup in the Porch

In the south wall of the chancel is a blocked up leper’s window which can be clearly seen from outside the church. During alterations in 1861 the gallery in the nave was removed and the west end enlarged to accommodate the parish’s growing population. The stained glass windows are by Celtic Studios and Glantawe Studios, two leading Welsh firms of the 20th century. There are other memorials of interest to discover in the church and churchyard.

And here endeth my report of our Gower Churches Trail.

5 comments on “In the Steps of the Saints : A Trail of Gower Churches”