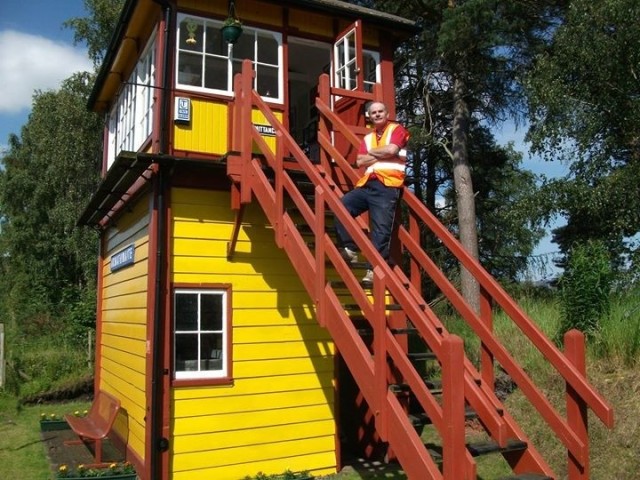 John at The Signal Box 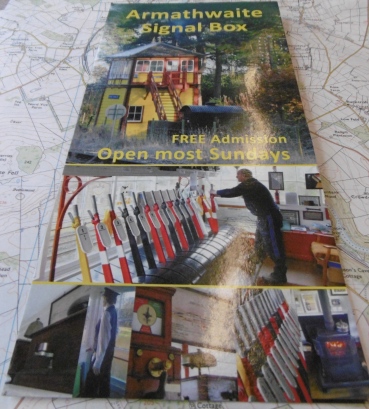 I’m sure I’ve never been in a signal box before and, although the visit and walk is repeated each year in the Friends of Settle Carlisle Line (FoSCL) Walks Programme, until yesterday I’d not been able to make the trip. When the programme came out at the beginning of the year I pencilled a few choices into my diary so that I wouldn’t forget and the Armathwaite visit was one of these.

However, weather-related events during the winter have badly affected the railway line and the whole section between Appleby and Carlisle has been closed and will remain so until at least Christmas. Bus replacements are currently in place between Appleby and Carlisle and Appleby and the intervening stations. I checked the FoSCL web page to make sure that the trip would go ahead and booked my ticket the day before ready for the early start and long journey up to Cumbria. 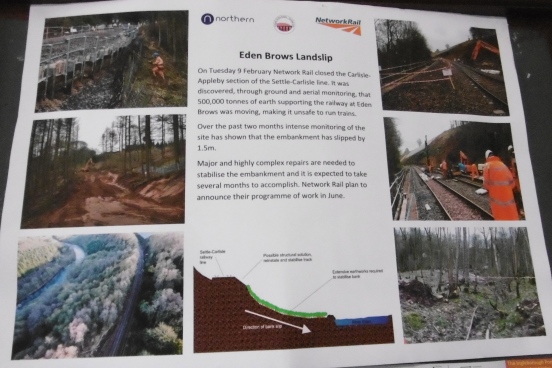 Last Monday I read about the landslip at Eden Brows at Settle Station but I understand that a further two slips have occurred at other locations between Appleby and Carlisle and some movement is still taking place. As far as I understand repair work has not started yet. But back to the signal box :

“[The Signal Box was] opened on the 16th of July 1899 and closed on the 15th of January 1983. … [It] is still owned by Network Rail, but it is classed as a ‘non-operational heritage asset’. It was leased to the Friends of the Settle Carlisle Line (FoSCL) in 1992 and it has since been fully restored to its Midland Railway appearance (the yellow-and-red paint scheme is authentic). It is now maintained by a small but dedicated group of FoSCL volunteers. The original lever-frame is still in position and the signal box has been furnished with a number of interesting exhibits relating to both the signal box and to the famous Settle-Carlisle Railway that runs right alongside.” More info here and here. 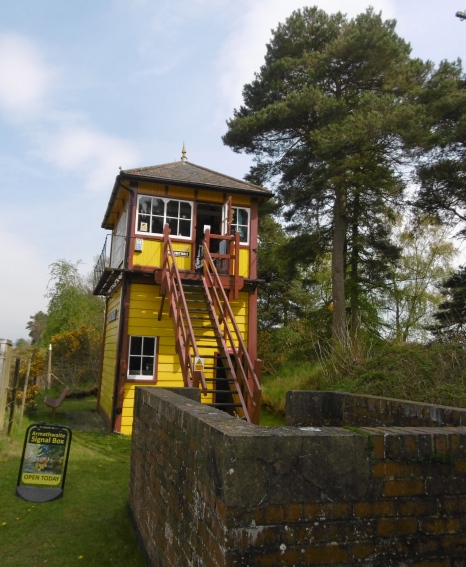 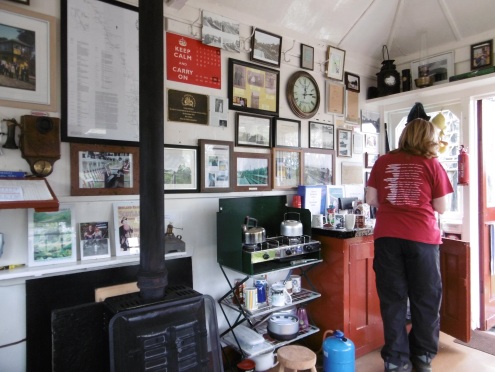 Displays inside the Box 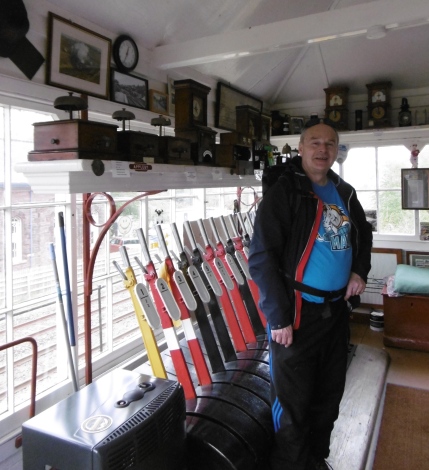 John and the Levers

John and Tracey, who currently have the guardianship of the Box, were at the deserted station to meet 3 of us from the bus and we were joined by a couple of other local walkers making seven of us in all. 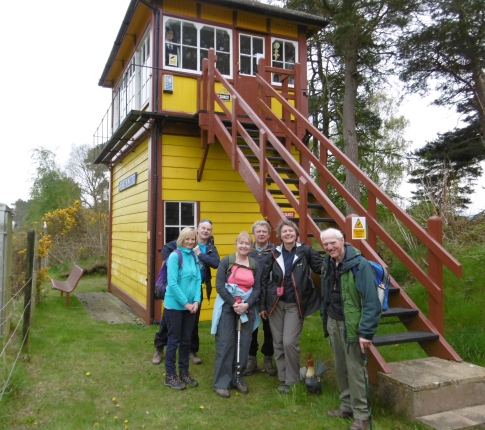 We spent about three quarters of an hour in the Box hearing about its history and other events from John; and were offered refreshments by Tracey. We also ate our lunch there as our time in Armathwaite was shorter than the original plan due to the need to take a bus back to Appleby in time for the timetabled train connection. 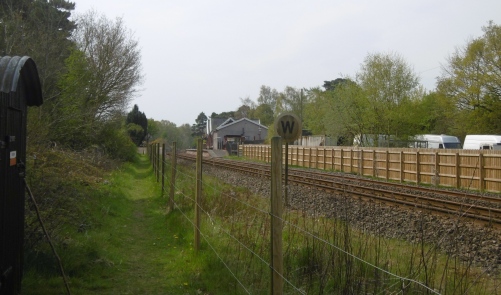 Leaving the Signal Box and heading back towards Armathwaite Station

We set out from the station on our seven mile walk, passed the local pub, crossed the River Eden and headed up, up up through Coombs Wood. I was told that The Forestry Commission long term plan here is to remove many of the conifers and introduce more native British trees. We noticed quite a lot of trees had paint bands round their trunks and these are the ones that are staying :

“The paint marked trees are those we want to keep for a long time to come to grow large and produce seed and shelter. We will open these trees up by felling a couple of trees around each of them to give them more room to grow.” [Forestry Commission notice] 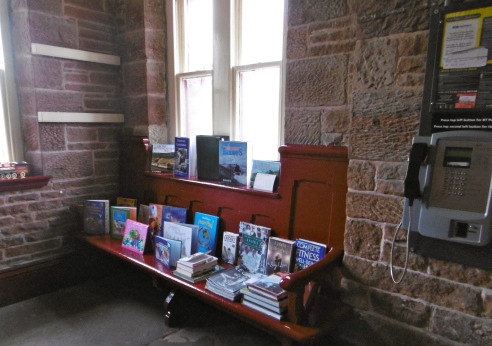 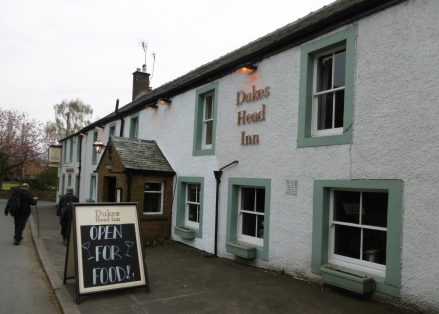 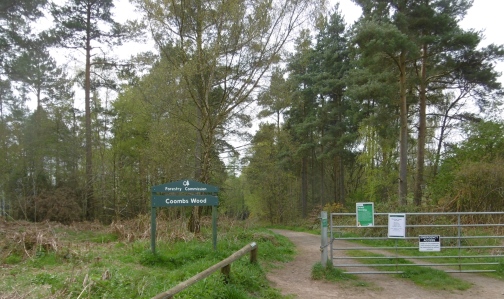 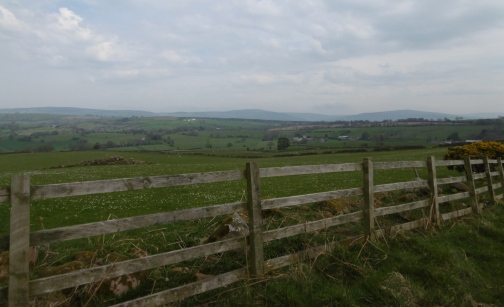 View from the highest point of the walk 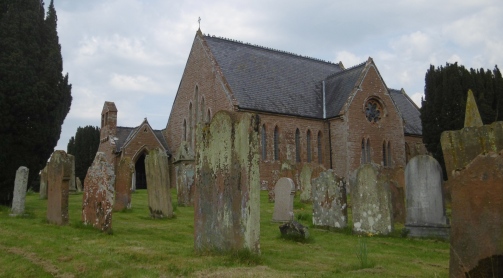 The walk continued along quiet country lanes, through Longdales and Bascodyke Farm to Ainstable church where we took a short break and returned across field paths to the River Eden and our starting point near the bridge. It’s a steepish climb back up to the station where just a few minutes after we arrived the replacement bus picked us up and I began my long journey homewards. A long day out – but worth every minute for the bonus visit to a signal box and the varied and beautiful walk around this, perhaps somewhat overlooked, area of Cumbria.

Thanks to John and Tracey for their welcome and enthusiasm for both the walk and the signal box and, of course, FoSCL for their great selection of walks every weekend throughout the year.