It was meant to be a quiet, stay-at-home, reading-in-the-boudoir week (most of October, in fact) but irresistible opportunities for travel turned up and I resisted none of them!

When friends asked if I would a share a day with them in Edinburgh I leapt at the chance. It’s possible to do the trip in a day from Leeds. I’ve done it before. I spent one Saturday in August six years ago at the Edinburgh International Book Festival, which is just confined to the limits of Charlotte Square.

I highly recommend a visit. But the day turned out to be an extremely long and exhausting one so the following year I booked to stay at a B&B in Saxe-Coburg Place in Stockbridge. That worked out much better. Since then the SCP place has become a self-catering apartment so this time I looked for, and found, an Airbnb on Dundas Street in the New Town (UNESCO World Heritage Site). SCP was walkable into the city centre but DS is even more convenient. My first floor room, at the back of the building, was also calm and peaceful.

I arrived last Sunday afternoon, walked from Waverley Station and checked in at 3pm. This gave me plenty of time to walk to lovely Charlotte Square and visit the Scottish National Trust property The Georgian House.

English NT members gain free entry and the tour begins up on the second floor where we watched a short film about the family who owned  the house. You can see Living in a Grand Design for yourself here :

From the second floor we descended down to the basement passing through the first floor Drawing Room and Parlour, the ground floor Bedroom and Dining Room and the Basement Kitchen and Servants’ Quarters. Volunteer Room Guides were on hand in each room to answer questions and point out the unusual and unexpected.

Taking Tea in the Parlour 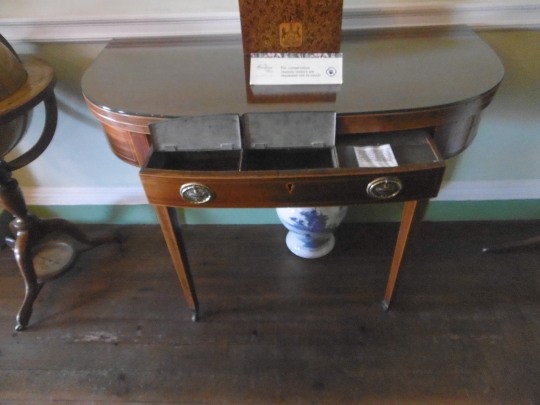 The Precious Tea was Kept Under Lock and Key

In the Drawing Room I asked about a painting of a folly – St Bernard’s Well – alongside The Water of Leith. Did the Well still exist? The answer was Yes, it does, and you can easily walk to it along the riverside footpath a short distance from The House.

I found the footpath and followed the alternative route back to my digs passing the Well on my way.

Water of Leith at Miller Row 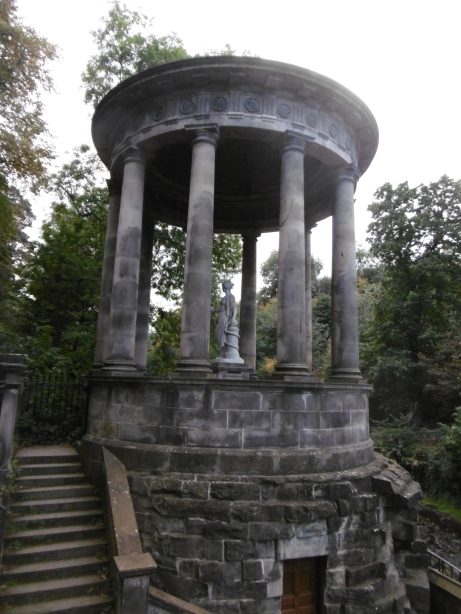 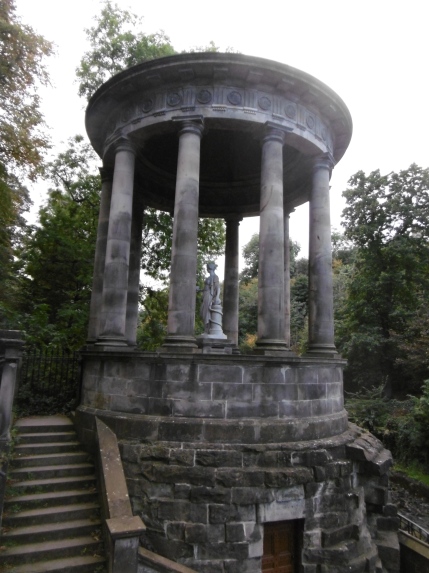 ““The chief ornament of this delightful valley” Alexander Campbell, 1801
A natural spring was discovered near the Dean Village on the Water of Leith in 1760, and was soon a visitor attraction as at that time ‘taking the waters’ was thought to be very good for the health.
Some claimed that the water could cure everything from a bruised leg to ‘total blindness’, but others described the taste as having the ‘odious twang of hydrogen gas’ or even like ‘the washings from a foul gun barrel’.
The building was designed by the painter Alexander Nasymth in 1789, and the statue inside represents Hygeia the Greek goddess of health.”

The building definitely reminded me of the Temple of Vesta at Tivoli.

The Water of Leith from India Place

The next day, after coffee at a Turkish cafe on Cannongate, we headed past The Scottish Parliament Building to The Palace of Holyroodhouse: a very historic house and our Queen’s Official Residence in Scotland.  We decided on the full ticket : The Palace State Apartments and grounds; The Queen’s Gallery and the special exhibition. 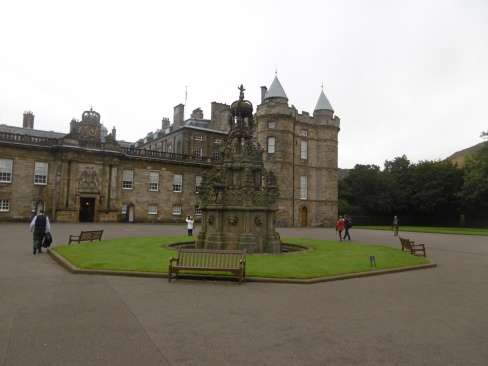 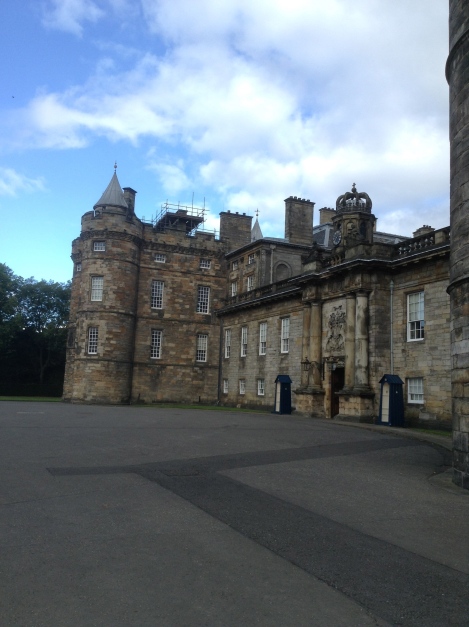 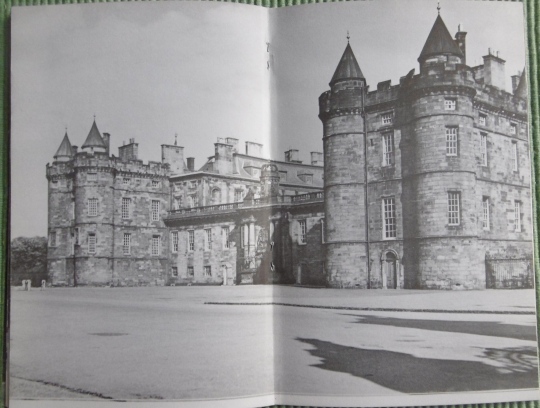 I assumed I had never been inside Holyroodhouse but when I came across an old guidebook to the palace I noticed that I had inscribed my name and the date 15.9.71 inside.

Inside nothing much had changed since the black and white illustrations in the guidebook were taken. Today the self-guided tour follows a different route. Widowed at 18 following her marriage to the French Dauphin Mary Queen of Scots returned to Scotland and took up residence at Holyroodhouse. It was here that her secretary David Rizio was murdered and you can visit Mary’s chambers in the oldest part of the house.

We just managed to catch the special exhibition ‘Fashioning a Reign’ which I believe ended last weekend.

“This exhibition marks the 90th Birthday of Her Majesty The Queen through a display of fashionable dress, spanning the period from The Queen’s childhood in the 1930s to the present day.

Highlights at the Palace of Holyroodhouse exhibition include stunning evening and day wear from British couturiers Sir Norman Hartnell and Ian Thomas.”

Follow this link to see the gowns and outfits that Her Majesty wore on particular occasions : family and state; Royal tours and the role of tartan in royal dress and Scottish designers.

We left the Palace by way of the grounds with views of Arthur’s Seat the hill above Edinburgh and a visit to the ruined Abbey.

The Abbey of Holyroodhouse

After lunch at the Cafe at the Palace in the Mews Courtyard we visited the lovely space of the Queen’s Gallery where the current exhibition is ‘Painting Paradise : Art in the Garden’. Follow the link to see the pictures and other works included in Painting Paradise.

“Whether a sacred sanctuary, a place for scientific study, a haven for the solitary thinker or a space for pure enjoyment and delight, gardens are where man and nature meet.

Painting Paradise: The Art of the Garden reveals the way in which gardens have been celebrated in art across four centuries. Bringing together paintings, botanical studies, drawings, books, manuscripts and decorative arts, the exhibition explores the changing character of the garden from the 16th to the early 20th century. Includes works by Leonardo da Vinci and Rembrandt van Rijn and some of the earliest and rarest surviving depictions of gardens and plants.”

Here is a stunning selection from the Royal Collection beautifully displayed and effectively curated; a wonderful contrast to the weather outside. A perfect day in excellent company in a special Scottish house.