It’s been some time since I last here, about a month by my reckoning. I’ve been busy not going away but, amongst other things, planning future excursions which take me way beyond next year, to 2020, in fact. Now it’s time to catch up with my most recent travels, including where I went after my day at Bedford Art Gallery.  I spent 4 nights at Alwalton in late February before moving on to Norwich and beating the  so-called “Beast from the East” back up to Leeds. Much of March disappeared under a blanket of snow but I did get down to London for a couple of nights last week.

Little Gidding in Huntingdonshire is but a hamlet, or grouping of buildings, which include the tiny church of St John The Evangelist and the utterly welcoming Ferrar House Retreat Centre. I love the description of it in Candida Lycett-Green’s in her “England: travels through an unwrecked landscape”. I’ve written before about places mentioned in this delightful book which visits obscure, but pleasing, places in England before.

“It is … an obscure and isolated piece of countryside, where flattish, watery pastures, wide-verged roads, low hedges and distant pylons abound. Farms stand on mild rises. Little Gidding floats between the level, zig-zag drained Fens to the east and the high-hedged, hunting country of Northamptonshire to the west.”

And thus, I eventually found it as did Nicholas Ferrar (right) in the 1620s “up a long-lost avenue of trees”. He founded a small community which lasted but 25 years although ever after it was a place of pilgrimage. Thomas Stearns Eliot (left) published his famous poem of the same name as the fourth and final poem of his Four Quartets in 1942 following his own pilgrimage. 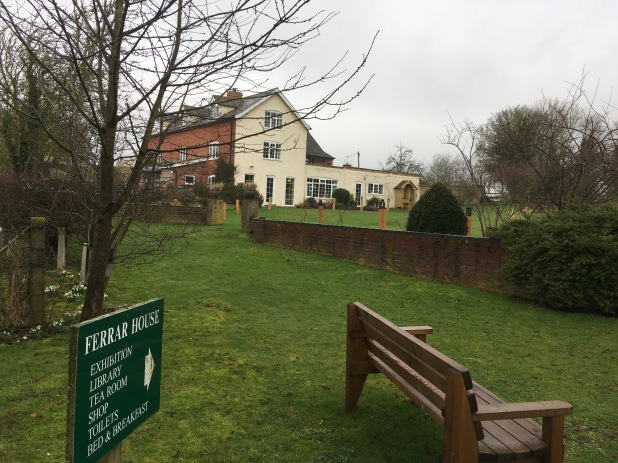 The Ferrar story is interesting and now, today, there’s a Retreat Centre based at the house. The key to the church is available from the reception and I was welcomed into the house, shown the various public rooms, the small shop and enjoyed some conversation with the receptionist.

The comfortable reading and sitting rooms of the Retreat Centre

Anyone may book in to stay overnight for bed and (do-it-yourself) breakfast. There are facilities for group retreats but the travelling public are equally welcome. The centre is now a recognised stopping-off point on the Via Beata (a way of blessing) a pilgrim route which crosses the country from east (Lowestoft) to west (St David’s).

The recently-erected Via Beata Way-Station at Little Gidding

With key in hand I made my way back across the sodden grass to the little church of which much has been written. Not least it’s been awarded two stars in Simon Jenkins’s ‘1,000 Best‘. Inside there’s no electric lighting; candles suffice.

Single rows of stalls face each other across the aisle 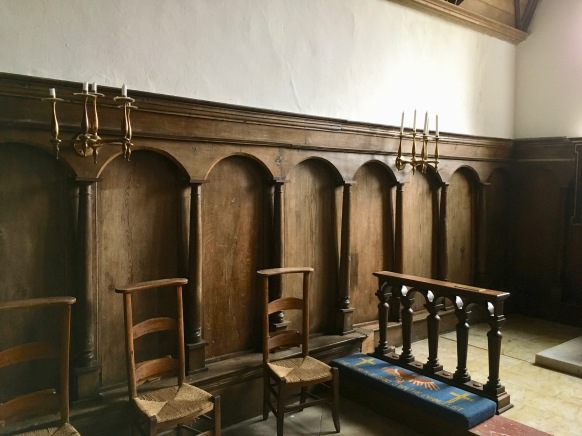 From Little Gidding I headed off in search of Mary Queen of Scots but disappointment lay ahead.

2 comments on “Pilgrimage to Little Gidding”