Ten years ago I visited the 60th Anniversary of the Folio Society display at The British Library. Suddenly, ten years later, its 70th birthday is being celebrated at the V&A. I LOVE Folio books. I have quite a few which I’ve collected over the years, mostly secondhand, some without their slipcases. Whenever my local Book Group decide on a classic book to read I search out the Folio edition to read. They are just so pleasant to handle, comfortable to read, have clear, easy to read type printed on quality paper and a great deal of care and attention to detail has gone into the illustrations commissioned from professional artists. There’s a good selection at The Leeds Library. Long live The Folio Society!

END_OF_DOCUMENT_TOKEN_TO_BE_REPLACED

“Mr. Bennet, how can you abuse your own children in such a way? You take delight in vexing me. You have no compassion for my poor nerves.”
“You mistake me, my dear. I have a high respect for your nerves. They are my old friends. I have heard you mention them with consideration these last twenty years at least.”

What fun I had at The RedHouse this afternoon! And not just fun – I learnt a lot too. A few weeks ago I noticed a flyer for a History Wardrobe performance this Saturday, checked their website and knew that I had to book a ticket to see what it was all about.

Here is Lucy’s witty introduction to the presentation :

“This talk focuses on an often overlooked period in the history of healthcare, giving an overview of living conditions in late Georgian England that hardly squares with our usual picturesque view of Regency life. Details of home cures, quack remedies and crude surgery highlight the battle between science and superstition, putting the later medical advances into context. For those who feel faint after viewing a pregnancy corset or the leech jar, I do have plenty of ‘infallible’ Regency advice for good health and long life. And sal volatile.”

Interspersed with quotations from Austen’s books (Jane Austen loves hypochondriacs) Lucy entertained us for nearly two hours with details and examples of all kinds of diseases and dangers prevalent in Georgian England and how they were treated by dubious doctors and questionable quacks. 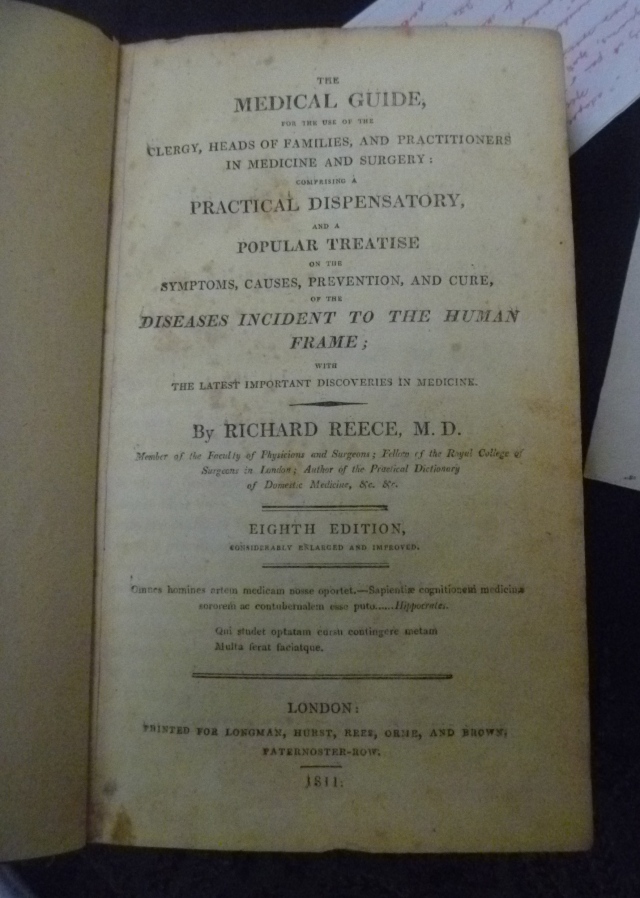 She read to us the list of diseases from which one could die in the late 18th and early 19th centuries – the list extracted from Doctor Richard Reece’s “The Medical Guide” of 1811 which, along with all Lucy’s other original and reproduction props, we were able to inspect for ourselves after the performance.

I am now highly enlightened on subjects as diverse as the dangers of red stockings (the dyes); that wallpaper killed Napoleon (arsenic); the extent of cholera epidemics and the locations of cholera burial grounds; body snatching (for medical dissection purposes); the benefits of a porringer of gruel (as recommended by Mr Woodhouse in “Emma“); the greatest danger for the Georgian militia and navy (disease); the biggest killer of women (childbirth); shifts and chemises; detoxing Georgian style; drugs and leeches; lancets and forceps; operating theatres and quack medicine.

The prize item in Lucy’s collection of historic costumes must be the original Georgian gown.

Lucy’s entertaining presentation this afternoon went to prove that history, science and medicine can all be fun.

She even made reference throughout to her new book in which, although titled “Great War Fashion“, she demonstrates that even by the early decades of the 20th century some clothes, medical treatments and aspects of hygiene had never changed.

Before I left the Red House I bought a ticket for another presentation next year – Titanic!

I’ve visited Lyme Regis on at least one occasion every year since I first came down to Branscombe in 2007. On several of the previous visits I’ve gone fossiling. Needless to say the five-year olds on these tours found many fossils and I found never found any. Of course, they are a lot nearer to the ground. That’s my excuse, anyway.

This year on the recommendation of one my readers I’d booked to go on a Literary Lyme Walking Tour on the theme of Jane Austen in Lyme Regis.

I should mention here that the weather on this August Bank Holiday Monday was simply appalling – wind, rain and high seas. This was such a shame at the end of summer and of most people’s holidays.

The arrangement was to meet at the anchor in the middle of town where the main shopping street drops down to the sea wall.

On a previous visit to the Town Museum I had noticed that Beatrix Potter had written and illustrated one of her longer children’s books here : Little Pig Robinson. I asked Natalie if she could pick out any of the locations featured in this book. She did and I made a note of these for future reference. 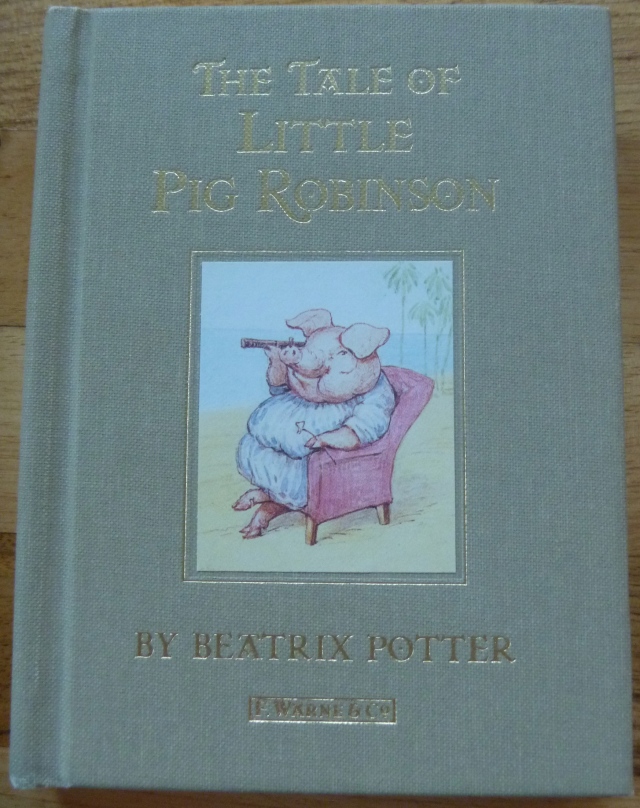 I had thought that I could probably work out a Jane Austen walk for myself using Google and Caroline Sanderson’s book A Rambling Fancy: in the footsteps of Jane Austen which has a chapter on Jane in Lyme but to have my own private and knowledgeable guide proved well worthwhile.

Using copies of old prints of the town Natalie Manifold (who is Literary Lyme) began our JA tour explaining the origin and history of the famous Cobb. The dates connected with The Cobb will prove to be important when we eventually arrive there!

Photo taken on a previous visit when the weather was as it should be!

Our first stop was just a few paces away on Coombe Street where the old post office stood. It’s now Old Lyme Guest House but a plaque on the wall records the PO fact and the old letterbox is still in situ. 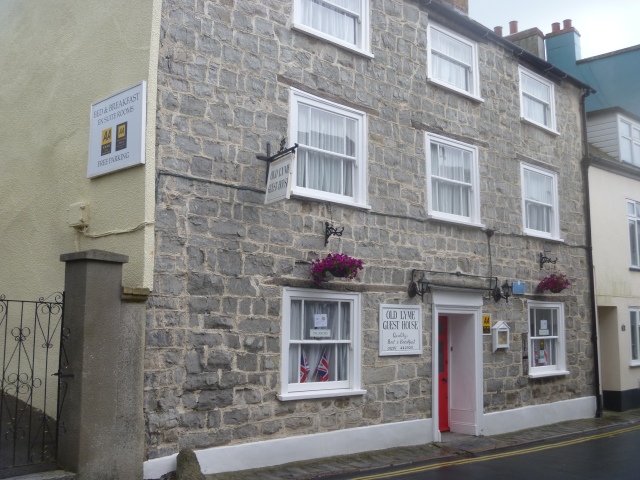 It’s said that at this very box Jane mailed her letters (single sheet and postage paid by the recipient) to her sister Cassandra after the latter had left Jane in Lyme in order to accompany other family members to Weymouth.

After a quick nod to Banksy (an origami crane with goldfish) we headed up Sherborne Lane. From there we arrived at Broad Street, Lyme’s main thoroughfare. Our next ‘Jane’ location was the now disused Three Cups Hotel which was Hiscott’s Boarding House in JA’s time and where she initially stayed on her visit to Lyme Regis. (Incidentally, it’s also the hotel where General Eisenhower stayed whist the D-Day Landings were being planned in 1945.) Jane also stayed a few doors down at Pyne House after several members of her family upped sticks and moved on to Weymouth.

A couple of steps from Pyne House Natalie showed me an old print of Lyme : 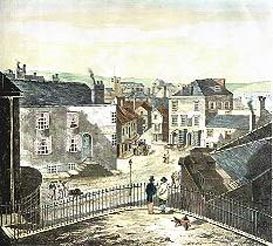 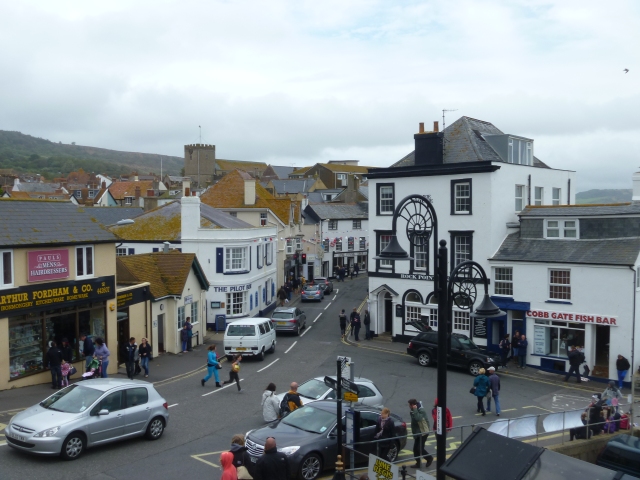 A walk along Marine Parade took us past a couple of blue-painted cottages named Harville and Benwick. Built after the publication of ‘Persuasion’ (the Austen novel in which Lyme features) they were named following Francis Palgrave‘s mistaken identification of these buildings as the homes of Captains Harville and Benwick. Natalie showed me the more likely candidates for these homes a little further along the Parade.

Harville and Benwick Cottages from The Jane Austen Garden

There’s a rather overgrown garden dedicated to Jane Austen but apparently all the references are wrong so it has been rather left to run to seed.

Finally, we walked along The Cobb. Not on the upper, exposed part but below at road level, and we studied the three sets of steps which have puzzled Jane Austen fans for some time. The set of “Gyn Steps” were not built until after Jane Austen’s time,

but Natalie maintains and insists (supported by a reading from the very passage in ‘Persuasion’) that these are the very steps from which Captain Wentworth failed to catch Louisa as jumped from the Cobb. 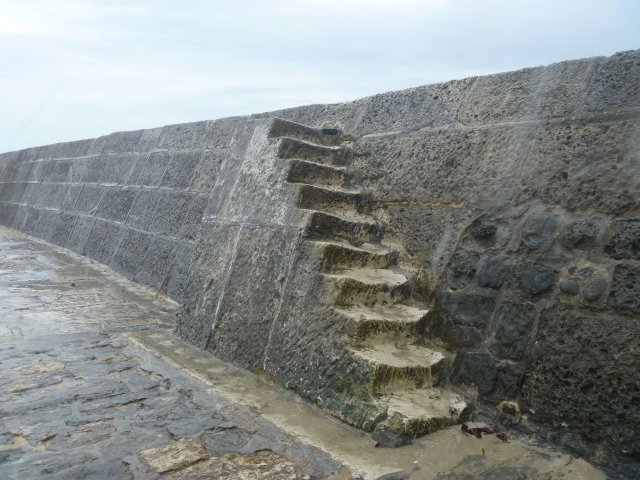 The walk ended here but we made our way back together to our starting point. A huge waved had blown right over the Cobb and soaked us both thoroughly and much as I would have liked to have investigated the Little Pig Robinson locations I decided that enough was enough and such pleasures must wait another day!