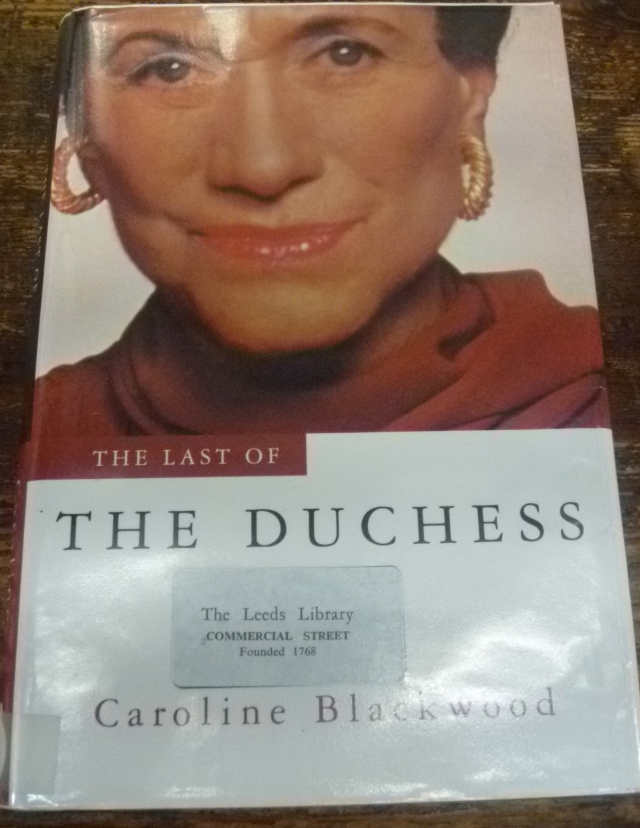 My interest in the Windsors dates back to earlier this year when I stayed at their weekend retreat near Paris, now handily converted for self-catering holidays by the Landmark Trust. Back in the spring I read this book and the biography by Michael Bloch “The Duchess of Windsor”, and the one by Hugo Vickers “Behind Closed Doors: the Tragic, Untold Story of the Duchess of Windsor” and then most recently Anne Sebba’s new biography “That Woman”. The authors of each book, it seemed to me, had an agenda and I still feel I am nowhere nearer knowing what the Duke and Duchess of Windsor were really like. Of course we can never ever know for sure! 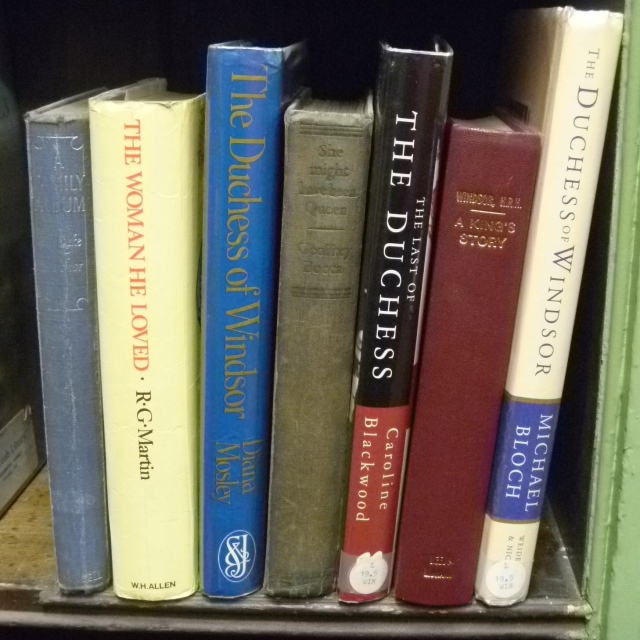 Reading the last sentences I realise that all my reading has concentrated on Wallis and not so much on Edward. I need to address that. I’m currently reading James Pope-Hennessy’s life of Queen Mary which will go a little way to adjust the balance. I think perhaps the library can help too! 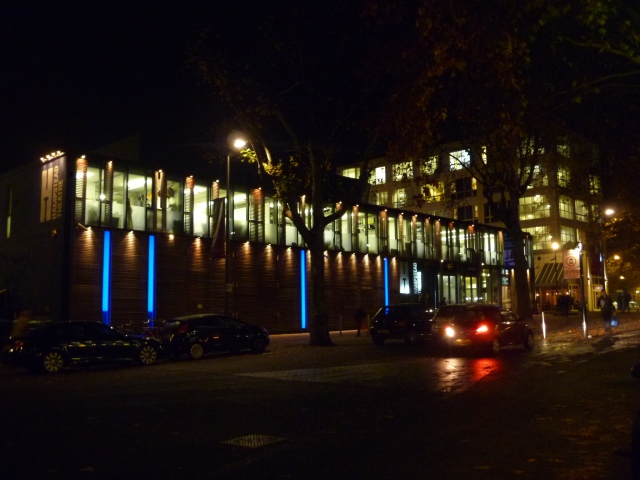 Last evening the Duchess was the main subject of the play I went to see at the Hampstead Theatre. This was a performance of the world premiere of “The Last of the Duchess” adapted by Nicholas Wright but based closely on Blackwood’s book.

I booked tickets when I came upon a link to it by chance via Google. At the time I was searching for more information about Lady Caroline Blackwood, the author of the book I had just read, back in May or June this year. At the time there was no inkling as to the cast but I knew that I wanted to see it. And anyway the theatre is just steps away from my elder son’s flat. 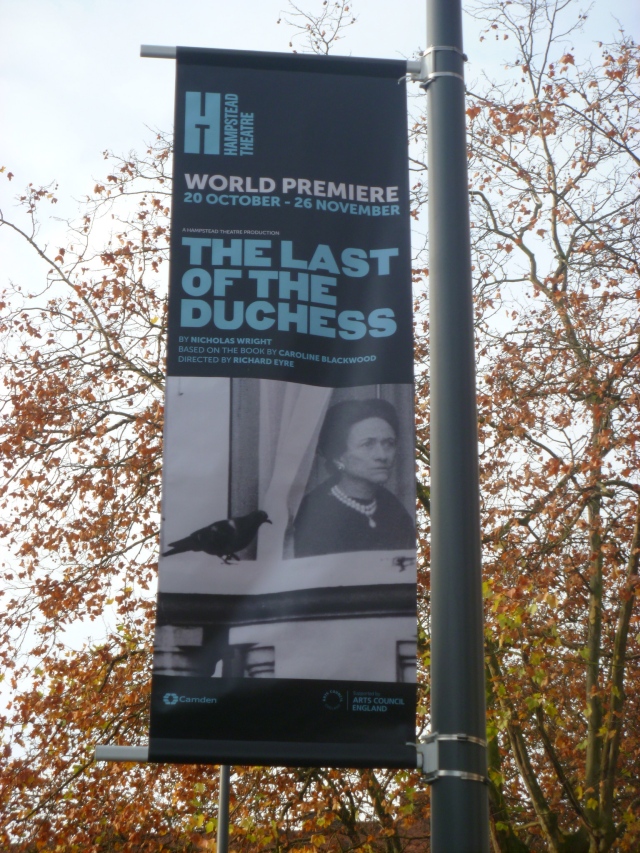 The casting was inspired. Sheila Hancock played, as if she were a Frenchwoman herself, the role of Maitre Blum, the Duchess’s Parisian lawyer. Her accent, her French, her dress and demeanor all had that je ne sais quoi of Parisian style that is so hard for Englishwomen to replicate. Of course, that meant that Caroline Blackwood , played so wonderfully by Anna Chancellor, would be the antithesis of the smart, immaculate, maybe teetotal, Blum. There were touches of humour throughout but the major protagonist of act two was Lady Diana Mosley who was played magnificently by Angela Thorne (great buddy of Penelope Keith in TV’s To The Manor Born). Mosley was a Mitford sister and close friend of the Duchess. At this period in her life she was profoundly deaf and forbidden by butler Georges, on instructions from Blum, to see her dear friend. 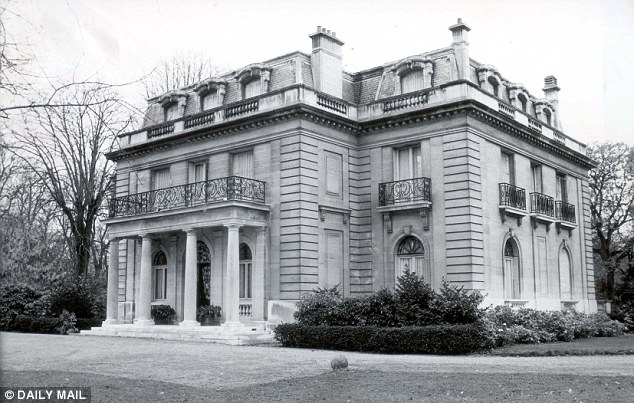 The setting is the house in the Bois de Boulogne leased to the Duke and Duchess by the City of Paris. The Duke has died some time before and the Duchess appears briefly at the beginning of the first act, in a kind of dream of Blackwood’s. That is the Last we see of her. From then on she is upstairs helpless in her bed as the arguments and contretemps continue below. Lady Caroline, thrice married  journalist, has come to Paris to interview the Duchess but Blum will have none of it. There’s a suggestion that Lord Snowdon has been appointed to take her photograph. This Blum forbids but somehow as a kind of bribe she manages to arrange her own photo shoot with Snowdon. This takes place offstage during the second act. In the final act Blum coolly responds to every accusation of Blackwood’s as she herself becomes more and more intoxicated. I came away from the play with the same feeling of uncertainty as after reading the book. Was Blum a consummate liar and villain or was she, in some strange way honestly  protecting the Duchess from exploitation? 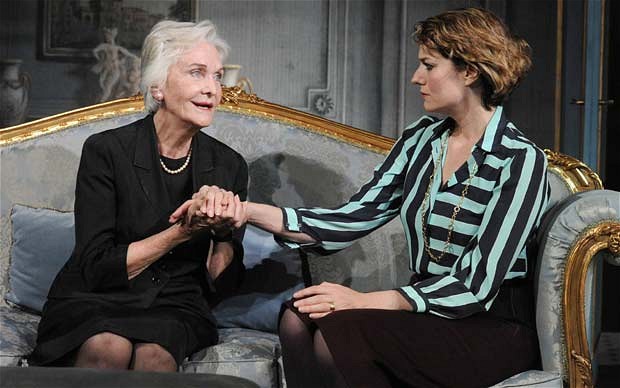 Photo from The Daily Telegraph (http://www.telegraph.co.uk/culture/theatre/theatre-reviews/8851278/The-Last-of-the-Duchess-Hampstead-Theatre-review.html)
As it turns out, in the end, it is almost the last of Lady Blackwood. She died only months after the publication of her book whereas the Duchess of Windsor was to live for a further 12 years.

2 comments on “Not The Last of the Duchess”