A walk through London’s historic legal quarter, exploring glorious hidden gardens, distinguished and ancient buildings and hidden alleyways. Venture into a private world where few walkers stray – unless they have need of a lawyer!.
This walk includes steps and ends at the river near to Temple Tube Station.” [Source] 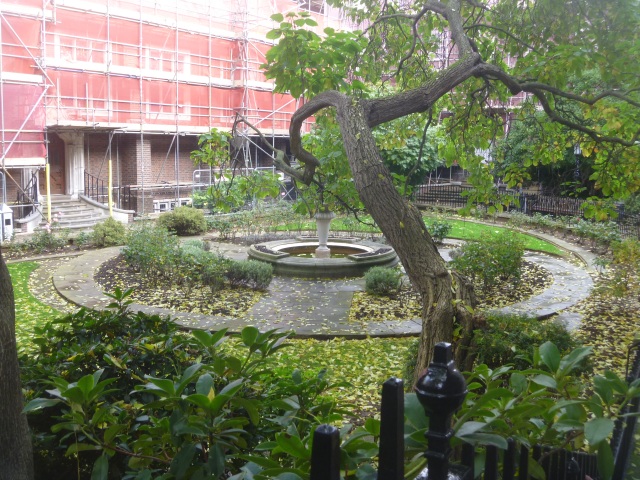 This was our choice of activity when I met my sister in London on Friday. Eight of us, including three French women, turned up at Chancery Lane Tube Station at noon just as the rain was stopping and the skies were brightening. We met Jackie who was to lead the tour and she took us just behind the station and into Staple Inn garden.

“Staple Inn was originally attached to Gray’s Inn, which is one of the four Inns of Court. The Inns of Chancery fell into decay in the 19th century. All of them were dissolved, and most were demolished. Staple Inn is the only one which survives largely intact. It dates from 1585.” [Source]

The name Staple Inn comes from the fact that the building (dating from 1585) was originally the wool staple where wool was taxed and weighed.

There’s a lot of building work going on here so we didn’t tarry, just had a quick look round and then headed straight over Holborn and into our second garden that of Gray’s Inn.  “The Inn is known for its gardens, or Walks, which have existed since at least 1597.” [Source]

Statue of Francis Bacon (1912) and The Holker Library

All of the gardens visited are havens of peace and tranquility and are just steps from the busy City of London streets. Gray’s Inn gardens are no exception. Dickens worked as a clerk here in 1828, and it features in several of his books including ‘David Copperfield’ and ‘Great Expectations’. There is a statue of Francis Bacon outside the Holker Library and through another arch and in another part of the gardens is an armillary – a form of sundial. 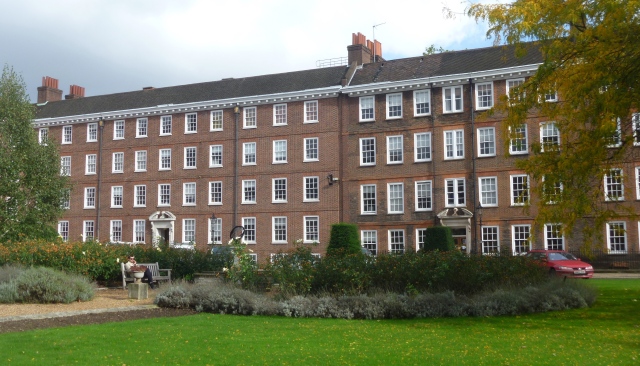 Back on the south side of Holborn is Lincoln’s Inn. Beautiful gardens surrounded by beautiful ancient buildings. On entering from Chancery Lane we came across a tiny ornate building which Jackie explained was the smallest City Grade 1 Listed building which had originally been built in 1860 for the man attending to law students’ horses while they worked : The Ostler’s Hut. 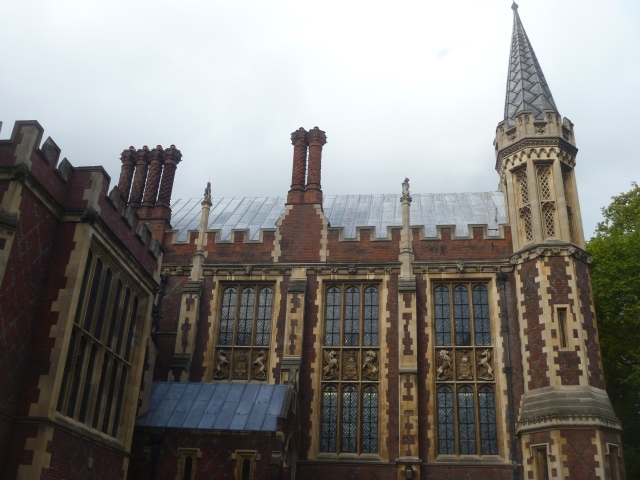 In Lincoln’s Inn we were able to go in the Chapel where the windows show the crests of the Treasurers from 1680 to the present day. The Treasurer is the head of the Inn and changes annually. 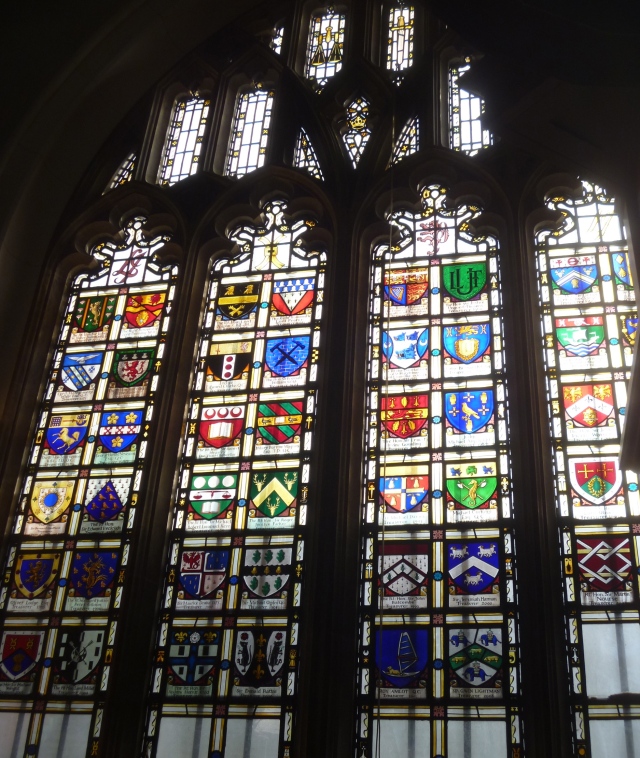 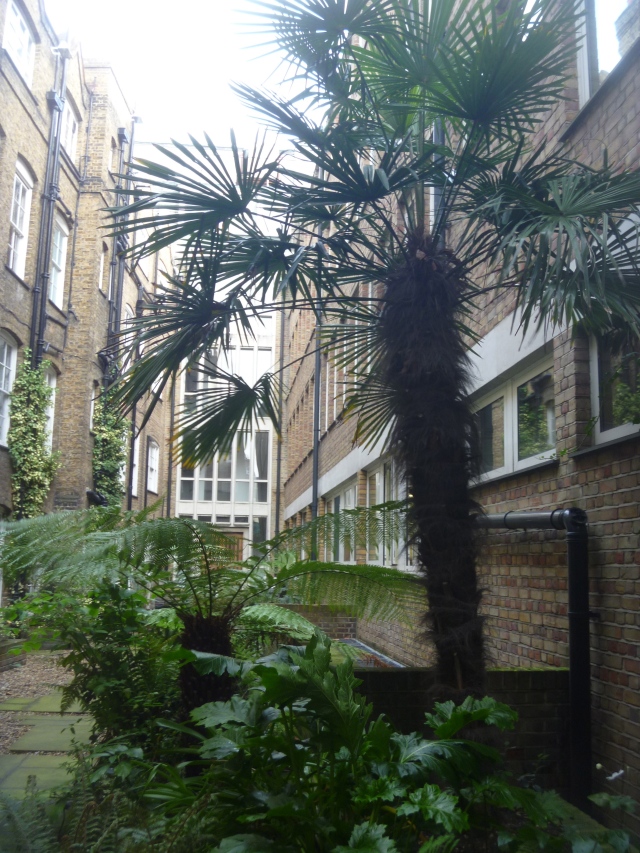 Leaving Lincoln’s Inn through Bell Yard we crossed Fleet Street and arrived at The Temple. It’s another fabulous place for a quiet picnic on a fine day although watch out for limited opening hours of some of the gardens.

Hare Court, within the Inner Temple, is home to several Chambers and some very comfortable benches. 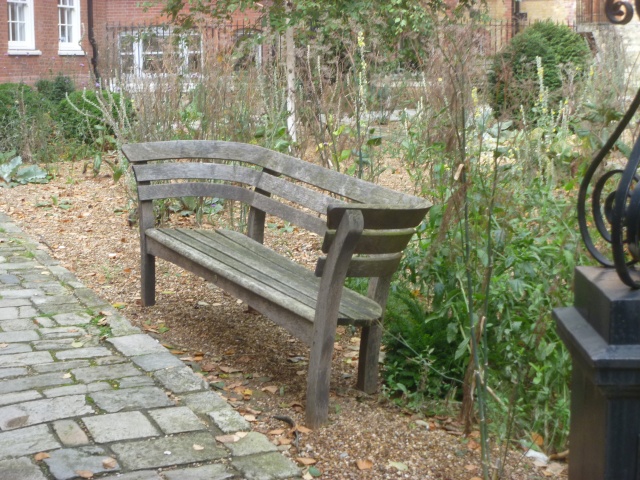 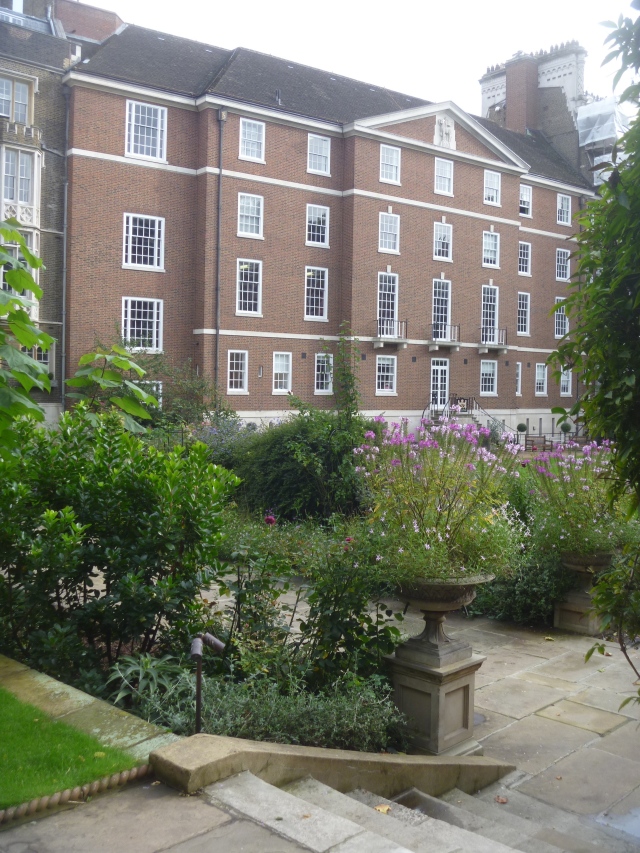 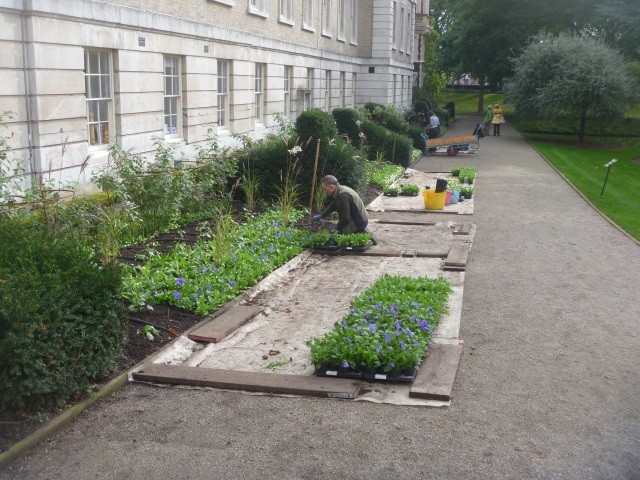 It was at this garden, almost on the banks of the River Thames, that our City Gardens Walk ended. What lovely and still colourful, despite the autumnal weather, tranquil oases for further discovery and appreciation. Just our kind of “Quiet London“. So it was back to the bustle of Fleet Street and off to find somewhere for a late lunch.

8 comments on “Garden Walks in the City of London : Gardens, Inns and Alleyways”