Last year I read ‘Dreaming in Colour : an autobiography’ by Kaffe Fassett. I’d always been aware of his knitting books and collaboration with Rowan Yarns of Holmfirth and vaguely knew that he had created some veggie designs for cushions for Ehrman but had been unaware of the person behind these enterprises and the prolific output and inspiration of the man. The Amazon Book Description sums it all up :

“Kaffe Fassett has led an extraordinary life and is a captivating storyteller with a vivid memory. Born in 1937 in San Francisco, he spent much of his youth in Big Sur, where his parents bought a log cabin from Orson Welles and transformed it into the world-famous Nepenthe restaurant, a gathering place of artists of all sorts. After attending a boarding school run by the disciples of Krishunamurti, an Indian guru, he studied painting on scholarship at the School of the Museum of Fine Arts in Boston, but left after less than one year and travelled to England, where he ultimately made his home. After struggling to make a living as a fine artist for several years, Fassett met the fashion designer Bill Gibb and began designing knitwear for his collection. He went on to design knitwear for Missoni and for private clients and to revolutionise the hand knitting world with his explosive use of color. Further explorations led him to needlepoint, mosaics, rug-making, yarn and fabric design, set design and quilting. Now in his 70s, Fassett continues to produce new work in his studio in London and to travel worldwide to teach and lecture. This intimate autobiography is lavishly filled with Fassett’s amazing stories about his bohemian childhood, his hard-earned rise to fame, and all of his creative pursuits. It includes photos of him throughout his life, his home (which is an artwork in itself), his work (everything from childhood drawings to pencil sketches, to oil paintings, to massive tapestries and set designs, to hand knits and quilts) as well as the people and places around the world that have inspired him.”

The Display that hits you as you enter the show!

So, inspired by this book and the riot of colour in Kaffe’s designs when I decided to drive down to Cornwall I thought it would be a good opportunity to see his work for myself. It’s currently on display at The American Museum in Bath until 2nd November 2014. 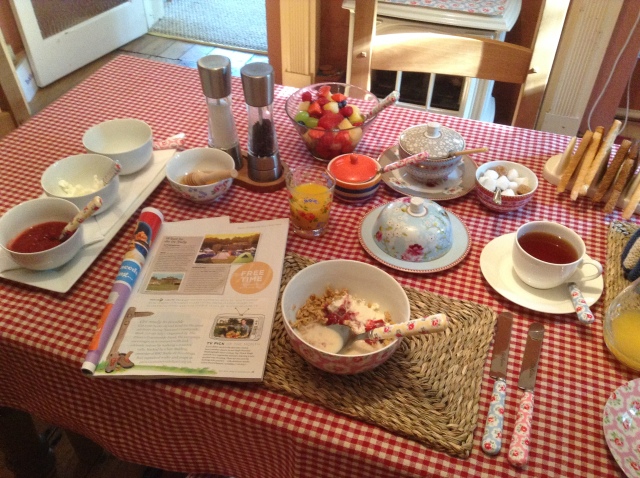 It was a day of colour, really, which began with a lovely breakfast : a combination of fruits and Cath Kidston tableware, moved on to meeting a friend at the Galleries Cafe at Freshford with its colourful herb garden and culminated with the exhibition and gardens at The American Museum. 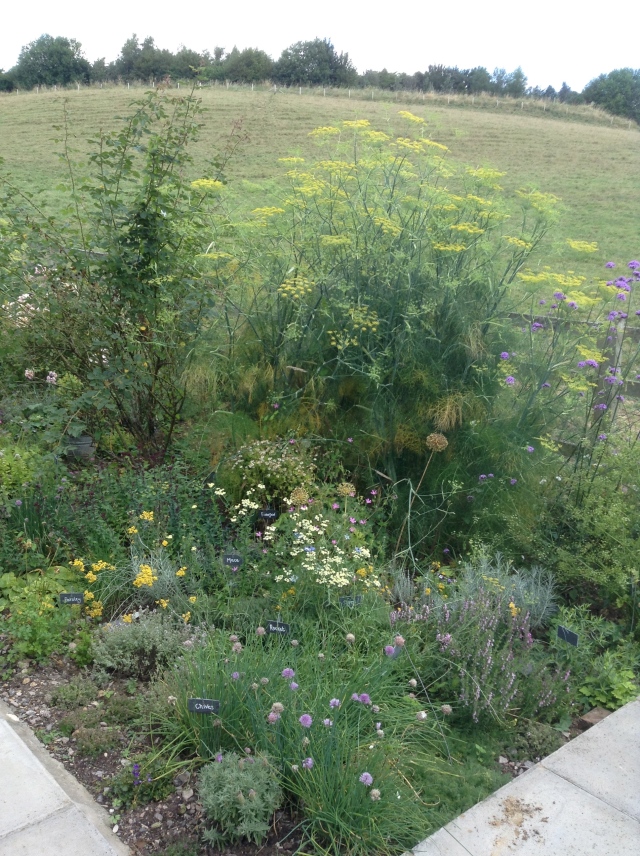 Herbs at The Galleries – A Magnet for Butterflies

The American Museum at Bath 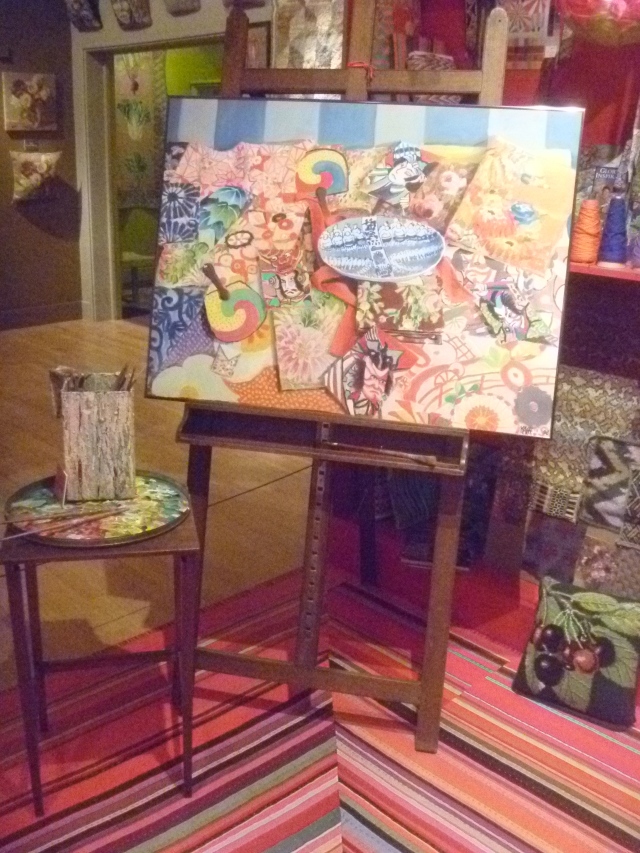 A Reminder that Kaffe was initially an artist 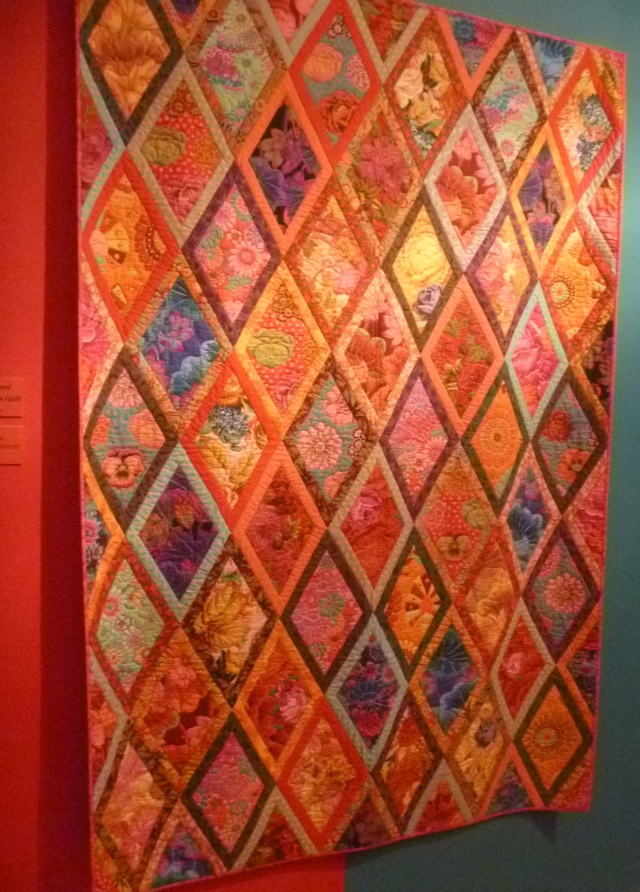 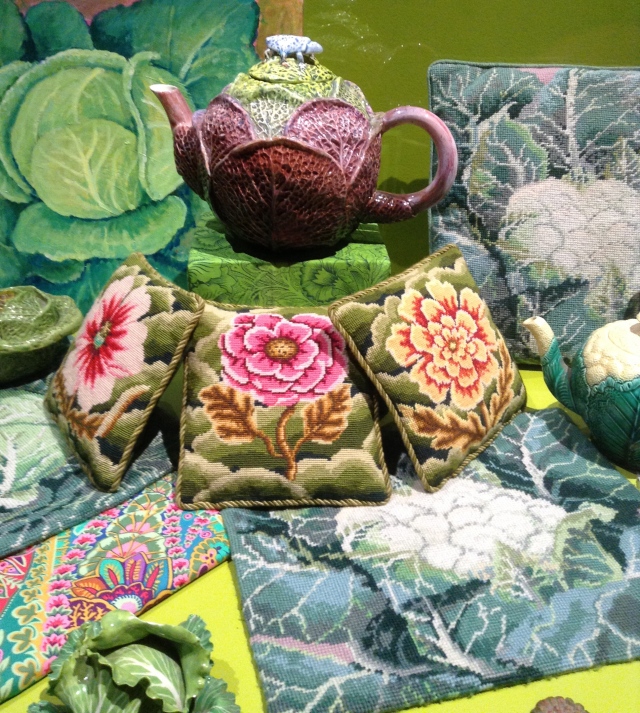 6 comments on “When in Doubt Add Twenty More Colours! Kaffe Fassett at The American Museum in Bath”