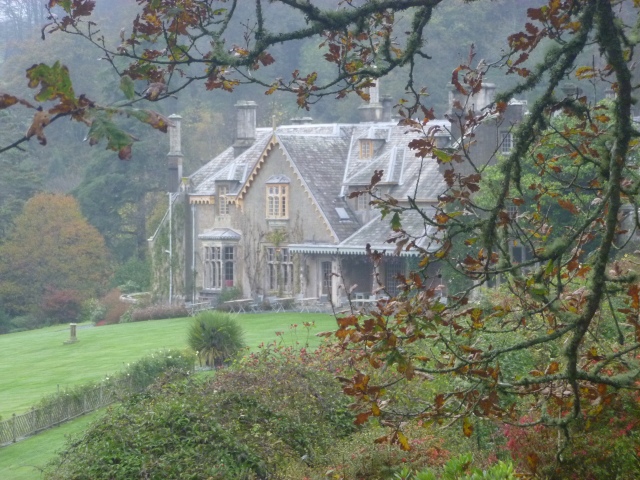 Today the original Endsleigh Cottage is a 16 bedroom luxury hotel.

“We saw yesterday one of the loveliest places possible – Endsleigh – the Duke of Bedford’s, about twenty miles from here”. Thus wrote Queen Victoria in her diary on 14 August 1856.

The result of the work of Humphry Repton and Jeffry Wyattville this truly beautiful estate on Devon’s border with Cornwall is still lovely today. It’s a private and secluded place which has been remarkably well-documented in the estate accounts still kept at Woburn Abbey home the Dukes of Bedford the original developers of Endsleigh.

The  Picturesque taste was popular in England between 1790 and 1840 and Endsleigh is one of its prime examples.

Repton first visited Endsleigh in 1809 and he encouraged the development of a more ‘natural landscape’ than the formality of Capability Brown. Repton proposed the buildings and Wyattville designed them. The main ‘cottage’ dates from 1810 and the subsidiary buildings 1812-1816.  Endsleigh was his first large scale work which was a collaboration with Georgina second wife of the 6th Duke of Bedford.

Whilst at Endsleigh I read her fascinating story in the book “Mistress of the Arts: The Passionate Life of Georgina, Duchess of Bedford” by Rachel Trethewey (Headline Review, 2003). 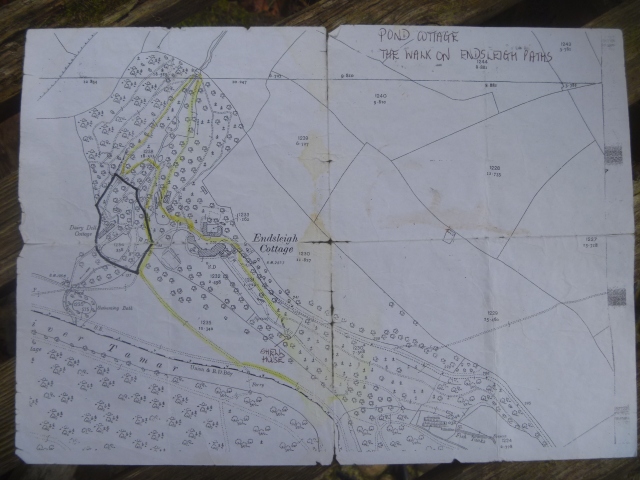 Within limits as a guest I could walk within the estate, down to the Tamar River and in the formal gardens close to the house. I also took tea one afternoon and enjoyed inspecting the various manmade features of the landscape which include a Swiss Chalet, a Shell Grotto and a Dairy. More about the Chalet and the Dairy in future posts. 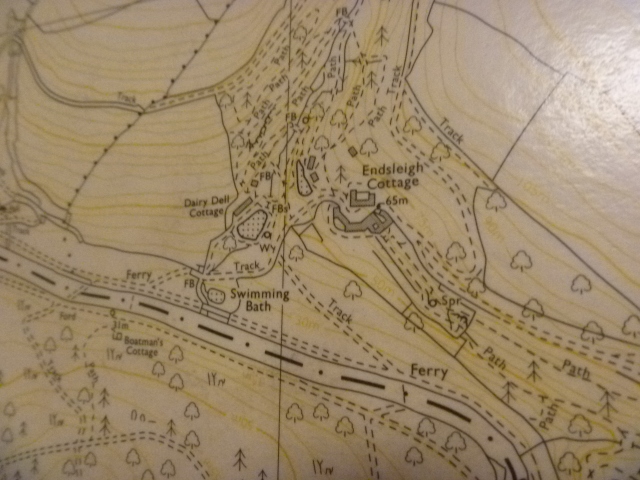 Stepping down the track from the house to the river a stream and muddy path made it impossible to go beyond the former swimming pool so I headed to the river bank and followed it downstream as far as possible. Eventually a notice on a gate prevents you going any further. 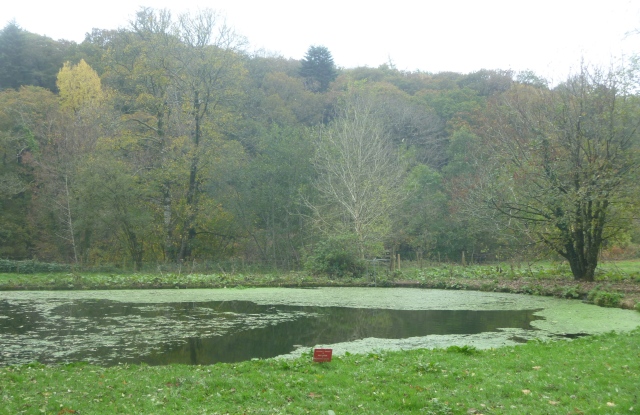 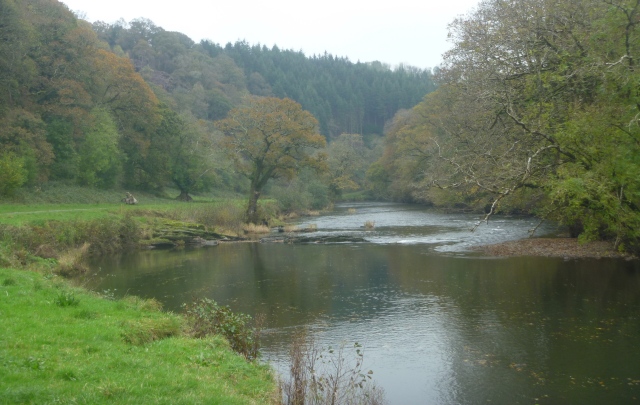 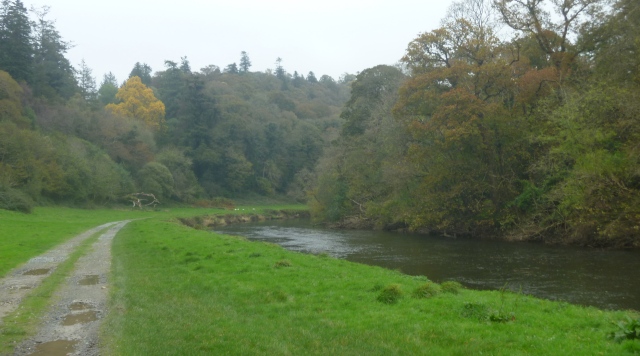 I returned along the path until I found a track leading up, up, up the valley side to a footpath which I hoped might lead to the Swiss Cottage. It didn’t; but I did find the memorial stone commemorating the spot where the 12th Duke was found dead in 1953. 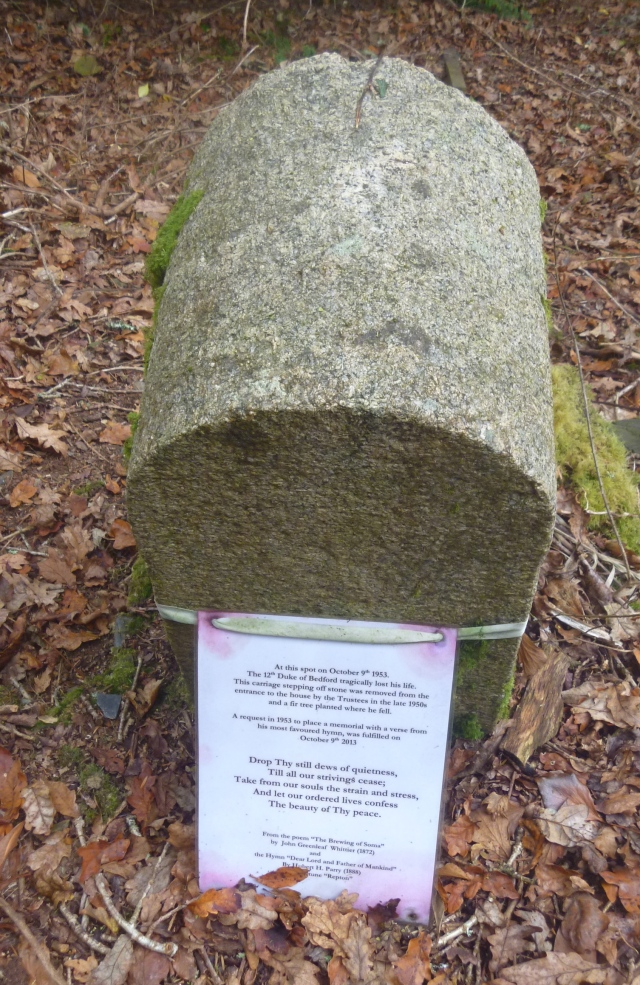 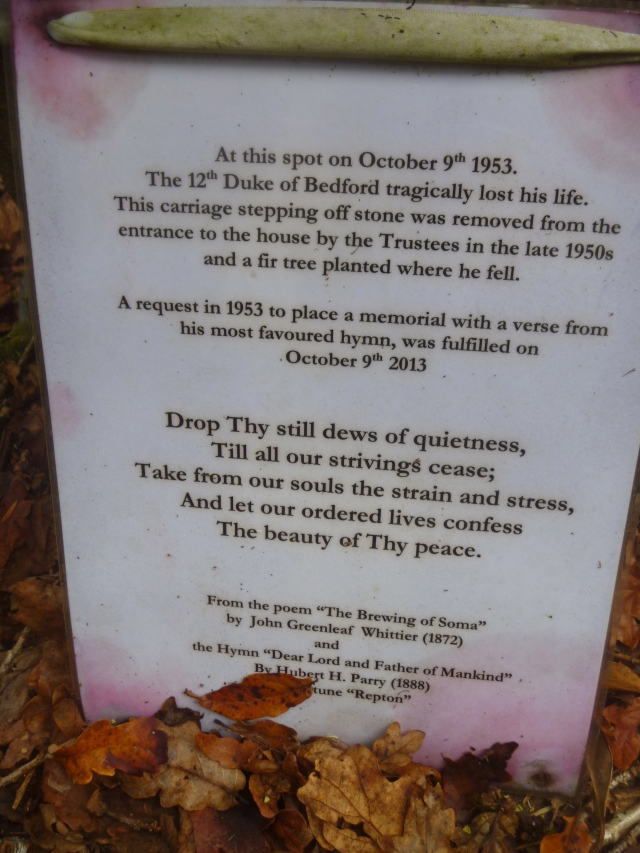 I’d read about this tragedy in another book “Endsleigh: the memoirs of a riverkeeper” by Horace Adams and edited by Clive Murphy [Braunton : Merlin Books, 1994]. I had the impression that Adams spoke or answered questions about his long life working first for various Dukes of Bedford and later for the Fshing Syndicate that took over the ‘cottage’ when the Bedfords needed to raise Death Duties. Murphy just transliterated Adams’s words to the page. 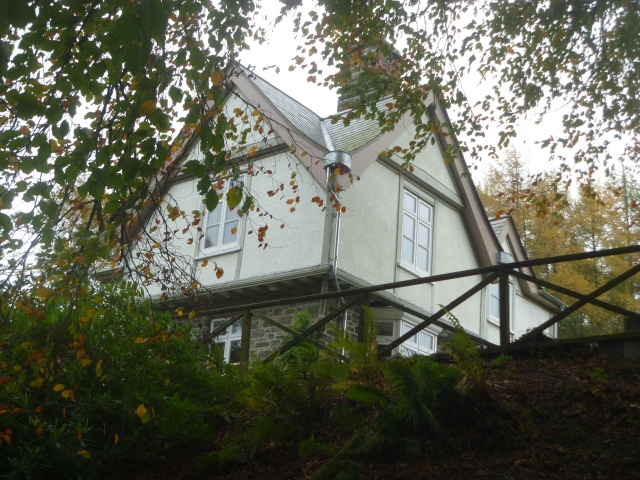 I didn’t manage to get more than a glimpse of the Swiss Cottage but nearby is Fishery Cottage at one time the estate home of Horace Adams. It’s now up for sale. Horace would be staggered – by the price and by the elegance!

From the main drive it’s possible to go into the formal gardens that surround the Hotel. They are now still beautifully maintained by about half a dozen full- and part-time staff. I didn’t make a note of the numbers of gardeners during the Bedfords’ tenure but there were probably around 5o. 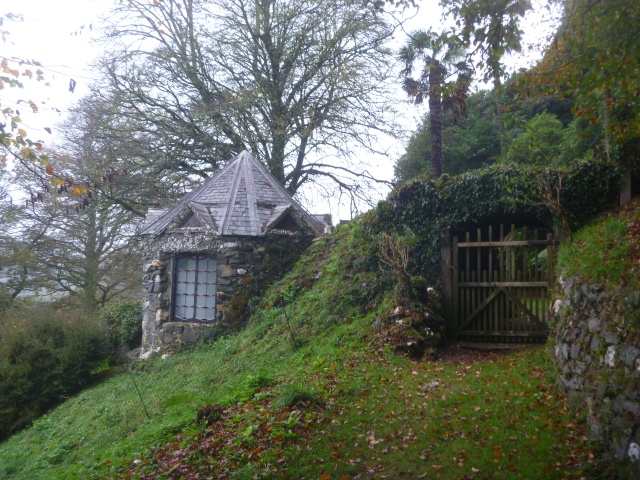 A rough path leads to The Shell Grotto set on a cliff high above the river. 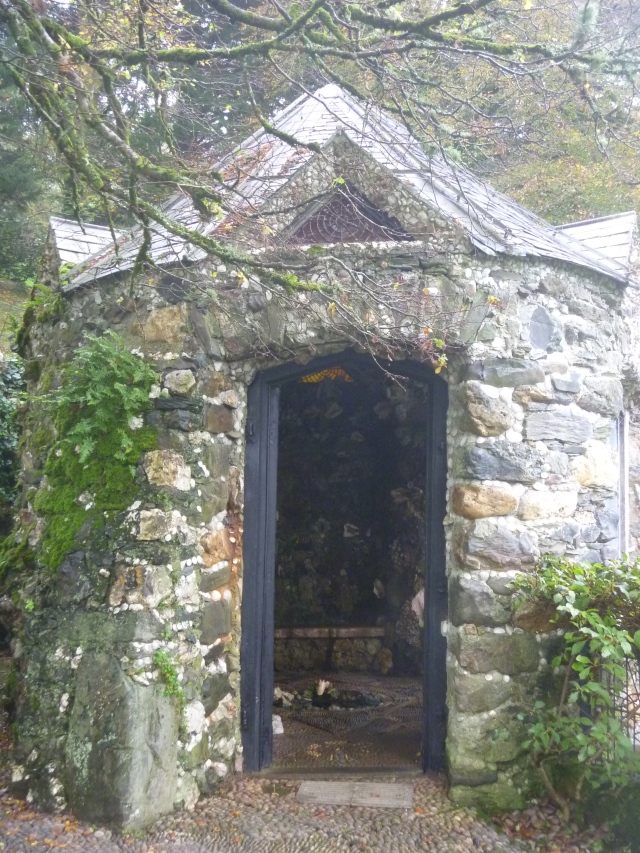 View of Endsleigh from Shell Grotto

“With the rise of the Romantic Movement in the 18th century and the return of the great explorers, building grottoes became increasingly fashionable … Some took the form of artificial underground caves;  others were built above ground in some picturesque spot deep in the woods or overlooking a beautiful view. The chief ingredients remained the same. They must be dark, have water, preferably a cascade or spring and be decorated with shells and minerals. … The grotto at Endsleigh is a rather late example … It is believed that the original intention was for it to be decorated with shells and minerals from Devon and Cornwall. … Obviously this scheme was not carried out as the grotto is full of tropical shells and corals. … It has been lately carefully restored and other shells and minerals have filled the gaps where the originals had crumbled away.” Patricia, Viscountess Boyd, October 1984 [Adapted from the description in the grotto] 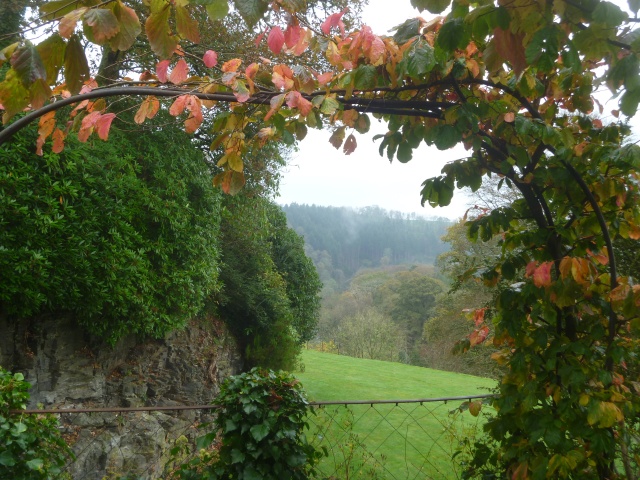 Tamar Valley from the Grotto

From the Grotto and formal gardens I returned to the main drive and behind the house are the former stables. 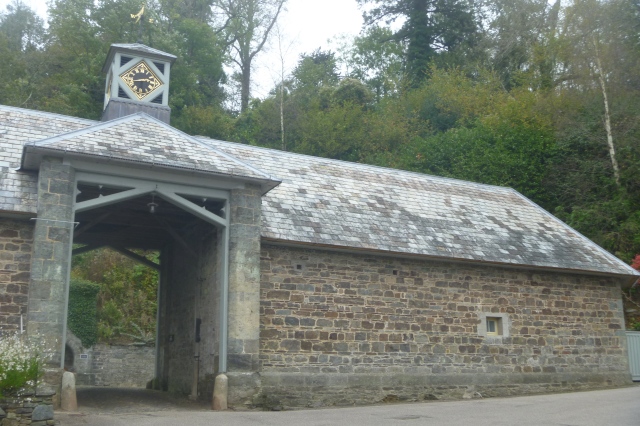 There’s a plaque in the stables commemorating the laying of the foundation stone by her four eldest sons. 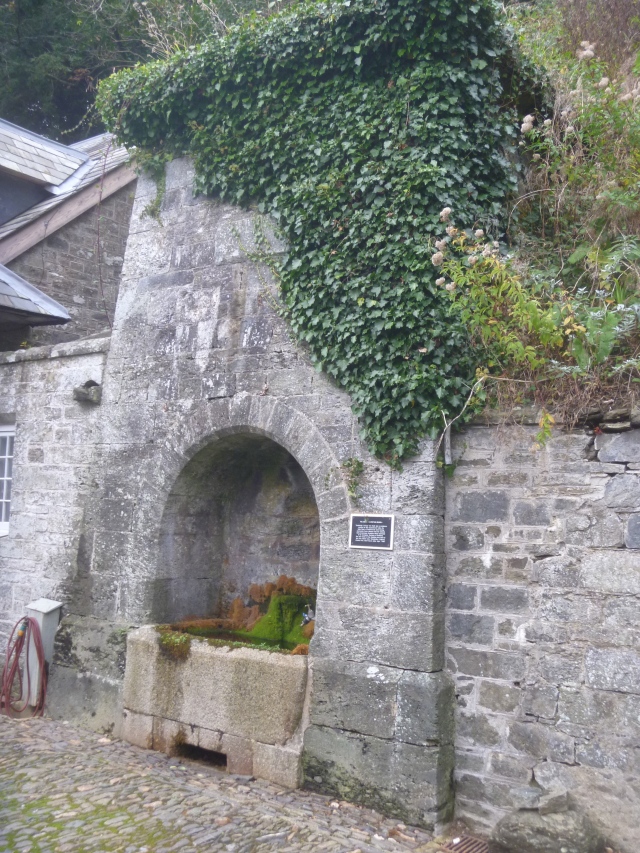 The Foundation Stone above the arch is nearly covered with ivy 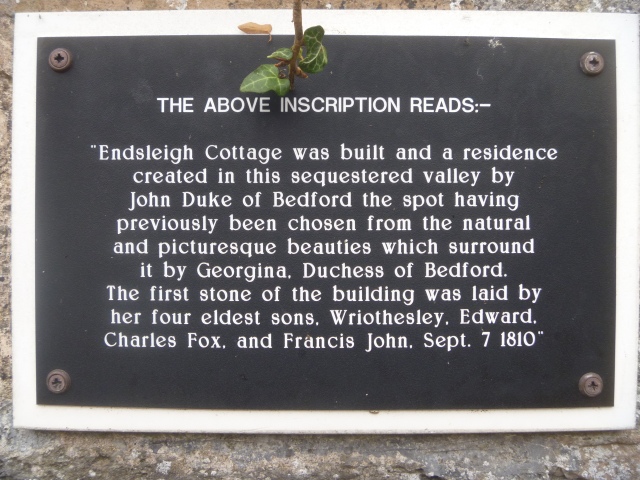 There is an arboretum with little bridges crossing streams and which contains unusual trees from around the world. But after further garden exploration in the damp weather and on slippery footpaths with the light beginning to fade even in the early October afternoon it was a relief to take tea in the library at Endsleigh Hotel. 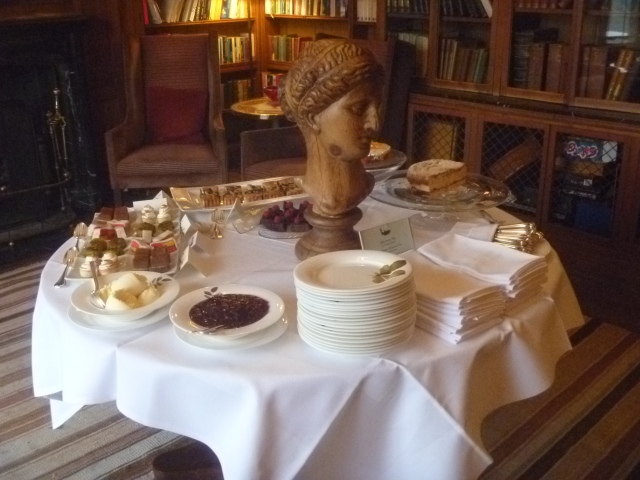 8 comments on ““One of the Loveliest Places Possible – Endsleigh” : an introduction”