What surprised us most and became ‘themes’ as we walked around on our recent visit to Colchester was the recycling of Roman bricks and (I’ve mentioned this before) the number of superlatives applied to buildings and monuments throughout the town. 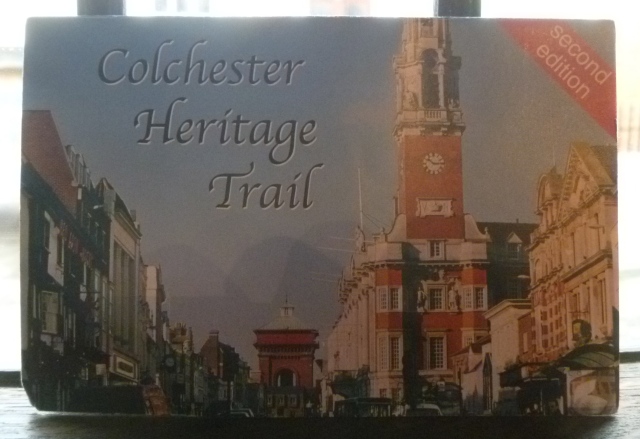 Colchester Heritage Trail is an excellent guide to the historic centre of Colchester. We didn’t follow the Trail step by step but fitted it all in over the several days we were there. The Trail starts and finishes at the Castle/War Memorial and only includes the old centre of town. Much of the following text is taken or adapted from the Trail leaflet. Some places were difficult to photograph and one day it poured with rain but otherwise I was able to snap most buildings, plaques and monuments. 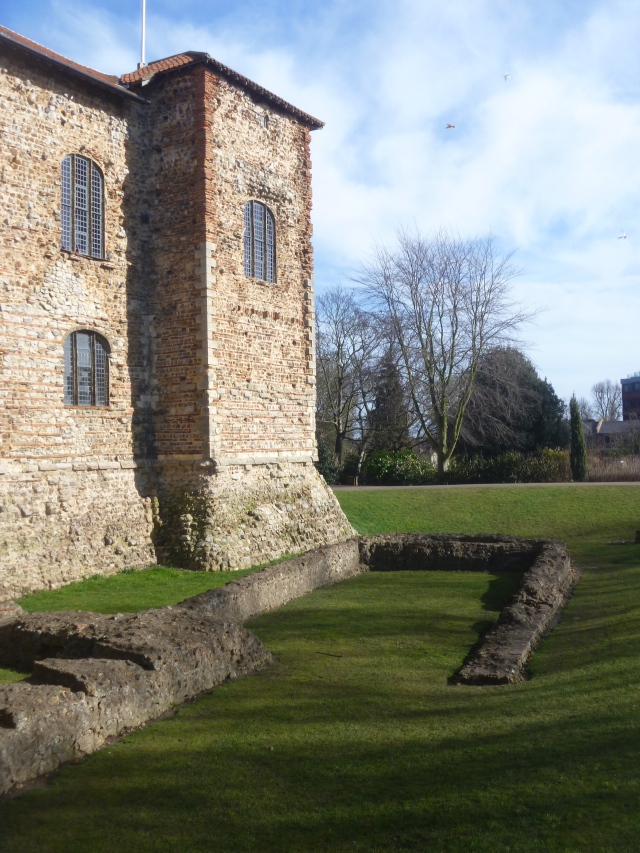 Colchester Castle itself was constructed mainly of brick and stone recycled from the old Roman town. It was built in 1076 over the foundations of the Temple of Claudius which itself was erected after his death in AD 54. John Weeley bought the redundant Castle in 1683 and removed parts of the upper floors to reclaim the building material so the original height of the fortress is unknown. 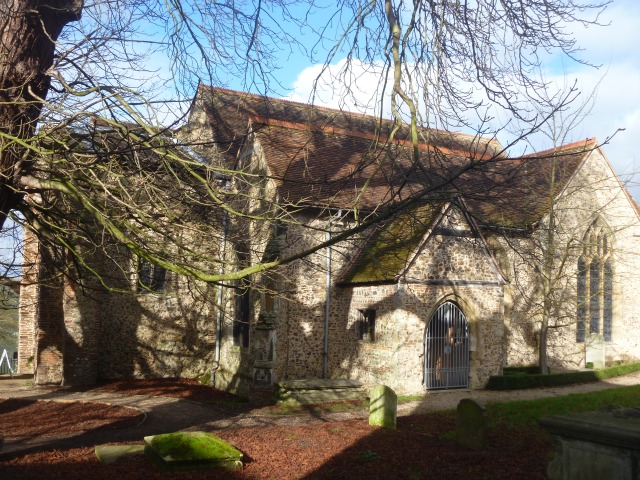 St Martin’s Church is cared for the Churches Conservation Trust which protects historic churches. We were very pleased to find the church open last Wednesday.

The tower is Norman although the rest of the church is medieval. The tower also stands no higher than the nave as a result of damage caused by cannon fire during the Siege of Colchester (1648). Colchester was besieged by the Parliamentary army for 11 weeks. The townspeople starved and many buildings were badly damaged. The Siege also crops several times along the Trail. 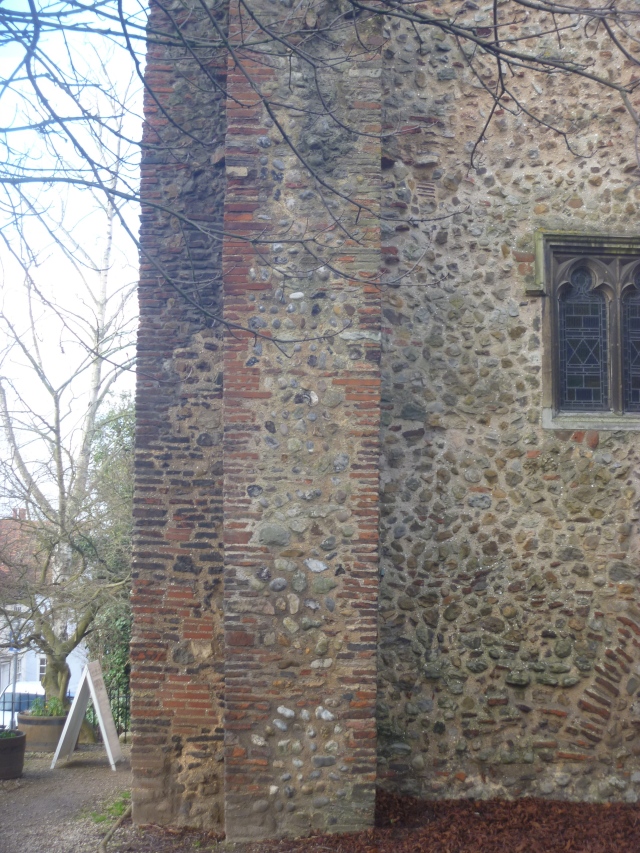 “Note the recycled Roman bricks in the tower structure.”

Sir Giles Gilbert Scott was responsible for uncovering the fine wagon roof in the chancel in the late nineteenth century. 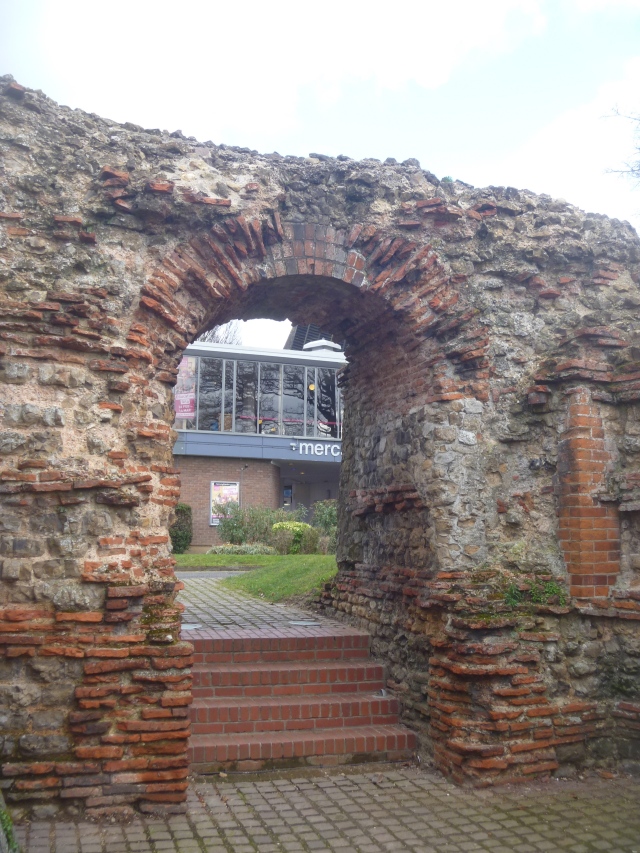 The Balkerne Gateway is the oldest surviving Roman gateway in Britain. It was the main entrance to the town. The best preserved section of the Roman wall extends from the gateway remains. The wall is 2.5m thick and stands near to its former height. It was built almost entirely from fragments of Roman brick and septaria stone but only on the inner and outer surfaces. The core of the wall is filled with rubble and hardcore.

St Mary’s at The Walls

St Mary’s was one of many buildings damaged during the Siege. Both the church and graveyard were used as a fort by the Royalist defenders who managed to raise a small cannon to the top of the tower. It was targeted by the Parliamentarians and this caused severe damage to the building and the demise of the canon and its marksman. The church was rebuilt in the early 18th century but the chancel and nave are Victorian. 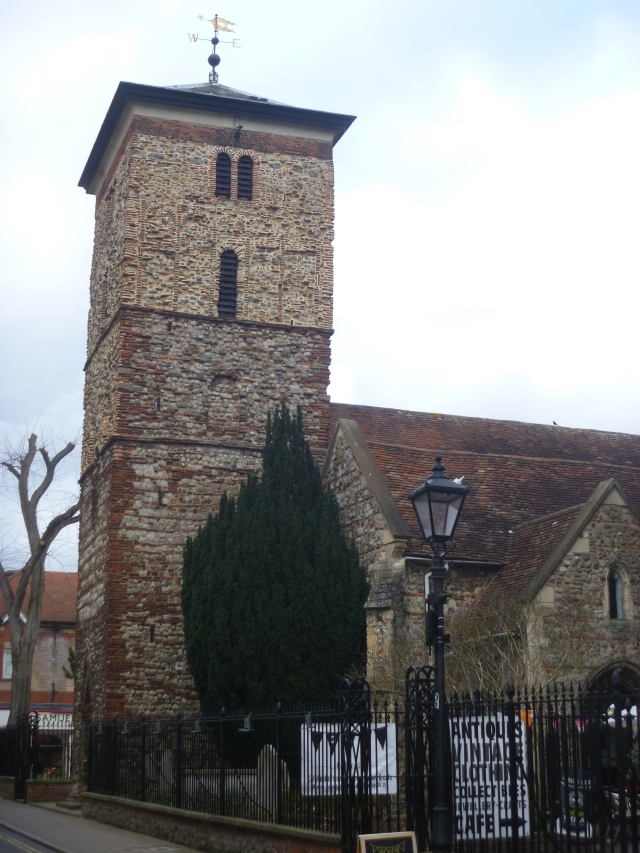 Holy Trinity is the town’s only Saxon monument. It dates from 1000 AD and incorporates an arrow-head doorway composed entirely of re-used Roman bricks. 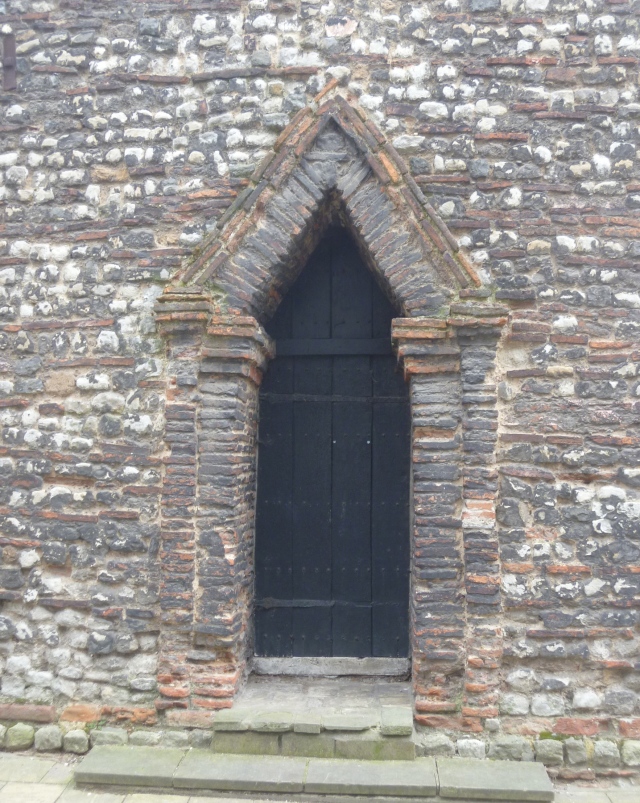 St Botolph’s Priory was founded around 1100 and was the first house of Augustinian Canons in England. All that remains today, however, is part of the original western front, with its superbly carved Norman archway, and a section of the nave. 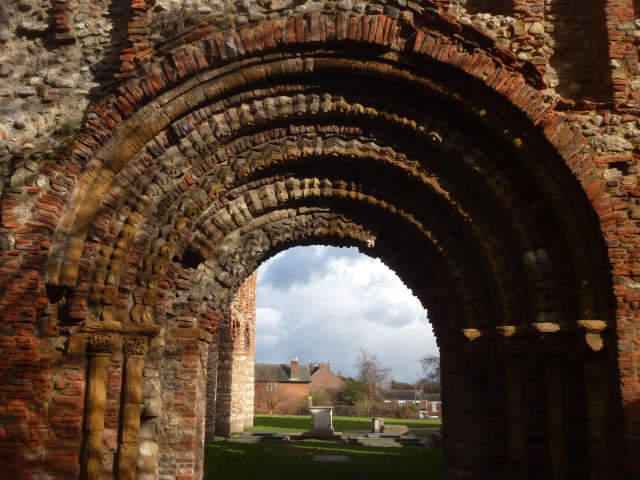 Note the liberal use of Roman brick in the Priory construction

There’s lots more to Colchester than re-used Roman bricks – nursery rhymes, a water tower, a theatre and lovely black and white Tudor buildings plus another trail. All coming up in the next post.