There is, of course, more to Colchester than just recycled Roman bricks. Peake’s House is in the Dutch Quarter which was named after the Flemish weavers who settled here during the 16th century. 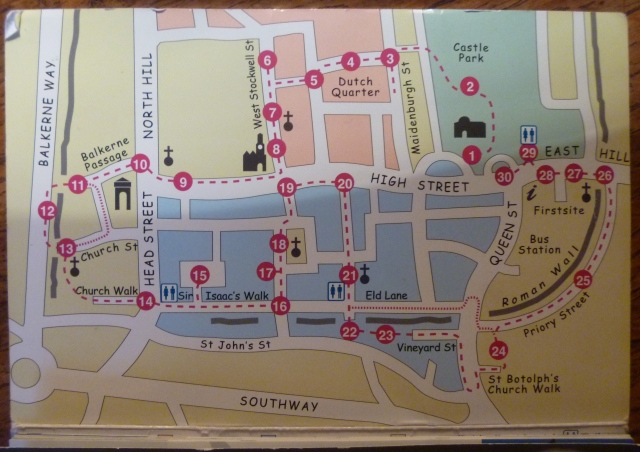 St Helen’s (just a few steps from East Stockwell Street) was first recorded in 1097 but its history goes back to the 3rd century AD. It was founded by Empress Helena (St Helena is Colchester’s patron saint). She was the daughter of King Coel (of Old King Cole nursery rhyme fame) and mother of Emperor Constantine the Great who was born in Colchester.

Since 2000 AD the chapel has been a Greek Orthodox parish church of the Patriarchate of Antioch. Inside the tiny church the walls are hung with icons to the various saints including Saint Helena and Saint Barbara.

Next to the chapel on one side is a former Quaker burial ground and on the other a line of black bricks leads slightly uphill to a window through which you can see some of the remains of a vast Roman theatre that had been capable of seating 3,500 people. A mural on the wall shows an artist’s impression of the theatre when it was in use. 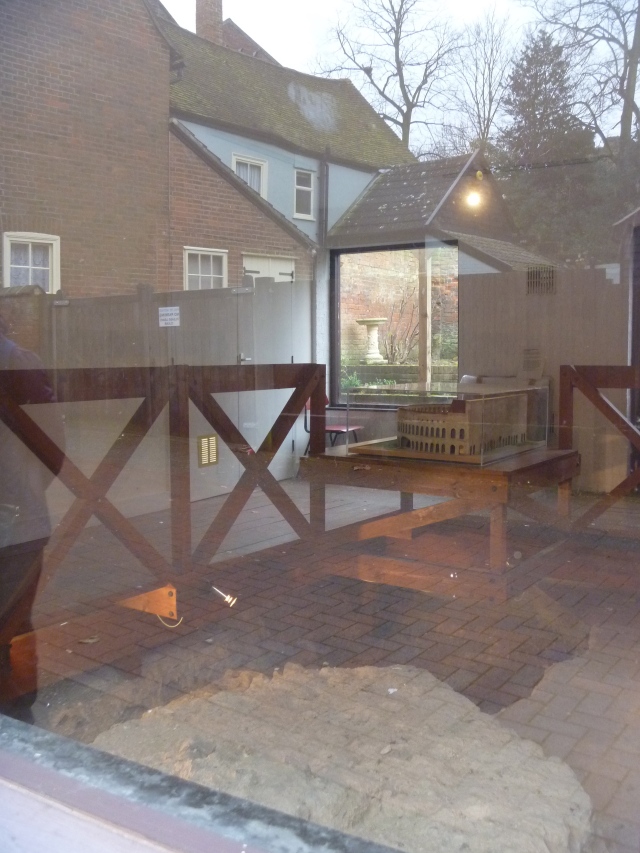 The Roman Theatre Foundations – a Reflections of the Street 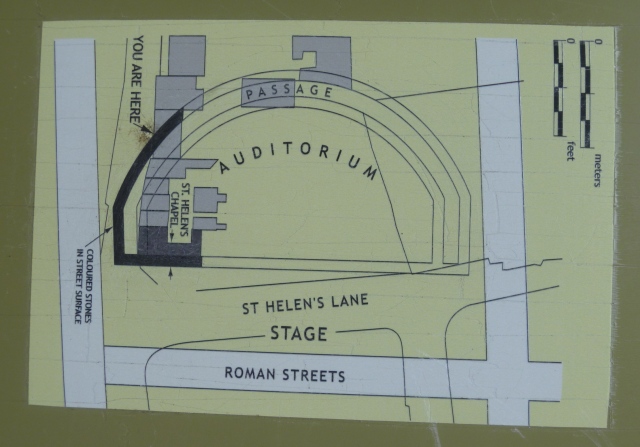 Plan of the Roman Theatre superimposed onto a modern street map

Nearby, on West Stockwell Street, is the former home of Jane and Ann Taylor who were famous for writing verse. Jane Taylor wrote the nursery rhyme ‘Twinkle, twinkle little star’ in 1806. 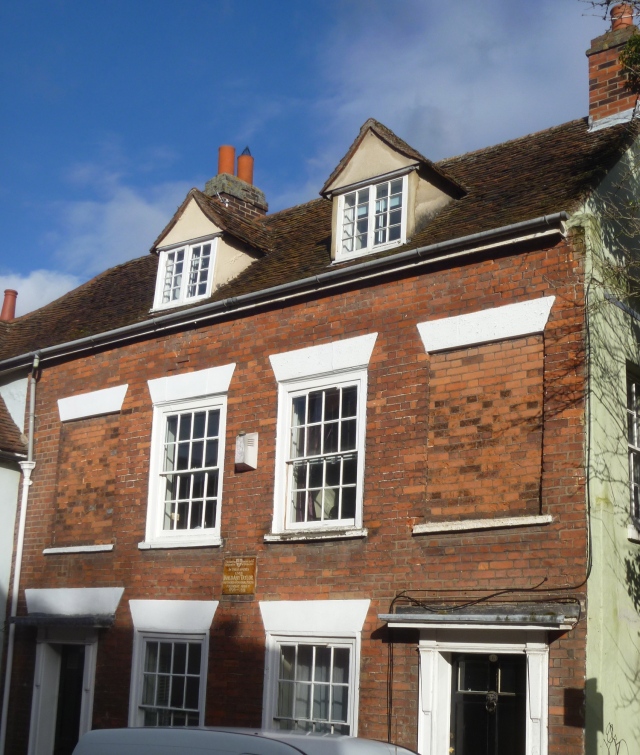 Home of Jane and Ann Taylor

We read about the Taylors in Colchester Museum

Colchester Town Hall on the High Street has an impressive tower designed by John Belcher and opened in 1902. It rises 50m above the street and is surmounted by a statue of St Helena and other historical figures connected with Colchester including Queen Boudicea of the Iceni. She led a rebellion against the Romans in 60 AD.

We sought out Tymperleys the former home of Dr William Gilberd a scientist and physician to Queen Elizabeth I. It’s now a tea room and until very recently had housed a large collection of Colchester-made clocks. Bernard Mason who had collected the clocks and lived at Tymperleys left the entire collection and the house to the borough. Now only a very small selection may be seen in the Colchester Museum. 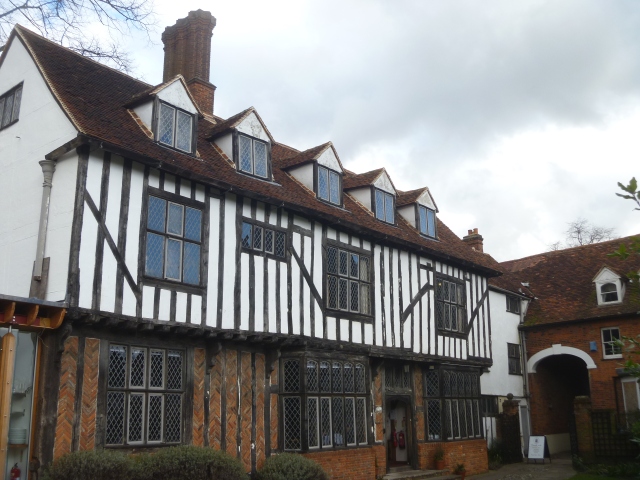 You can’t miss Jumbo! It’s a huge brick water tower built in 1882 and named for a famous elephant at London Zoo. The Rev John Irvine who lived in his rectory on the site of the present Mercury Theatre was not happy about the giant structure erected at the bottom of his garden and described the monstrosity as a Jumbo. The name stuck and the builders added a brass elephant to the weathervane as a reminder to the unhappy clergyman.

Jumbo and the Mercury Theatre seen through Balkerne Gate

In addition to the Heritage Trail we also followed the Town to Sea Trail : Colchester and its historic port, the Hythe. “A unique art trail, designed for walkers and cyclists, follows the tidal River Colne through some lesser known areas of Colchester”.  We followed the whole of the 2 mile trail from its start at firstsite, an arts centre near the castle, to the end at the Hythe, a mixture of deserted or renovated quayside warehouses and modern out of town flats and shopping centre. We had a coffee in B&Q at Colne Causeway. 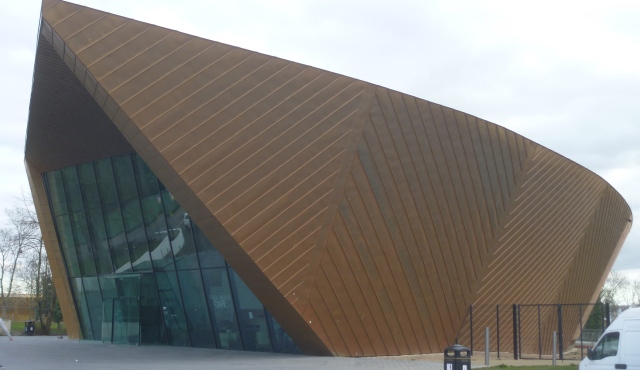 Information Board : Colchester Oysters are the best!

The River Colne in its Heyday

The highlight of the walk, but on a slight detour, was the Church of St Leonard at the Hythe; preserved by the Churches Conservation Trust its opening hours are limited but we were lucky again. 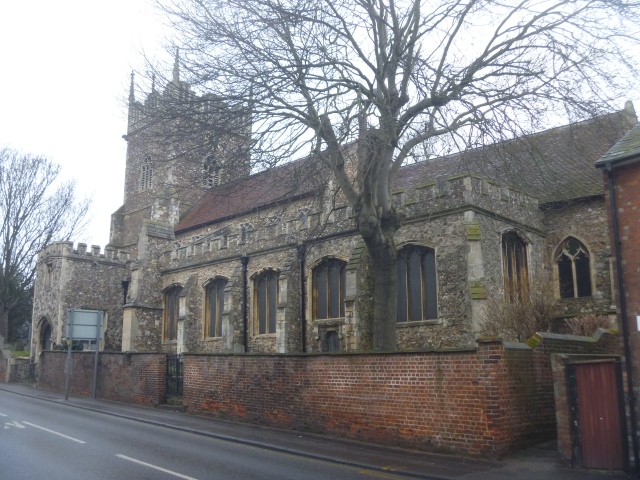 The Medieval door of this old port church still bears the holes made by troops to put muskets through during the English Civil War.

“Perhaps it is little known that Twinkle, Twinkle Little Star actually consists of 5 verses, with the fifth verse rarely sung. Here’s the complete 5 verses, taken from the Oxford Dictionary of Nursery Rhymes (2nd edition, 1997), with the repetition of the first two lines added to fit the melody.” [source]

2 comments on “A Further Selection of Colchester Landmarks”