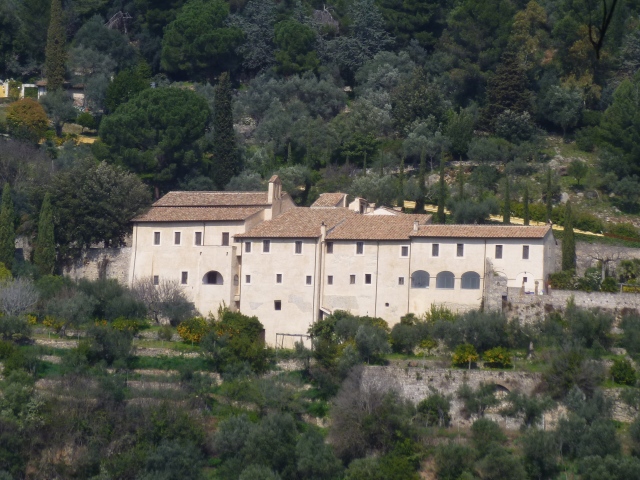 In the summer of 2013 I had the great good luck to be offered a room and to stay with fellow Landmarkers in the Italian countryside near Tivoli, about 20 miles northeast of Rome. I leapt at the chance and finally last week the trip became a reality. I have just spent a fabulous week at Sant’ Antonio and made a few excursions too when I could manage to drag myself away from this wonderful old house.

According to the History Album Sant’ Antonio was built around 100 BC.  The upper parts were rebuilt in the late 16th and early 17th centuries: the monastery between 1583 and 1590; the east wing about 1625 and the church in 1647. It was acquired for preservation by Frederick Searle in 1879. The present owner, Vicomte Roger de Brisis, is his descendant but Sant’ Antonio has been managed by The Landmark Trust since 1995. It consists of a medieval monastery grafted onto a Roman villa of the time of Caesar Augustus, or maybe even before. It was rescued from abandon in 1879 by an Englishman newly returned from West Indies. 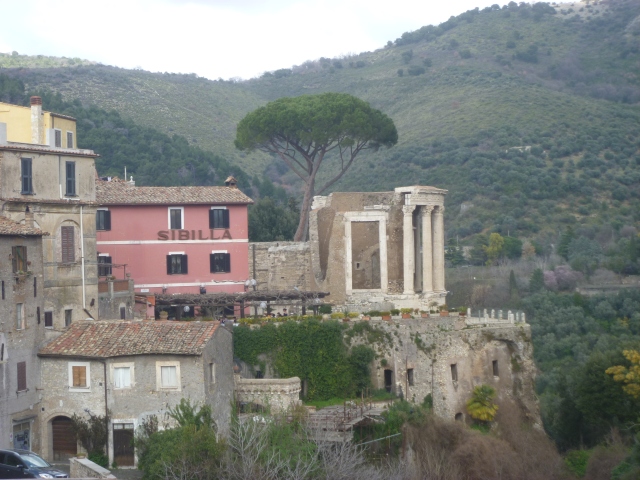 A well-founded belief is that a frequent guest, if not an early owner, was the poet Horace. Across the ravine thunders the water of Anio, with temples of Vesta and the Sibyl poised above it. All these on the outskirts of Tivoli, the Roman Tibur, and you are approaching something very near the heart of the civilisation that has moulded Europe for two millennia.

It is fitting that the revival of this place should have fallen to an Englishman, because those two names – Horace and Tivoli have a particular resonance for his countrymen. From the Middle Ages , English boys learned their reading and writing by means of Horace’s Odes and Satires, along with the works of Virgil and other writers of the Augustan Age. Only in the late 20th century has academic education ceased to be built on these cornerstones.

In the 17th century Englishmen first began to visit Italy in large numbers and carried its influence home in the most direct manner, in their paintings, and their buildings and their gardens. The dramatic influence of Tivoli appealed strongly to painters, notably the great French creators of an ideal classical world: Claud Lorrain and Gaspard Dughet. The English imitators eg Richard Wilson, followed them here. Writers like Joseph Addison sought the places which the best paintings might be composed and the. Murmured to themselves of “Tivoli’s delightful shades and Anio rolling in cascades.”

In 1879 Frederick Searle was searching for a place to sketch the waterfall when he first saw Sant’ Antonio – “La casa di Orazio”. He made it his home; spent 20 years renovating and repairing it and encouraged scholars and archaeologists to share his discoveries. His daughter Georgina and her husband George Hallam and then her great-niece Lucy d’Aihaud de Brisis continued the tradition. In this generation Count Roger de Brisis took on the care of Sant’ Atonio and with Landmark’s help has made it possible for guests to stay here. Sant’ Antonio has long enjoyed the soubriquet ‘Horace’s Villa’ . There are several schools of thought relating to whether Horace lived here or not. It is known through the writings of Suetonius that Horace lived in Tibur (Tivoli).

The Sant’ Antonio History Album goes on to give various scholars’ opinions on the exact location of Horace’s Villa but I like to think that it was Sant’ Antonio and unless some future academic gives me proof to the contrary I will stick with this theory and the celebrity link with the house.

The Franciscan Friars took over the remains of a Roman villa – it had continued operating as a villa farm – with ample storage spaces, good water supply and fertile terraces. By becoming a monastery its survival was ensured for a further five centuries. Sant’ Antonio was a monastery complex of the lesser kind; common in the mountains of central Italy. The little church of this monastery is still an object of devotion for the many Catholics of the town. The feast day of St Anthony is 13 June.

Having read details of the architectural plans of the monastery it would appear that the arrangement of the rooms and their various uses has changed little over the centuries. We dined in the Refectory, cooked in the kitchen, slept in the monks’ cells (the numbers still painted on the doors) off long wide corridors decorated with church ornaments, crucifixes and reliquaries. Our sitting rooms – a range of three – occupy a northeast projecting wing. The main floors are of rectangular terracotta bricks laid in coursed and herringbone patterns with borders, a technique common to Italy. The small casement windows are a rare feature to have lasted so long in Italy, the details of the dark unpainted wood, the panes of glass and their fixings, and the modest catches all being precious survivals.

Welcome to Sant’ Antonio – come and have a look inside. 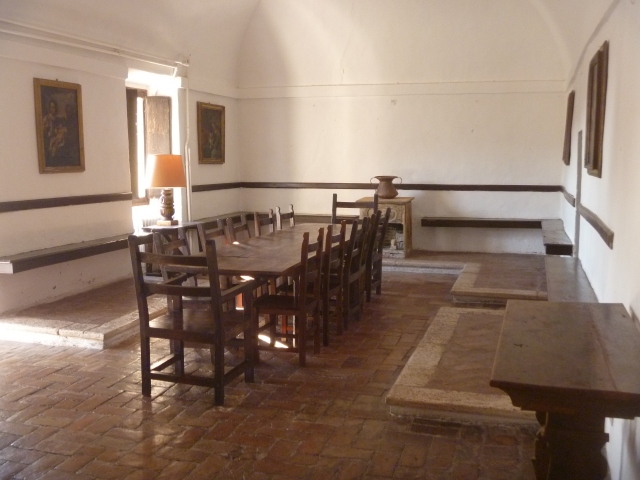 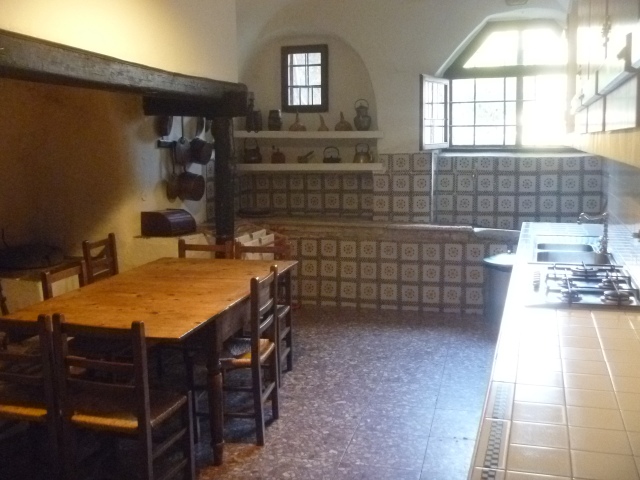 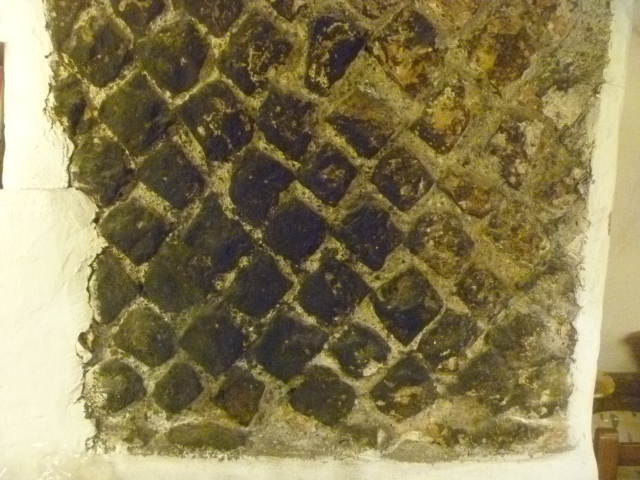 Roman Wall in the Kitchen 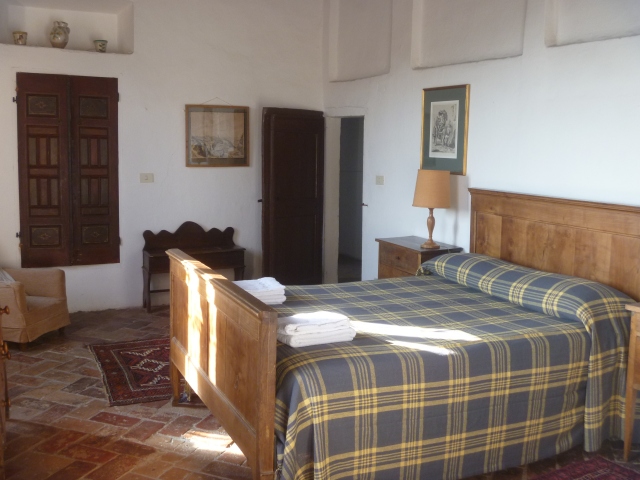 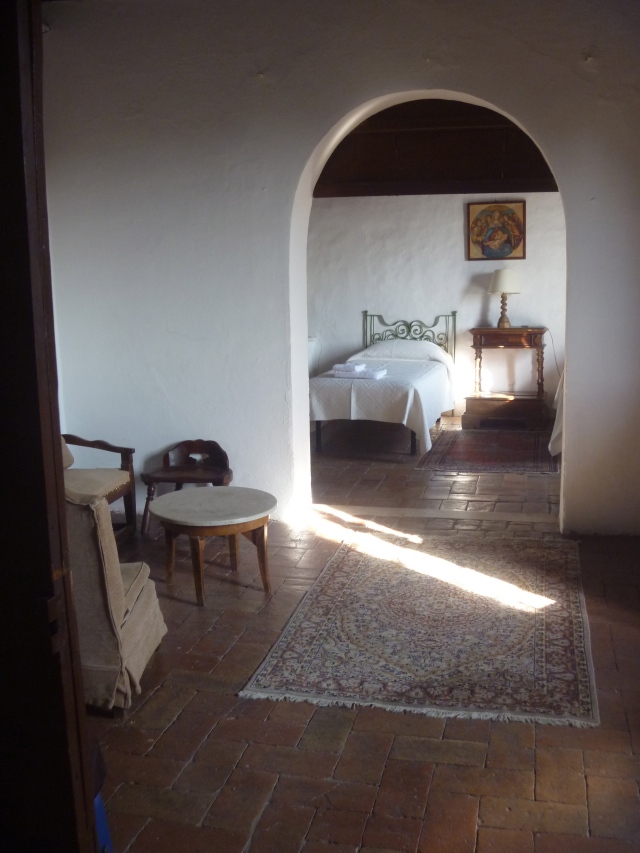 A Twin Room with Sitting Area 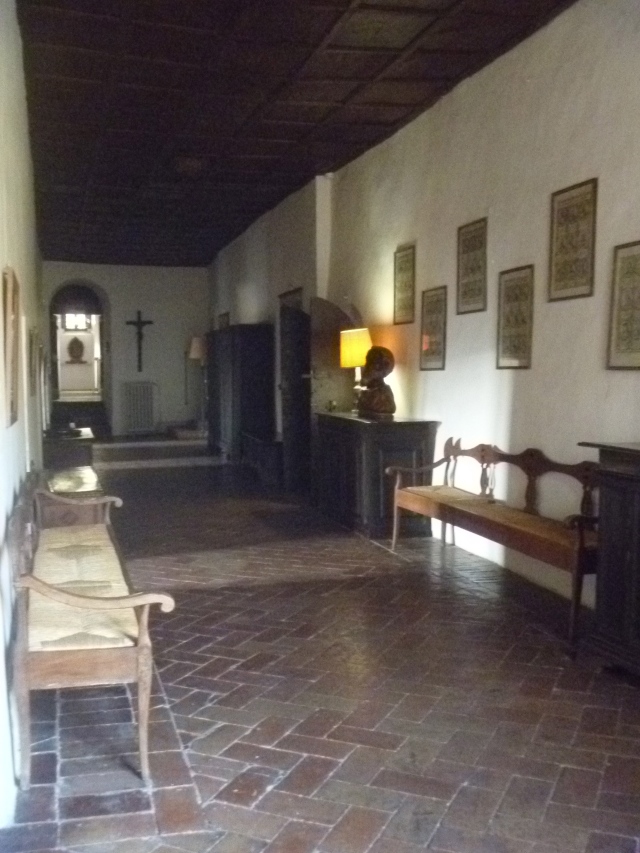 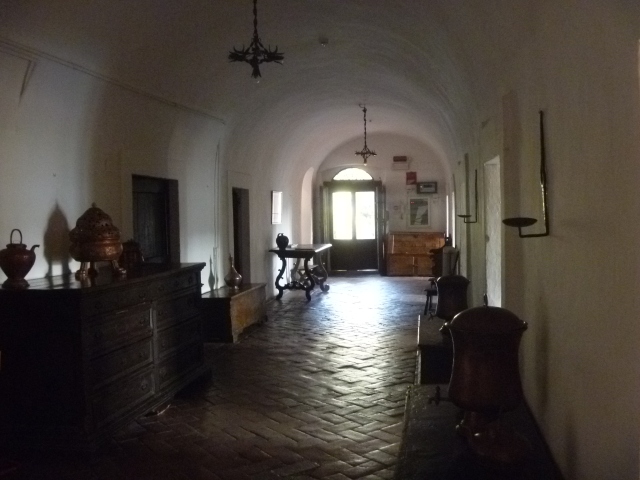 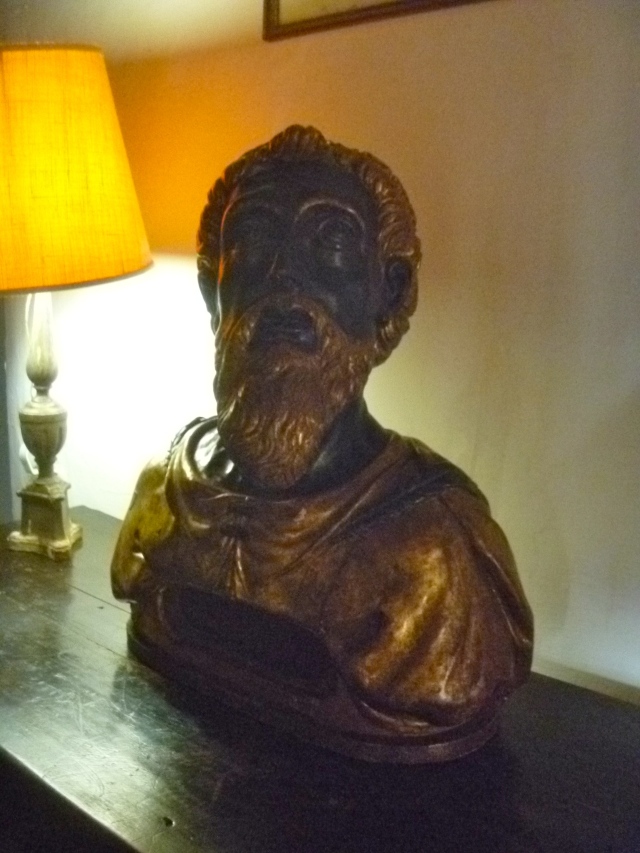 One of the Reliquaries 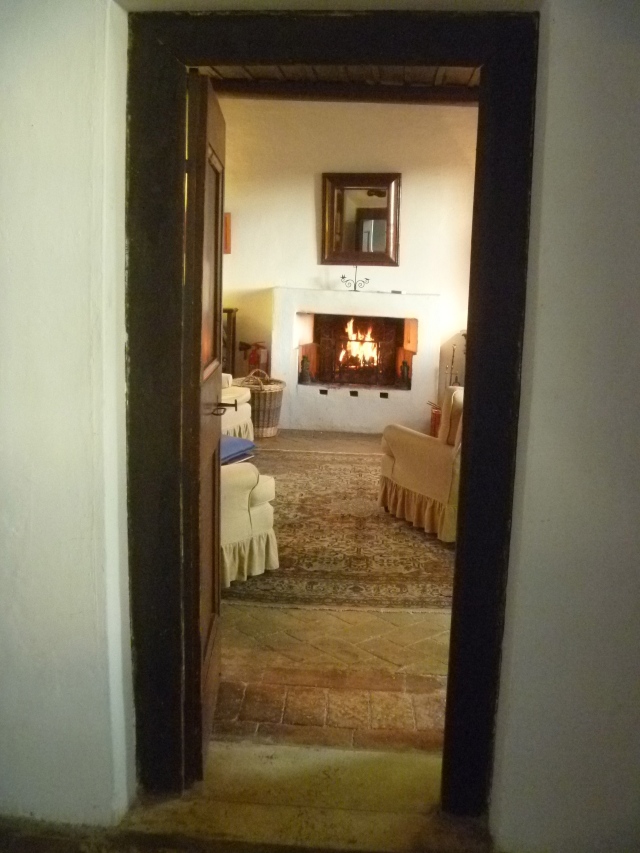 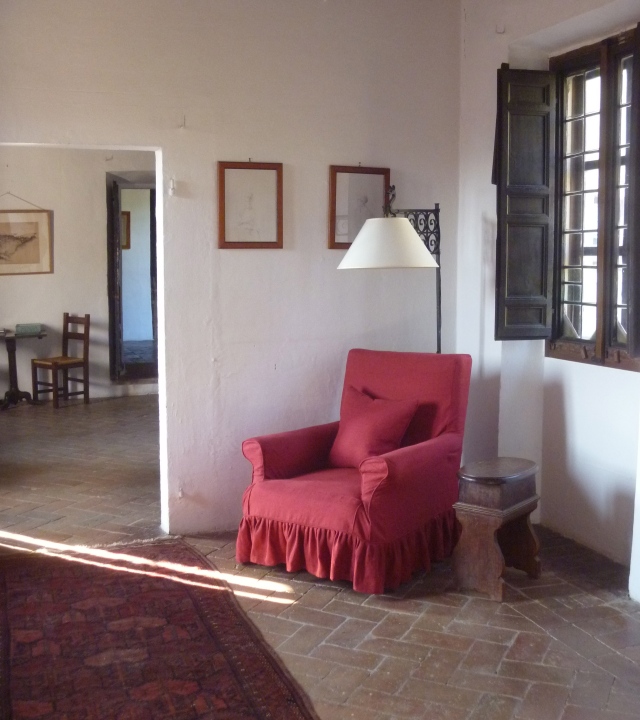 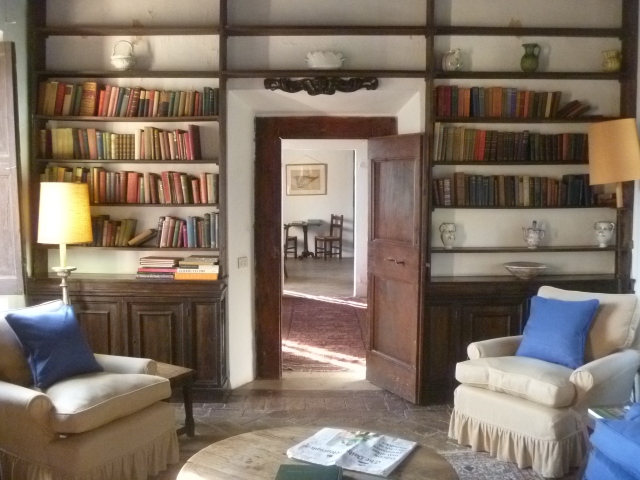 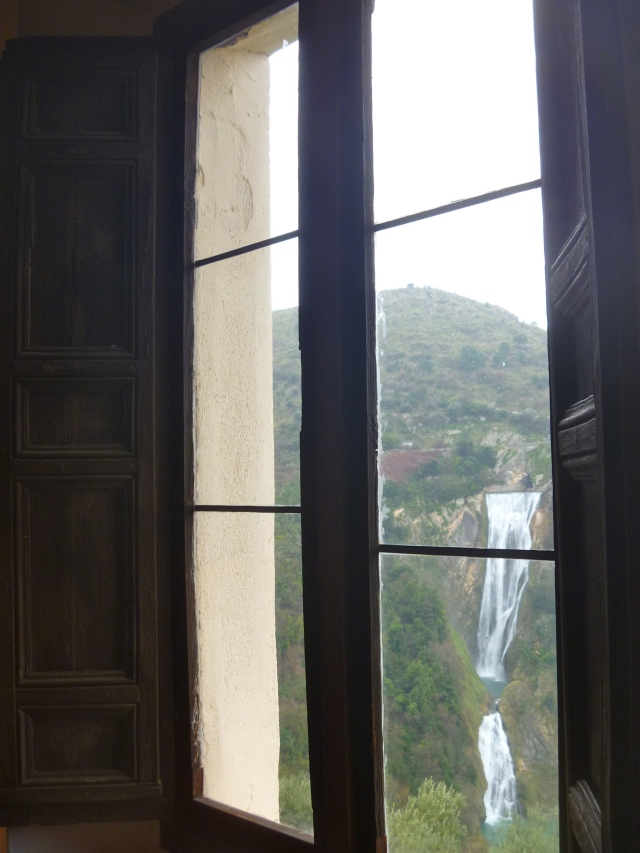 The “Anio Rolling In Cascades” seen through a Casement Window 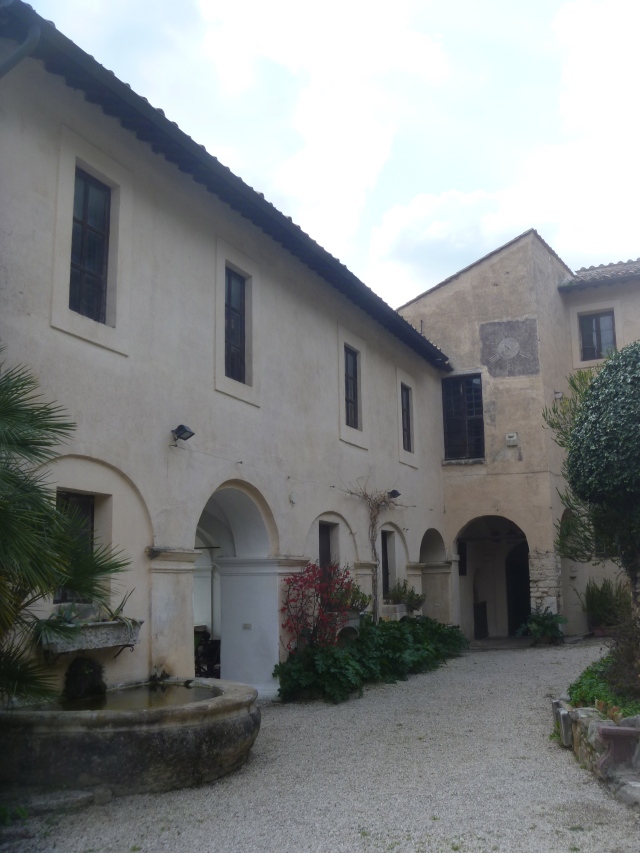 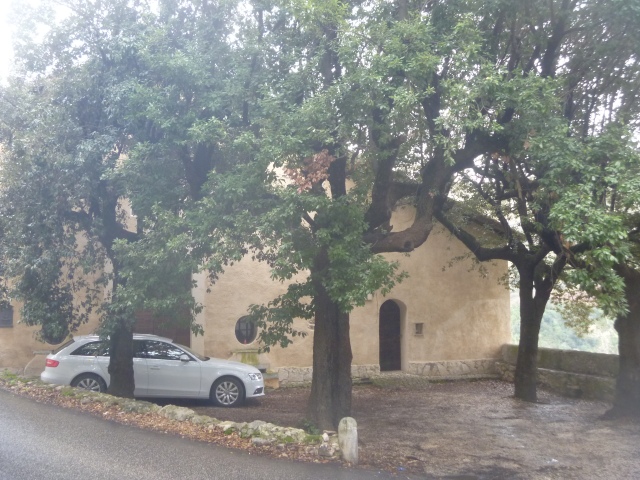