We’d planned to make one excursion from Colchester and that was to nearby Constable Country to Dedham in Essex and Flatford in Suffolk. On our first visit to the Tourist Information Office we picked up a lovely little brochure “A Visitor’s Guide to Constable Country in the Dedham Vale”. Across the centre fold is a sketch map of the area showing footpaths and locations where John Constable (1776-1837) painted scenes. 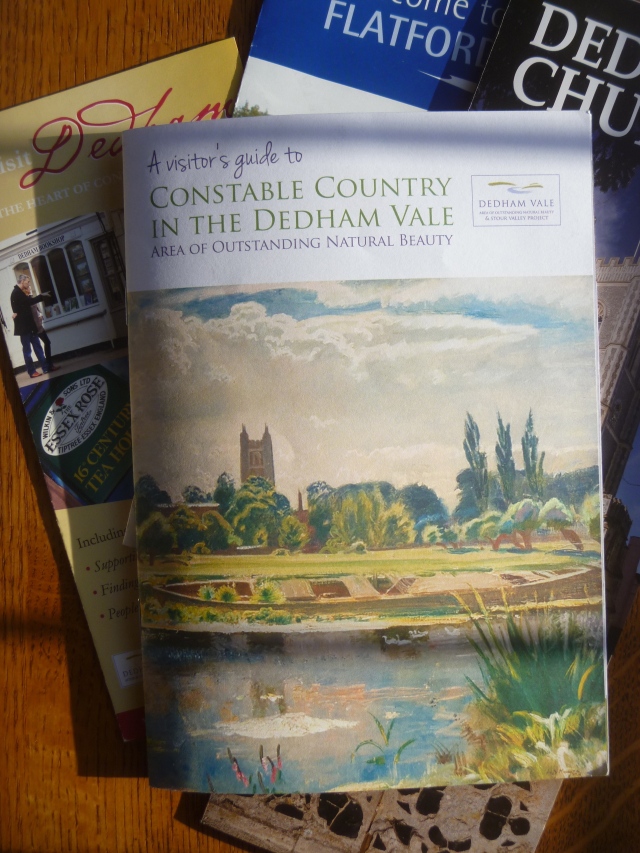 That evening we noticed this at the bottom of the page :

“Take the Train…
Did you know it only takes 40 minutes to walk from Manningtree Station to Flatford, and around
40 more from Flatford to Dedham? Avoid the traffic and enjoy a relaxing day out by train.”

The perfect way to go, we thought. The next day we travelled to Manningtree and the walk began well along a country lane until we reached the first actual footpath. Horror! It was a mud bath. We managed to manoeuvre ourselves along the overgrown edge but it soon became impossible. In addition, all the footpath signs after leaving the station were broken off. A sad state of affairs. In the end we took a raised path, still very muddy in places, alongside the River Stour to the A137. Luckily there’s a pavement along the road back to the railway station.

Our second attempt was more successful. We decided to take a short detour from our route up to Norwich.

First stop was the pretty, large village of Dedham, still in Essex. The main street is lined with Georgian buildings. We did a little shopping and had lunch in the Arts and Craft Centre which occupies a former historic church on the edge of the village.

Dedham Parish Church – Dedicated to St Mary the Virgin in 1492

The main parish church is well worth a visit. An excellent colour guide indicates the main points of interest. The modern pew ends are a particular feature of the church. They have distinctive carvings and inscriptions and dedications. They were made by Mabbitts of Colchester over more than a decade. 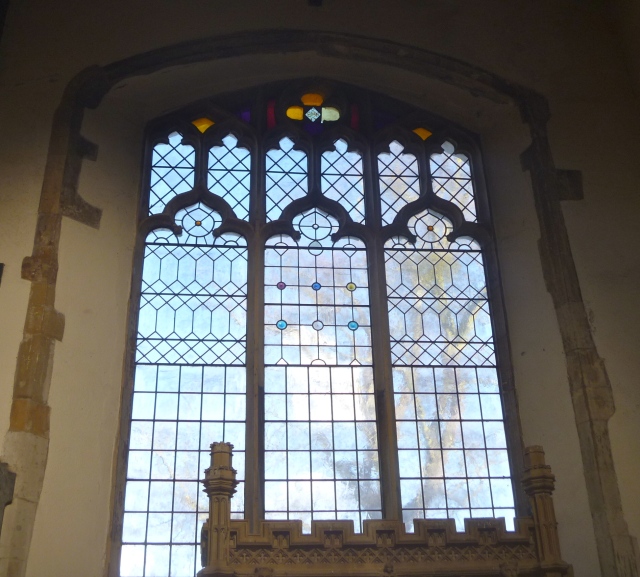 At the top of the window are fragments of 17th century glass.

“In the apex of the window above the Webbe Tomb are some fragments of old glass showing the initials E.S. commemorating Edmund Sherman who, at his death in December 1600, left his house opposite the church to the Governors of the Free Grammar School of Queen Elizabeth for a school to teach boys to ‘read, write and cast accounts’, that is to become local tradesmen rather than aspire to enter university or a profession.

Edmund Sherman, with his elder brother Henry and their father – also Henry, were named as Governors of the Grammar School when it was endowed in 1571 and were also nominated in the Charter granted by Queen Elizabeth four years later.

At least eleven descendants of old Henry and these two sons, Henry and Edmund are known to have emigrated to New England between 1633 and 1640. They and their descendants included a co-founder of Rhode Island; a signer of the Declaration of Independence and framer of the Constitution of the United States; the famous General W.T. Sherman of Civil War fame and his brother, Secretary to the US Treasury; a Vice-President of the USA 1908 to 1912; and two famous Admirals in the Second World War, one of whom later became Chief of Naval Operations for the USA.” [source]

The church displays a Constable painting “The Ascension” originally commissioned for Manningtree church and currently on loan from the Constable Trust.

The church tower is particularly fine and very high – over 40m: perhaps the largest medieval flint tower ever built. It appears in many of Constable’s paintings including his ‘Dedham Mill Lock’. It was completed in 1519 and is unusual because it has an archway underneath it. This is sometimes called a ‘Galilee’ to remind worshippers of how Christ led his disciples into Galilee after His resurrection. If it had been a summer weekend we’d have climbed the 132 steps to the recently completed viewing platform. 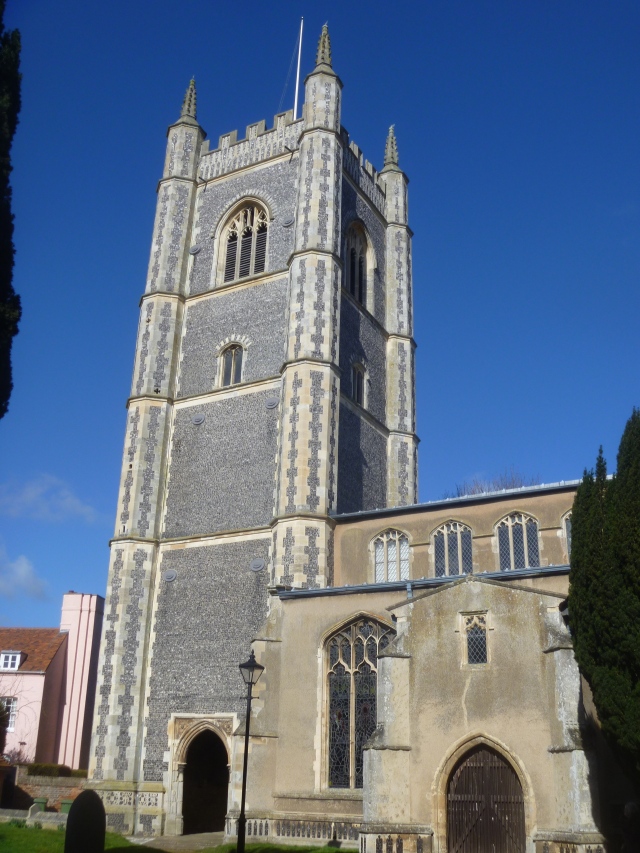 The ‘Galilee’ with Tudor heraldic symbols on the ceiling

Before leaving Dedham for Flatford we walked to Dedham Mill the scene of one his paintings.

Here is the much-expanded and changed Mill today : 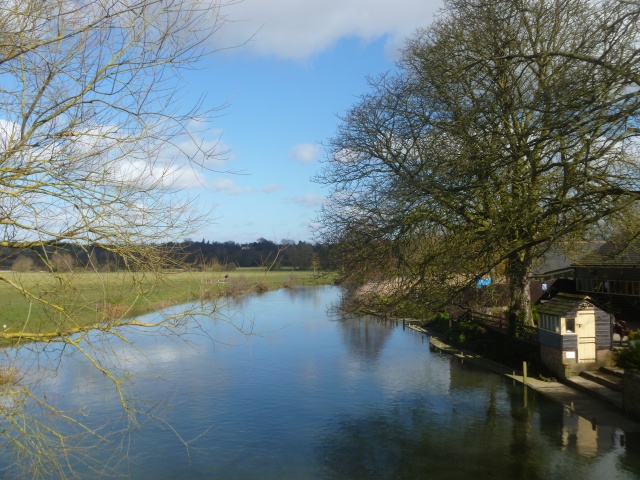 Flatford, just in Suffolk, is now owned and managed by the National Trust. It wasn’t ‘open’ on the day of our visit but there were a lot of staff and volunteers around probably preparing for the new ‘season’ which was to begin the following week (i.e. this week).

There’s a path/lane from the car park to Willy Lott’s House and the site of Constable’s famous painting ‘The Hay Wain’. I could vaguely recognise it as it is much less changed than Dedham Mill. 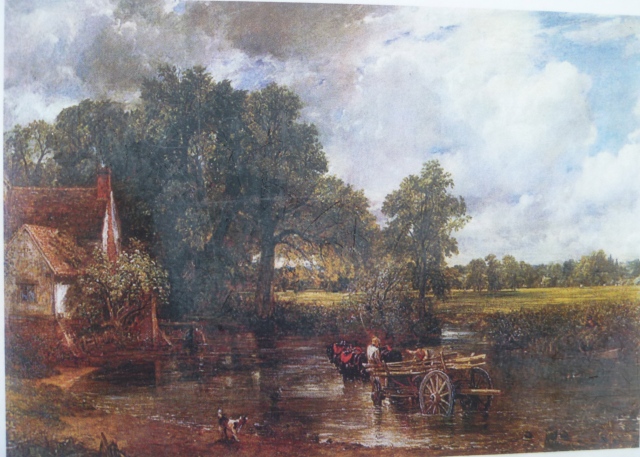 The Hay Wain, by John Constable 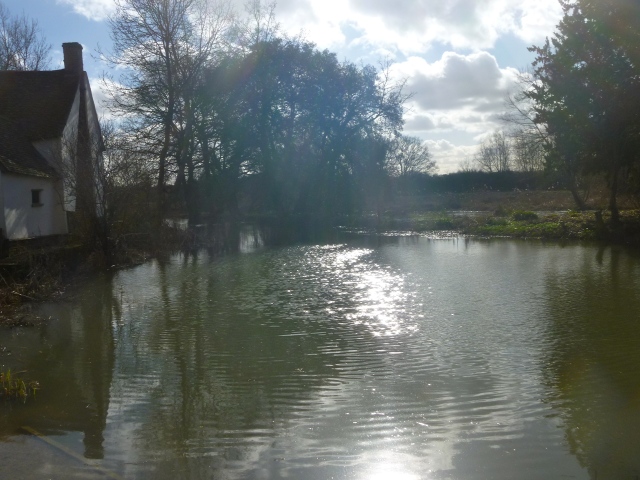 The house on the left hand side of the painting and photo is Willy Lott’s House.

Another Flatford scene Constable painted in the open air was ‘Boat Building at Flatford‘. Many Constables also owned Flatford Mill. There’s an article on the NT website about the Mill ownership and the Constable family here. 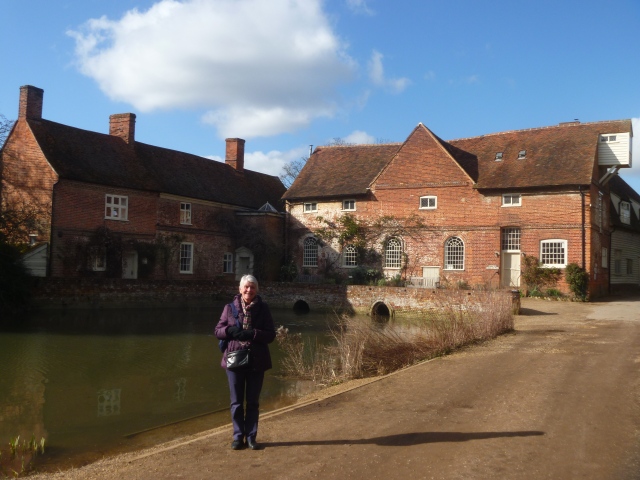 Before leaving we walked over the bridge to join the footpath we should have arrived by on the Wednesday. We definitely made the right decision!