Whilst staying at Sant’Antonio in March I picked up a copy of H V Morton’s “The Traveller in Southern Italy”. It fell open at p.150 where the first sentence of part 8 of chapter 4 reads “The best way to see a country is on foot …”. By coincidence, or design, this sentence constitutes the strap line for ATG (Alternative Travel Group) of whose walking holidays I am a keen advocate. I also read Morton’s description of his visit to the “unexplored” Gargano Peninsula. My reason was, of course, that this June I was already booked on an ATG Footloose trip to explore the Gargano Peninsula. This part of Italy is still relatively unknown although some tour companies do visit and ATG have been sending walkers there for quite a number of years. We chose flights to Bari from Gatwick and ATG made our taxi arrangements for us. We had to go in June since we already had a family wedding on 13th and I had booked the month of May to be Ireland. So we had an inkling that this trip might be harder work, due to warmer weather, than previous walking holidays. In fact, I think I would say that, this one turned out to be the most strenuous of them all. However, as they say, “no pain, no gain”, we felt that we had made a great achievement as we walked along the designated route.

Yet again we had a great Route Manager to help us along the way, give advice, transport our bags and generally be a presence in the background in case of need. The Route Booklet explains the route step by step and we are now very familiar with the distances and what to expect. However, the ever-helpful Matteo explained that in certain places he had attached ‘environmentally-friendly’ blue tape not to show us the way but just to confirm that we were on the right track. It was always a relief to spot this tape! 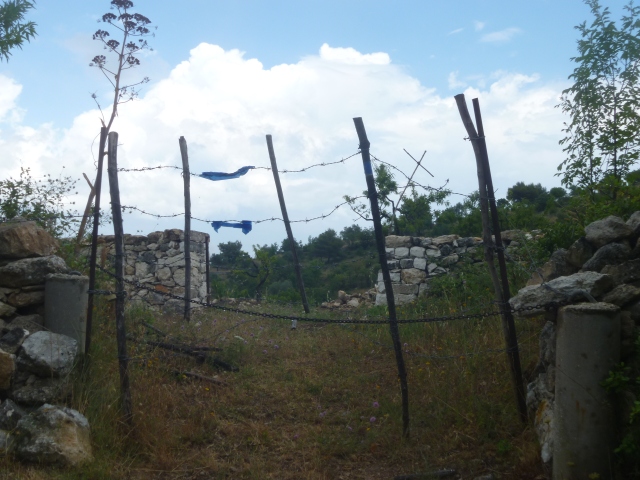 In brief, we walked from Manfredonia to Vieste officially a distance of 41.1 miles but we are positive that we walked a lot further than that! (… and I have the Fitbit to prove it!). ATG sum up the walk thus : “Limestone hills rising to 2,700 feet with coastal paths, quiet lanes, farm and woodland tracks and pilgrim routes leading up to Monte Sant’ Angelo. Occasionally rough under foot.”

There was a long, but pleasant, walk from the first hotel along the promenade into the town centre of Manfredonia. Here we lingered a while viewing the Cathedral, the Castle and Town Hall Courtyard and Museum. 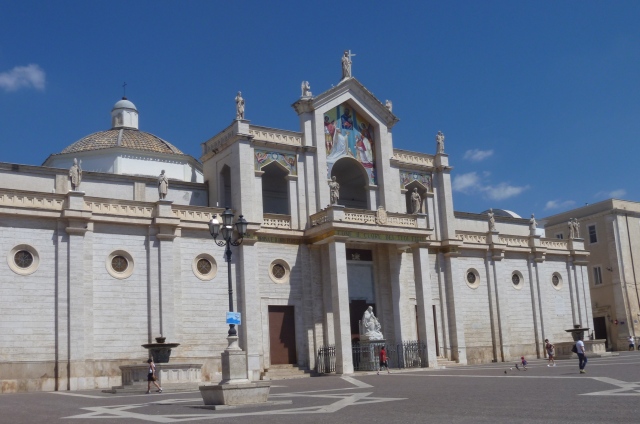 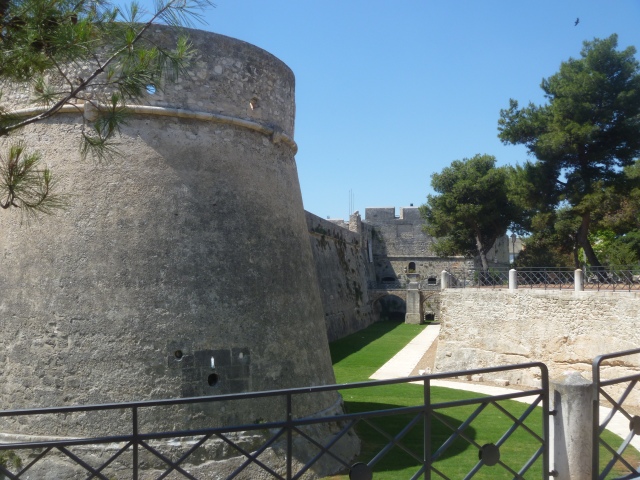 There followed an even longer walk out of the town and through olive groves across the coastal plain before we even started on the “Jazzo Ognissanti” the historical and natural path. 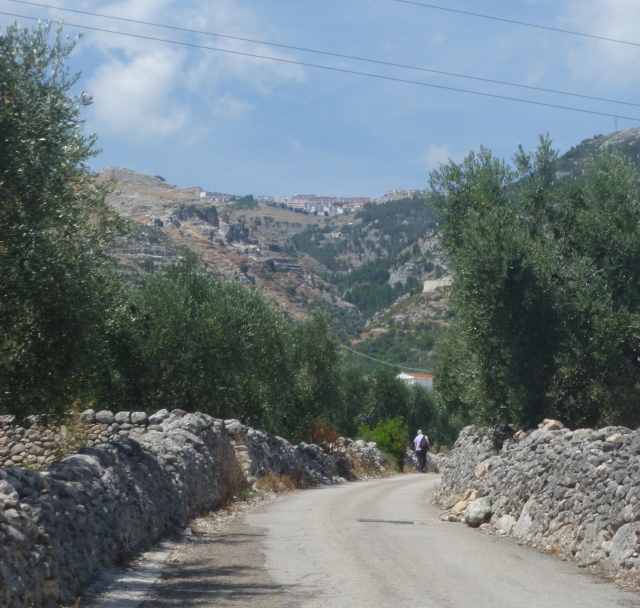 We Climbed Right Up There!

“Walk along the coast then across a small plain before ascending an ancient pilgrim route, once used by crusaders before they embarked for the Holy Land. The route, now a grassy ravine with ruined monasteries on either side, leads to the ancient town of Monte Sant’Angelo (2,755ft), with its whitewashed houses, steep narrow alleys and stairways, and views across the bay of Manfredonia and coast to the south.” 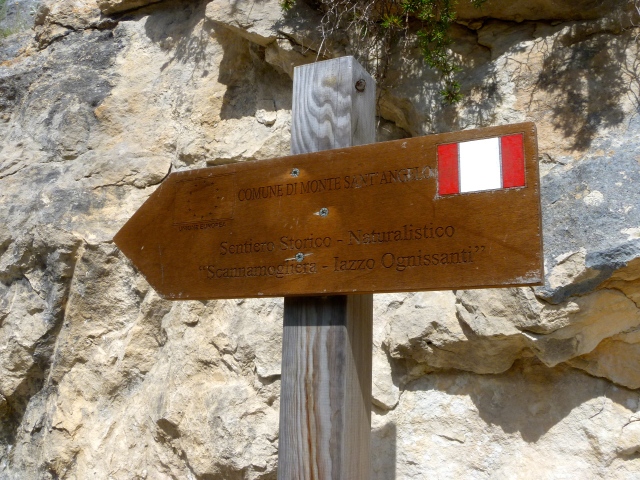 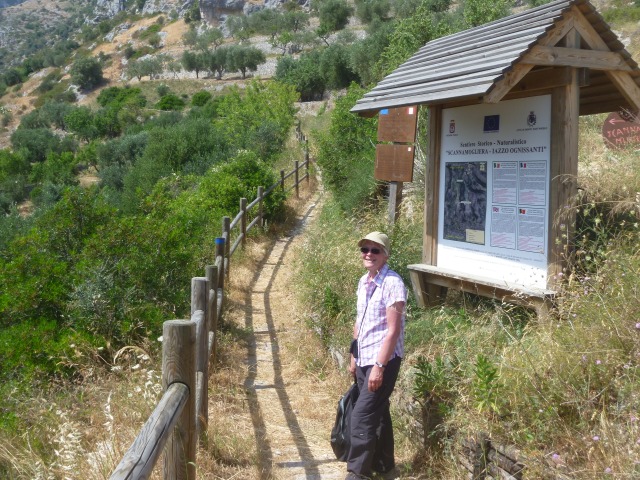 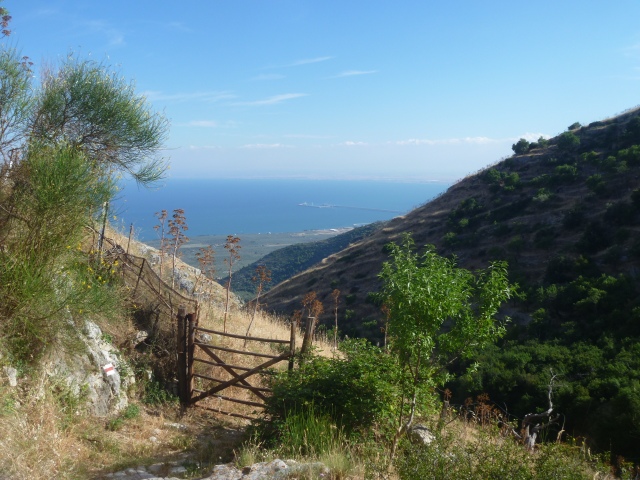 The Pilgrim Route to Monte Sant’Angelo was memorably tough but very special and we enjoyed exploring the town the next day visiting the Sanctuary of St Michael the Archangel, churches and the Old Town (the JUNNO Medieval District) before heading off on the next stage (and getting soaking wet twice in the process) to our next stop, Mattinata. 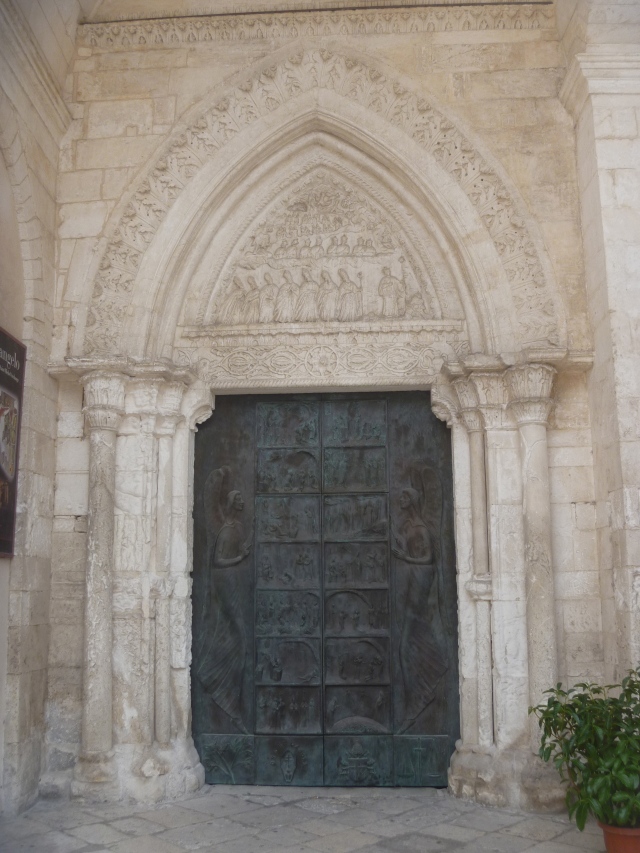 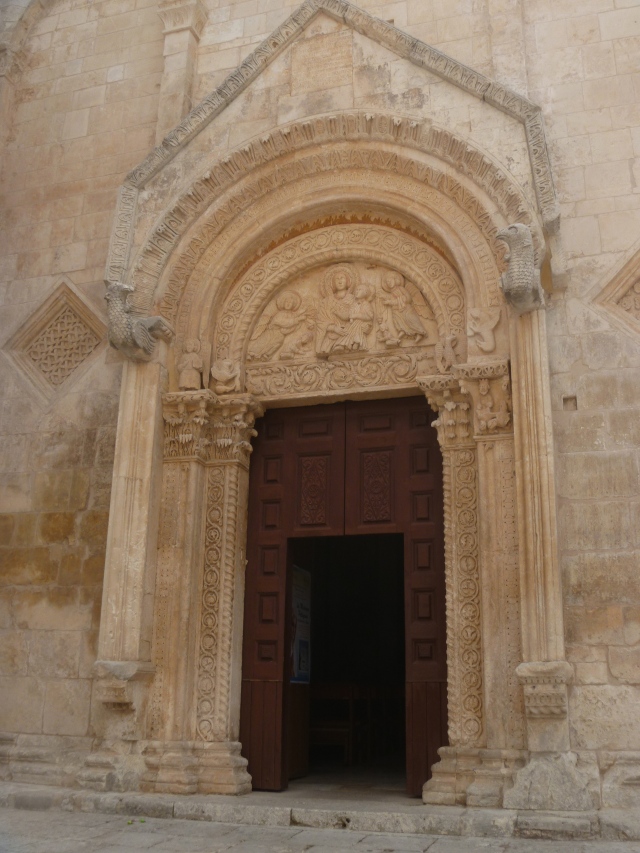 Door to the Church of Santa Maria Maggiore

“Time to explore the town and visit the famous cave church, venerated as being the last place St Michael appeared on earth in 491 AD, before setting off down a well-made pilgrim path to the small town of Mattinata (650ft) set in olive groves, close to the coast.” “You descend from 800m to sea level on rocky paths, stony mountainsides and through woods, with wide views of Mattinata and the coast, following the remains of an old mule track called ‘Strada Comunale Mattinata – Monte Sant’Angelo’, which was once the only way up!” 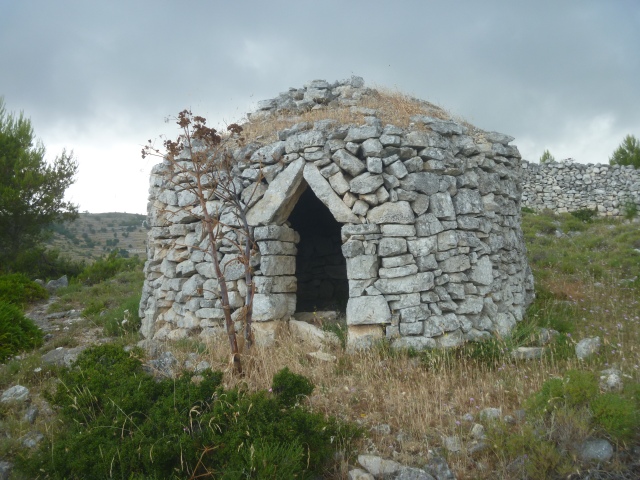 On this section we came across pagliaio: shelters that were once used by shepherds to keep grain and straw for their herds and to sleep in if necessary. We had lunch in the shelter of one as it poured with rain. Later in another, even worse, downpour we sheltered under some trees but these made little or no difference. 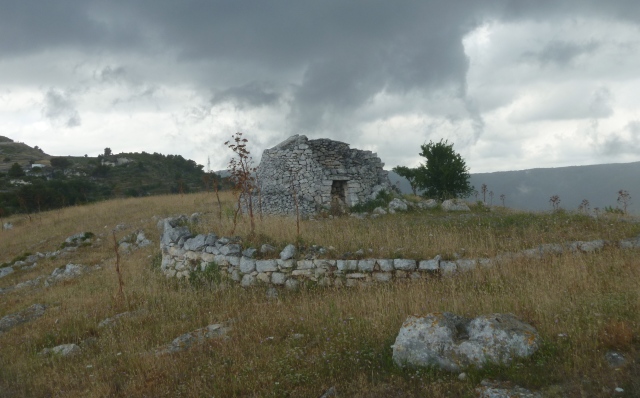 A Pagliaio with storm clouds brewing

Mattinata looked like a nice town but we didn’t stop to find out as the shops were closed in the early Saturday afternoon and we needed badly to dry out our boots and clothes. The local museums had strange opening hours. The Museo Civico 5-10pm Tuesdays and Saturdays and a Museum in the local pharmacy was also open on that Saturday evening. In the end we just couldn’t face getting wet again.

Sunday dawned bright and clear and the walk on that lovely day was virtually over by lunchtime when we arrived at the beach. We ate a leisurely lunch then hiked the final couple of kilometres to our hotel.

We looked rather out of place in our hiking gear!

“The route undulates across two valleys following surfaced road, grassy and stony paths and along a high ridgeline path with wide views east and west to the sea, before descending and across a wide plain. The route brings you close to the shore and along it before a brief section on road to the hotel.” 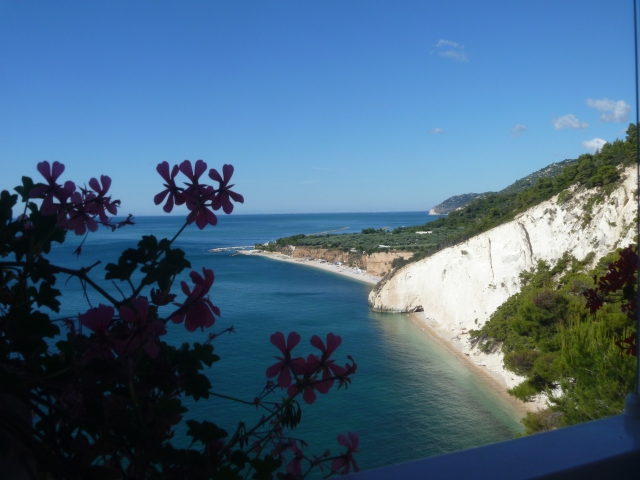 The Beach from our dinner table

Except for Monte Sant’Angelo and Vieste our hotel arrangements were on a half board basis. This is ATG policy when a hotel is not near a choice of good restaurants. The Hotel Villa Scapone is set on a cliff: walk down to the pool and up to the restaurant from our individual room with separate entrance and private terrace. It was a wonderful place to spend a relaxing Sunday evening halfway through our journey. 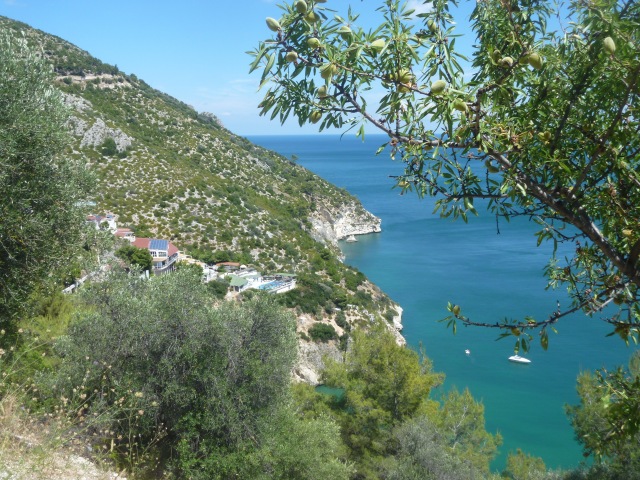 5 comments on “Footloose in the Gargano Peninsula”