Dublin is a City of Words, a UNESCO City of Literature and a city with some great libraries. On my visits in May I managed to get to two of these. I’m looking forward to future trips when I may visit other literary locations across the city.

Most highly recommended to me was The Chester Beatty Library right in the centre of the city and within the walls of the grounds of Dublin Castle itself. 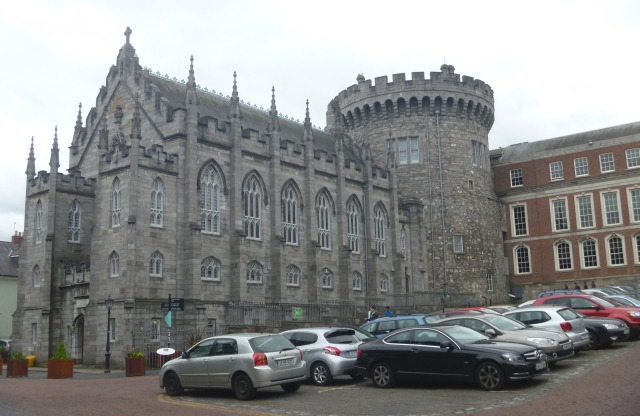 “For over 800 years Dublin Castle has been at the heart of Irish history. From the founding of the first Celtic settlement in the 1st century A.D. to every Presidential inauguration since the foundation of the state, the site has stood witness to some of the most pivotal events in the country’s history.” So it’s interesting enough just walking through the Castle precincts. 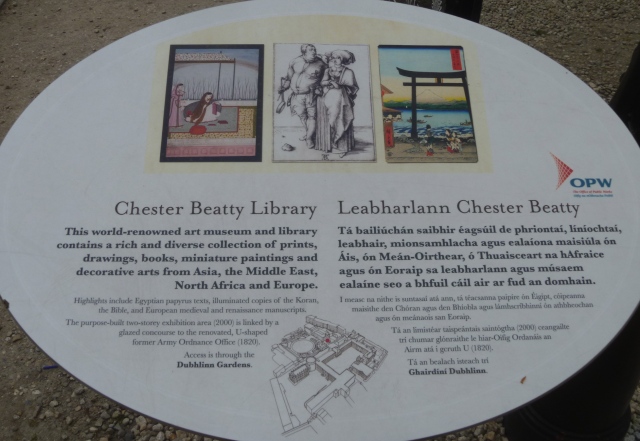 Chester Beatty (1875-1968) was an American mining engineer. He had been an avid collector since childhood – stamps, Chinese snuff bottles, rocks and minerals. During the first decades of the 20th century Beatty moved to Europe and began to collect European and Persian manuscripts and decorated copies of the Qur’an. He took an interest in Japan, the Orient and Egypt. He actually bought a house near the Pyramids. 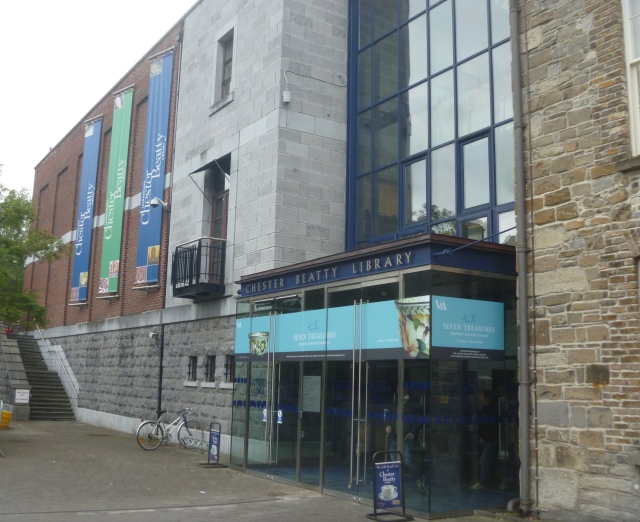 He later bought modern editions but had very conservative taste. He preferred books where the text and image formed pleasing compositions. Such as here a Gregynog Press issue of The Fables of Esope, 1931. 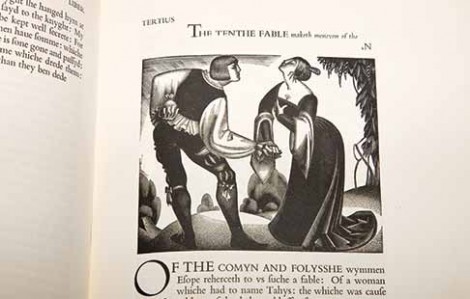 No photography allowed but I found the above pictures here

He loved books for their own sake as opposed to having a love for literature. He was attracted to decorated books/illustrations/iluminations and fine bindings. He didn’t like modern art and avant garde book designers, illustrators and binders are not represented in his collection. His mantra was “quality, quality, quality”. He was probably the last of the great book collectors after J. Pierpoint Morgan and Henry E. Huntington. Beatty also appreciated the 18th and 19th century print cabinets essential to the gentleman’s library.

In 1950 Chester Beatty decided to move to Ireland and he built a library for his art collection on Shrewsbury Road which opened in 1954. Upon his death, the collection was bequeathed to a trust for the benefit of the public and his priceless collection lives on as a celebration of the spirit and generosity of Chester Beatty.

I enjoyed studying the short videos demonstrating print techniques : woodcuts, engraving, etching, lithography and chromolithography. And a trust fund allows the Library to continue buying works today which complement the original collection. It was during my visit to The Chester Beatty Library that I realised that I’m really much more interested in printed books and printing methods than in the beautiful and exquisite manuscripts.

Charles Beatty summed up his life “It has all been a great adventure”. 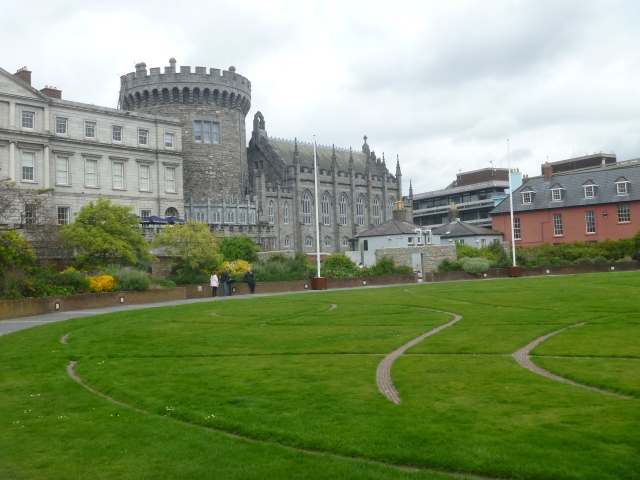 The Castle Grounds and Grass Maze

Moving on from the Chester Beatty Library I headed back through the Castle precincts and after a quick lunch in the lovely Avoca store found my way to The National Library of Ireland. A friend, and fellow member of the Leeds Library, recommended to me after a recent visit “YEATS: the life and works of William Butler Yeats” [1865-1939]. It’s an almost permanent exhibition (ongoing since 2006) but it is particularly relevant this year as 2015 is the 150th anniversary of Yeats’s birth. 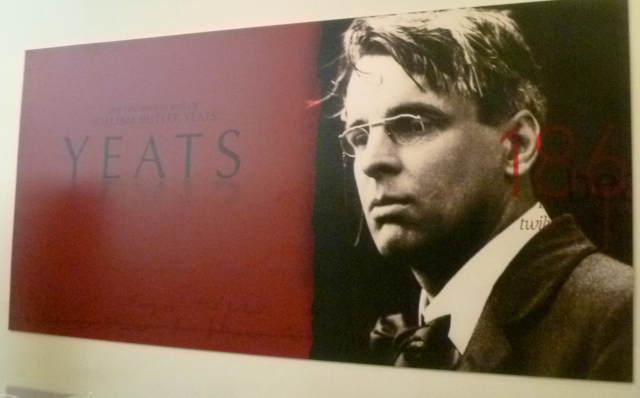 I was particularly interested to discover more about the life of Ireland’s national poet. He came from a family of artists and creatives. He played a huge role in the establishment of the Abbey Theatre in Dublin which he founded along with Lady Augusta Gregory in 1904 with the main aim of promoting Irish writers and artists which is still incorporated in its charter today. He had a great interest in the occult and Celtic mysticism. Many of his poems are about places in Ireland, and elsewhere. 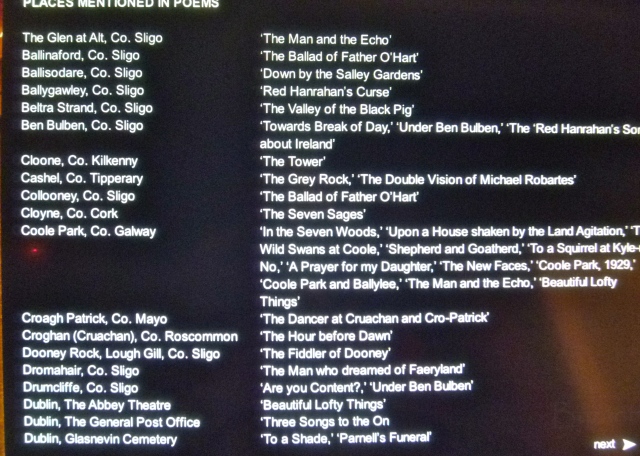 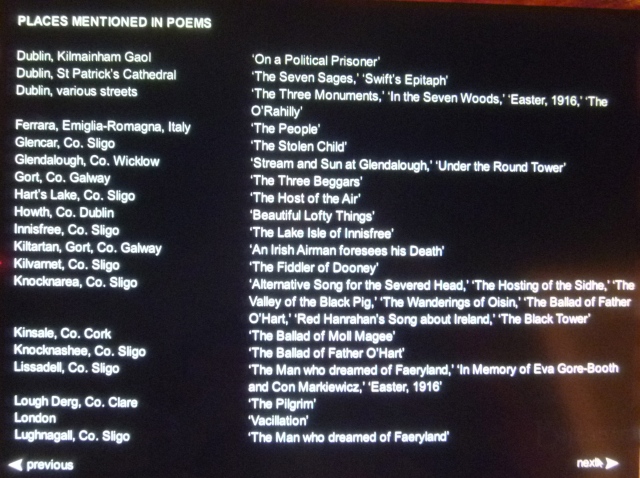 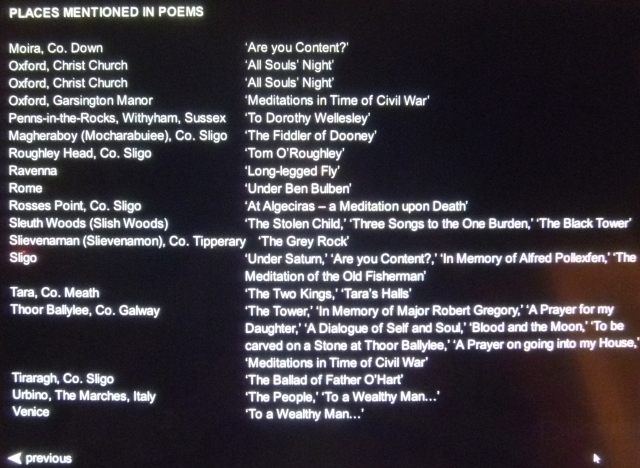 By coincidence during my trip in May HRH The Prince of Wales and his wife The Duchess of Cornwall also visited Ireland and planted a tree at the grave of William Butler Yeats at Drumcliffe, Co. Sligo. 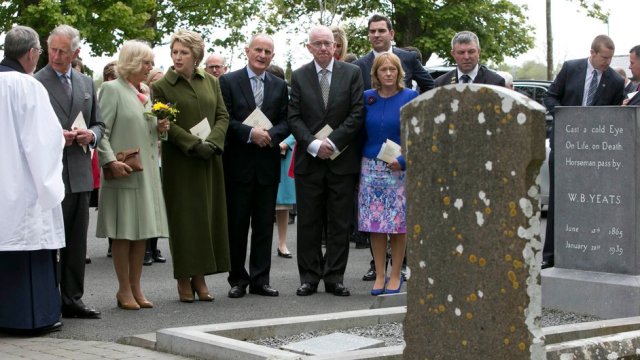