“Bloomsday is a celebration that takes place both in Dublin and around the world. It celebrates Thursday 16 June 1904, which is the day depicted in James Joyce’s novel Ulysses. The day is named after Leopold Bloom, the central character in Ulysses. The novel follows the life and thoughts of Leopold Bloom and a host of other characters – real and fictional – from 8am on 16 June 1904 through to the early hours of the following morning.

Celebrations often include dressing up like characters from the book and in clothes that would have been the style of the era. One of the hallmark fancy dress items of Bloomsday is the straw boater hat. Celebrations come in many different forms like readings, performances and visiting the places and establishments that are referenced in the book. The Bloomsday Breakfast is another common celebration, which involves eating the same breakfast as Leopold Bloom consumes on the morning of 16 June. This includes liver and kidneys alongside the typical ingredients of an Irish fried breakfast.” 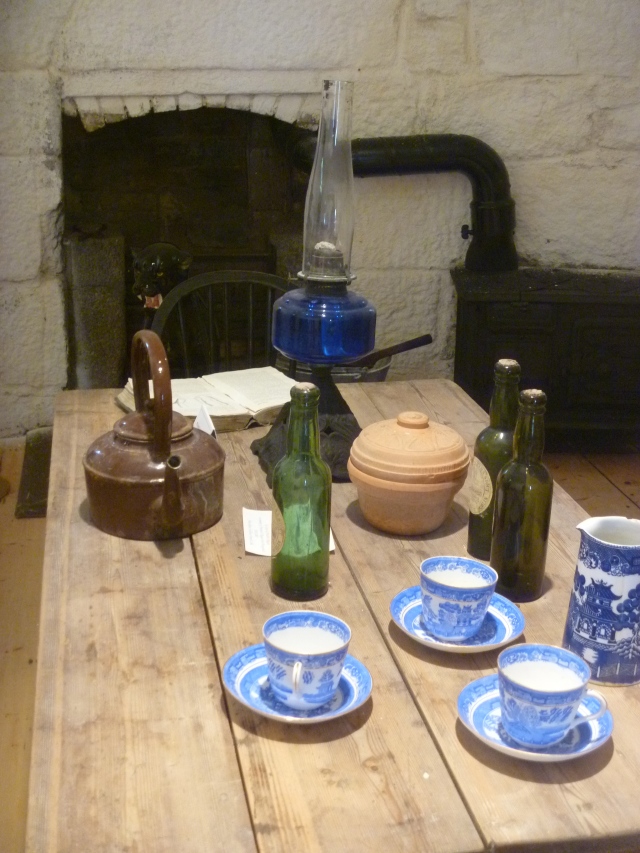 Joyce’s Table set for Breakfast at The Martello Tower

Everyone else’s Bloomsday is on 16th June each year. When I arrived in Dublin on this day in the early 1990s there was no mention of it all as far as I could tell. I suppose a few dyed in the wool ‘Ulysses’ fans have probably got together on that day over the years to celebrate. But now it’s a big festival and this year’s ran from 11 – 16 June and included guided walks, pub crawls, book readings, author visits, brunches and more besides.

My special ‘Bloomsday’ took place a month earlier when Declan and I drove over to Dun Laoghaire for the day to visit the new Library and the Martello Tower nearby. We didn’t dress up but we’d had a ‘full Irish’ breakfast before leaving home. 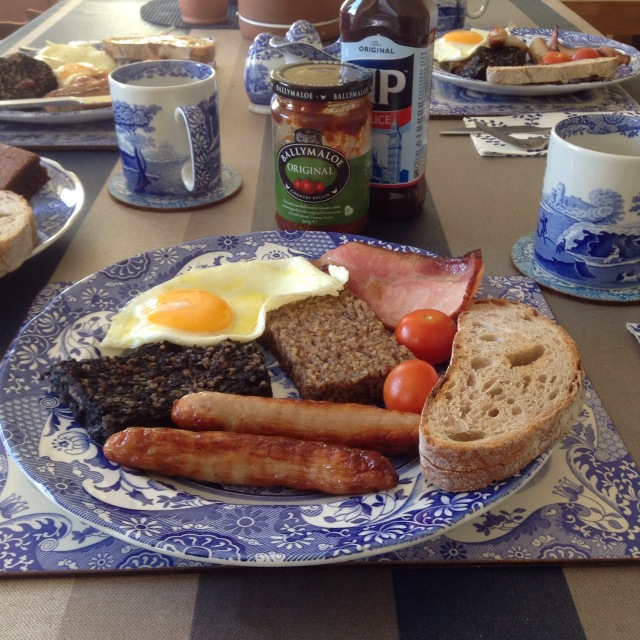 After a quick coffee and half a slice of cake each in the Library cafe we set off to walk along the Promenade towards Sandycove and the James Joyce Tower and Museum where Andrew, a friend of Declan’s, was waiting to welcome us. Andrew is a volunteer at the Museum and was keen to share his knowledge and enthusiasm for Joyce and his works and has read ‘Ulysses’ many times. 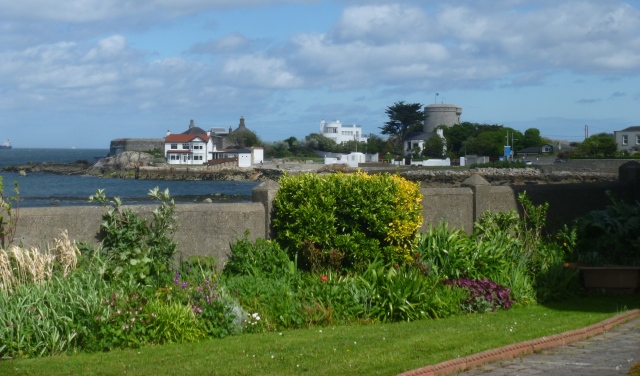 The Martello Tower from the Promenade

After a brief introduction, (the tower was saved and transformed into a museum by a group of volunteers) Declan and I spent time inspecting the displays and making our way up the tower to eventually arrive outside on the roof and enjoy 360 degree views of Dun Laoghaire and out towards Dublin Bay and the Irish Sea. 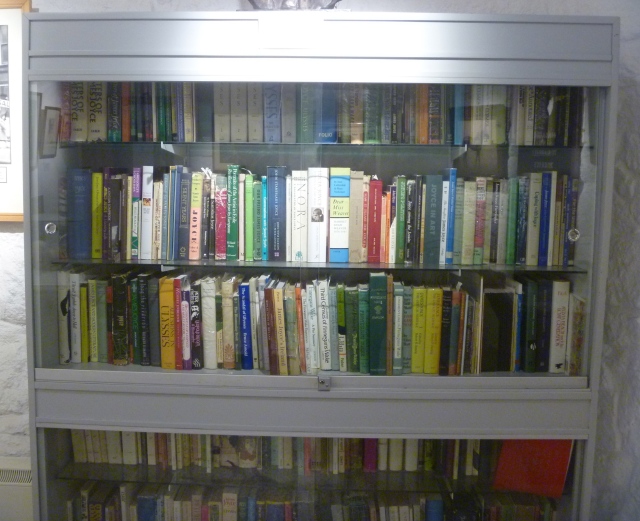 The Joyce Library at The Tower Museum 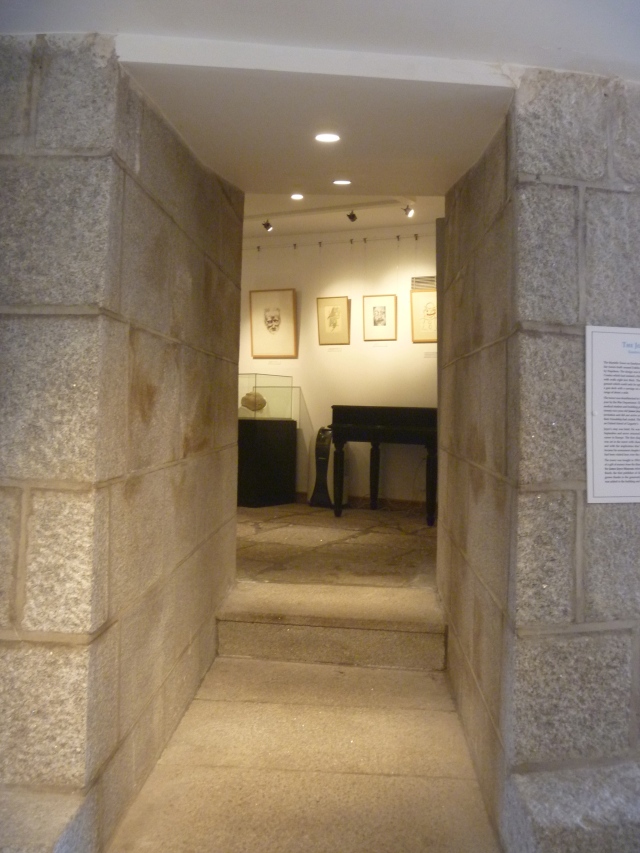 Entering The Tower itself from reception 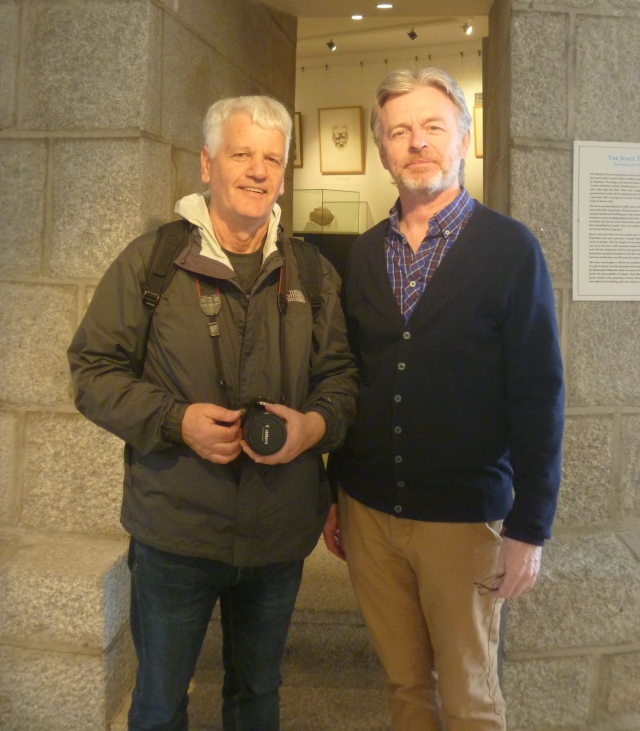 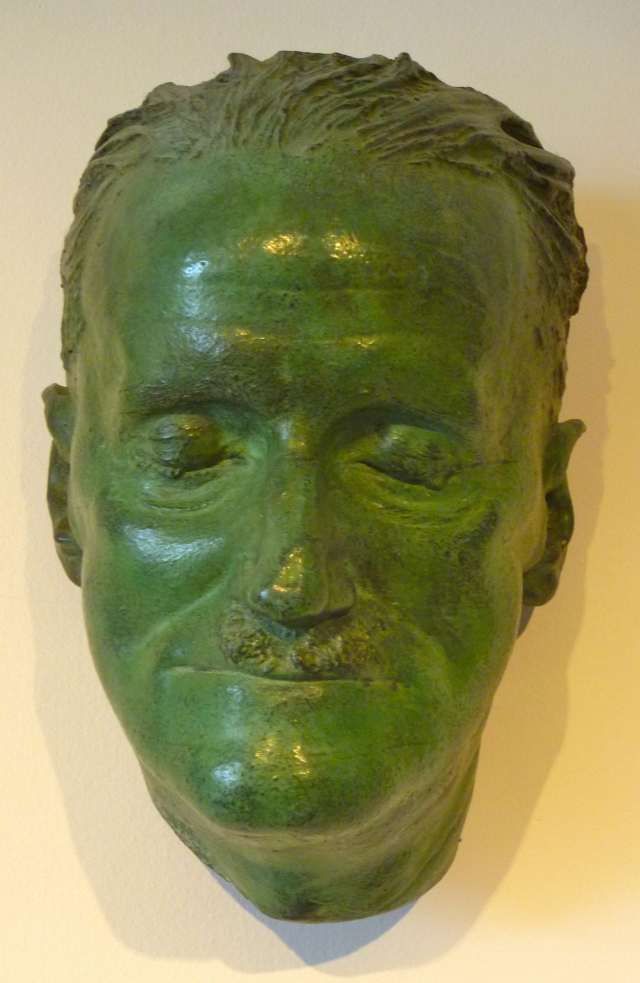 When Joyce died in Zurich in 1941 two plaster death masks were made by the sculptor Paul Speck for Carola Giedion-Welcker, who presented one to the Joyce Tower. This bronze copy was given by Michael Scott. 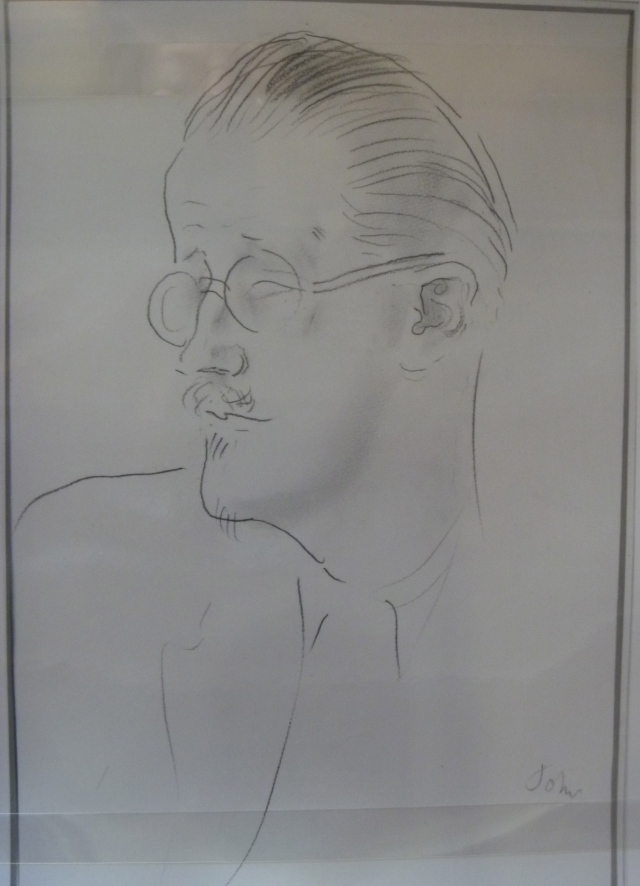 Photograph of the portrait of Joyce by Augstus John. Joyce sat for Augustus John in November 1930. 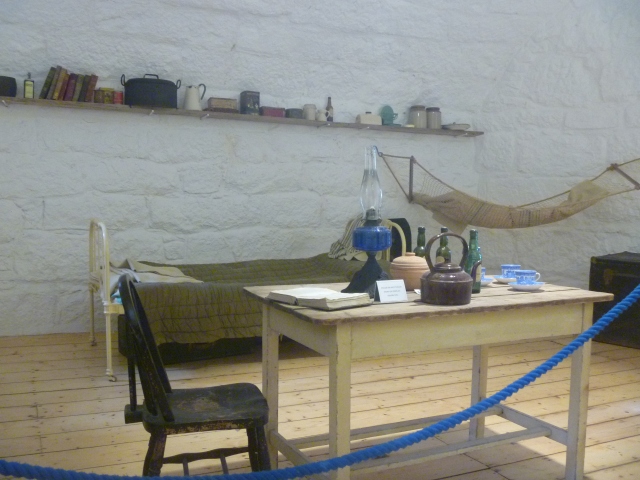 Joyce’s Room on the top floor

Dun Laoghaire from The Tower Roof

As you arrive at The Tower you pass by Forty Foot Bathing Place. This is an intriguing outdoor swimming location immortalised in James Joyce’s ‘Ulysses’ and until recently restricted to men. It is maintained by the Sandycove Bathers Association and it’s lovely to see the old signs have been left in situ. Much as I love swimming I didn’t feel the urge to get in the water – it looks pretty dodgy to me! I who had a ‘mad Atlantic swim‘ later in the month. 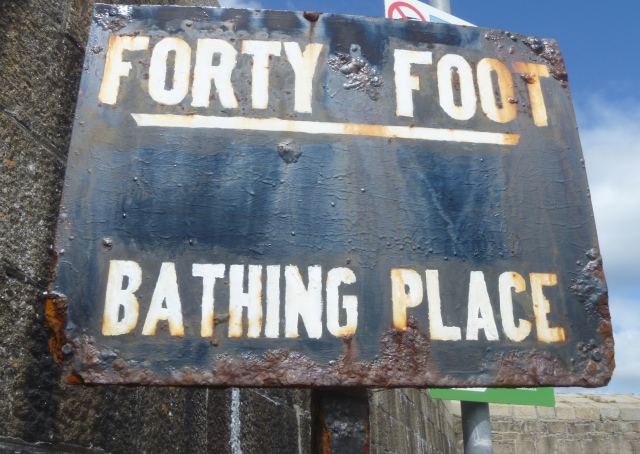 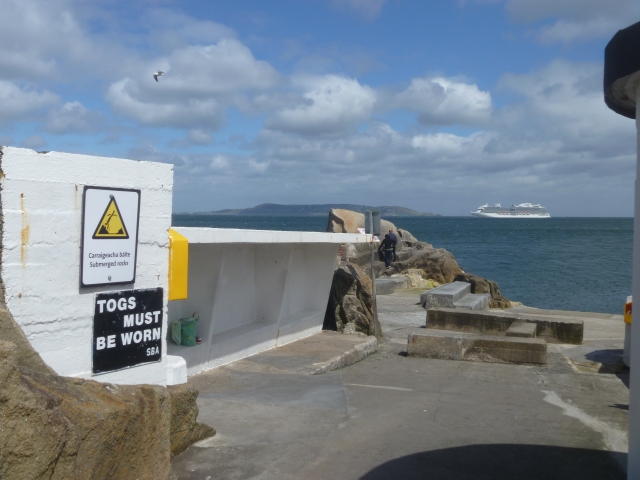 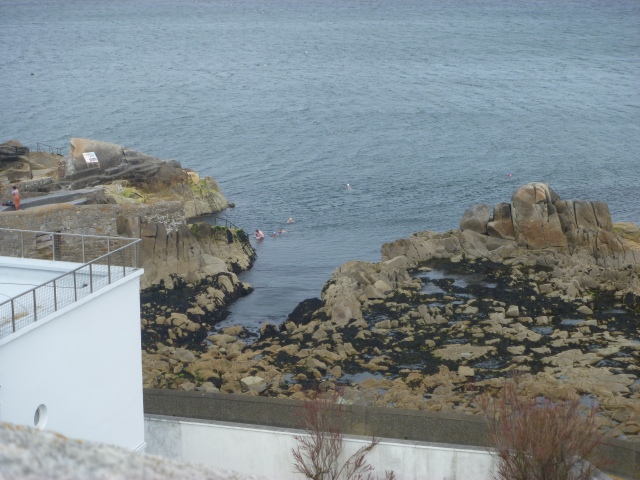 Brave souls in the water (from the Tower roof)

From the Tower it was a short walk to another Joyce/Ulysses location The Charles Fitzgerald pub where Andrew, Declan and I had lunch and talked about Joyce and ‘Ulysses’ and how much I’d enjoyed ‘Dubliners’ and the atmosphere Joyce creates of the city and the frustrations of its people around the turn of the last century. Of course, Dublin and its inhabitants have now changed almost out of all recognition. 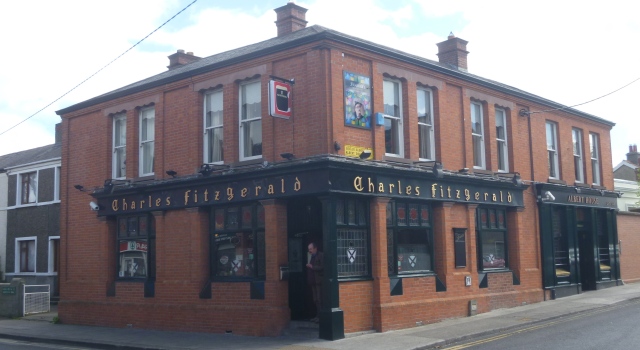 “For most of the last hundred years, if you wanted an interactive geographic experience of Dublin—the sights, the sounds, and especially the people—you couldn’t do much better than read the fifteen linked short stories of James Joyce collection.” [source, and read more about Dubliners] 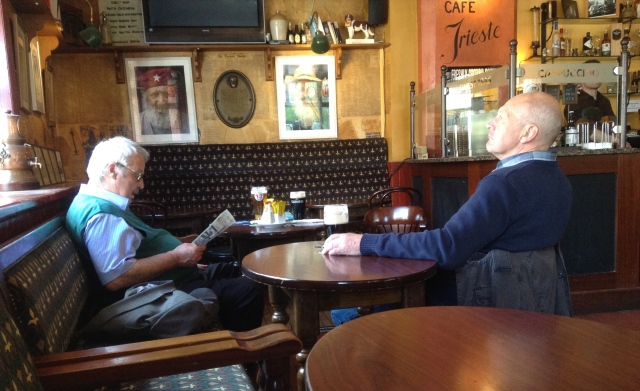 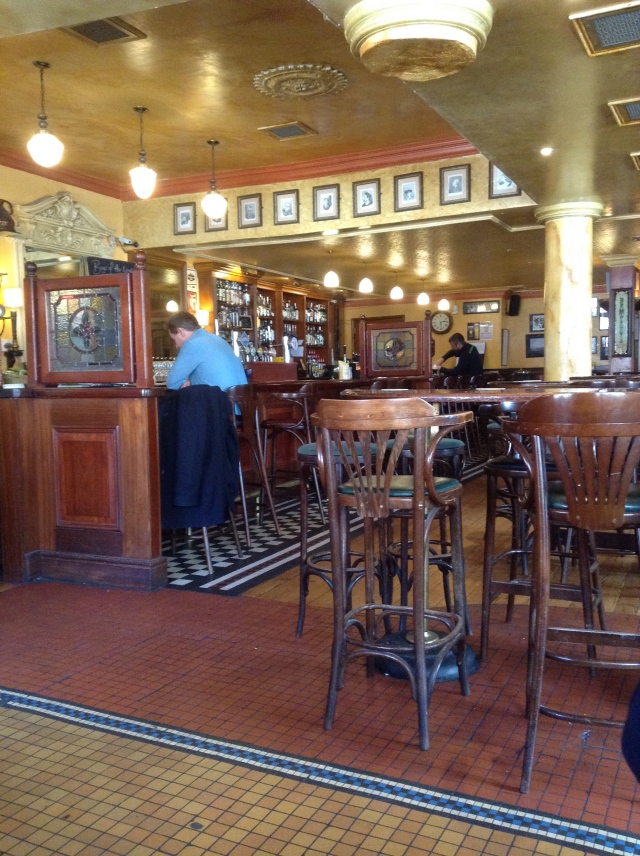 Inside The Charles Fitzgerald

Andrew told us about a reading group which meets at the pub every week to read and discuss a few pages of ‘Ulysses’ at a time. This reminded me of a film I saw last year called The Joycean Society. The film gives a glimpse into the lives of the members and meetings of the Zürich James Joyce Foundation. Dora Garcia’s film is a “surprising, charming film as much a homage to the group’s dedication (11 years on, they are in the midst of their third lap of the tome) as it is a salute to Joyce’s destruction of language.”

From ‘A Portrait of the Artist as a Young Man’

Thanks to Declan and Andrew for a wonderful day of libraries and literature … and a walk by the sea in the sunshine!