As we boarded the number 7 bus opposite San Marco we appreciated that it was good to sit down for a while. The journey up to Fiesole takes about half an hour. And all was quiet when we got there. We chose to visit Fiesole on the Wednesday because that was the only day that didn’t threaten rain although it often looked very likely. We got off the bus in the main square and noticed a considerable drop in temperature. We soon found a little bakery where we chose a savoury pastry each followed by some little sweet cakes and tea. Refreshed we then began our tour of Fiesole.

“Settled in the 7th century BC, Fiesole was a powerful source in central Italy by the 5th  century BC. It began to decline after the Romans founded Florence in the 1st century BC, but kept its independence until 1125, when Florentine troops razed most of the city.

The Duomo of San Romolo in the Piazza Mino da Fiesole was begun in 1028 and has a massive bell tower. From here walk up the square to the front of the 14th century Palazzo Communale. 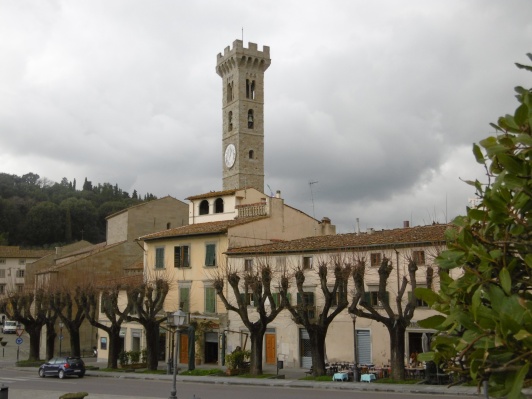 Here there is a bronze statue of King Vittorio Emanuele II and Garibaldi, called Meeting at Teano.

Returning to the church take the first right down Via Dupre to the Roman Theatre and into the Archaeological Park.

After its defeat by the Florence in 1125, Fiesole went into decline and many Etruscan and Roman remains went undisturbed until excavation in the 1870s. The Teatro, built in the 1st century BCis used for the annual Estate Fiesolana festival. Its tiers of stone seats can hold 3,000 spectators (yes, we were amazed when we read this!).

Next to the Theatre is the Museo Faesulanum built in 1912-14. [We didn’t visit] Inside are finds from the Bronze Age onwards: coins, jewellery, ceramics, bronzes and marble. The building is a copy of a 1st century Roman temple, whose remains are in the northern part of the complex.

It is built on Etruscan foundations, and part of the Roman frieze dating from the 1st century BC is still intact. There are some partially restored baths close by and at the northern edge of the park 4th century Etruscan walls.” [Memories of walking the Etruscan Lanes to Orvieto came flooding back!]. 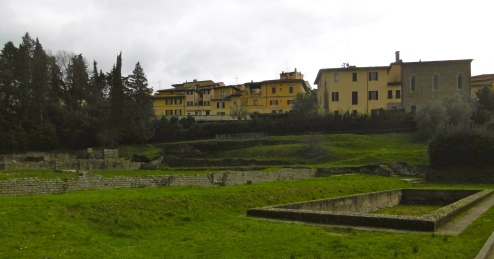 Roman Baths with Fiesole behind 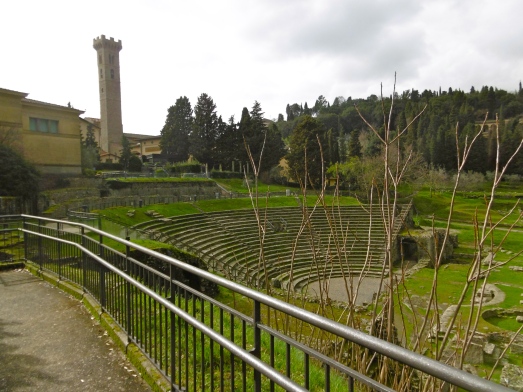 Across the road from the Archaeological Park is another museum which we didn’t visit as we were keen to take the winding lane Via di San Francesco for views over Florence. 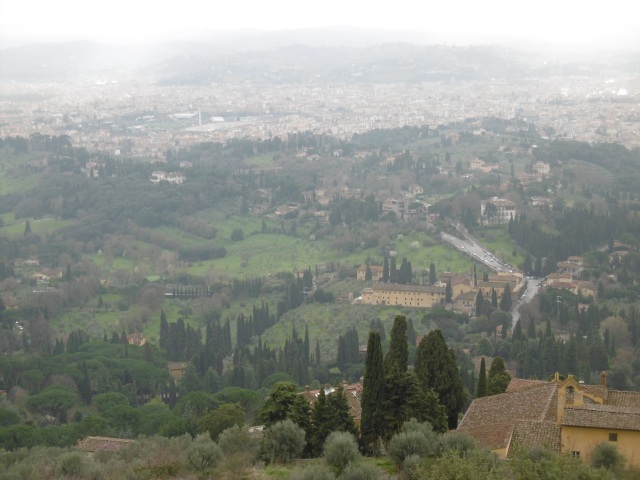 The Misty View with Rain Threatening

There were two churches up here the Sant’Alessandro was closed but the San Francesco, a Franciscan Friary founded in 1399 and restored in 1907 was open and we went inside.It has a pretty cloister and a display of artefacts used by the monks. 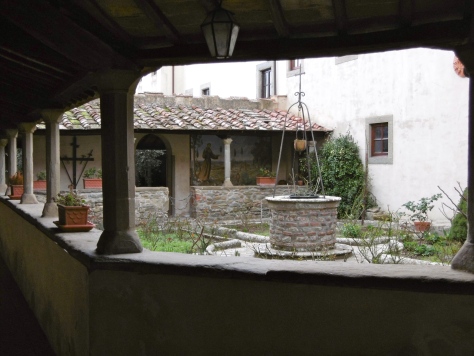 The Pretty Cloister from Above

The Genuine Cell of San Bernardino

We took the path down through the park and began our descent to the village of San Domenica. However, frustratingly we took the wrong path and when realised our mistake were too tired to tramp back up the hill to the town so hailed the next bus back into Florence. At least this gave me the chance to visit the English Cemetery which is not far from San Marco.

7 comments on “The Fresh Air of Fiesole”