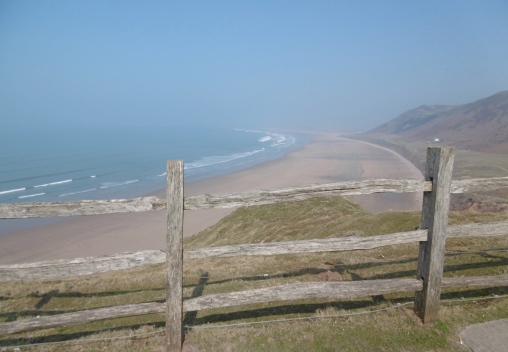 Last week I met with two Welsh friends and we spent a few days on the Gower Peninsula, mainly hiking but also having a very sociable time which included good food home cooked, good pub grub, attendance at a performance of  The Swansea Accordion Orchestra in the local Village Hall at Port Eynon on the Saturday evening and visits to a good few churches.

Rhossili Down and Mewslade Bay Walk 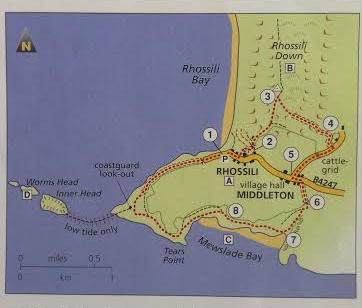 The car park is National Trust owned so my membership sticker on the car windscreen allowed us to park for free all day. There is a NT shop, a non-National Trust cafe and a hotel just by the car park.

We left the car park, walked towards the village centre and along an enclosed path past the churchyard. After visiting the church (2) we followed a public footpath onto Rhossili Down and had a steepish climb up towards the triangulation point at the summit (3). 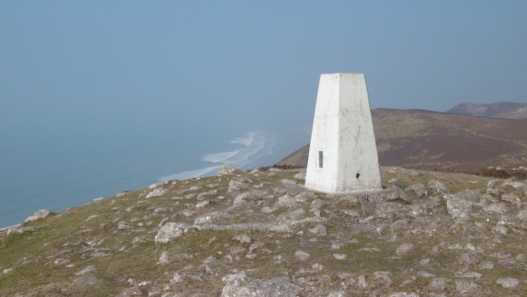 Triangulation Station on Rhossili Down

Just before the trig point the broad grassy path to the right eventually emerged onto a well-defined track downhill. At the surfaced lane we turned right and passed the former home of Edgar Evans of the Scott-Polar Expedition between (4) and (5). 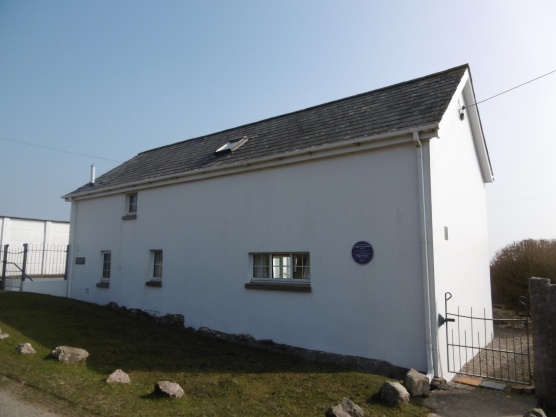 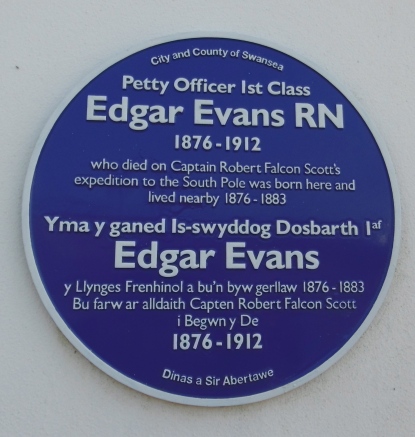 At the village of Middleton we took a track signed “Mewslade Bay”.

The narrow path between hedges ended at a gate and across the ‘Viel’ meadow we could see a seat with a sea view. The perfect place for our lunch stop (6). 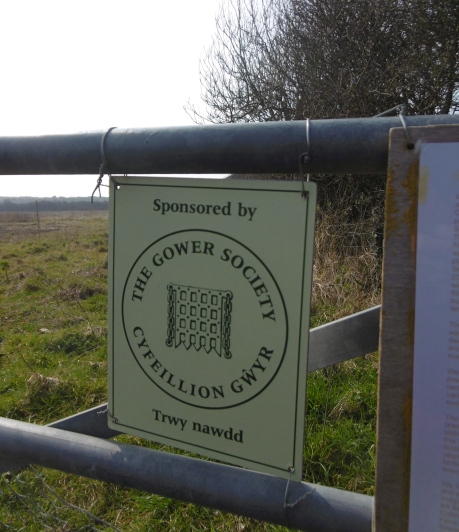 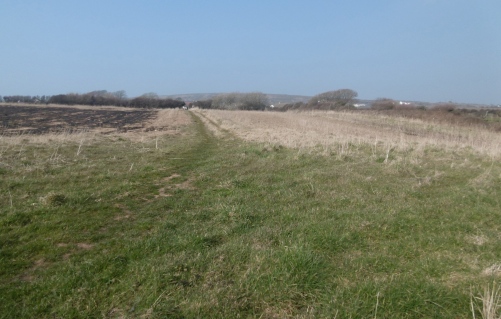 The Nitten Field ‘Viel’ is sponsored by The Gower Society

From here we kept to the cliff path (7) next to a wall being careful of sudden drops. Because of this we kept to the upper path despite the walk description declaring that better views could be seen from the lower path. We turned off the cliff path before Worms Head at about (8) and returned across fields to Rhossili, the cafe and the car park. 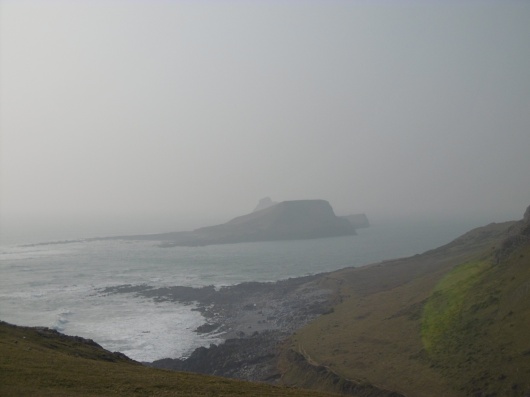 Walk notes along the route:

Rhossili [A] : A windswept village above a superb 5-mile arc of beach from Burry Holm south to Worms Head.

‘Viel’ : is a farming practice whereby the benefit of fertile land is shared out between farmers over the years. It is a survival from the medieval open-strip field system. 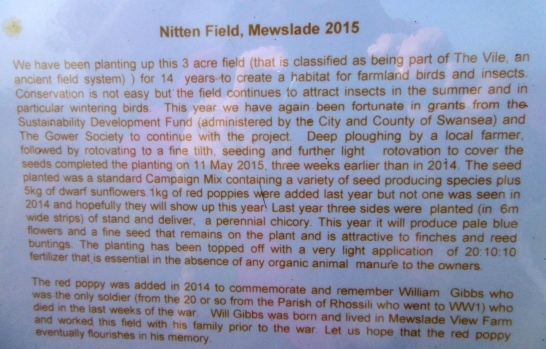 For more information about the Nitten Field click here.

Rhossili Down [B] : Formerly a vertical cliff, but erosion has downgraded the slope to a hillside, giving a most unusual juxtaposition of coast and upland. From 632 ft summit, the highest point on Gower, a magnificent view extends over the peninsula, while Lundy Island, Devon, Carmathenshire and Pembrokeshire may also be in sight. Unfortunately, although we had blue sky and sunshine the views were very hazy. 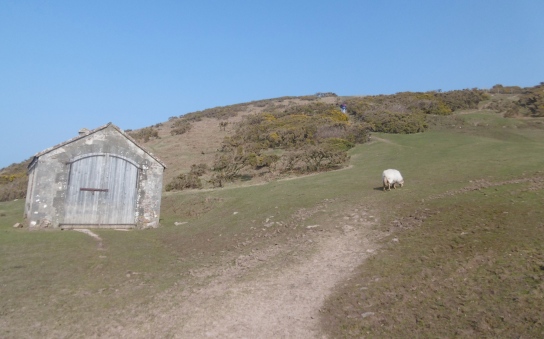 The path rises up Rhossili Down

Mewslade Bay [C] : Part of the South Gower Nature Reserve these splendid Carboniferous limestone cliffs, which have been tilted, folded, and faulted by the earth’s movements, are Gower’s most striking coastal landforms. Below is a sandy beach, less frequented than Rhosilli’s. It is a rare habitat for certain wild flowers and insects. 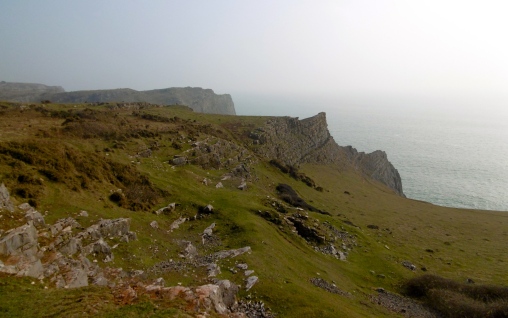 Worm’s Head [D] : The serpentine slender mile long western tip of Gower is an important bird sanctuary. A slipway between mainland and the Inner Head is exposed at ebb tide, when you can walk across over the rocks: rough but fun (but take care not to get cut off by the tide: only venture onto it 2 hours either side of low tide). We didn’t try it! 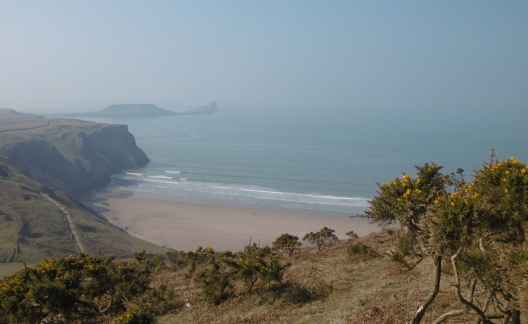 Worm’s Head from Rhossili Down

As it was such a hazy day we decided to return the next day in hopes of finding a better view. We were rewarded. We parked again at the NT car park and then followed the clear track to the manned Coastguard Station with excellent views over Worms Head. 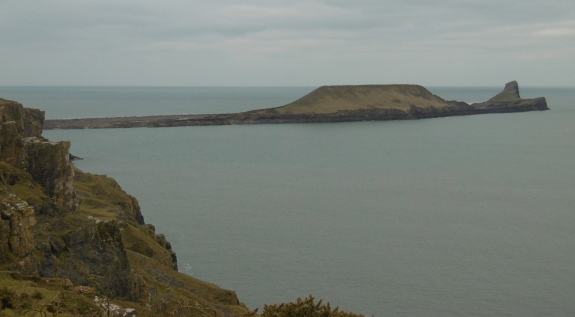 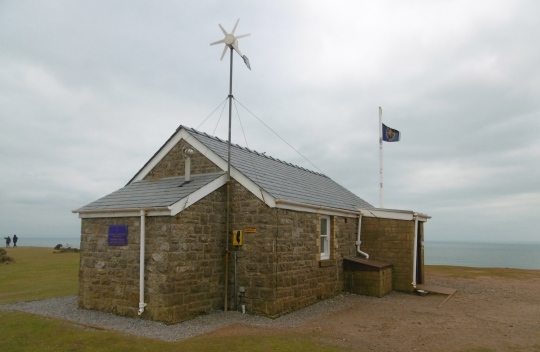 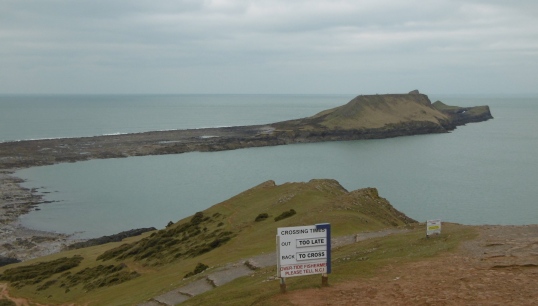 Too Late to Cross

The beach at Rhossili is one of the most beautiful I have ever seen. 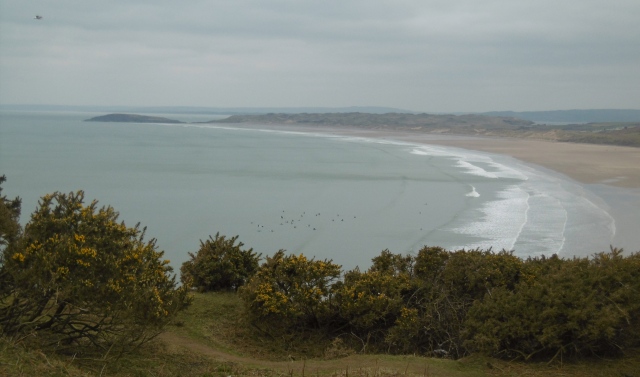 The black specks in the sea are surfers

5 comments on “Gower Peninsula Walks : Rhossili Down and Mewslade Bay”