In addition to all the Mackintosh connections in Glasgow we found time to explore the permanent collections at both the Hunterian and the Kelvingrove Galleries; to visit Glasgow Cathedral and Necropolis and enjoy a session at Glasgow’s Annual Book Festival “Aye Write“. The festival takes place in the beautiful Mitchell Library, one of Europe’s largest public libraries, which has been one of Glasgow’s iconic landmarks since it opened in 1911.

As we left the Willow Tea Rooms at 5pm on Saturday afternoon we noticed the large display in Waterstone’s Book Shop window. It reminded us that Linda had mentioned the Book Festival to us and had encouraged us to investigate the events and talks. Programmes had run out at the shop but we were assured there were still plenty to be had from the library. So we decided to return up Sauchiehall Street and found the Mitchell Library buzzing with festival-goers and activity. I have never seen such a crowded library. There were cafes plus two pop-up bookshops.

Scanning the very full programme we chose a talk for Sunday afternoon : 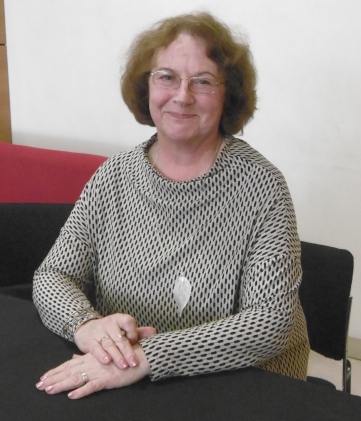 CATHERINE CZERKAWSKA
The Jewel
13.30 – 14.30 | £9
Catherine Czerkawska is a multi-award-winning
novelist and playwright who lives in Ayrshire. Her
new book, The Jewel, is a luscious historical novel
about Robert Burns’ wife, Jean Armour, set during the
dramatic years of their courtship in Mauchline, their
married life at Ellisland and in Dumfries, and Robert’s
early death, all against a background simmering with
political intrigue and turmoil.
Join Catherine in The Burns Library at The Mitchell
for what promises to be a unique take on Scotland’s
most famous literary son.

Catherine read from the first pages of her book and there was a Questions and Answers session with the chairwoman followed by a further reading and questions from the floor. We had made a good choice and I liked the Scottish literary connection so I bought a copy of the book, although it isn’t actually published until May, apparently, and Catherine signed it for me. What a lovely cover!

Founded in 1807, The Hunterian is Scotland’s oldest public museum and home to one of the largest collections outside the National Museums. Besides the Mackintosh House it houses Dr William Hunter’s collections including scientific instruments used by James Watt, Joseph Lister and Lord Kelvin; Roman artefacts from the Antonine Wall; Hunter’s own extensive anatomical teaching collection; and his collection of coins and medals. Collection continues today and we noticed a couple of Art Funded items including furniture related to Mackintosh.

The permanent art displays include works ranging from Rubens and Rembrandt to the Scottish Colourists and Glasgow Boys and the world’s largest permanent display of the work of James McNeill Whistler. I’m a fan of Whistler and his outsize portraits of society women. Last year I enjoyed reading “The Street of Wonderful Possibilities: Whistler, Wilde and Sargent in Tite Street” by Devon Cox. Read a review here. Luckily, we had time to visit the collection and enjoy the huge Whistler portraits and the lovely, homely, evocative and rather touching Chardin “A Lady Taking Tea”.

This beautiful masterpiece by the French 18th-century painter, Jean-Siméon Chardin, was voted Scotland’s second favourite painting by readers of The Herald newspaper. An evocative image of a lady drinking tea, it probably depicts Chardin’s wife, Marguerite Saintard, who died only two months after the painting was completed. Acquired by our founder, Dr William Hunter (1718-1783), it is part of a small but significant group of Old Master paintings that includes works by Rembrandt and Rubens.

At Kelvingrove on Sunday morning I had been intrigued by the website mention of a Medieval satchel.

These remains of an early medieval satchel are the oldest ever found in Scotland. You can still see the holes in the leather where the satchel would have been held together with leather thongs.

Manuscripts and images from this period show monks carrying bags similar to this, which suggests the satchel could have held a religious book, annals or possibly the relics of a saint.

At first the scraps were thought to be part of a jerkin or jacket but much later, and after further study, a curator hit on the fact that they made up a bag.

The satchel pieces can be seen in the gallery “Scottish history and archaeology” which includes a wealth of material relating to the early settlements across Scotland and life on St Kilda. Also breathtaking for me was the jet necklace found buried with a knife and whetstone in a cist burial at Monybachach, Argyll. 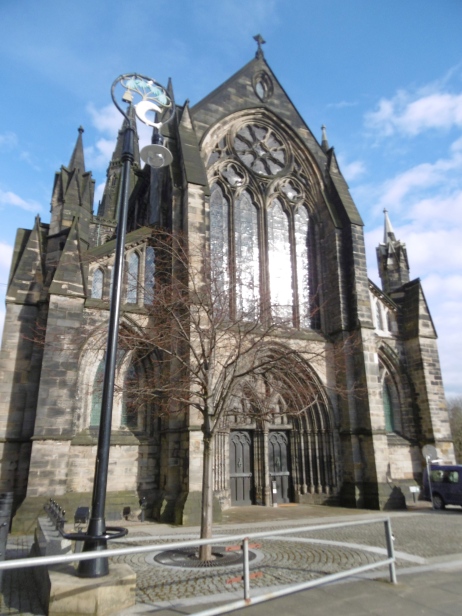 From the Mitchell Library on Sunday afternoon we took a taxi to Glasgow Cathedral where the sun was coming out at last and after a quick visit we took a walk around the famous Necropolis.

The Necropolis from the Cathedral

“The Necropolis has been described as a ‘unique representation of Victorian Glasgow, built when Glasgow was the second city of the Empire. It reflects the feeling of confidence and wealth and security of that time’. It is a memorial to the merchant patriarchs of the city and contains the remains of almost every eminent Glaswegian of its day. Monuments designed by leading architects including Alexander ‘The Greek’ Thomson, Bryce, Hamilton and Mackintosh adorn it. Their designs are executed by expert masons and sculptors who contributed ornate and sculptural detail of the finest quality“. It remains one of the most significant cemeteries in Europe.

Built into the side of a hill it’s quite a climb to the top to where the Knox Monument towers over all but there is lots of interest along the way. 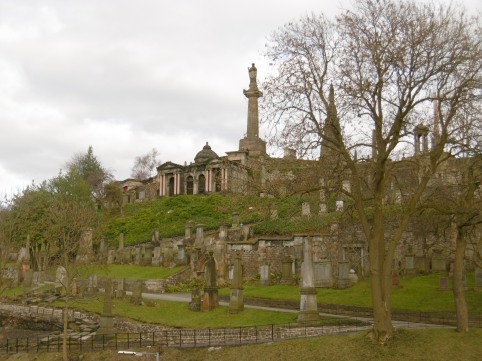 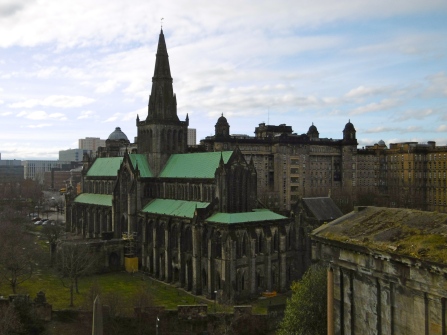 The Cathedral from the Necropolis 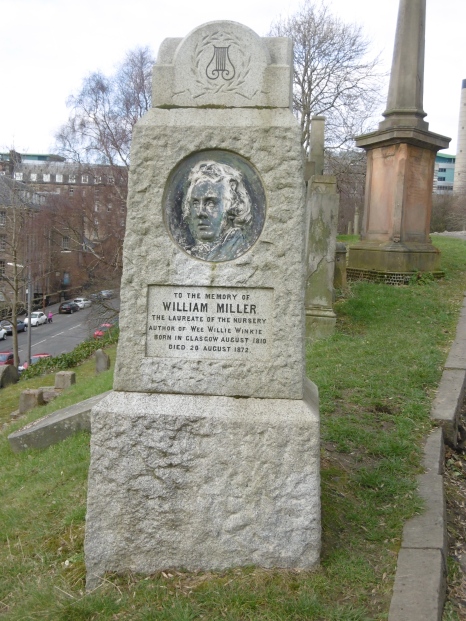 The Author of Wee Willie Winkie

And this is the end of the Remains of Glasgow.

4 comments on “Glasgow Weekend : The Remains”