Can it really be three years since some of us from the online book group met up on a summer’s day outside London? At least, it was in 2013 that I last posted about one. That was in Malvern and before that, in 2012, Chatsworth. This year it was the turn of Sissinghurst.

We’d been ‘planning’ to go for a couple of years and this year, I’m very pleased to say, it happened last week.

We usually report back to the group on our day and although I presented a basic ‘we did this and then we did that’ another member, Carol, one of our ‘Gardening Gurus’ wrote a splendid piece and has allowed me to copy and paste here with a few alterations, omissions and additions. After an introduction about our arrival, a spilt coffee and introducing Fran, who regularly comments here (Thank you, Fran) Carol writes (in italics) :

“We were immediately seduced by an imminent tour of the newish vegetable garden (well, I was and the others were happy to humour me). This was fascinating – they use the no-dig system advocated by one of my gardening gurus, Charles Dowding, and everything looked really healthy, neat and well grown, with the produce supplying the restaurant.”

We were also introduced to the organic methods and trial and error systems adopted by the gardeners of whom only two are paid staff and the rest volunteers. From the fruit and vegetable gardens there are beautiful views over the Kentish countryside.

Potting Shed on the Left and Greenhouse on the Right

The potting shed, greenhouse and poly tunnels were bought from Estate funds but otherwise the crops are cleaned, weighed, used by and charged to the Restaurant kitchen. 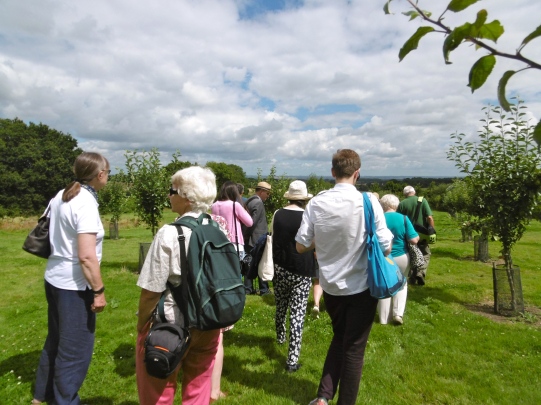 Walking through the Orchard : apple juice is “home made” and last year Sissinghurst Cider was brewed for the first time.

“This took us an hour and we were still not in the garden proper, but by then we were hungry so we returned to the restaurant for a hearty lunch before approaching the entrance with our green plastic ‘Sissinghurst shillings’ – a  token which proves you’ve paid to get in, reminiscent of the ‘Shilingses’, as Vita and Harold used to call their visitors when the garden first opened.”

“We were greeted by some wonderful wildflower meadow planting in the beds either side of the bronze Bagatelle urns given to Vita by her mother and then went through into the large space with the tower in front of us and the long range of buildings to either side of us.” 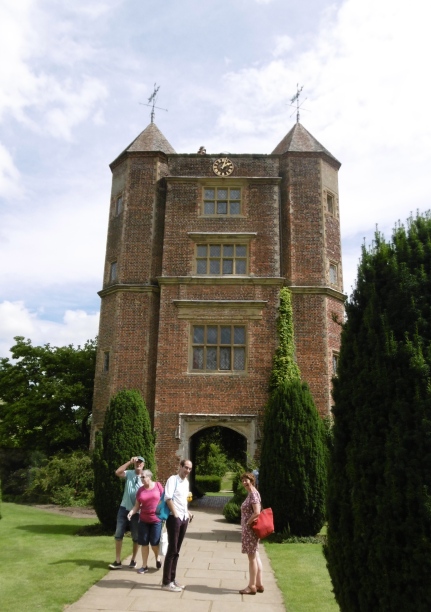 The Tower in front of us

The Garden through the Tower

Perhaps the July notes are also relevant to August!

“We headed first for the tower (OF COURSE!) and all climbed up to drink in the atmosphere of Vita’s tower room (I’m sure they’ve moved her desk as I think it was immediately visible from the door previously, whereas now it’s to one side). No indoor photography was permitted (although the shop didn’t have postcards of interior views either, which is a bit of a faux pas on the part of the National Trust). There was also a very atmospheric recording on continuous audio loop, of Vita reading from her poem Sissinghurst. It brought back once again how voices and vowel sounds have changed over the course of the years.”

I made a note of the recording details as I’d like to have heard it in full but a search on Youtube proved fruitless. If you find it please add a link in the comments. It is called ‘Walking through leaves’ and was recorded by the BBC and broadcast on the Home Service on 5 February 1950.

“The small but intense pleasure of walking through dry leaves and kicking them up as you go … they rustle, they bustle, they crackle …”

“The views from the very top of the tower in the wind were magnificent as we were blessed with a sunny, pretty clear day and gave wonderful views of the structure of the garden and buildings. On one of the walls was Harold’s modest opinion that this was all Vita’s work and his contribution had been just a ruler and piece of string – seeing the structure from up there we had to disagree.”

The Long Building/Castle from the Tower Roof

Gardens from the Tower Roof 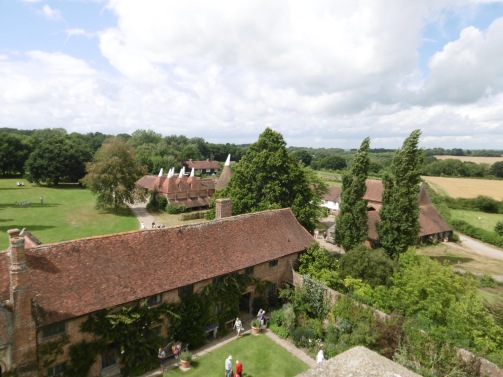 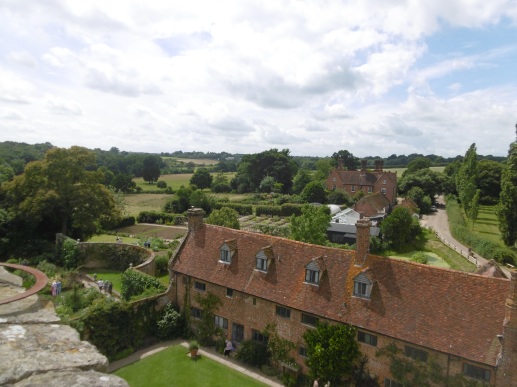 Propagation Area and Sissinghurst Castle Farmhouse Beyond the Castle

“We then went to the library, which had been the family’s ‘sitting room’! Simon was in his element and spotted at least one rare edition which he has been looking for without success. The de Laszlo portrait of Vita as a teenager has pride of place over the fireplace.

So, off to the garden and it was utterly magnificent. In contrast to Great Dixter, which I visited a fortnight ago for the umpteenth time, which had had that end of summer tired look, Sissinghurst looked fresh and lush. The new head gardener, Troy Scott-Smith, is gradually returning it to more of the ethos of Vita’s time, reintroducing some of her original plants, replacing the York stone with brick paths and general allowing the plants to grow more naturally, overflowing the paths if necessary. I thought there were clear signs of a new hand at work and long may he continue.”

The Tower from The White Garden (note the brick path)

“The white garden, always my favourite, while it didn’t have the magic of the central rose arbour as we were too late in the year, was bursting with clematis, agapanthus, cosmos, antirrhinum, hollyhocks, acanthus, Ammi visnaga, and many others. It was a triumph and must glow in the twilight. It called to mind Vita’s remark about seeing the white barn owl fly over it in the half light. Worth the trip for this alone.”

So, you see, like Vita Sackville West, Carol also is very aware of the “symbolic significance and literary associations of the plants.”

“Shortly after we returned to the tea room by the plant sales area for a cup of tea and a sit-down. This is where the obligatory National Trust secondhand book shop was located and Simon cleverly spotted two Simon-type books, while I found a book about English villages.” 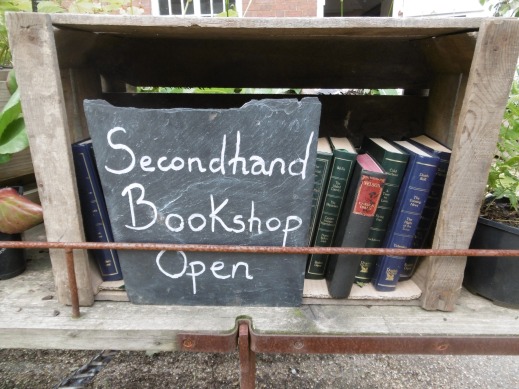 New Books in the NT Shop

“Deb, Simon and Barbara then said their farewells as they had long journeys (apparently the M25 was the usual nightmare), while Fran and I had time to return for more of the garden. We especially loved the hot garden around the South Cottage (or was it the Priest’s House – one of the two) where the hot late summer colours were at their best. Really clever planting combinations of yellows, oranges and dark browns had us oohing and aaahing for ages!”

“We finally trudged up to the exit at 5pm, just before the garden closed. Fran then drove us back to her home in Bexhill via some picturesque Kent  and Sussex lanes and villages, so that was a bonus for me. And a final note – for the first time ever, in Fran’s back garden on Thursday night, I saw the Space Station pass over. It seemed a fitting finale to a wonderful day.” 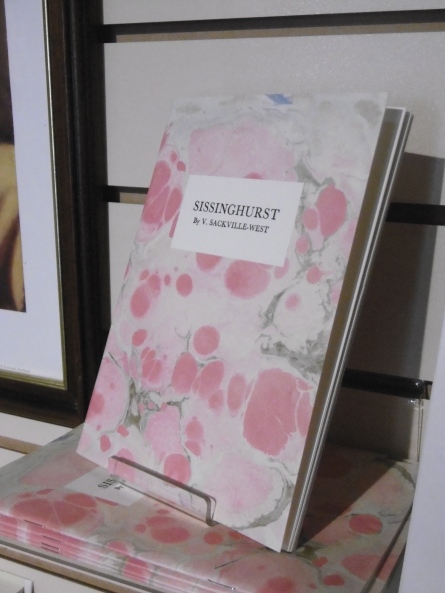 Thanks to Simon, Deb, Fran and especially Carol (for the above – I think my pictures fit in quite well with your commentary!) for a lovely day out in the Kentish countryside.

5 comments on ““We Have Done Our Best and Made A Garden Where None Was”* : Sissinghurst in Kent”