Can I really have been have jotting down notes about my travels and interspersing the notes with my photos for five years already? I’ve just been looking back at my post about Capability Brown at Harewood and am amazed to see that the date was October 2011. My first post was dated 20 August 2011. And I’m stunned to see that that was five years ago to the day! Well I never. 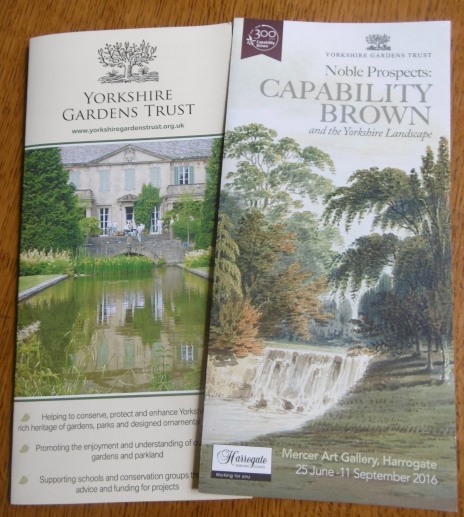 The Yorkshire Gardens Trust achieved something of a coup when a couple of years ago they requested the loan of Lancelot ‘Capability’ Brown’s portrait by Nathaniel Dance from the National Portrait Gallery. It is currently on display at The Mercer Gallery in Harrogate as part of the Noble Prospects exhibition celebrating Brown’s work here in Yorkshire during this 300th anniversary year of his birth.

“The great landscape gardener Lancelot ‘Capability’ Brown (1716-1783) changed the face of eighteenth century English parkland, creating a magical world of woods, water and swathes of green that lives on until this day in Yorkshire. […]

Capability Brown is the creator of some of Yorkshire’s most admired landscapes, which include Burton Constable, Harewood, Roche Abbey, Scampston, Sledmere and Temple Newsam. This unique exhibition brings together an intriguing collection of artworks, which reveal more about the designer and his designs. Drawn largely from Yorkshire collections the show features portraits of Capability Brown and his Yorkshire clients, original plans, drawings and documents by Brown, paintings of his creations as well as works of art that inspired his landscapes.

Capability Brown was the leading landscape designer of the second-half of the eighteenth century and there are thought to be 20 sites in Yorkshire associated with him. He rejected the very formal geometric French style of gardening and concentrated on echoing the natural undulations of the English landscape in his plans. The landscape garden is recognised as one of Britain’s greatest artistic achievements and the designs of Brown and his contemporaries have influenced gardens across the world.”

It’s a small exhibition in just two rooms as the rest of the Gallery has been given over to KATE WHITEFORD : False perspectives a specially commissioned work by the Gallery to complement the Brown Tercentenary show.

Karen Lynch’s excellent book, published to accompany the show (no photography allowed), includes reproductions of most, if not all, of the paintings, prints and plans on display interspersed by the beautiful, contemporary photographs by Simon Warner.

Beside the NPG portrait there is a large-scale (180cm x 140cm) Plan for the Intended Alterations at Temple Newsam, 1762, by Brown showing his ideas for the estate which never fully materialised. This has been beautifully conserved and the attention to detail and beautiful handwriting makes this a work of art by itself.

In addition Lady Irwin’s Pastoral Landscape (scroll down) by Claude Lorrain (1604 -5? – 1682) hangs nearby. Viscount and Viscountess Irwin of Temple Newsam bought the painting around the same time as Brown’s work began and writing to a friend she says she would gaze upon her “beauteous Claude where the scene always enchants me, the trees are green, the water placid and serene & the air has a warmth very comfortable” when outside was all mud and a “woful dirty pickle’.

An accompanying leaflet shows a map of locations of parks associated with Capability Brown and lists altogether 14  where he was definitely involved and a further 9 traditionally associated with him but where no evidence has been found.

4 comments on “Noble Prospects : Capability Brown and the Yorkshire Landscape”