As I’d decided to spend most of the day at The Hermitage I bought the full price ticket (no reductions for pensioners!) and after a tasty lunch of pumpkin soup and apple pie I headed for the other show. There’s no permanent collection, as far as I understand but the Golden Age portraits are showing for an extended period.

“ABOUT THE EXHIBITION
Thirty enormous 17th century group portraits from the collections of the Amsterdam Museum and the Rijksmuseum have been brought together for the first time and will be on display in the Hermitage Amsterdam. These “brothers and sisters” of the Night Watch are unique in the world and rarely seen due to their size. They show us regents, archers and merchants from all different classes, backgrounds and religions, standing shoulder to shoulder like brothers.

Together they illustrate the story of the collective citizenship that is so typical of the Netherlands. They serve as a reflection for us, because the relationship they had back then forms the basis for our modern-day standards and social interaction. Would you like to know why the Dutch attach so much importance to freedom and equality? The answer is hanging – in life-size form – on the wall of the Hermitage Amsterdam.

COLLABORATION
Portrait Gallery of the Golden Age is a collaboration between the Amsterdam Museum, the Hermitage Amsterdam and the Rijksmuseum.”

I found this display almost overwhelming! I could hardly believe the size of the paintings and they all looked alike but different. Here is the main gallery display where every 15 minutes a sound and light show takes place. 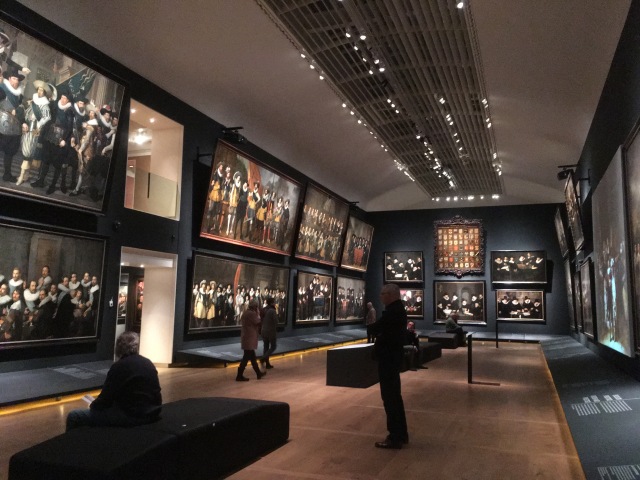 “They are ready for battle, these members of the Amsterdam Calivermen’s Guild. Some lean on their muskets. The inscriptions are a quotation from Seneca which, simply put, they mean ‘surrender to fate’.” Civic guardsmen of Squad A of the Arquebusier Civic Guards, 1531; by Cornelis Anthonisz.

Love this painting : Seventeen Men and One Heron. Once a year members of the Civic Guard Companies meet to eat, drink and sing. These men belong to the Crossbow men’s guild. The words of the song ‘I have my eye on the girl’ are written on the piece of paper. It seems unlikely that they will eat their fill as there is just one goose and one heron on the menu!

And lots more of the same (or very similar). 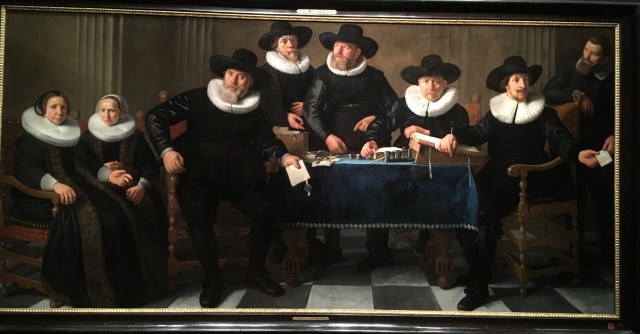 Besides the civic guard, there is another group of citizens who act out of enlightened self-interest: they are the governors of the many institutions that provide a social safety-net for the poor, the sick, orphans and the elderly. Care is well-organized in Holland, because social unrest is bad for the economy. These ‘regents’ and ‘regentesses’ come from the prosperous upper echelons of society and serve unpaid out of a sense of duty and for the prestige. Their portraits radiate prestige. So even women played their part!

Finally, there were a few rooms illustrating background to this major display – city scenes, a recently rediscovered Rembrandt and scenes of daily life. 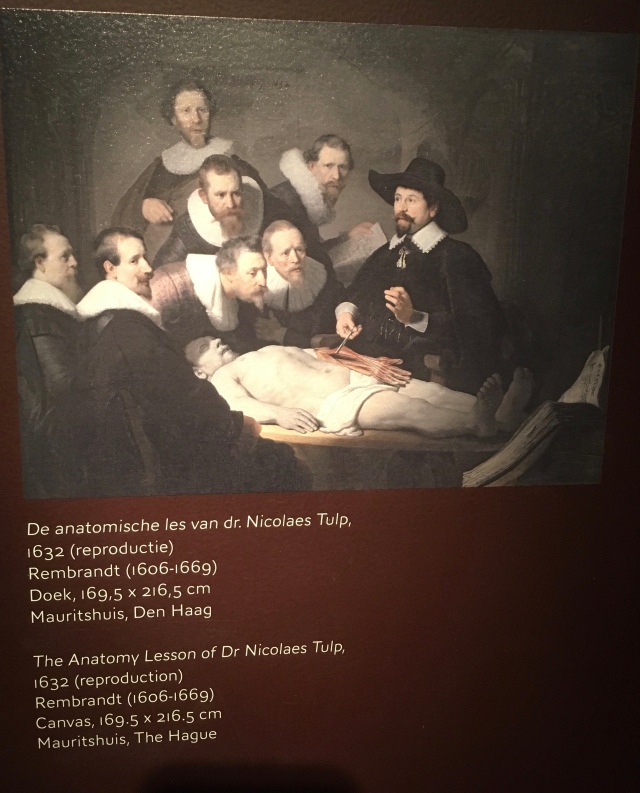 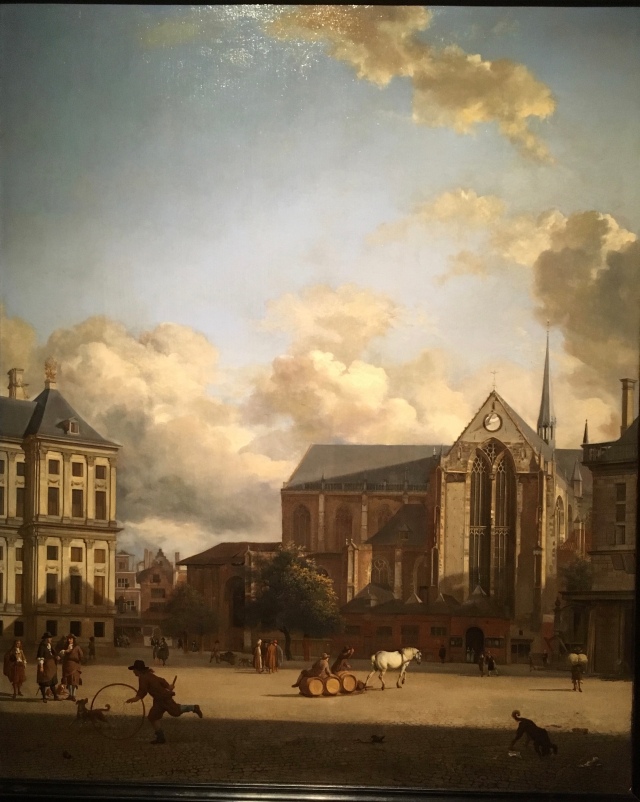 Winter Scene on the Ij near Amsterdam

4 comments on “Portrait Gallery of the Golden Age, Hermitage Amsterdam”