… And one of the oldest living things in the world! I don’t know why we don’t all know about this phenomenon. From The Pulpit Yew we drove on to the village of Llangernyw in order to find this ancient yew – more than 4,000 years old. 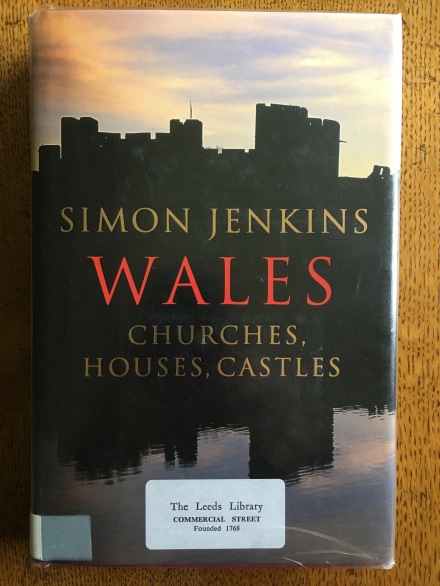 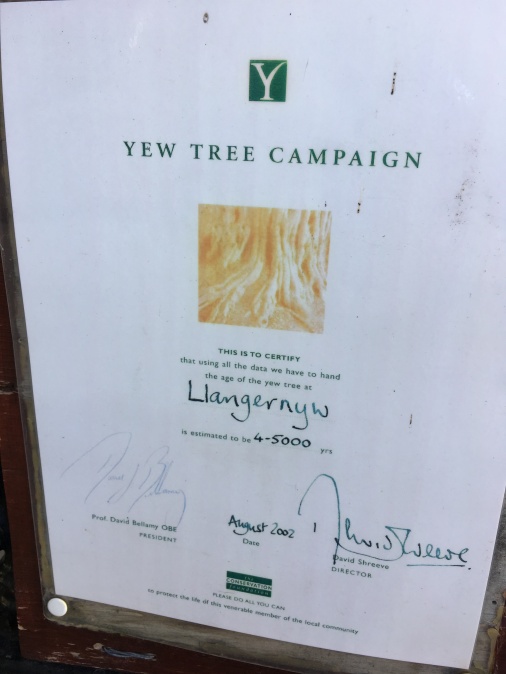 “Estimated to be up to 4,000 years old, this huge yew is the oldest tree in Wales. As with many ancient yews, its trunk has split into several parts, joined only by a thin strip of bark. The tree’s current girth (“Heritage Trees” was published in 2004) has been measured at 36 feet (11m).

It stands in the small churchyard of St Digain’s … Despite its huge size and age, the tree somehow remained unnoticed by previous natural historians. Unexpectedly, this remarkable yew tree was ‘discovered’ in 1995, by Jon Stokes (one of the authors of the book) and his colleague Kevin Hand, during a training day for Tree Wardens in the former county of Clwyd.

At the time there was a large oil tank in the centre of the hollow stem. The Tree Council arranged for the tank to be removed in order to protect the tree, as part of the 1995 National Tree Week celebrations. A memorial stone to celebrate this “Green Monument” was erected in the churchyard and unveiled on 25th November 1995. 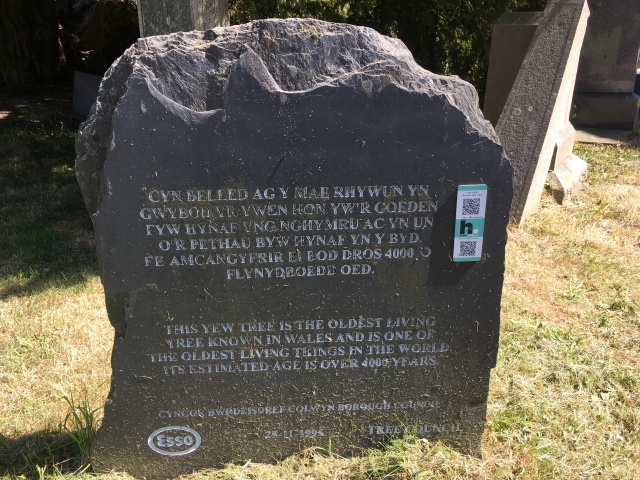 Since its discovery the Llangernyw Yew has brought many visitors to this quiet Welsh village.” [Extracted from “The Heritage Trees of Britain and Northern Ireland” by Jon Stokes and Donald Rodger] 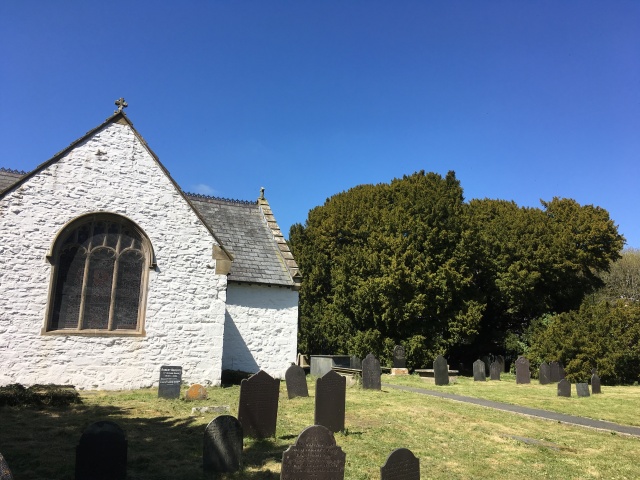 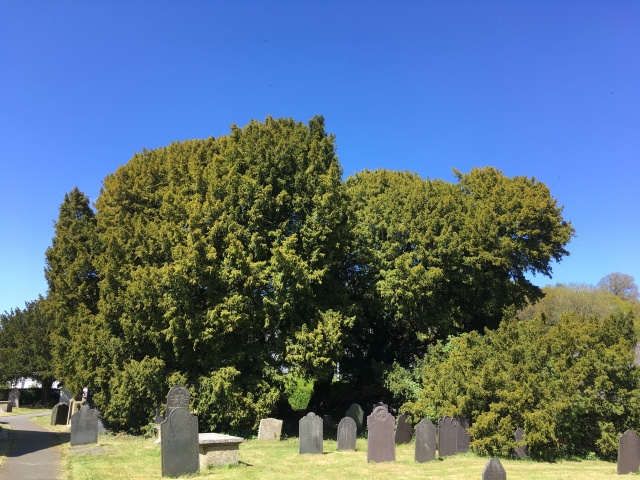 Besides this remarkable tree the church is also noted for its excellent 19th century glass including a window dedicated to Margaret Sandbach who died of breast cancer. The window features the four virtues with Margaret on the left with her hands across her chest. 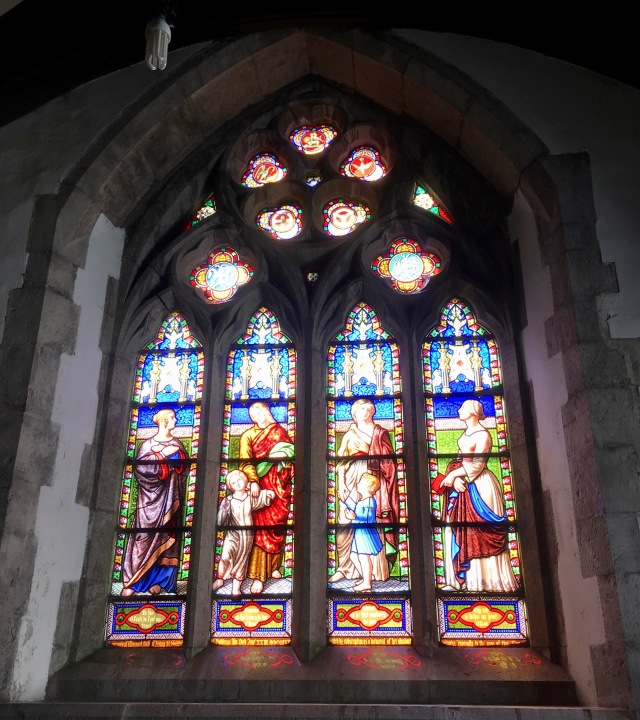 I learnt the following from an information board in the church.

Margaret Sandbach (1812 – 1852) has been described as a ‘lost heroine of the Victorian age’. She published several volumes of poetry, many of which were inspired by her friend the sculptor John Gibson. Margaret was Gibson’s patron and she was his muse. They had an intense and complicated friendship, which tragically ended when Margaret died of breast cancer at the age of 40. Gibson was deeply affected by Margaret’s death. In his grief he sculpted a beautiful monument to her which is on display in the Walker Art Gallery, Liverpool.

All the Harmony and beauty; Of the Poet’s soul are here; His, who wandered o’er life’s ocean; With the Ancient Mariniere     [From Aurora by Margaret Sandbach]

Outside in the graveyard, on the south side, are two incised standing stones, the apparent survivors of a prehistoric stone circle which, Simon Jenkins suggests, ‘church builders dared not remove’. 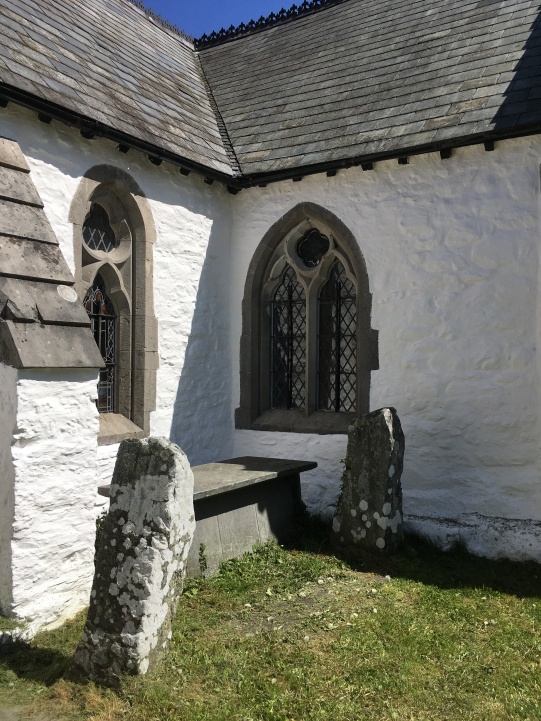 5 comments on “The Llangernyw Yew : The Oldest Tree in Wales and a Forgotten Poet”