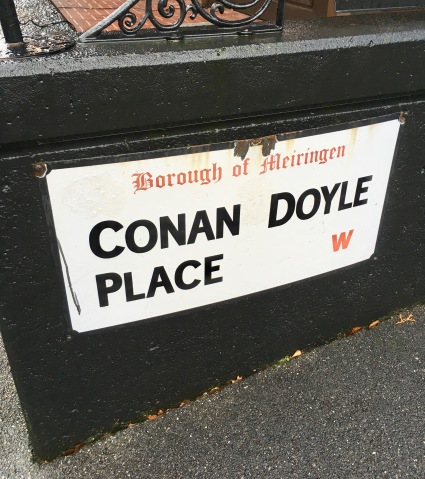 There  are probably other places in the world that have a claim to fame not from being the birthplace of a famous author but from being the location of the death of a character of fiction. But the ‘Borough’ of Meiringen in the Bernese Alps, as well as being the birthplace of the meringue, is also well-known throughout the world as the location of the dramatic ‘death’ of fictional English sleuth Sherlock Holmes, maybe the most famous. The Sherlock Holmes Museum is housed in the former English Church right opposite my hotel. 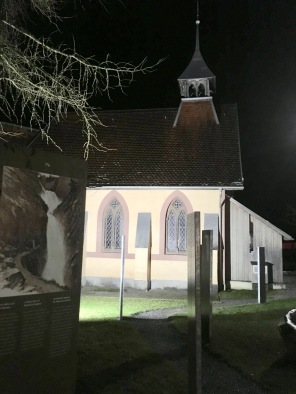 My friends and I had hoped to take a cable car and thence a walk in the mountains but with winds and rain this was not possible so we stayed down in the valley and, after a jolly fondue lunch, during the afternoon made a visit to the Museum. 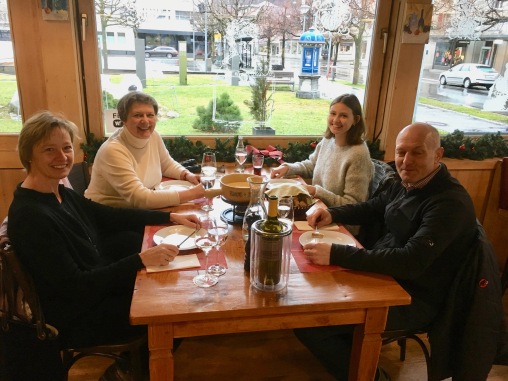 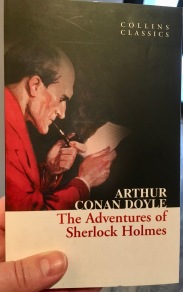 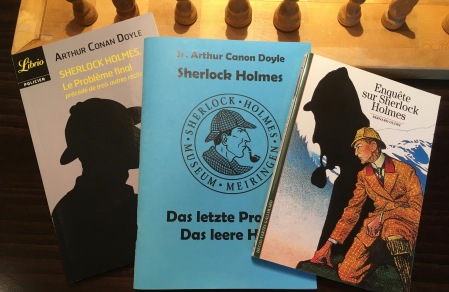 Years ago in the dim and distant nineteen seventies I spent the summer working at an hotel on Hasliberg. It’s a sunny mountain ‘ledge’ with a string of pretty houses, hamlets and hotels above the large village of Meiringen. It was on my first visit to Meiringen that I came across a mention of its connection with Sherlock Holmes and his ‘death’ at the now famous Reichenbach Falls nearby. I visited them too that summer. Sir Arthur Conan Doyle had visited the village and stayed at the neighbouring hotel to mine : now The Parkhotel Du Sauvage. These days the Holmes connection is ‘biggish’ business in Meiringen with a Museum, a Sherlock Holmes Hotel and some renamed place names. But such was the outcry at the death from Doyle’s reading public that Doyle felt obliged to ‘resurrect’ Holmes to live another day and solve another crime in the story “The Adventure of the Empty House”. Because of the Meiringen connection I’ve read both books but many years ago now.

Inside the English Church

The Hotel Au Sauvage next door to the English Church

The small museum devoted to the fictional detective is very well done. We were issued with an audio in our relevant languages and the visit began with some background information to the story in the main body of the former English Church. 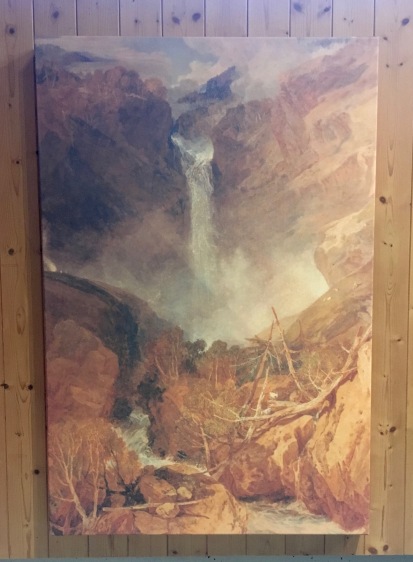 Reproduction of Turner’s The Great Falls of the Reichenbach which hangs in the Higgins Gallery, Bedford

“One of the highlights of Bedford’s Turner collection is The Great Falls of the Reichenbach, painted in 1804. At over a metre tall it is a spectacular exhibition watercolour and a technical tour de force; Turner had by this point in his career broken free of traditional methods. Working on a large scale allowed him to depict the soaring perspectives he had witnessed on his tour of Switzerland in 1802. The Reichenbach Falls are the scene of the ‘final showdown’ between Sherlock Holmes and his nemesis, Moriarty. The painting has developed added significance in recent years, appearing in the BBC series Sherlock and recently returning from the Museum of London, where it was the final exhibit in their blockbuster exhibition Sherlock Holmes – The Man Who Never Lived and Will Never Die.”

The story continued down the stairs to 4 vitrines each devoted to some aspect of the lives of Holmes and Watson in their London context.

“Blackheath was the fictional club of Dr John H Watson, the famous sidekick to Sherlock Holmes although author Sir Arthur Conan Doyle is rather vague about the connections, mentioning his Blackheath career just briefly in The Adventure of the Sussex Vampire.” [source]

The piece de resistance in the last room is a very effective complete reconstruction of Holmes’s sitting room at 221b Baker Street as it may have looked in the 1890s.  This authentic reconstruction was put together using references from the novels and The Strand Magazine. Many of the objects around the room would be recognisable to any Holmes fan including the famous Stradivarius violin. 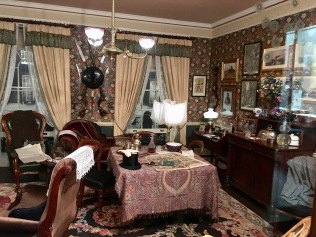 Deer stalkers for sale in the shop