Yesterday one of my teeth broke whilst eating lunch with my friend Barbara in Bern. She made an appointment for me to visit a dentist in Lucerne this afternoon. It’s a lovely journey from Meiringen on a train with picture windows which winds its way up and over the Brünig Pass out of the Bernese Alps region and into Central Switzerland. 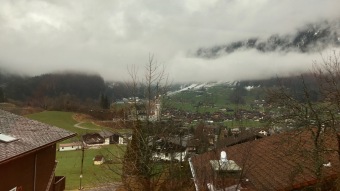 The train passes through country familiar to me. In 1975 I worked one summer long at a family hotel in the village of Lungern and spent a lot of my days off travelling on this very route. In those days there was a longish wait at Meiringen and at Giswil while the trains were fitted with cog wheels (or pinions) that mesh with the rack rail allowing the trains to operate on steep grades of around 7 to 10%. (This technical information adapted from the Wikipedia article).

Lake Sarnen from the train

On arrival in Lucerne my first port of call was the lakeside quay in the hope of joining a short cruise on the lake, as the weather was much improved after several days of rain since I arrived in Switzerland. I had just missed the lunch cruise and the next opportunity would not have had me back at Lucerne in time for the dental appointment.

So instead I made my way to The Rosengart Collection very near the railway station and the dentist’s surgery. 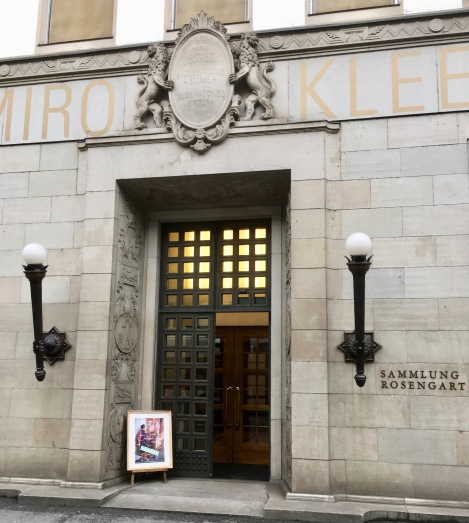 The Rosengart Collection is housed in the beautifully converted former National Bank of Switzerland. The whole collection is the amazingly generous gift of Angela Rosengart to the city of Lucerne. All the works of art came from the walls of her home and here is a brief interview with her where she explains how the “gallery” came about.

There is a much longer film showing on a loop in the former bank meeting room and watching this I realised that really, although I liked some of the pictures, it was the people, especially Angela herself, that were more interesting to me.

Of course, photography is not allowed; but the Rosengart website has a section on Artists and this includes my three favourites from the collection : Georges Braque, The Program (Tivoli Cinema), 1913; Fernand Léger, Contrast of Forms, 1913 and Max Liebermann, Front Garden of the Villa at Wannsee, Berlin, 1929. Follow this link to see these and browse through further highlights.

327 works spread over 3 floors; about 130 works by Pablo Picasso; 125 works by Paul Klee (hung in the basement rooms in chronological order of creation and including the very first work that Angela bought from her first year’s pay : X-chen – it is highlighted in the film). Angela and her father became great friends with Pablo Picasso and Marc Chagall.

What a gem to be found in an austere former Swiss bank building.

By the way – tooth successfully temporarily filled so a very a good day all round.