The Hepworth Gallery by the River Calder in Wakefield

On Thursday I revisited The Hepworth Gallery in Wakefield. I went back specifically to see the Matthew Darbyshire installation of pots juxtaposed with modern white goods in Gallery 10. Unfortunately this exhibition closes today but the pots, which belong to the York Art Gallery collection, will be back in a special new gallery to be created at York when the museum reopens in 2015.

With my new-found appreciation of studio pottery I was looking forward to seeing this exhibition. I was not disappointed.

“This fascinating project brings together one of Britain’s most exciting contemporary artists, Matthew Darbyshire, with one of the world’s most significant assemblages of post-war studio pottery, the W.A. Ismay Collection.

Librarian and collector William Alfred Ismay (1910-2001) lived in Wakefield his whole life. From 1955 he began to collect pieces by some of the most renowned makers of studio pottery from Hans Coper and Shoji Hamada to works by local Yorkshire potters, Barbara Cass and Joan Hotchin, alongside lesser known ceramicists.

Contemporary installation artist Matthew Darbyshire assembled the display based on the floor plan and the furniture or kind of furniture that Ismay would have owned in his Wakefield terraced home; he added modern streamlined household white goods as a contrast to the handmade ceramics and he used just 700 of the total of 3,600 pots from Ismay’s collection. In addition a flat screen TV shows a loop of original motion picture clips that Darbyshire has put together on the themes of man and machines and dance including hip-hop and other natural human movement contrasting the manmade with machines and technology.

And here is my selection of pots (mostly teapots) : 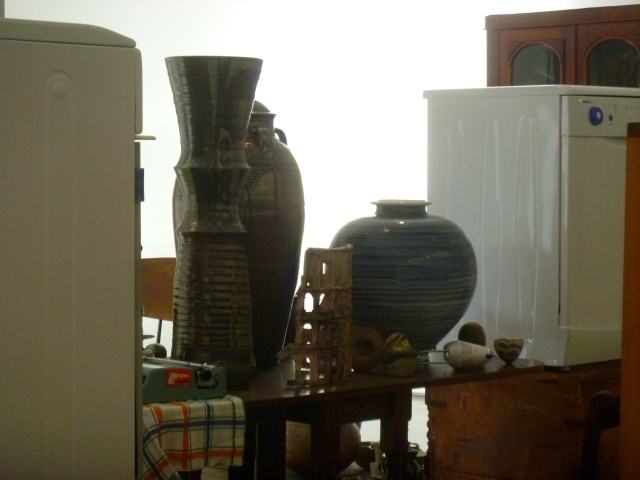 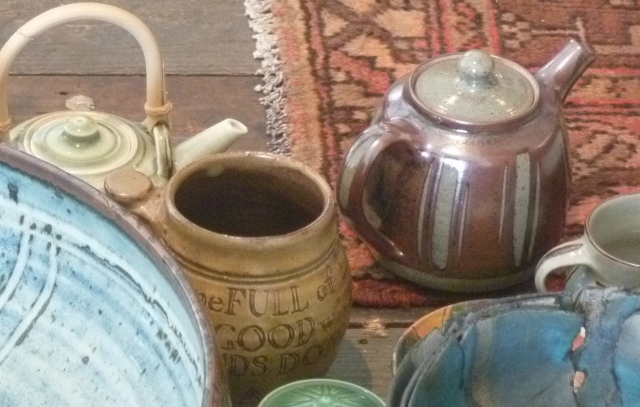 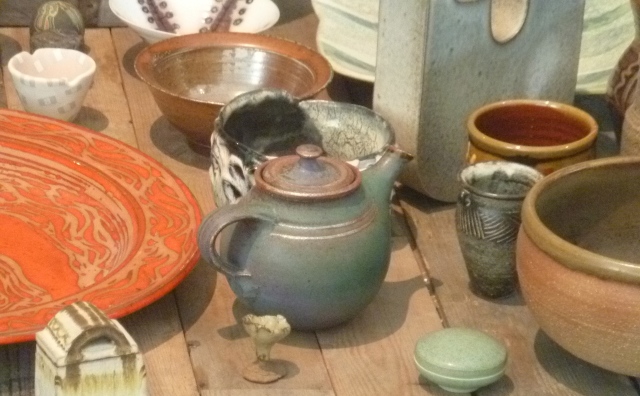 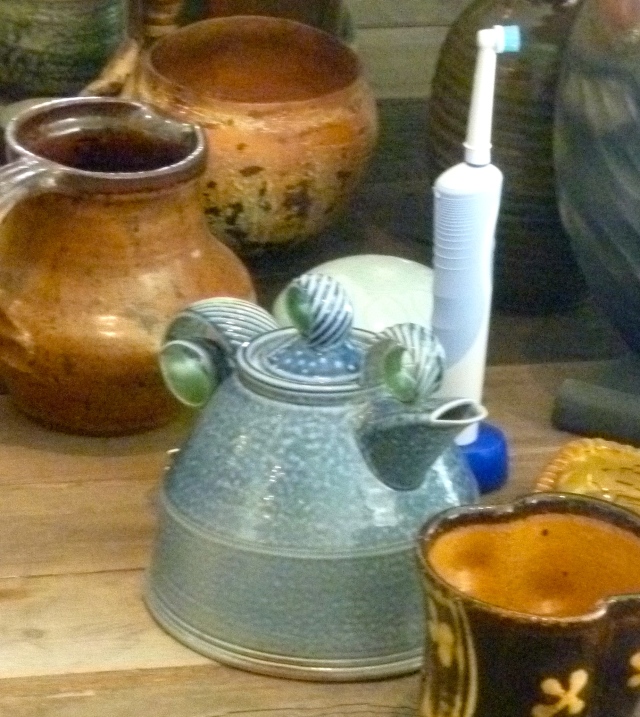 Viewing the pots made you really want to pick them up so luckily there was a small selection of pots that you were allowed to feel and examine and another TV loop of potters talking about their first meetings with Bill Ismay.

You may pick up these pots

See how Matthew Darbyshire put it all together here :

And here is Down By The Dougie’s view of “Lots of Pots” and more photos.

Family of Man by Barbara Hepworth outside The Hepworth, Wakefield

After spending some time admiring the Tissot display I decided to move on and see what else the Gallery had on show this autumn beside the spaces devoted to Barbara Hepworth herself.

I found another display centred on works from The Wakefield Art Collection – In Focus : Albert Wainwright. Wainwright was born in nearby Castleford in 1898. At the time of writing, the link to his display at The Hepworth tells you about a different so artist so here is something about him.

“From his school days he was a friend of Henry Moore, who became world famous as a sculptor. Albert’s life was not a long one (he was only 45 when he died) and he never became famous like his friend, but it is easy to see from his work that he was a talented artist with a colourful imagination and a strong personal style. Throughout his life he designed programmes, stage sets and costumes for the theatre and an impressive range of this work is now in the collection at The Hepworth Wakefield.

Over 30 years Albert created a number of sketchbooks which record his travels abroad and parts of his life, such as his time with the Flying Corps in the First World War.”

I particularly liked the travel ‘journals’ or sketchbooks which he made on his trips to Germany. 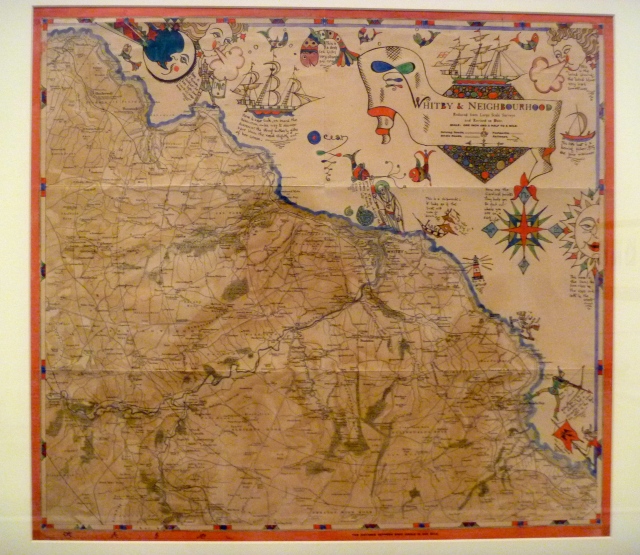 His Map of Whitby

“The Wainwright faamily took a summer home at Robin Hood’s Bay during the 1930s. Visits to the bay became an annual occasion for the Wainwrights, who became part of the close-knit community there. Wainwright made a modest income from painting his fellow holidaymakers and their families. In this picture all are imaginary except a self-portrait of the artist centre left, wearing glasses and carrying a walking stick.” [Picture notes] 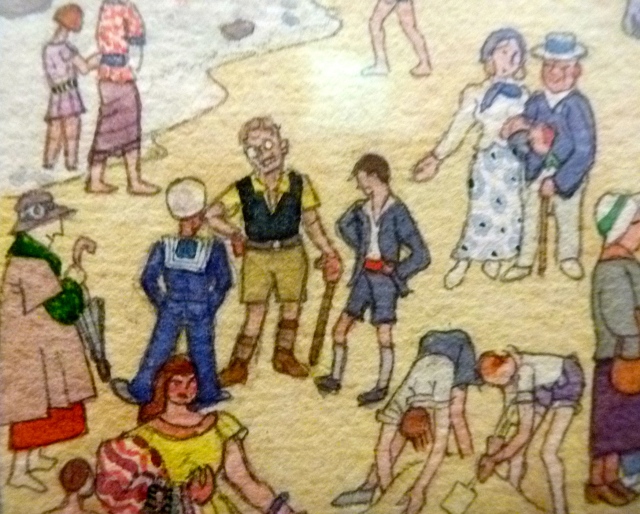 This painting depicts the view from the window (possibly his studio) of Bramley Cottage at Robin Hood’s Bay. “The placement of the book on the table “Strange Brother” written 1931 by Blair Niles, is significant because it provides an early and objective documentation of homosexual issues in 1920s New York, and is a deliberate allusion to Wainwright’s own sexual identity.” [Picture notes]

There is a selection of books on a table for visitors to look at including a reprinted copy of “Strange Brother“.

Approaching The Hepworth over The Aire and Calder Navigation

It was a miserable, grey, wet day last Wednesday and after my usual Nordic Walking session I decided to take a trip to Wakefield and revisit The Hepworth. Back in March I clipped a review of the Tissot exhibition from the Weekend Financial Times, Visual Arts section. Reading the review and knowing Tissot to be a Victorian artist I was intrigued that he should be showing at such a modern and avant-garde gallery as The Hepworth. The answer, as I found out upon enquiry to a steward, is simply that the Wakefield City Art Collection is also housed at The Hepworth and this show is based around pictures in the collection.

From the Tissot Exhibition webpage: 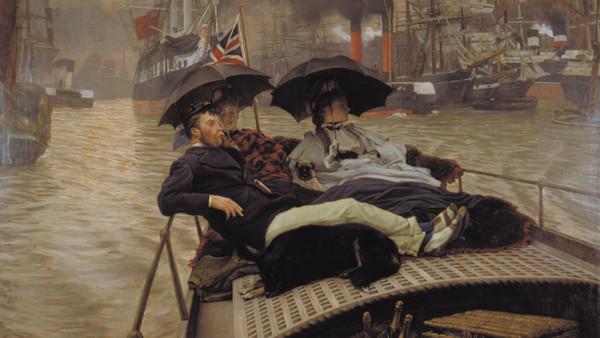 “Taking the much cherished painting On the Thames, 1876, from our collection as a starting point, this new collection display explores the representation of women in the work of French born artist, James Tissot (1836-1902).

The display will also feature loans from Tate and several regional art galleries, and will discuss the portrayal of Victorian femininity in relation to Tissot’s life-history and the contrasting roles of women in the region’s coal industry.”

Subtitled “How happy I could be with either” the painting caused a scandal when it was exhibited at The Royal Academy.

Other paintings in this small single room show include: 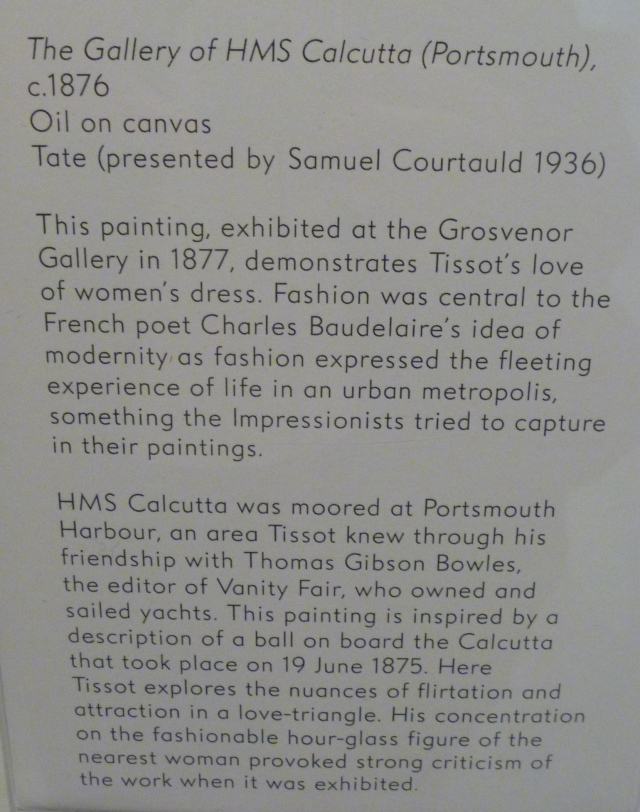 The exhibition looks at the representation of women in Victorian England through two contrasting sets of images: the fashionable women of James Tissot’s society paintings (above) and photographs of female workers in northern coalfields (not so easy to photograph in the display cases). Costume was a key element in Tissot’s work. He was born in the French port of Nantes where both his parents worked in the fashion and textile industry.

The painting “On the Thames” was originally owned by Kaye Knowles whose wealth came from his family’s Lancashire based colliery business. The Lancashire “pit brow lass” was mostly associated with the Wigan coalfields where women worked at the pit head. Their costume was also central to the pictures since there are wearing trousers which in Victorian times were perceived as a threat  to the moral and social order.

I see from the press that another exhibition featuring James Abbot McNeil Whistler’s London and the River Thames has just opened at the Dulwich Picture Gallery in south London. I wonder whether I shall manage to get to see it before it closes on January 12th 2014?