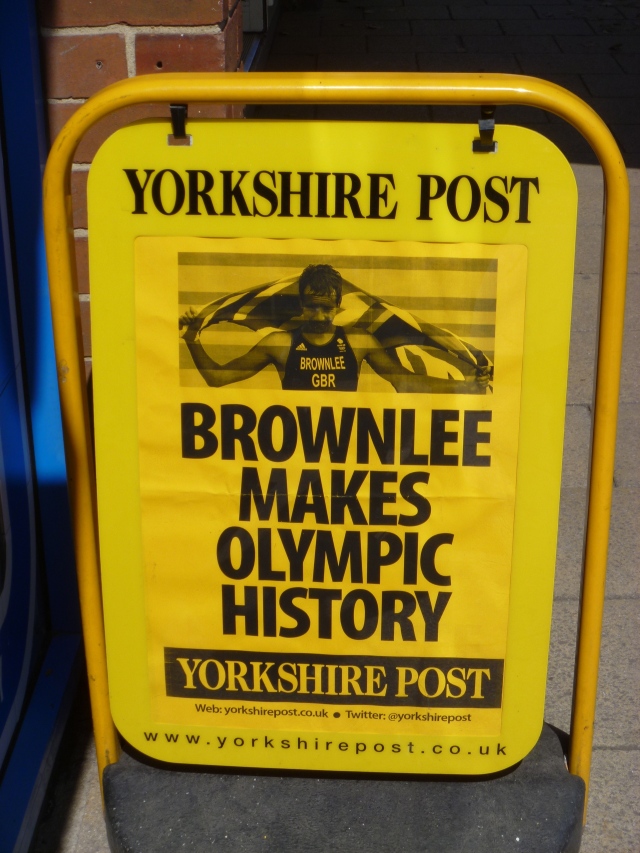 Read All About It! Read all about it!

The Golden Post Box on New Road Side Horsforth

Yesterday I was in Morecambe. I planned the trip a few weeks ago not realising that the 2012 London Olympics Men’s Triathlon was to take place from 11.30 on that very day. I missed seeing the race in its entirety, there was no public TV at the hotel (we did ask), but I received the good news by text almost instantly from a friend, followed by several others, whilst lunching at The Midland Hotel.

What we wanted to hear was that one of the brothers had won gold and the other silver. In fact the result was Alistair Brownlee – Gold and his brother Jonathan – Bronze. A superb effort and result nonetheless.

Alistair and Jonathan now live in Bramhope having moved there from nearby Horsforth. Both boys attended Bradford Grammar School where, along with my own two sons, they were keen members of the Cross Country Team. Sometimes we would share lifts to and from the school cross country coach on a Saturday.

Every Sunday I drive through the village of Bramhope and for the last several months have noticed the street decorations for the Queen’s Diamond Jubilee which have stayed in place for the London Olympic Games. Two Sundays ago I remembered to take my camera with me and stopped to take a snap of the decorated village signpost. As I walked around trying to find the best angle my eye fell on two cyclists who had stopped outside the village shop. Two cyclists in Bramhope? Surely they must be Alistair and Jonny so I wandered over to say ‘hello’ and wish them good luck. We had a chat and I’m sorry I didn’t think to take a photo of them. You can just see a white cycle helmet behind the display in the picture below. That is Alistair.

Well done, boys! You have done Yorkshire and Britain proud. And Good Luck in the future.

I leave you with one further comment. Yesterday, after Alistair’s win, the medals table showed the county of Yorkshire in 10th position!

4 comments on “The Brownlee Brothers of Bramhope”