St Germanus Church (the teepee is part of the festival!)

Last Sunday, the final day of the Port Eliot Festival 2014, my train was not due to arrive at St Germans until 11.29. Lynne was scheduled to speak with our first author of the day Peter Benson (“The Farm” and “The Valley”) at 11am. So when I arrived I made straight for the church. Sunday was the only day on which it was open and I joined the last 20 minutes of the local parish Service. I had read great things about this church. It achieves three stars in my Simon Jenkins “Bible” – England’s 1000 Best Churches; its description runs to 5 pages in Pevsner’s Cornwall  and I read an article about just one of its monuments in Country Life earlier this year.

Peter Beacham, who updated the Pevsner Guide to Cornwall (published in May this year), was one of the guests in the Dovegreyreader Tent last Sunday.

But back to St Germanus itself. My heading is taken from the Country Life article which I have been unable to find a link to so will copy out here.

My picture doesn’t do justice to the monument

“Set in the base of the north-west tower of the former priory church in St Germans, Cornwall, is the large monument to the MP and landowner who died at the age of 38, in 1722. It was commissioned by his widow and is enclosed by a fine iron railing. The monument is one of the earliest English works of the brilliant Antwerp-born sculptor John Michael Rysbrack, who settled in London in 1720.

With its obelisk and animated figures, it is ultimately inspired by Roman Baroque example. It could have been designed by the architect James Gibbs, an early associate of Rysbrack in England, who trained in Rome.

The subtle lighting of the space in which the monument stands sets off its carefully arranged constituent marble – white, veined-grey and dark-grey – to superb effect. Eliot, in Roman armour, stares upwards, with a mourning figure at his feet. On the obelisk is a roundel portrait – presumably his deceased first wife – supported by cherubs.

The relative simplicity of the architectural elements focuses the visitor’s attention on the interrelationship of the different figures that is suggested by their gestures and lines of sight. Busy drapery also adds to the illusion of movement and life that Baroque artists struggled so hard to capture.”

Text of the description attached to the monument 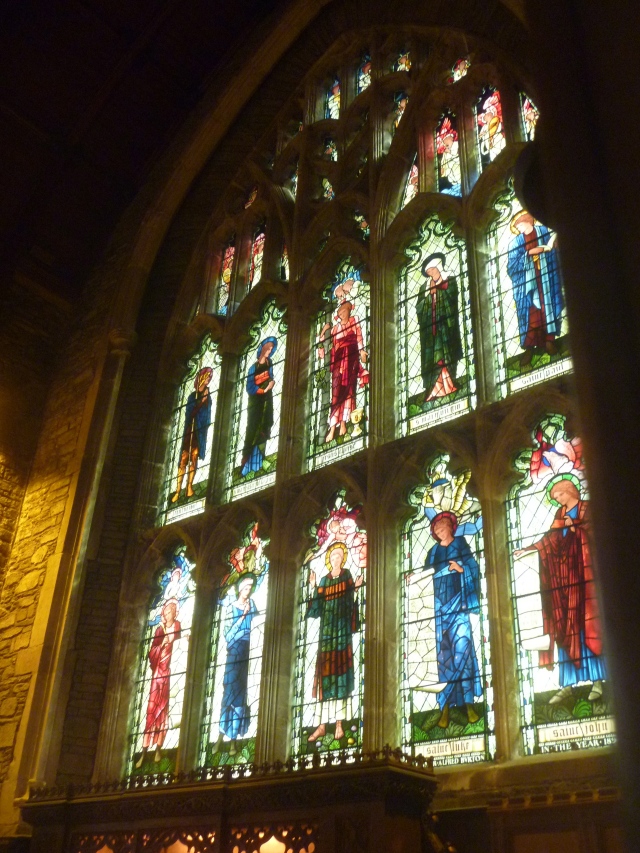 “The east window is a Burne-Jones masterpiece, a ten-light composition in his most mature style. The background is soft green-yellow, leaving figures in red and blue to glow even more vividly in half-light. Burne-Jones also designed a window in the south wall of the aisle.” Representing Joy, Justice, Faith, Hope, Charity and Praise

As Peter Beacham expresses it at the beginning of the St German’s section of Pevsner’s Cornwall “The memorably picturesque ensemble of church, house and park is of the highest architectural and historic interest“. I wonder what the Anglo-Saxon Bishops responsible for the creation of St German’s Priory would have said if they had seen last weekend’s picturesque ensemble of tents and stalls scattered over the estate.