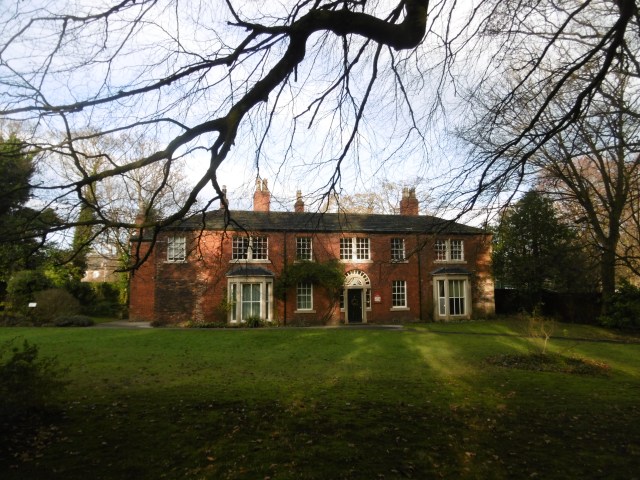 Sadly, I have to report that The Red House Museum in Gomersal closed its doors for the last time today. I last visited this former home Mary Taylor, a dear friend of Charlotte Brontë, in July for a History Wardrobe performance and I have visited very many times in the past. We signed the petition but to no avail.

I only learned about the closure when I arrived home on Saturday and found in the pile of mail waiting for me an Events leaflet from Kirklees museums and galleries. So, yesterday I visited the Museum for the last time. 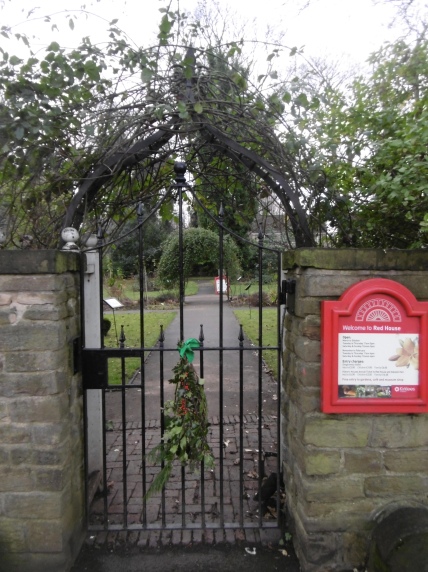 Arriving at The Red House 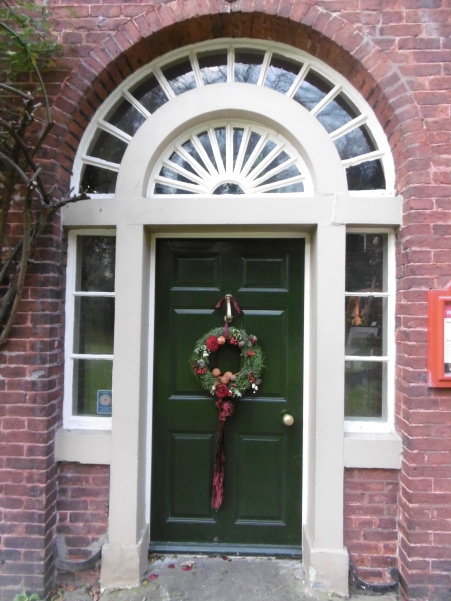 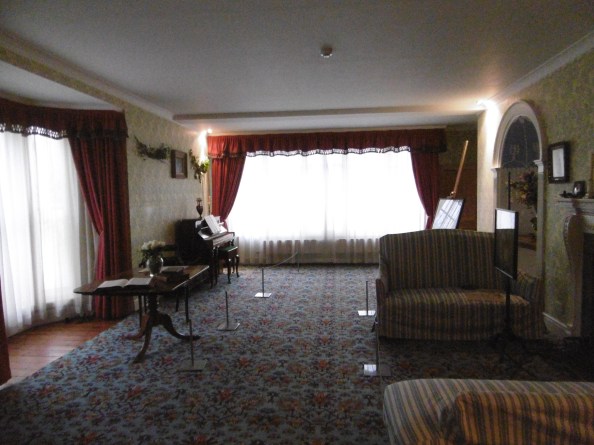 “… they were conducted to a large parlour, with a magnificent fire in the grate; the most cheerful of rooms it appeared as a whole, and when you came to examine details, the enlivening effect was not diminished. There was no splendour, but there was taste everywhere, unusual taste, the taste, you would have said, of a travelled man, a scholar, and a gentleman.”  [Shirley, by Charlotte Brontë. Ch. 3] 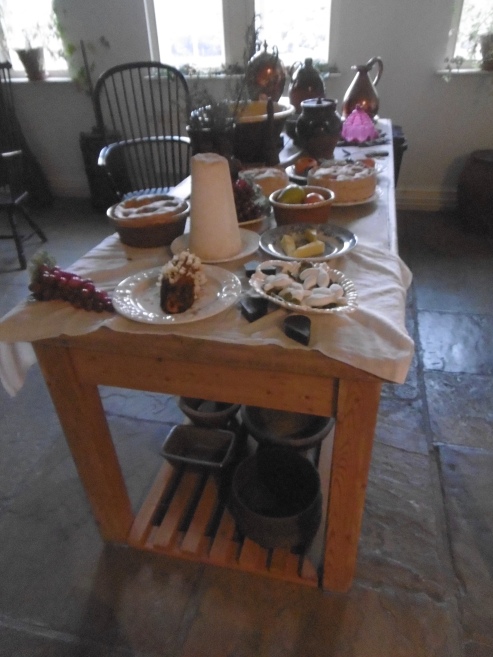 “The servants were in the kitchen, breakfasting solemnly with closed doors; his mother and Miss Moore were airing themselves on the lawn, and discussing the closed doors aforesaid: Martin, safe in the larder, made fastidious selection from its stores. … There was store of rosy apples laid in straw upon a shelf; … There was pastry upon a dish; he selected an apricot-puff and a damson tart. … he surveyed with favour some currant tea-cakes … Thanks to his clasp-knife, he was able to appropriate a wing of fowl and a slice of ham; a cantlet of cold custard-pudding he thought would harmonise ... ” [Shirley, by Charlotte Brontë. Ch. 33] 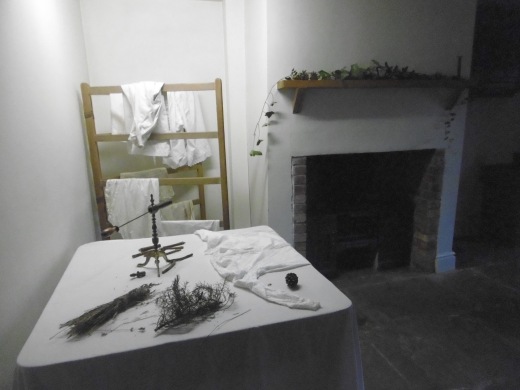 “ … it is washing day, and the maids are over the crown of the head in soap-suds in the back-kitchen;” [Shirley, by Charlotte Brontë. Ch. 33] 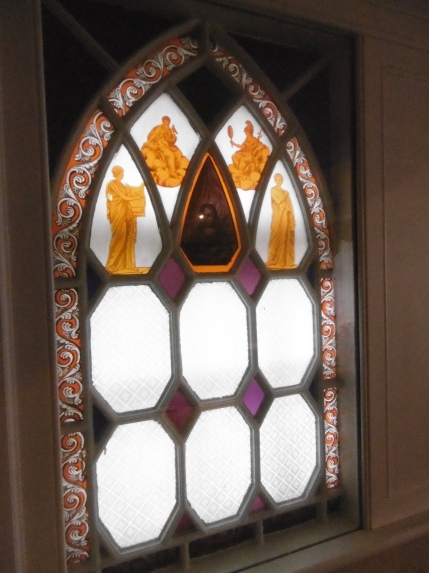 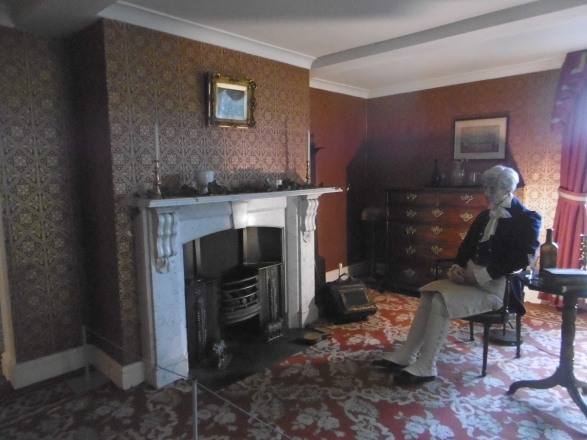 ‘Mr Taylor’ in his Study 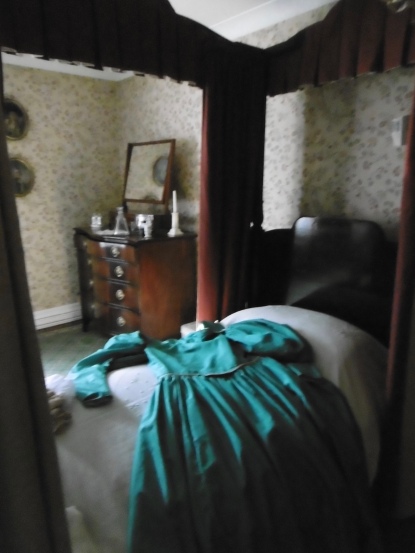 One of the Bedrooms 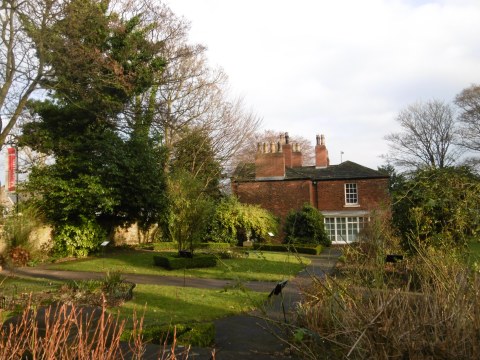 The Garden in December 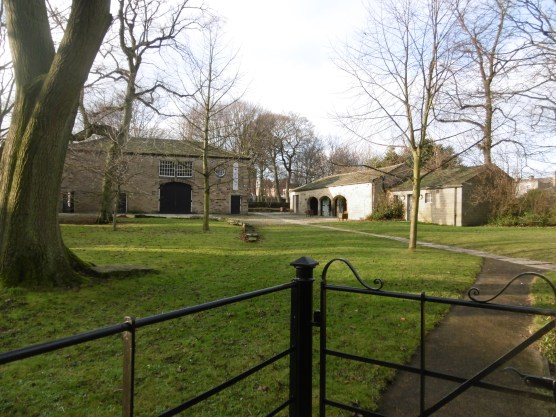 There are exhibitions in the two large outbuildings. ‘The Secret’s Out‘ concerns Charlotte Brontë connections with the Spen Valley area which she made the setting for her novel ‘Shirley’. 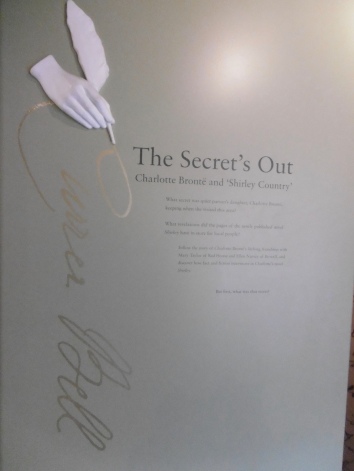 And you can also “Visit the fascinating Spen Valley Stories gallery housed in the restored 18th Century Cartsheds of Red House and discover the story of everyday 20th Century life in the Spen Valley, told through the lives, words and experiences of its people.“

Mary Taylor was a very interesting woman in her own right. Against all conventions she pursued an unusually independent way of life. She travelled in Europe with her brothers; went to school in brussels aged 24 and encouraged Charlotte to go too; she became a teacher in Germany causing comment among her friends as she taught boys not girls; she was an early emigrant in New Zealand where she established a successful shop and lived for 15 years; she was totally uninterested in typical female pursuits like embroidery; when she returned to Britain she published her radical views on women’s lives; she walked and climbed in the Alps with only women friends; and she wrote a novel of her own, ‘Miss Miles, or a Tale of Yorkshire Life 60 Years Ago’, about three young women and their struggles to find independence and happiness, and self-published it at the age of 73. Phew! What a woman!

2 comments on “The Red House, Gomersal”