It wasn’t easy to get a photograph of the exterior of the house. There is a visitor centre where you buy your ticket and then walk a few steps beyond to the house. Just about all the information was in German but from this I gleaned that Hauptmann had discovered the (“his”) island on his first trip in 1885. As a modern dramatist with a troubled private life he took shelter in Vitte between 1896 and 1901. Between 1916 and 1919 he stayed at the Lietzenburg. He had been awarded the Nobel Prize for Literature in 1912. During the early 1920s he was the Weimar Republic’s representative at the Haus am Meer (1921-1924). As a famous poet he bought his own summer residence in Kloster : ‘Haus Seedorn’ (1926-1943). His final journey to Hiddensee was in 1946 and he was looked upon as a ‘role model and unifying figure’.

The house is Arts and Crafts in style.

Postcard of the tea service in the entrance hall cabinet

“The living spaces of the Gerhart Hauptmann house are still in their original state, which means they were maintained and carefully rearranged the way Margarete and Gerhart Hauptmann left them in 1943.This was made possible by their friend, Pastor Gustavs, who took care of the house after the end of the war, no plundering took place, and many residents of the island who knew or had met the Hauptmans helped in the reconstruction of the house with their own memories of the place and its residents.
The bedrooms of Gerhart and Margarete, the servant rooms in the upper level and the hallway and on the ground floor belong to the old part of the house, are connected to the so called cross-way which connects the old house with the new part (underneath it is the wine cellar), the evening room and the large study. A spacious terrace with a view over the bay and the ocean completes the extension.” 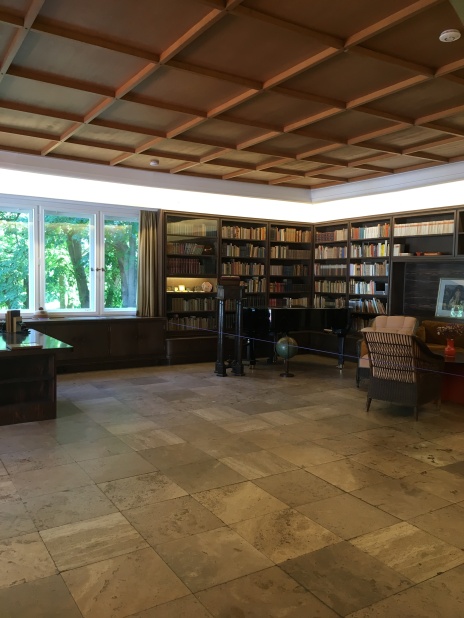 The Hiddensee library comprises about 1,000 books. Meetings and readings are held here occasionally.

Gerhart Hauptmann’s favourite wines are available from the shop

“To maintain the original state, no documentary displays were installed. Only on the entry veranda one can find an exhibition that documents Hauptmann’s connection to the island of Hiddensee. Here, you can find time cards that put events from the history of the world, and of literature and theatre, in context with Hauptmann’s life and work; they also show his travels, and a chronicle of his visits to Hiddensee. Visitors can see first editions and documents about friends and contemporaries like Albert Einstein, the Kruses, and Otto Gebühr. A showcase brings back his memories of a vacation together with the Manns in 1924 at the “House at the ocean”.
In the Gerhart Hauptmann house park, there are two showcases on the poet’s life and work. In a third showcase, different every year, artistic and outstanding theatre productions of Hauptmann’s work on German stages are documented.”

Unfortunately, I seem to have missed the additional showcases – maybe because they were all in German. Or maybe they were closed as there was an event going on whilst I was there. 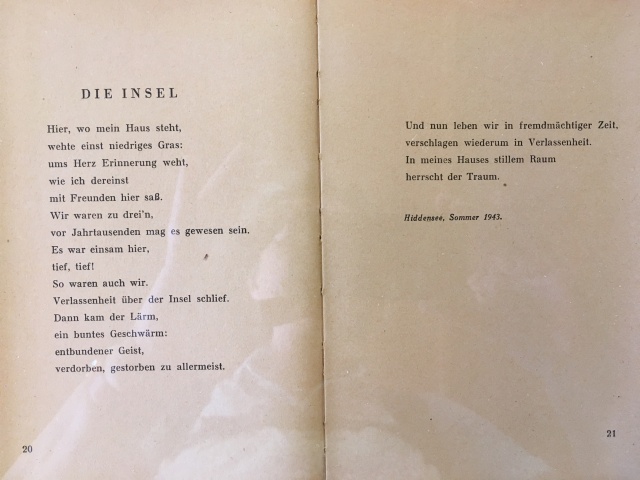