The most ‘commercial’ ancient monument along our route was the Ales Stenar preserved stone ship on the cliffs above Kåseberga harbour almost at the end of our first day’s walking. It is the largest preserved stone ship in Sweden and, on this occasion, we were not the only visitors. I say ‘commercial’ as there were probably about 20 other people on the site. There is no charge to view and the stones just sit there as they have for centuries (carbon 14 dating puts it at 500 – 1000 AD).

The stone ship was an early burial custom in Scandinavia, Northern Germany and the Baltic states. The grave or cremation burial was surrounded by slabs or stones in the shape of a ship.

Ale’s Stones consists of 59 boulders placed in the form of a 67m by 19m ship. More boulders apparently lie underground. The area itself is known as Kåsehuvud and it was only first recorded in 1624. It’s shown on early coastal charts and was probably a significant landmark from the sea for centuries. We could certainly see it in the distance long before we arrived at the site. 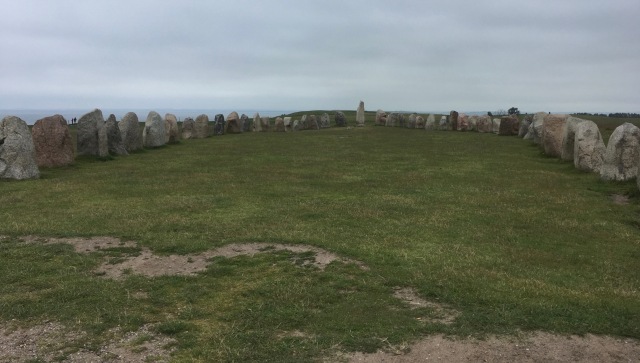 There was some restoration at the site  during the 20th century (1917 and 1956). A lot of this was very rough-handed with no archaeologists’ input. Archaeological interest has increased manyfold since the 1980s. We now know that the stones came from a relatively local quarry south of Simrishamn. Work is ongoing in the area and in particular with regard to the presence of other monuments that may have existed in the area.

On our second day we came across a stone circle with a boulder in the middle. This was just mentioned in passing in our walk notes as a meditation circle. There was no information board nearby. Could be new or could be old. 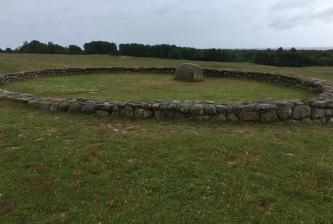 On our third day we came across this in Gislövshammar early in our walk. What should have been an interesting site is just a lumpy field. The information board (important enough to have a brief description in English) tells us that there is a unique grave mound, 24m in diameter, with a central stone within a circular wall of limestone slabs. the whole dates back to c2000BC and was in use in the area until the Viking times c1000AD. 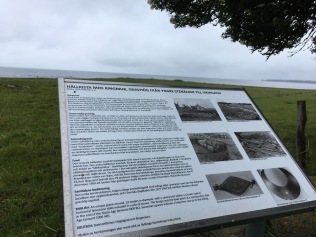 Towards the end of the third day’s walking and just outside Simrishamn we came across the most stunning site of the whole walk. This was considerably understated in our walk notes booklet :

“You are now close to Horsahallen, where you can see lots of old carvings on the rocks. There are big ones of ships, solar systems, axes, animals and humans.”

This was such an understatement that I wonder now whether it was a giant hoax :

We started to follow the trail to the other carvings but the muddy path defeated us. 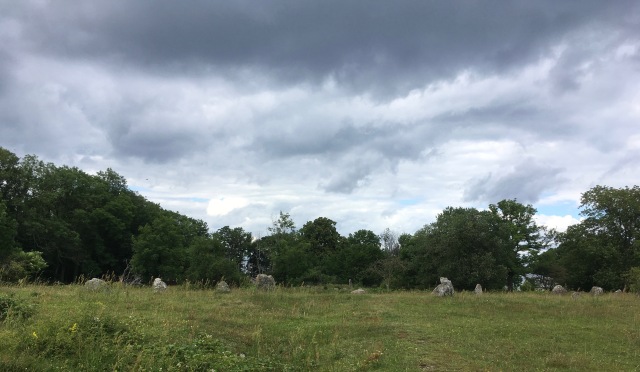 Not mentioned in our notes was Angakåsen (above). A prehistoric burial ground/stone ship/foundations of prehistoric buildings and graves all dating back to the Bronze Age (1000 to 500BC).

Just before reaching Kivik, our final destination, our route notes advised us :

“Just before you see Kiviksgraven (Kivik’s tomb) on your left side – which is marked with an ancient monument symbol on your map – the route turns right onto a small gravel path. Before you continue onto the gravel road it is worth your while to look at the tomb, Kiviksgraven.” 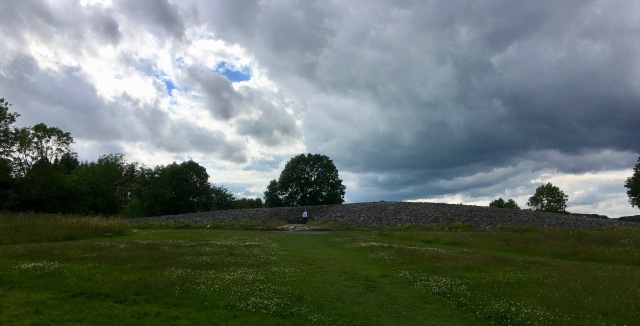 We decided to do so and here on private  ground – you access the site via a shop and cafe in a wooden hut – is a similar tunnel grave on much the same scale as Newgrange and Knowth in Ireland. A visit was definitely worthwhile.

And inside are carved stone slabs and description notes. 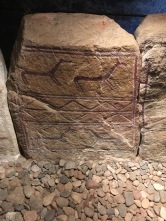 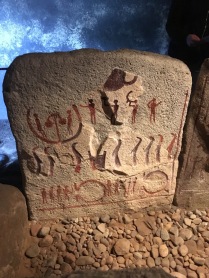 6 comments on “Ancient Sweden on the Osterlen Way”