The week before last, en route to Clare in Suffolk, where I stayed for a few days, I broke my journey at Woolsthorpe Manor in Lincolnshire.

Woolsthorpe was the birthplace of polymath and ‘Renaissance man’ Sir Isaac Newton (1643–1727).

“Woolsthorpe Manor looks like a typical Lincolnshire farmhouse – but Hannah Newton’s eldest son wasn’t interested in the life of a yeoman farmer in the 1600s. Instead Isaac Newton saw the apples fall in the orchard and asked why they always went straight to the ground.

That wasn’t all. This farmer’s son went first to school and then to Trinity College, Cambridge, and when the plague struck in 1665, came home to Woolsthorpe Manor where he did some of the most revolutionary maths and physics of his age.

The house is small but there’s a story of Isaac in every room, from his premature birth to his time as President of the Royal Society. You’ll be taken back to the seventeenth century, a time of civil war and experimental science, and discover how both of these affected Isaac Newton and made the work he did echo through the centuries.

Rooms are furnished simply, each one focussing on a different part of Isaac’s time at Woolsthorpe. As you walk round we hope you’ll be provoked to think about how this complex man saw his early surroundings and grew up to change the world.”

In winter access to the manor house is by guided tour only on account of the house being unheated. I had time before my tour began to have a quick look round the obligatory secondhand bookshop, to have a quick glance around the Science Centre and enjoy a warming bowl of soup and a cup of tea. 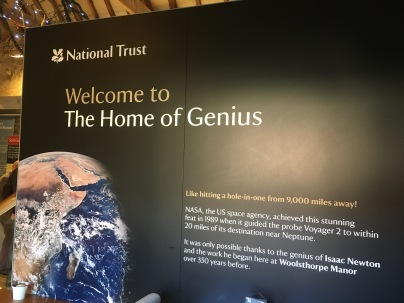 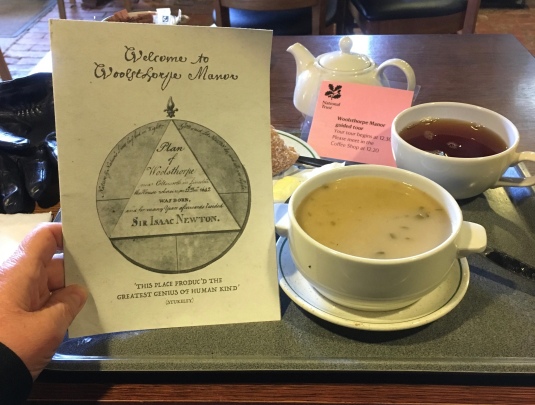 At 12.30 about half a dozen of us assembled in the Science Centre and were taken round to the house entrance by the friendly and knowledgable volunteer guide.

Introductions to Newton, his life, his home and his work took place in the Parlour where we were able to see original copies of the great man’s written works 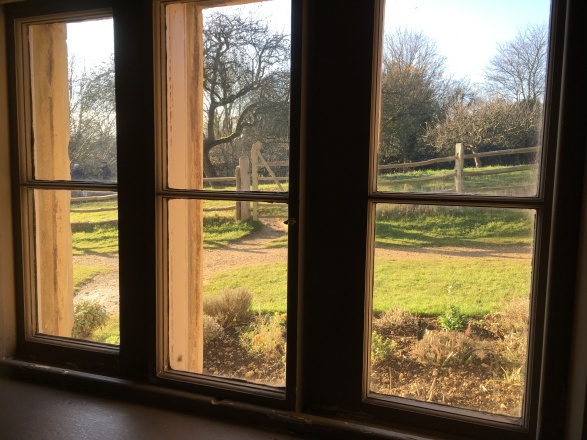 The Orchard viewed from Woolsthorpe’s Parlour

From the parlour we headed upstairs. We were shown Newton’s birthplace and the bedroom he later used as a study. He originally left Woolsthorpe to attend university at Cambridge but later, when the plague threatened the city, he returned home. 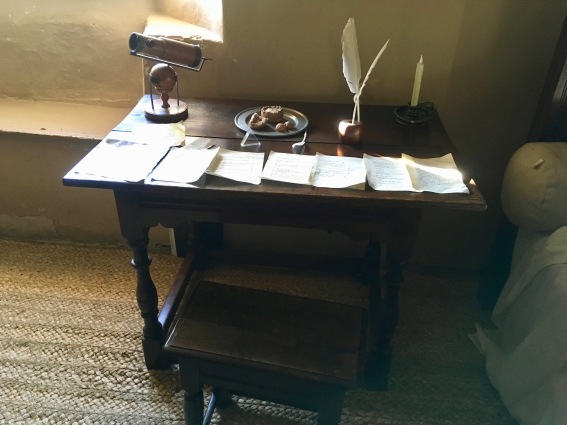 I was fascinated to notice that there’s a framed  print of Dürer’s ‘Melancholia’ above Newton’s bed. I recognised it straightaway following my recent visit to Somerset House.

The National Trust have tried (and succeeded) to furnish the house much as it would have been in the seventeenth century. Of course, no actual physical evidence exists.

A further upstairs room is devoted to Newton’s life and work before you are returned downstairs to the kitchen the main domestic area of the house. 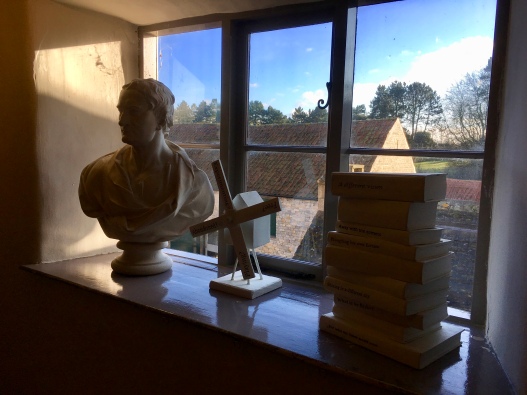 From the kitchen we headed outside into the beautiful sunshine and the visit concluded in the orchard where Newton’s apple still stands and produces fruit.

If you are travelling up or down the A1 through Lincolnshire and feel the need for a break and a wish to learn more about this fascinating man in beautiful and welcoming surroundings then I recommend the slight diversion: “follow the brown signs from A1. From Melton take B676 towards Colsterworth; 1 mile after Stainby turn left onto Old Post Lane, then left into Water Lane.” But always check the opening times on the website and there is a ‘phone number to ring to book onto a tour in advance at busier times.

12 comments on “Woolsthorpe Manor : The Home of Genius”