In addition to all the Mackintosh connections in Glasgow we found time to explore the permanent collections at both the Hunterian and the Kelvingrove Galleries; to visit Glasgow Cathedral and Necropolis and enjoy a session at Glasgow’s Annual Book Festival “Aye Write“. The festival takes place in the beautiful Mitchell Library, one of Europe’s largest public libraries, which has been one of Glasgow’s iconic landmarks since it opened in 1911.

END_OF_DOCUMENT_TOKEN_TO_BE_REPLACED

As a postscript to the previous post about the Casa Guidi I’m recording here my visit to pay my respects to Elizabeth Barrett Browning at The English Cemetery, Piazzale Donatello, Florence. END_OF_DOCUMENT_TOKEN_TO_BE_REPLACED

Before we realised quite how cold it was outside, last Sunday morning, we had decided to walk to Brompton Cemetery. Our route took us down Fulham Road, a part of London where I loved to window-shop when I lived and worked in London in the 1970s.

Brompton Cemetery lies parallel with the District Line Tube and right next door to Stamford Bridge Football Ground, where Chelsea FC play. There was no game last Sunday and we had discovered yet another peaceful haven for nature and contemplation. 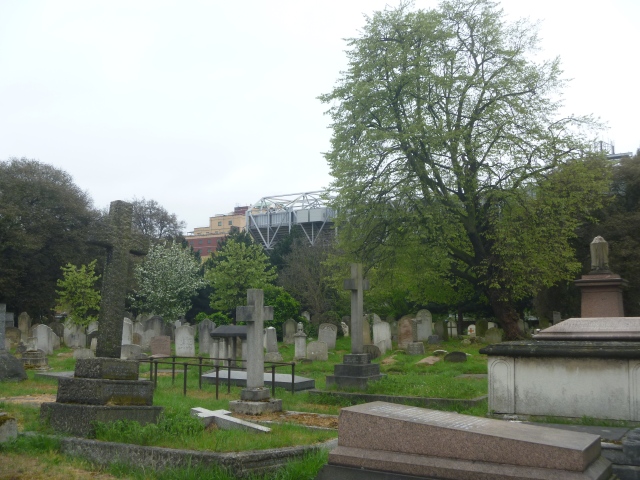 There aren’t many famous people buried there. Emmeline Pankhurst would probably be the best known. But we delighted in the atmosphere and inspecting graves and tombstones as we moved quite quickly through the cemetery. It was freezing cold.

Brompton Cemetery is the first and only cemetery to be in the care of the Royal Parks. It has what appears to be a thriving group of Friends who organise tours and events. It is one of the ‘Magnificent Seven’ cemeteries that opened in the countryside around London between 1833 and 1841. 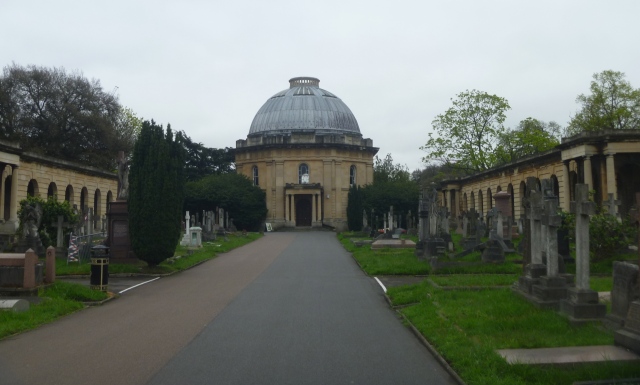 Designed by architect Samuel Baud ‘his inspirational concept was to create an immense open-air cathedral with a central ‘nave’ running to a ‘high altar’ symbolised by the domed Anglican Chapel. The prominent features in the cemetery are the Colonnades flanking the Central Avenue and the Great Circle, beneath which are the catacombs entered through impressive cast-iron doors’.

Here are some of the graves and monuments that caught our attention : 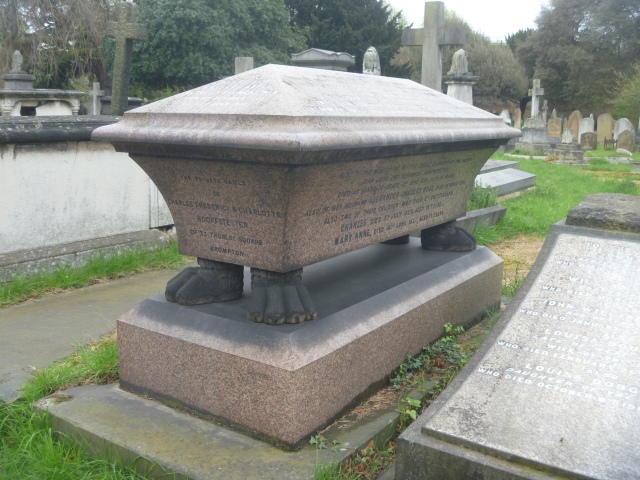 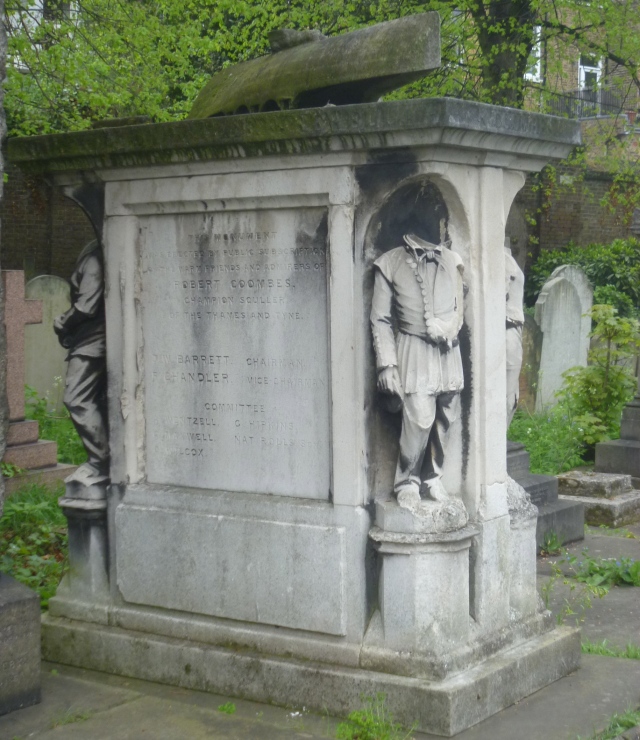 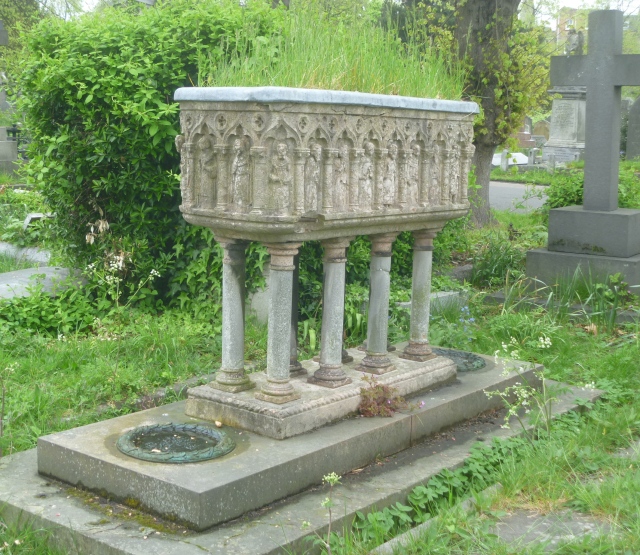 Tree-Like Monument of Samuel Sotheby – Founder of the Auction House 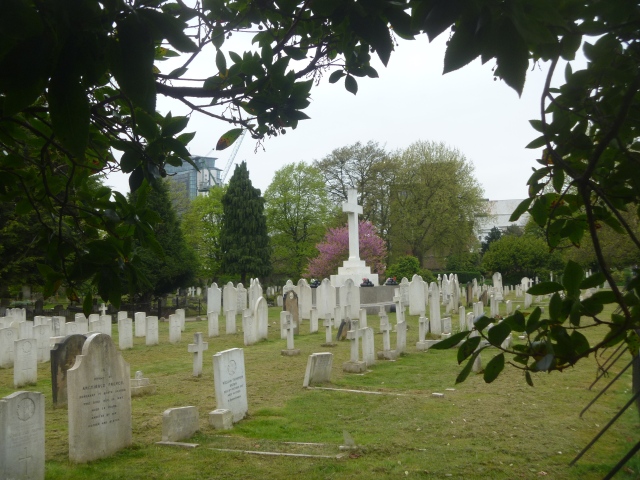 The Brigade of Guards and Commonwealth War Graves 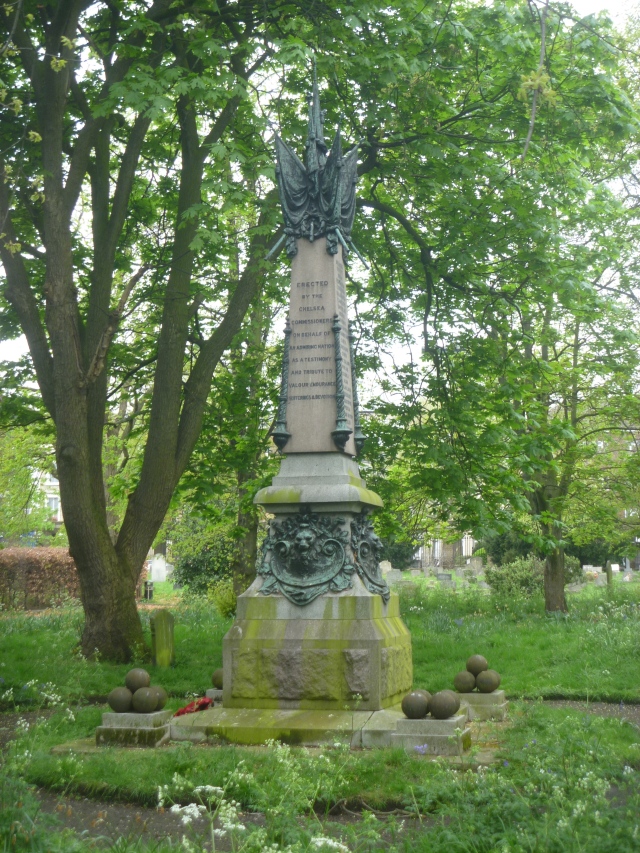 Where the Pensioners saw Active Service 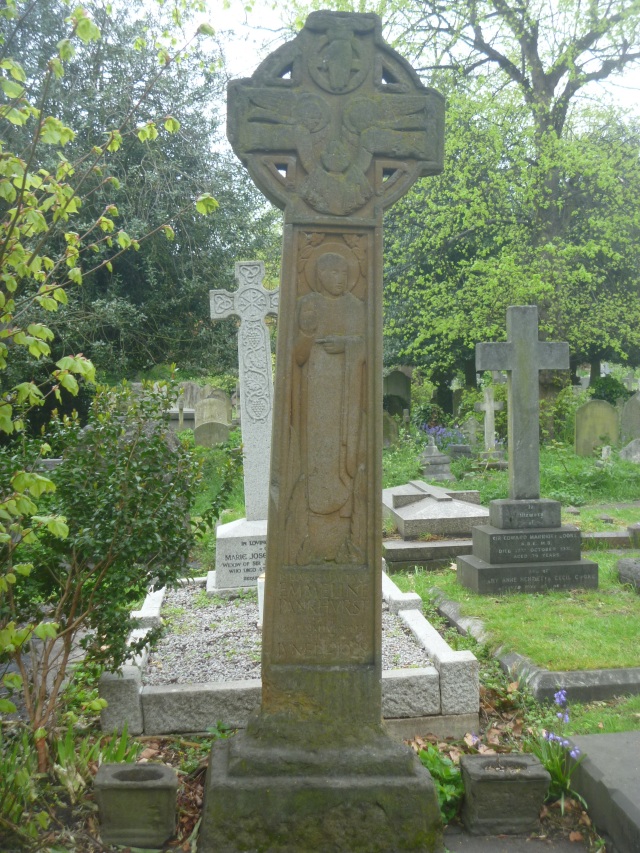 Having walked from the South Lodge to the North Lodge on Old Brompton Road we were very cold and made for a nearby cafe [which just happened to be The Old Troubadour] for warming drinks before the walk back to the hotel, collecting our bags and travelling by crowded tube to Kings Cross where I joined many London Marathon Runners travelling home.

One visit I had promised myself on this trip to Rome was pay to a call at the Cimitero Acattolico or, as usually known in English, The Protestant Cemetery at Rome.

“The cemetery is an open space among ruins, covered in winter with violets and daisies. It might make one in love with death, to think one should be buried in so sweet a place”

Percy Bysshe Shelley: Adonais: an elegy on the death of John Keats (1821)

I checked the website carefully before leaving home and made extra sure that Saturday 14 March was not a holiday and so after taking the train from Tivoli to Rome I made my way to the cemetery. When you emerge from the Pyramide Metro Station you can’t miss the huge Pyramid to Gaius Cestius and the cemetery is right next door: but you risk life and limb when crossing the roads to get to it!

Who, then, was Cestius,
And what is he to me? –
Amid thick thoughts and memories multitudinous
One thought alone brings he.

I can recall no word
Of anything he did;
For me he is a man who died and was interred
To leave a pyramid

Whose purpose was exprest
Not with its first design,
Nor till, far down in Time, beside it found their rest
Two countrymen of mine.

Cestius in life, maybe,
Slew, breathed out threatening;
I know not. This I know: in death all silently
He does a kindlier thing,

In beckoning pilgrim feet
With marble finger high
To where, by shadowy wall and history-haunted street,
Those matchless singers lie . . .

–Say, then, he lived and died
That stones which bear his name
Should mark, through Time, where two immortal Shades abide;
It is an ample fame. 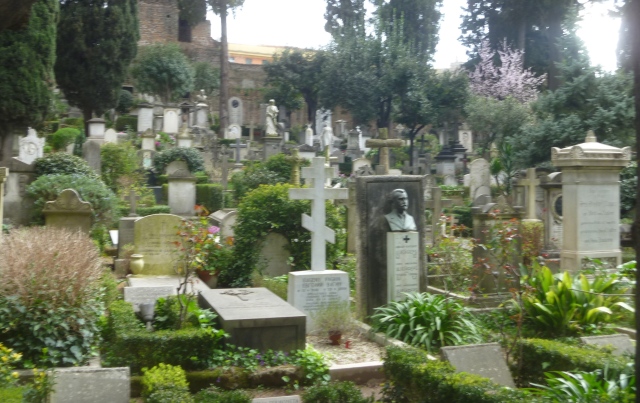 I was not disappointed. It’s truly an oasis of peace and tranquility. It’s divided into sections pre- and post- 1821; which is why Shelley’s ashes are not buried near Keats’s grave. 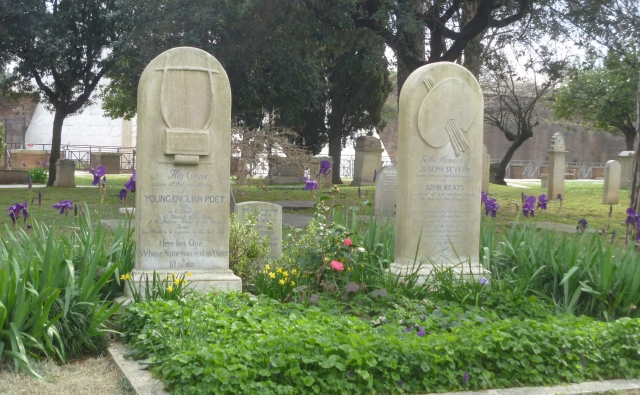 The Graves of Keats and Severn (and Severn’s son)

‘This Grave contains all that was mortal, of a YOUNG ENGLISH POET, who on his Death Bed, in the Bitterness of his heart, at the Malicious Power of his enemies, desired these words to be Engraven on his Tomb Stone’ [Words added by his friends Joseph Severn and Charles Brown]

There is an especially good chapter about the cemetery in Peter Stanford’s “How to read a graveyard“.

There’s a small bookshop and information office (above) near the entrance and the English guide helped me to pinpoint the grave of a little-known Australian author whose books I enjoy : Martin Boyd. 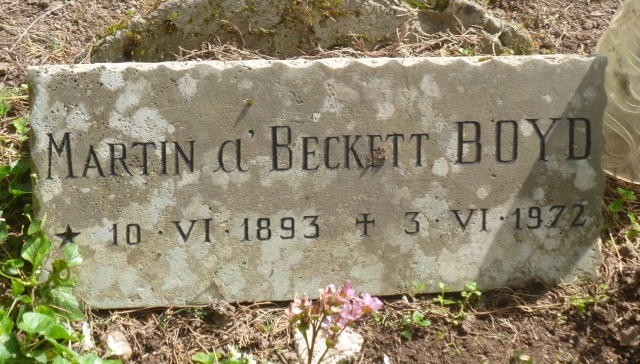 Even though the Protestant Cemetery was high on my list this visit I also hoped to walk some of the famous Appian Way, the Roman road that connects Rome with Brindisi in southeast Italy. I read in my guidebooks how to get there and which were the best parts to see then noticed in small inset box this note : Enjoy Rome offers a 3-hour bus and walking tour of the Appia Antica … Call for tour times. 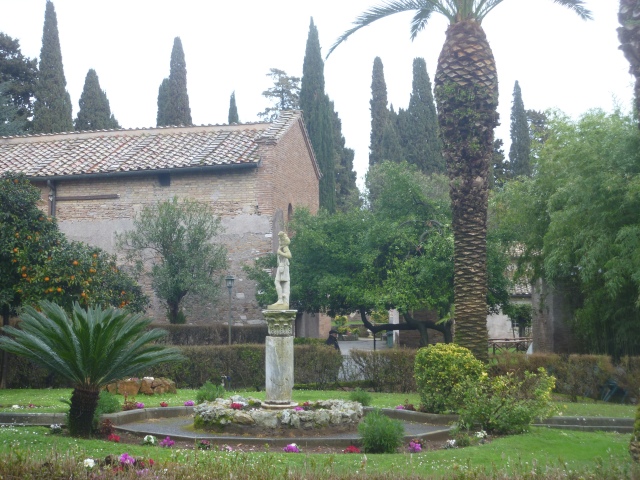 I discovered that the Enjoy Rome office is very near to Termini Station so I bought a ticket for the Tuesday 10am departure. The first stop of the excursion is at The Catacombs of San Callisto. We were able to descend into a maze of tunnels and see various types of burial chambers with and without mural decorations.

“Ancient Roman law forbade burials, regardless of religion, inside the city walls. San Callisto is one of the most famous of over 60 catacombs in the city area. There are multiple levels of 1900 year old hand-dug corridors, past a mind-boggling number of tomb niches. Christian-themed inscriptions and frescoes, often endearingly simplistic but carrying strong messages of faith, are everywhere in the catacombs.” [Adapted from Frommer’s Rome Day-By-Day] Several Popes were entombed here.

“The Crypt of St. Cecilia: the popular patron saint of music. Of a noble Roman family, she was martyred in the 3rd c. and entombed where the statue now lies. She was venerated in this crypt for at least five centuries. In 821 her relics were transferred to Trastevere, in the basilica dedicated to her.

The statue of St. Cecilia is a copy of the celebrated work sculptured by Stefano Maderno in 1599.
The crypt was all covered with mosaics and paintings (beginning of the IX Century). On the wall, near the statue, we see an ancient painting of St. Cecilia in an attitude of prayer; lower down, in a small niche, is a fresco representing Christ holding a Gospel. On the right side is the figure of St.Urban. On the wall of the shaft is the painting of three martyrs: Polycamus, Sebastian and Quirinus.” [Source]

No photography is allowed in the catacombs but I snapped a couple of postcards showing what it’s like down in the depths!

Back at the Cemetery the cats are looked after by volunteers and even have their own website. 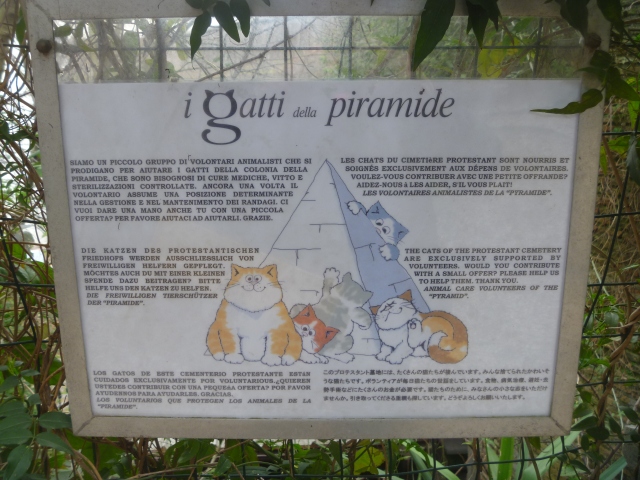 Empty Basket – Where can they be? 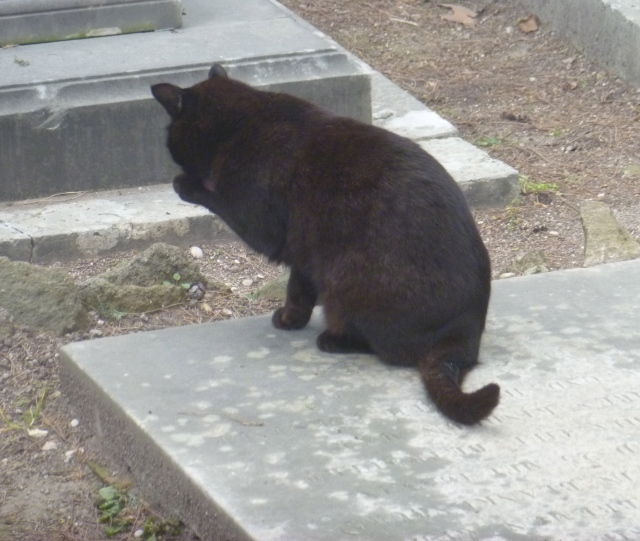 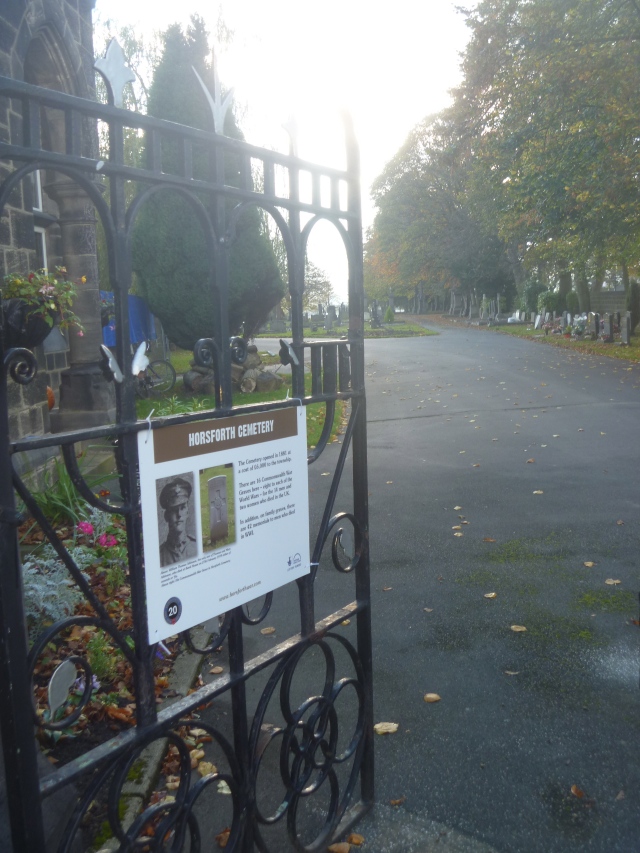 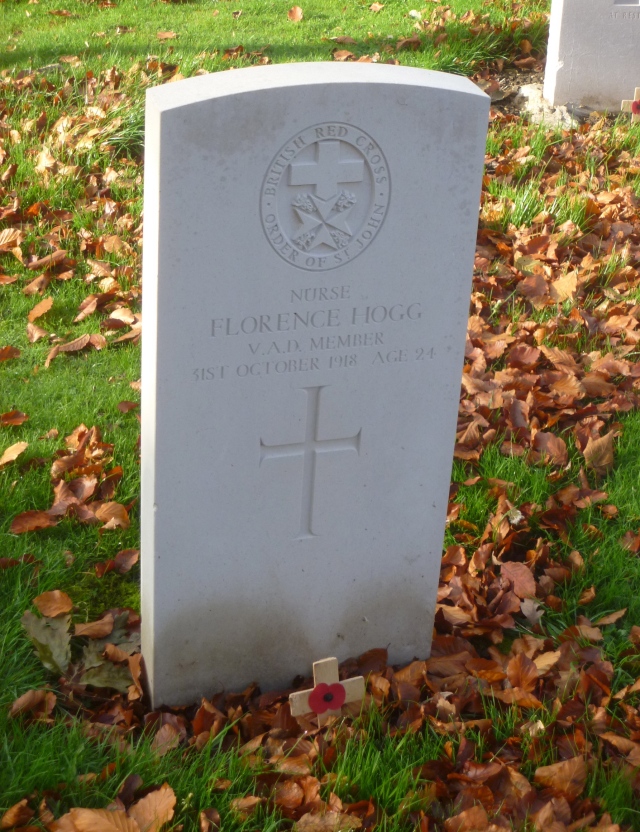